Although Hellertown borough officials conducted a poll two years ago to determine when residents would prefer that Trick-or-Treat be held–with council members opining that the event should forevermore be held according to the majority’s wishes–one Hellertown councilman told his colleagues Monday he thinks the date should be reconsidered.

Since 2019, Trick-or-Treat has been held from 6 to 8 p.m. on Oct. 31 in both Hellertown and Lower Saucon Township, regardless of what day of the week Halloween falls on. 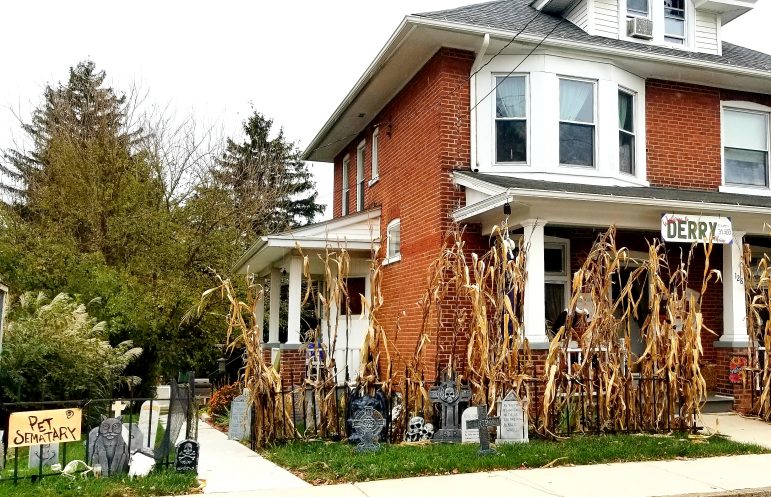 A home on Northampton Street in Hellertown borough is elaborately decorated according to “Pet Sematary” theme for Halloween in 2019. That year marked the first time that Trick-or-Treat was held based on the results of a poll in which a majority of residents said they would prefer that it be held on Halloween night. The poll was conducted by the borough.

Councilman Gil Stauffer questioned both the adherence to Oct. 31 and holding Trick-or-Treat in the evening, when he said darkness could be a problem.

“If it was on a Sunday before Halloween, and it was from the hours of 4 to 6, it became a social event, at least in Mountainview,” said Stauffer, with reference to the large residential neighborhood in the borough’s southeastern quadrant.

“If you hold it on Halloween in the evening, it’s dark and you don’t have that social element to it,” he lamented.

With the exception of council president Tom Rieger, no one else on council seemed eager to take up the subject of Trick-or-Treat’s timing, which has been the subject of frequent and sometimes impassioned discussions in recent years.

“The people have spoken on this one, and Halloween from 6 to 8 it is,” Rieger said.

He added that personally, he preferred when it was held on a Sunday afternoon.

“When it’s on a Friday or Saturday night it’s perfect, but unfortunately it doesn’t work out like that every year,” Rieger noted.

There was no motion made to change the date or time of Trick-or-Treat 2021, and council opted not to take any action on Stauffer’s suggestion.

Thus, as things stand, Trick-or-Treat in Hellertown borough will be held from 6 to 8 p.m. on Sunday, Oct. 31, 2021. Typically, Lower Saucon Township officials follow Hellertown’s lead when voting to approve the timing of Trick-or-Treat in the township.

“We can always talk about it, but that doesn’t mean we’re going to change it,” said councilman Mike McKenna, at the conclusion of the discussion.

In other business, council voted 7-0 to approve a motion waiving the $5 yard sale permit fee for yard sales held as part of a Community Yard Sale that is being planned for Saturday, June 5.

Borough manager Cathy Hartranft didn’t name the event’s organizer, but in recent years it has been sponsored by Trish Husted of Coldwell-Banker Hearthside, Realtors in Hellertown.

Due to the coronavirus pandemic, no Community Yard Sale was held last year, although some residents held their own sales.

Hartranft said this year’s sale will be held according to social distancing protocols and  with other public health guidelines in place, although since the sales will be held on private property it will presumably be up to the individuals who are holding the sales to police those protocols.