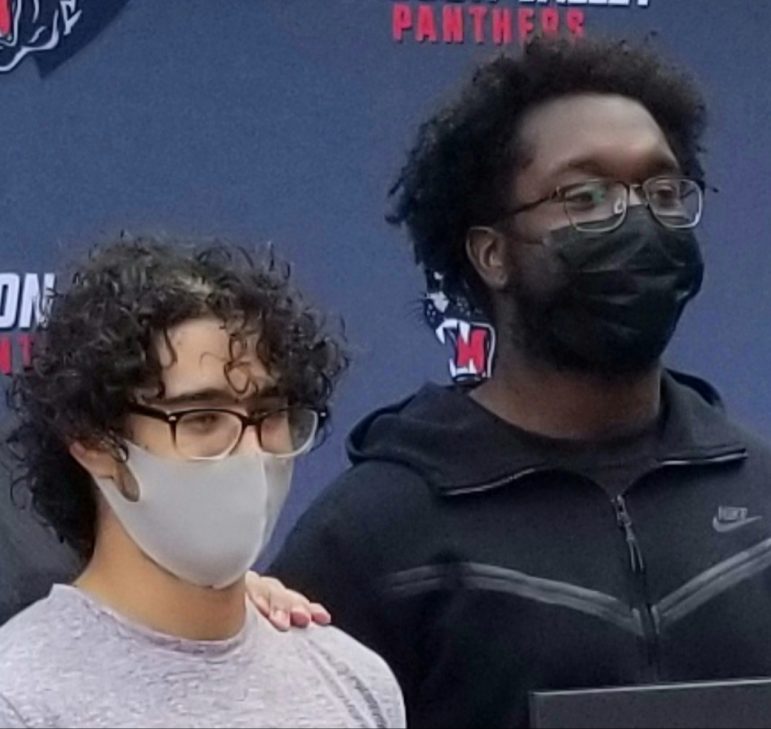 Saucon Valley senior David Osman, right, was recognized for his heroism and quick thinking during a ceremony at the high school Thursday. On April 29, Osman was a passenger in a car driven by fellow student Oscar Barahona, left, when Barahona suffered a seizure and lost consciousness on Depot Street near the Hellertown Pool. Osman was able to bring the vehicle to a stop without anyone being hurt. Mayor David Heintzelman proclaimed May 6, 2021 “David Osman Day” in the borough.

David Osman, a member of the school’s football team, was a front-seat passenger in Oscar Barahona’s car when Barahona suffered a seizure and blacked out on Depot Street near the Hellertown Pool.

At the same time that the car started to veer out of control, a woman and a child were in the process of crossing the street, directly into its path.

Osman, who Barahona called “very chill,” was exactly where he needed to be in that moment.

He grabbed ahold of the steering wheel, managing to move the car away from the imperiled pedestrians and toward the curb, where it crashed on its axles.

The car was totaled, but miraculously no one was injured.

“My first thought was, ‘I’ve got to align the vehicle,'” Osman recalled following an award presentation that was held in his honor at Saucon Valley High School Thursday morning.

After that, he realized that he needed to somehow stop the out-of-control vehicle.

So many things happened so fast that Osman seemed a bit unsure about the precise timing of his movements during those frightful few seconds, but he clearly remembered that he “was focused on looking up.”

“If I was by myself, who knows (what could have happened),” Barahona said solemnly.

After the car crashed, the witnesses called 911 and borough police responded quickly.

Barahona, who said he has had seizures in the past, suffered no lasting effects from the medical emergency.

He and many of Osman’s friends from the football team were present for Thursday’s ceremony, during which Hellertown Mayor David Heintzelman proclaimed May 6, 2021 “David Osman Day” in the borough.

“We wanted to bring the entire school out and they probably all would have wanted to, but we wanted to keep this intimate for some specific reasons,” Heintzelman said. “We wanted to show you the love from your closest friends.”

Osman, who has his driver’s license and was joined by his proud parents at the event, seemed a bit overwhelmed by all the attention.

That didn’t surprise those who know him well, including Athletic Director Bob Frey.

Osman plans to attend Wilkes University in the fall, where he will major in nursing and play football.

Barahona, who said he doesn’t remember anything that happened before he woke up in an ambulance, is planning to major in sociology and social work at Indiana University of Pennsylvania.

“He’s one of my best friends,” said Barahona. “Hopefully one day I can pay him back.”

Thanks to his friend’s lightning reflexes and alertness, he’ll have the chance to do that. 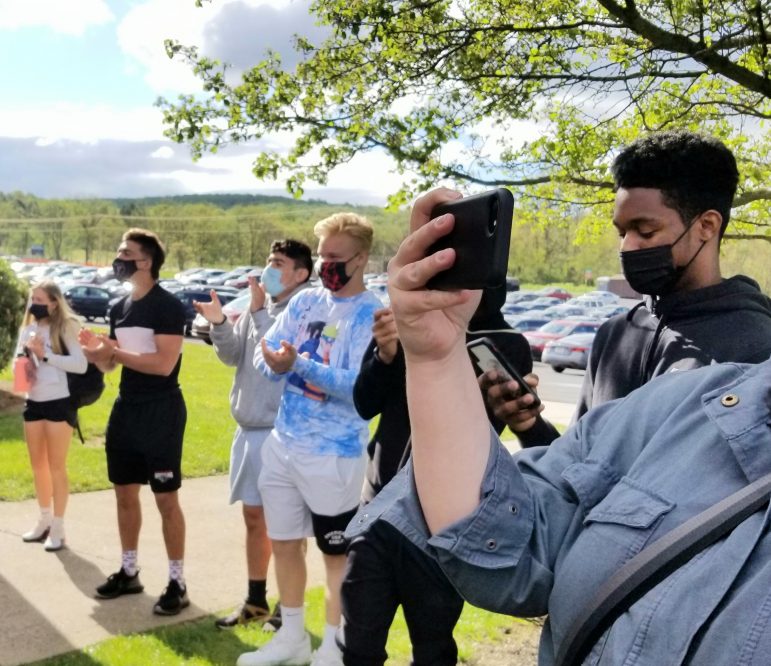 Some of David Osman’s football teammates were on hand to cheer for him at the surprise ceremony outside Saucon Valley High School Thursday. 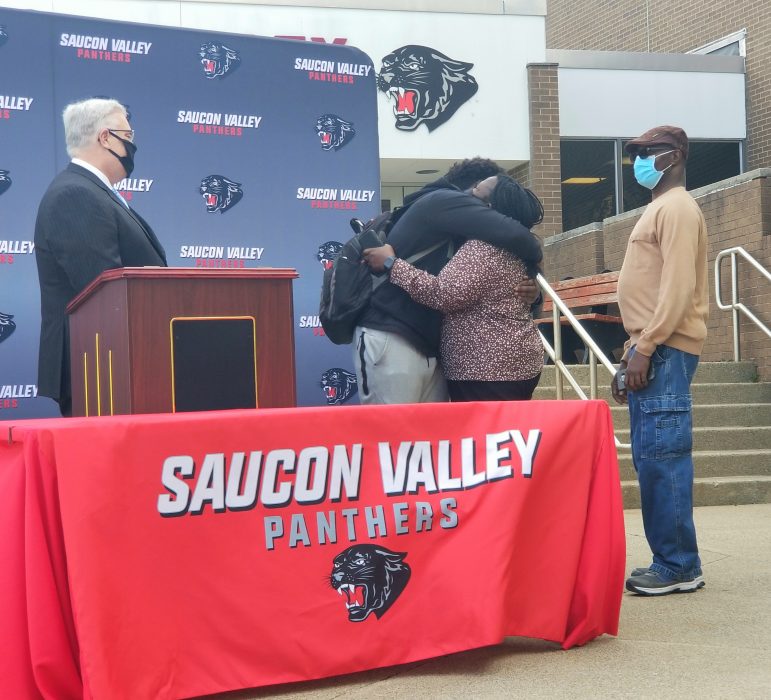 David Osman hugs his mother as his father looks on. The Osmans, of Lower Saucon Township, beamed with pride during the ceremony for their son. At left is Hellertown Mayor David Heintzelman, who presented David with the day’s proclamation. 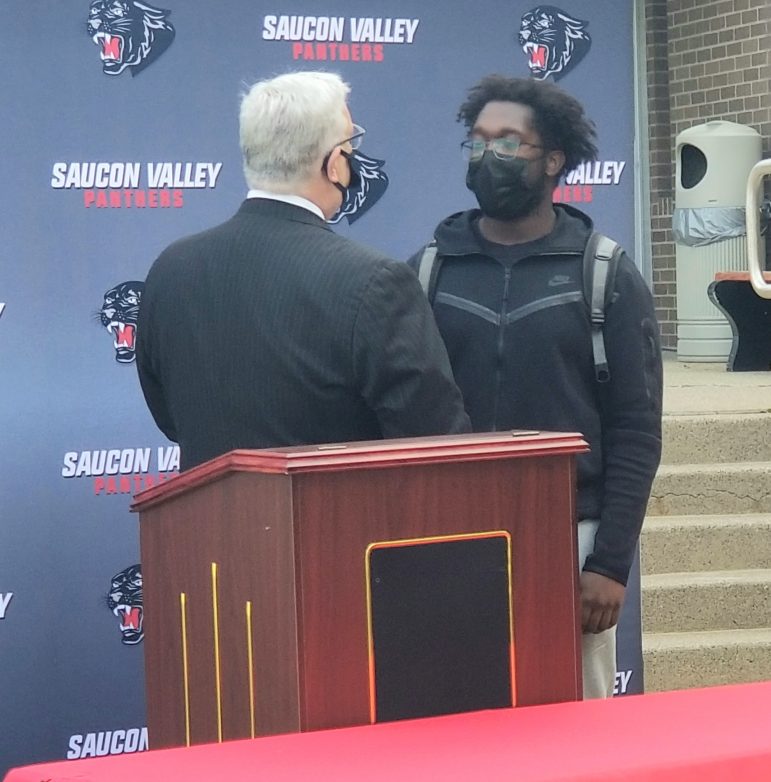 Hellertown Mayor David Heintzelman thanks David Osman for averting what could have been a tragedy in the borough. 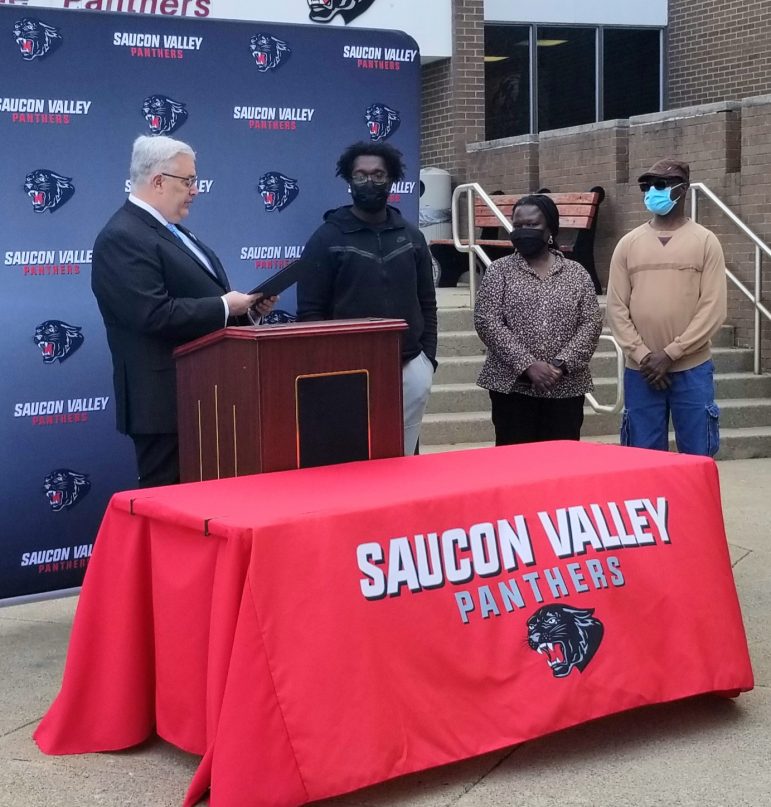 Hellertown Mayor David Heintzelman reads from the proclamation declaring May 6, 2021 “David Osman Day” in the borough. 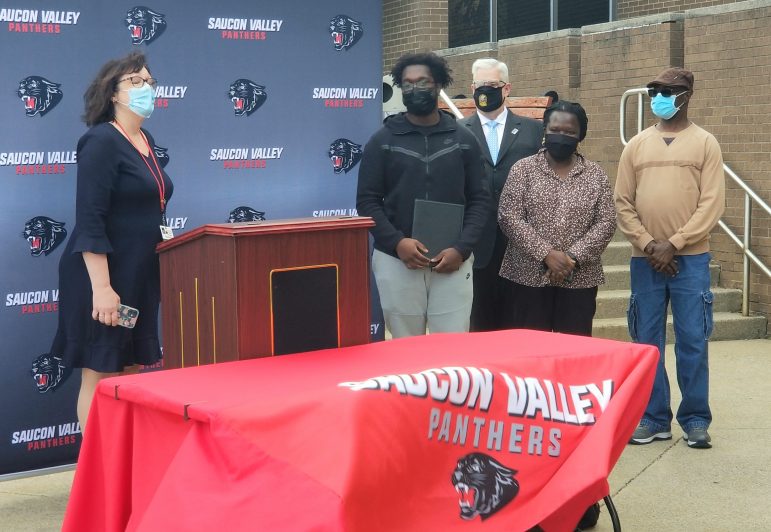 Saucon Valley High School Principal Tamara Gary spoke highly of senior David Osman during Thursday’s ceremony, which was attended by family, friends, members of the local media and others. 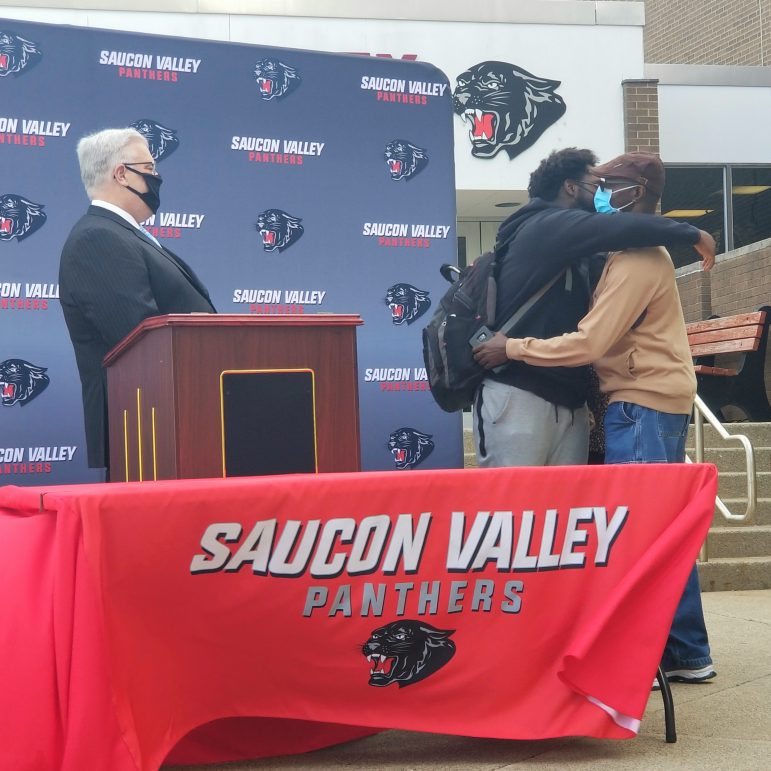 David Osman gives his father a hug. The Saucon Valley senior football player is being credited with possibly saving several lives April 29, when his friend Oscar’s car careened out of control on Depot Street in Hellertown, near the pool. 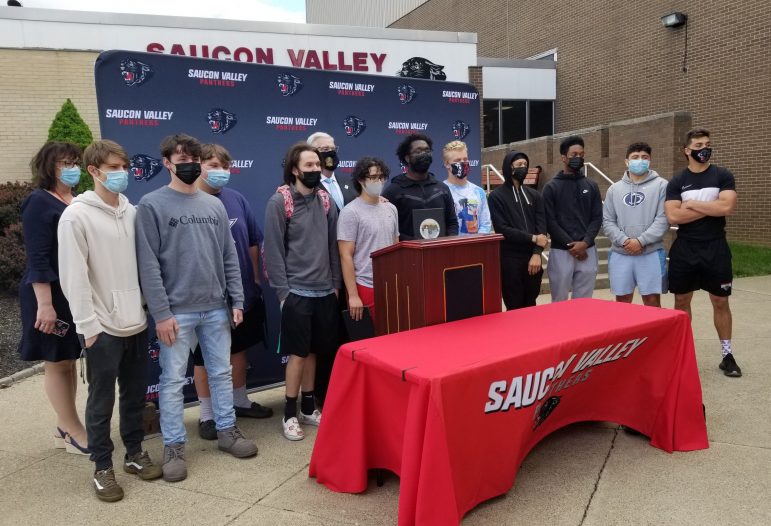 The Osmans, Mayor David Heintzelman, Principal Tamara Gary and members of the Panther football team pose for a photo with their friend and hero David Osman on “David Osman Day,” May 6, 2021, outside Saucon Valley High School. 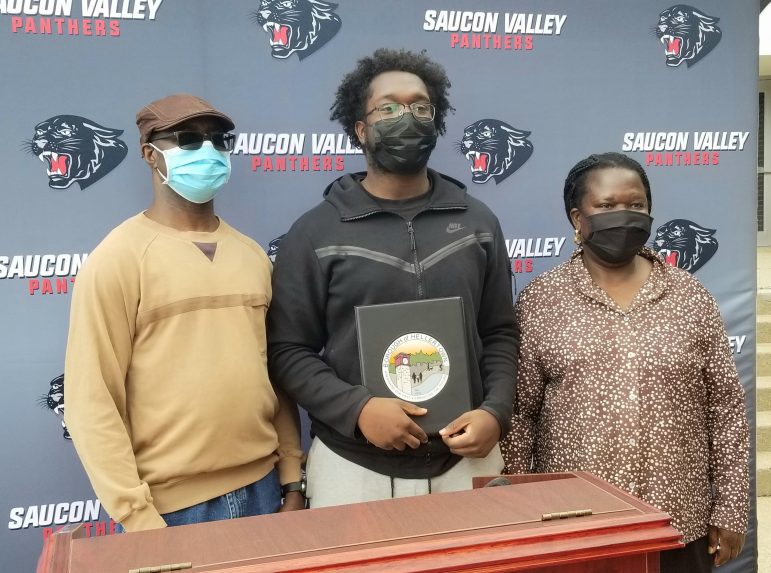