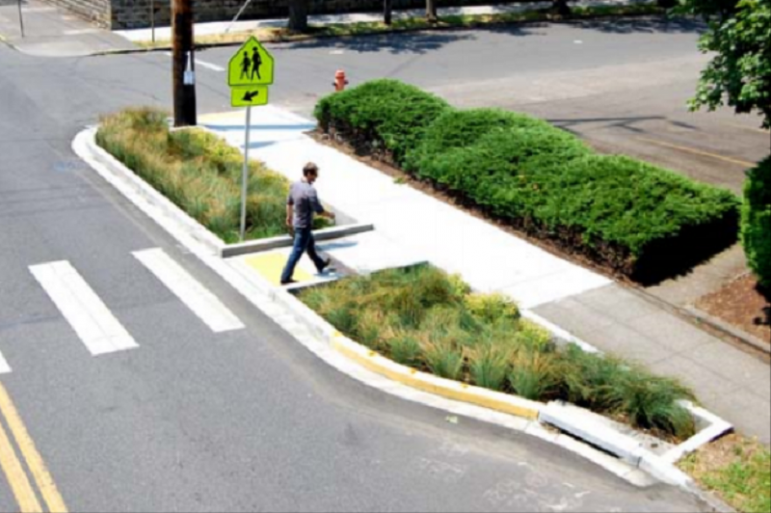 A sidewalk “bumpout” similar to this one is being installed at Main Street and Thomas Avenue in Hellertown as part of a pedestrian safety initiative.

A project that will help improve pedestrian safety along Main Street in Hellertown is proceeding well ahead of schedule, likely aided by the favorable weather for construction projects that has prevailed since work began on it in early April.

Hellertown Borough Manager Cathy Hartranft said Sunday that the entire project is expected to be completed by mid June, about two months ahead of the original estimated completion date.

“We are very happy with the speed in which the contractor completed this project considering the significant traffic on Main Street, and sincerely thank the public for their patience and understanding during construction,” she said.

She said last week that some night work that was necessary as part of the project has all been completed. 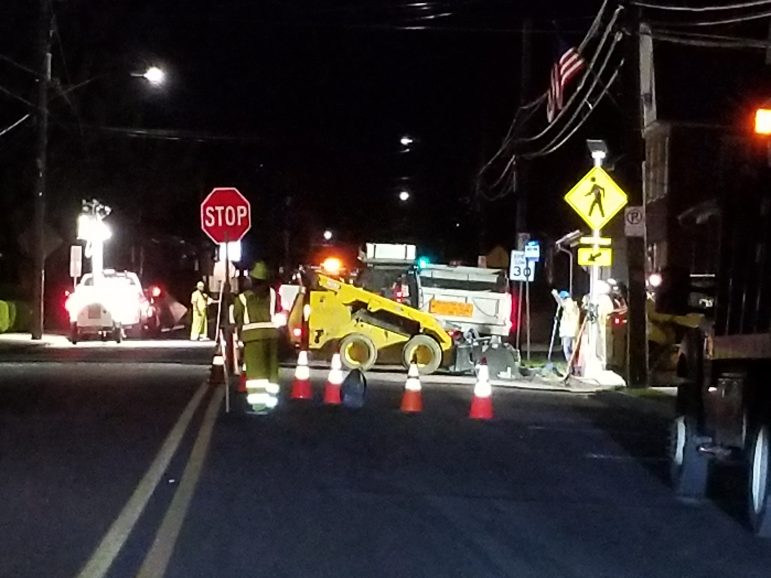 Above, construction crews work on a pedestrian safety project at the intersection of Main and Clarke streets in Hellertown last week. Borough manager Cathy Hartranft said Sunday that the entire project is expected to be completed by mid June, about two months ahead of schedule. She previously said that all night work related to the project has now been completed. Several residents reported to Saucon Source last week that noise from the night work was disruptive to their quality of life.

Hartranft provided the following schedule for the remaining work:

In addition to the rapid-flash crosswalks, handicapped-accessible ramps and stamped crosswalks are being installed at all of those intersections; the Main Street crosswalk at Hampton Avenue is being moved slightly to the south; and a sidewalk bumpout and bus shelter are being built on the east side of Main Street at Thomas Avenue.

Funding for the project was provided by the Pennsylvania Department of Transportation (PennDOT) in the form of TASA (Transportation Set Aside) funds.

“These funds may be for on and off road pedestrian and bicycle facilities, infrastructure projects for improving non-driver access to public transportation and enhanced mobility among a number of other improvements,” Hartranft said.

Pedestrian safety on Rt. 412 in Hellertown has been a concern for many years, and with increasing traffic volume, officials have been tasked with finding ways to improve it.

Charges of homicide by vehicle and involuntary manslaughter were filed last month against Lower Saucon Township resident Kenneth M. Schuebel, 57, in the accident.