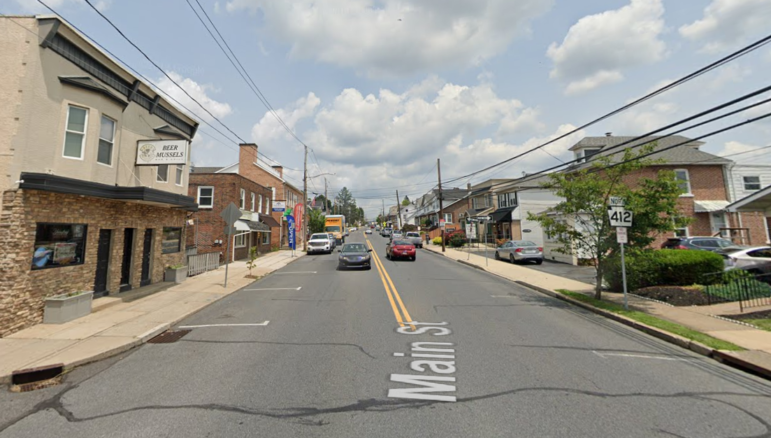 Pictured: The 1200 block of Main Street (Rt. 412) in Hellertown borough, looking north, in July 2019. A pedestrian was struck by a car in this block on Saturday afternoon and later died, according to the Lehigh County Coroner’s office.

A pedestrian who was struck by a vehicle in the 1200 block of Main Street in Hellertown around 4 p.m. Saturday died at St. Luke’s Hospital in Fountain Hill yesterday, according to several news reports that cite the Lehigh County Coroner’s office.

The woman has been identified by the coroner as Frances Miller, 74, of Hellertown.

The coroner’s office said an autopsy will be conducted Tuesday in order to determine the cause and manner of Miller’s death.

On Sunday, borough police said the driver of the vehicle that struck Miller stopped at the scene and was cooperating with their investigation.

The crash caused Main Street (Rt. 412) to be closed and traffic detoured around the accident scene for an extended period of time.

Anyone with information about what may have happened or who may have witnessed the accident is asked to contact Hellertown Police by calling 610-838-7040 or emailing jdonato@hellertownpd.org.

Police said they are also seeking video of the crash from anyone who may have an exterior surveillance system in the area where it happened, which was near Beer Mussels.