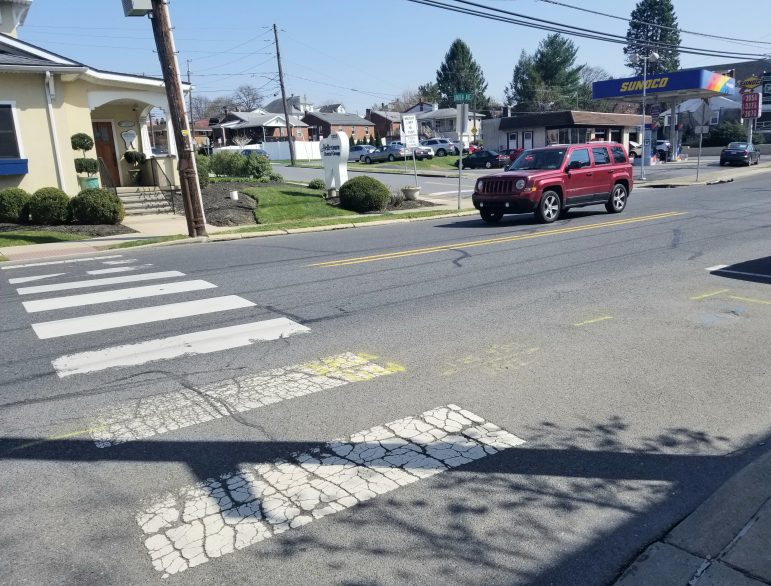 A 57-year-old Lower Saucon Township man has been charged in a fatal pedestrian accident that occurred at this crosswalk in the 1200 block of Main Street in Hellertown borough on June 20, 2020. Kenneth M. Schuebel is accused of being high on methamphetamine and other drugs when he struck 74-year-old Frances Miller of Hellertown as she tried to cross the street.

More than nine months after 74-year-old Frances Miller was killed crossing Main Street in Hellertown, a local man has been charged with homicide by vehicle in her death.

Kenneth M. Schuebel, 57, of the 2000 block of Leithsville Road, Lower Saucon Township, is accused of driving while high on methamphetamine and striking Miller as she attempted to cross the road in a crosswalk between Bachman Street and Linden Avenue.

In a criminal complaint filed in Northampton County District Court earlier this week, Hellertown Police Officer Dominick Fragano said he was called to the scene of the accident at 3:57 p.m. on the afternoon of June 20, 2020.

After arriving with Ofc. Kevin McCartney, Fragano said he encountered a man–later identified as Schuebel–who had been operating the GMC Envoy that struck Miller.

Fragano said police rendered aid to Miller as they waited for EMS to arrive. They also contacted Pennsylvania State Police to request that an accident reconstruction team be sent to the scene, he said, “due to the severity of traumatic injury” Miller had suffered.

He said he also learned of the possible existence of video surveillance footage of the crash at Hellertown Dental Group, which is adjacent to the intersection where it occurred.

When asked to provide a blood sample, Schuebel consented and was taken to St. Luke’s Hospital for a blood draw that was later analyzed for the presence of drugs and/or alcohol, the criminal complaint indicated.

Fragano said he later interviewed Schuebel at Hellertown Police headquarters, where he “gave a voluntary statement regarding his version of the accident.”

The investigation continued from that point, taking a turn when Miller died from injuries she suffered in the accident on June 21.

A crucial piece of evidence, Fragano wrote in the affidavit of probable cause, was the video surveillance footage he obtained from Hellertown Dental Group.

The following excerpt is from the affidavit:

Fragano wrote that after the vehicle struck Miller, she was thrown onto its hood, fell off it and rolled “into the east side curb, striking her head and body.”

“The video also showed there was very little action on Mr. Schuebel’s part as an operator of the vehicle to stop or avoid the collision with Mrs. Miller before impact with her,” he said.

When the results of the toxicology tests were returned, Fragano said they showed there was 32ng/mL of amphetamine, 274 ng/mL of methamphetamine and 8.0 ng/mL of THC Carboxy Delta-9 in the blood sample taken from Schuebel after the accident.

Given the toxicology test results, the results of the state police accident reconstruction, the video surveillance evidence and the results of his investigation, Fragano said there was “probable cause to conclude that defendant Kenneth Schuebel was operating the GMC Envoy while his ability to do so was impaired by the consumption of…controlled substances, which therefore caused the crash resulting in the death of Frances Miller.”

According to court records, Schuebel is charged with:

The criminal docket for Schuebel’s case as of Wednesday indicated that he is awaiting a preliminary hearing.