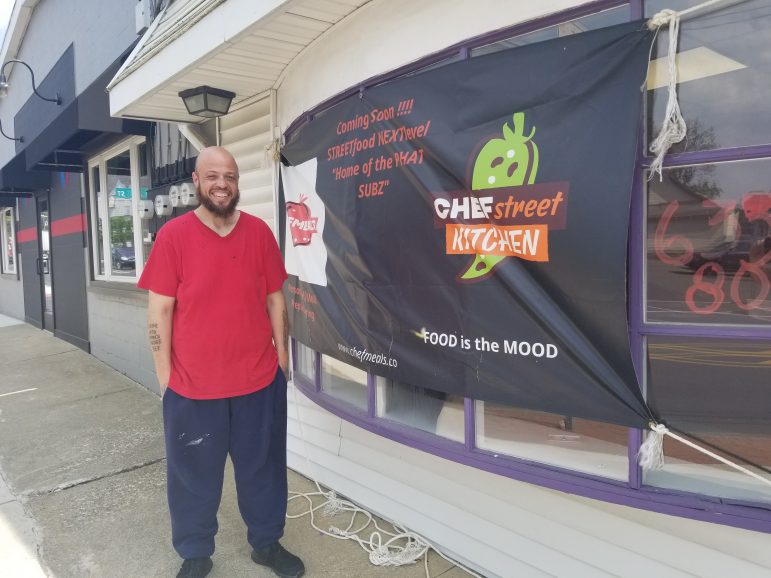 Joe Stout, owner of ChefStreet Kitchen and ChefMeals, stands outside his business’s new location at 56 W. Water Street in Hellertown borough. Stout said he hopes to reopen his takeout and meal prep business July 1. He previously partnered with Dewey Fire Company No. 1 as their in-house caterer. Stout is also a weekly vendor at the Saucon Valley Farmers’ Market.

An already-established Hellertown food business is beginning a new chapter in a fresh location. ChefStreet Kitchen, which operated out of Dewey Fire Company until recently, is in the process of reopening in a storefront at 56 W. Water Street in the borough.

Chef-owner Joe Stout said he decided to move to Water Street in order to pursue new opportunities after his six-month lease agreement with the fire company concluded.

The space he’s in the process of renovating was formerly home to I’m Hungry Food Truck & Depot, which closed last year after a partnership with a Hellertown tea shop ended.

Stout said his tentative opening date for ChefStreet Kitchen is Thursday, July 1, and that his menu will look a lot like his bar menu at Dewey did. For example, he said it will include his signature line of PHAT subs and his Boardwalk potatoes.

The prepared meals that are part of his locally-sourced and sustainable ChefMeals line will also be sold out of the new location, but instead of offering dozens of choices each week, Stout said he will instead offer two or three different prepared meal options daily.

“I don’t have the space to offer the full line,” he said, because his new location is smaller. “Now it’s more of an actual retail location.”

Stout said he plans to introduce exciting flavors from south of the border by offering tacos “probably every day” as well as other Latin menu items. Every Saturday he wants to sell a traditional pork roast and empanadas. Other regular menu features will include Southern-style barbecue, fried chicken and waffles, Chinese dumplings and cheesy logs.

For dessert, patrons will be able to purchase Bam’s Carrot Cake, which was being made at Dewey Fire Company by Stout’s friend Paula McKinnis, who was one of several culinary contributors sharing the kitchen as part of an incubator-type arrangement.

Stout said the other culinarians will also now be based out of the Water Street location, which will feature an open production area in the front room so guests can see their food being made. With limited space, there won’t be much seating available inside the eatery, but Stout said he hopes to add a couple of tables outside on the sidewalk in front.

Since the business will be takeout-oriented, customers will be able to order their food online, and eventually Stout said he will offer GrubHub as well as his own delivery option.

Not one to sit still for very long, in addition to opening his new restaurant Stout has a busy summer planned as both a mentor with the WorkForce program and an instructor at Northampton Community College. At NCC, he will be teaching three classes for lifelong learners: Healthy Snacks, Healthy Lunch Options and Healthy Dinner Options.

Every Sunday he will continue to have a stand at the Saucon Valley Farmers’ Market, which is open from 9 a.m. to 1 p.m. next to the Hellertown Area Library.

“I believe in family time,” he said.

Stout also has a GoFundMe campaign set up for his business, which he established after his relationship with the fire company ended last month. All donations, he says, will help fund his operational and startup expenses in the new location.