Nearly a year after a court of common pleas overturned a rare mayoral veto of a rezoning ordinance, Hellertown officials and property owners are still battling over the zoning status of a portion of a property on Easton Road.

A group of nearby property owners are appealing the controversial rezoning of a nearly five-acre portion of the property at 1527 Easton Road from R-1 to R-2; a zoning classification that allows for higher density housing to be built on the land.

The neighbors’ appeal triggered a hearing which began at the May 19 zoning hearing board meeting. Following nearly four hours of deliberation, the hearing was adjourned. It is scheduled to resume at the board’s June 16 meeting at 6:30 p.m. in Borough Hall.

The 6.7-acre property at 1527 Easton Road is owned by Michael and Sarah Chaffier of Hellertown. Two large single-family homes exist on the property, which straddles the Hellertown-Lower Saucon Township border. 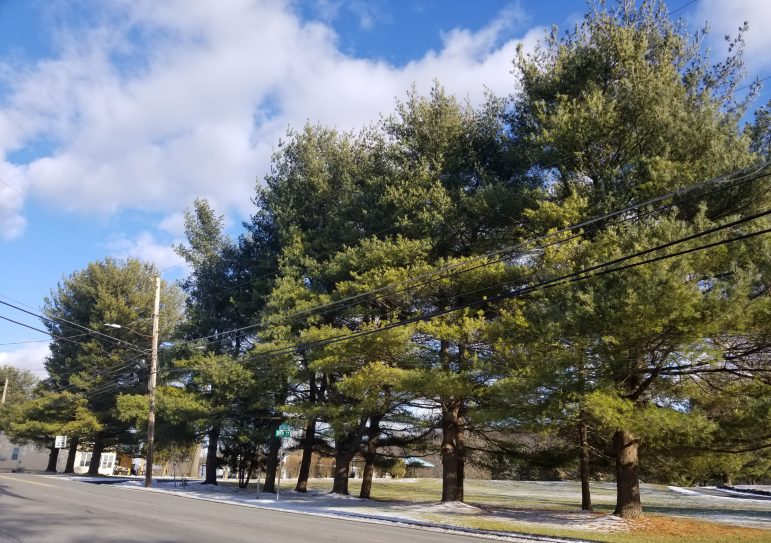 A row of large pine trees delineates the roadside edge of 1527 Easton Road near High Street in Hellertown borough. A group of neighbors are challenging a nearly-year old court ruling which changed the borough portion of property’s zoning from R-1 to R-2. Under the R-2 zoning, higher density housing could potentially be built. (FILE PHOTO)

The Chaffiers’ effort to rezone their property dates back to November 2019, when the request came before the Hellertown Planning Commission, whose members voted 4-3 to recommend against it. Around the same time, the Lehigh Valley Planning Commission voted in support of the proposed rezoning.

According to the minutes of the November 2019 borough planning commission meeting, member Joseph Pampanin “pointed out that a majority of the property is surrounded by single family homes and not multi-family homes.”

The Chaffiers took their request for the property to be rezoned before Hellertown Borough Council in January 2020, this time with increased vocal opposition from neighbors, some of whom expressed their belief that the property should remain in the R-1 zoning district.

Single-family detached dwellings are the only housing type permitted by right in the R-1 zoning district.

The group of neighbors living on and near Morning Star Road told council they feared changing the zoning status of the Chaffier property could lead to development which would negatively impact the character of their neighborhood as well as their quality of life.

“Any of these (housing types permitted in R-2) would certainly impact current character and look of the area, increase traffic and decrease home values,” Morning Star neighbor James O’Brien commented in a Facebook post from January 2020.

Members of borough council, however, voted 5-1 (with one abstention) in favor of the rezoning at their Jan. 21, 2020 meeting. The majority of council members cited both a potential increase in borough tax revenue if the Chaffier property is developed and their belief in the property owners’ right to rezone their land in making their decision.

The neighbors, however, were granted an unlikely victory less than a month later, when Hellertown Mayor David Heintzelman exercised a seldom-used mayoral power to veto the ordinance changing the property’s zoning status.

Heintzelman called the matter a “no-win” situation at the Feb. 3, 2020 borough council meeting at which he vetoed the ordinance.

“I am going to veto this decision under Borough Code because I am uncomfortable with how it is written,” Heintzelman said.

A subsequent effort to override Heintzelman’s veto via a supermajority vote failed when only four members of council voted in favor of the override.

The celebration by the Morning Star neighbors was short-lived.

The Chaffiers appealed the veto and the Northampton County Court of Common Pleas ruled in their favor in August 2020, with the result being that the rezoning by council was reinstated, according to Hellertown Zoning and Codes Enforcement Officer Kris Russo.

Russo said several Morning Star neighbors then retained an attorney to “appeal the ordinance’s substantive validity” in a hearing before Hellertown’s Zoning Hearing Board.

The majority of last month’s portion of the hearing consisted of testimony by Morning Star Road neighbors and their witnesses, whose testimony was in support of the appeal.

O’Brien once again testified that changing the zoning status of the Chaffier property may negatively impact character of the neighborhood in which he and his neighbors live.

“Right now the neighborhood is full of single-family homes,” O’Brien said. “There are no high-density townhomes or rowhomes there, so it would completely change the character and aesthetic of the neighborhood.”

Townhomes currently stand on the other side of Easton Road along Stonewood Lane, Greystone Place and Oakridge Lane. An updated Hellertown borough zoning map shows that 1527 Easton Road is now the only property east of Easton Road with an R-2 zoning status. 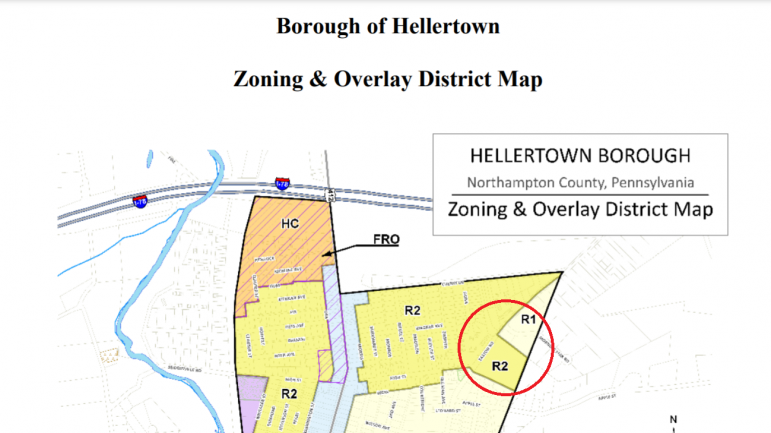 The most up-to-date Hellertown borough zoning map shows that the Chaffier property at 1527 Easton Road is currently the only land east of Easton Road with an R-2 zoning designation.

Andrea Goshen, another neighbor appealing the rezoning decision, said her family made a variety of improvements to their home at 1549 Easton Road with the understanding that higher-density development would not extend to their side of Easton Road.

“The purpose of doing the extensive renovations to our house was to upgrade our house to fit the community behind us on Morning Star, not to fit into a mobile home park, or apartment complexes or even townhouses,” Goshen said.

The neighbors also challenged an argument presented by a lawyer representing the Chaffiers, Joseph Fitzpatrick, who told borough council in January 2020 that the Chaffiers would have a hard time making reasonable use of their property under R-1 zoning.

Fitzpatrick, who referred to 1527 Easton Road as “the largest undeveloped parcel in the borough,” said it “is simply not large enough to put single family homes on it.”

Mark Bahnick, a civil engineer and an appellate witness at last month’s zoning board hearing, presented a sketch concept plan put together by his firm, Van Cleef Engineering Associates, which he testified evaluated potential development opportunities for the Chaffier property based on its original R-1 zoning designation in Hellertown borough.

Joseph D’Ambrosio, an appellate witness and licensed realtor, testified that he believed the lots proposed in Bahnick’s sketch plan would be marketable in the Lehigh Valley.

Following hours of appellate testimony, members of the zoning hearing board agreed to adjourn the meeting before testimony from Borough of Hellertown witnesses began.

The hearing resumes on Wednesday, June 16 at 6:30 p.m., according to a Facebook post from the Borough of Hellertown’s official page.

The public is invited to attend the meeting virtually via Zoom or in person.