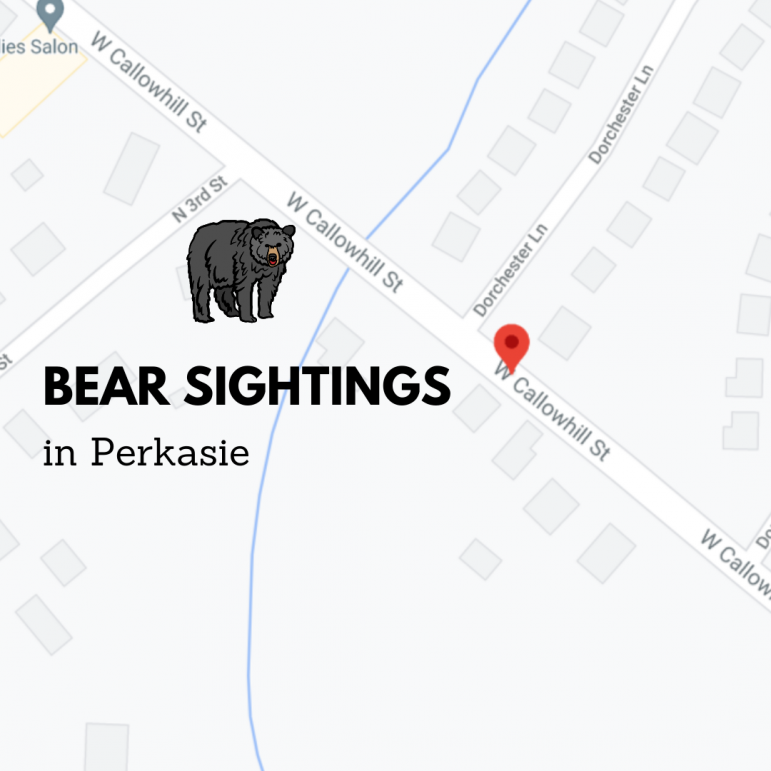 Perkasie Police issued an alert Tuesday night following bear sightings in the borough. Police said the last reported sighting was in the area of W. Callowhill Street near Third Street. A bear seen there was headed in the direction of the creek, they said. An updated alert was issued by the department Wednesday morning.

Editor’s Note (June 16, 1:30 pm): This story has been updated with additional information and a photo of a juvenile bear provided by the Perkasie Police Department.

The borough of Perkasie had surprise visitors of the bruin variety Tuesday evening.

Police issued a statement via their Crimewatch website that a series of black bear sightings which began at 8:20 p.m. had concerned residents.

Authorities said the first reported sighting was for two bears in the area of Ridge Road.

“Subsequent sightings only observed one bear and moved through the borough, with the last sighting crossing Callowhill Street near Third Street in the direction of the creek,” the statement said.

Police added that officers continued to check the area in which the last reported sighting occurred until after darkness fell.

The Pennsylvania Game Commission was notified of the sightings, police stated. 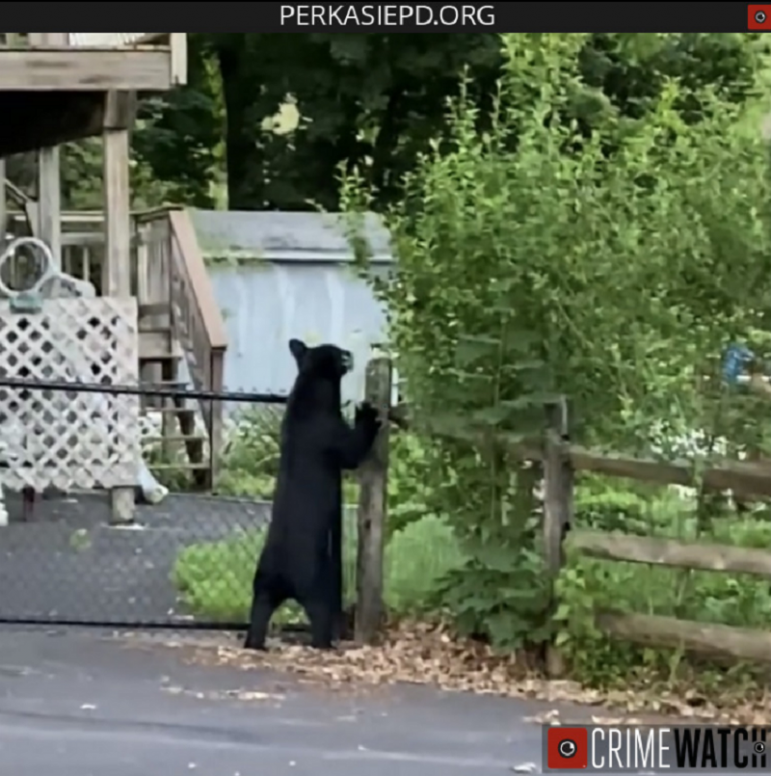 Perkaise Police shared this photo of a bear spotted in the borough Wednesday. They also said in an update that a small bear was struck by a motorist on Ridge Road near the Branch Valley Fish & Game Club early Wednesday morning. The Pennsylvania Game Commission has responded to investigate the sightings.

On Wednesday morning, police issued a second Crimewatch update about the bear sightings in which they said a small bear was struck by a car on Ridge Road near the Branch Valley Fish & Game Club (Hiline Drive). Officers responded to the accident involving the bruin, which police said was reported during the early morning hours.

“There was evidence that the bear may have been injured,” police said, adding that the Pennsylvania Game Commission was notified and responded to investigate the sighting.

“The Pennsylvania Game Commission reports that this is normal behavior for young bears during this time of the year,” police said. “If you observe a bear, please do not approach the bear, attempt to feed the bear or harass the bear.”

Police encouraged residents to familiarize themselves with bear safety tips by visiting the Game Commission’s website, which features a page titled “Living with Pennsylvania Black Bears.”

The page lists the following recommendations for Pennsylvanias who encounter black bears:

What To Do If You Meet A Bear

Bear attacks are extremely rare, especially considering how often people encounter them. In most cases, a bear will detect you first and leave the area long before you’ll ever see it. However, if you do meet a bear before it’s had time to leave, here are some suggestions. Every bear encounter is different.

Alert the bear — If you see a bear, make some noise to alert the bear of your presence, giving it ample time and space to turn and leave. Avoid being caught up in the excitement of seeing a bear and inadvertently letting the bear get too close before surprising it.

Get back — If you have a close encounter, back away slowly while facing the bear so you always know where the bear is and how its reacting. Wild bears rarely attack people. Slowly backing away diffuses the situation and gives the bear room to flee.

Stay calm — encountering a bear can be startling, but try to remain calm. While moving away, avoid sudden movements and talk to help the bear keep track of your retreat. Don’t turn and run or attempt to climb a tree. Running may prompt the bear to give chase, and climbing a tree could be interpreted as a threat to any cubs that are present since cubs often climb trees when startled. Move toward your camper, house or vehicle if nearby.

Pay attention — Bears will use all of their senses to figure out what you are. If they recognize you as a person, some may stand upright or move closer in their efforts to detect odors in the air currents. Don’t consider this a sign of aggression. Once a bear identifies you it will usually leave. If it begins to slowly approach you, face the bear, wave your arms wildly and shout while continuing to back away. The idea is to intimidate the bear into retreating. Swing a stick, your backpack or whatever is handy if the bear gets close. If suddenly surprised, some bears may feel threatened and give warning signs that they are uncomfortable. They may clack their jaws together or sway their head; those are signs for you to leave. Some bears have been known to charge to within a few feet when threatened. If this occurs, wave your arms wildly and shout at the bear.

Fight back — Black bear attacks are extremely rare. If a black bear attacks, fight back. Bears have been driven away when people have fought back with rocks, sticks, binoculars and even their bare hands.

The Pennsylvania Game Commission is responsible for managing, conserving and protecting all wildlife, and is committed to doing everything possible to keep bear conflicts to a minimum. Regulating harvest to stabilize or reduce bear numbers in problem areas and prohibiting the feeding of bears are measures taken to help alleviate conflicts with bears. If you are having a problem with a bear and have no success using these suggestions, or have been threatened by a bear, please contact the appropriate Game Commission region office.