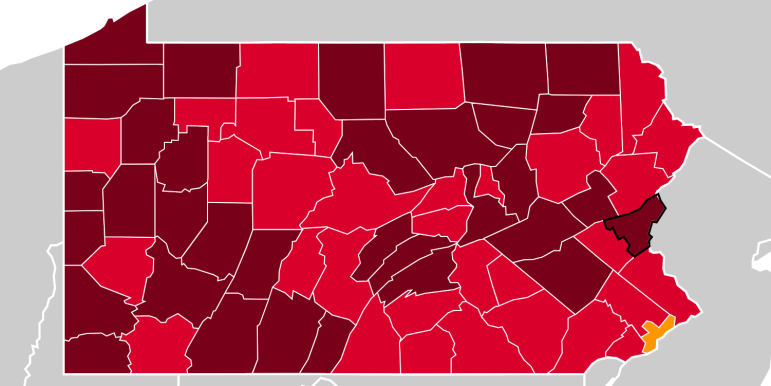 Northampton County, which is highlighted in black on the above map, is reporting its highest daily average of new cases in nearly a year. Additionally, the county’s positive test rate is the highest recorded since May 2020. (Credit: COVID Act Now)

As the coronavirus pandemic nears the start of its third year, many Americans are weary of following the guidelines public health officials continue to recommend in the fight against the disease, including wearing face masks and receiving the COVID-19 vaccine.

Behavior related to “COVID fatigue” and colder weather–which aids transmission by increasing the number of people confined indoors, where the disease is more easily spread–are likely driving up new case numbers in Northampton County and elsewhere to levels not seen in nearly a year.

For each of the past four days (Dec. 2-5), the number of new COVID cases reported by Northampton County officials has surpassed 300, and the rolling seven-day average stands at 241 cases per day. The last time that number was so high was in early January of this year, near the peak of the pandemic’s second–and so far, worst–wave.

The average number of new cases being reported in Northampton County is so high once again that the county’s risk level was upgraded from “Very High” to “Severe” Monday by the website CovidActNow.org. The change in the county’s risk status occurred because of the surge in new cases, which are averaging more than 75 per 100,000 residents per day for the first time since Jan. 14, 2021. This also puts the county under the site’s “Extreme” COVID classification. As of Monday, Northampton Co. was averaging 241 new confirmed cases per day or 78.8 for every 100,000 residents, based on the county’s population of approximately 310,000 people. Despite that statistic, there are 25 other counties in Pennsylvania which currently have a higher number of daily new cases per 100,000 residents, including both Schuylkill (96.8) and Carbon (87.3), just to the north and west.

Another concerning statistic in Northampton County is its positive test rate, which is currently at 17 percent. The county hasn’t had a higher positive test rate since May 2020, during the pandemic’s first wave, when testing was considerably more difficult to obtain.

This “relatively high percentage” of positive COVID tests is an indication that “testing in Northampton County…is limited and that most cases may go undetected,” per the site.

The infection rate in Northampton County is currently 1.23, which means that on average each person with COVID-19 is infecting 1.23 other people. That’s the highest the infection rate in the county has been since August, according to statistics on the disease.

Covid Act Now also reported that as of Monday, 95 percent of the 63 ICU beds in the county’s hospitals were filled, with 12 of them occupied by COVID patients.

The county’s vaccination rates–like those in many parts of the country–have plateaued since the summer, although many children in the 5 to 11 age category are currently being vaccinated against COVID.

Pennsylvania has one of the highest COVID vaccination rates in the country, ranking ninth out of the 50 states and one spot higher than New Jersey on the list of most-vaccinated states.

With a population of roughly 370,000 people, Lehigh County is also reporting a spike in its daily caseloads, with nearly 400 new cases reported on Saturday. Its rolling seven-day average of 253 new cases a day is also the highest that average has been since January.