Poor Mouth performs old-time bluegrass music on the front porch of Bergy's at Wassergass and Lower Saucon roads Saturdays from 10 a.m. to 12 p.m. 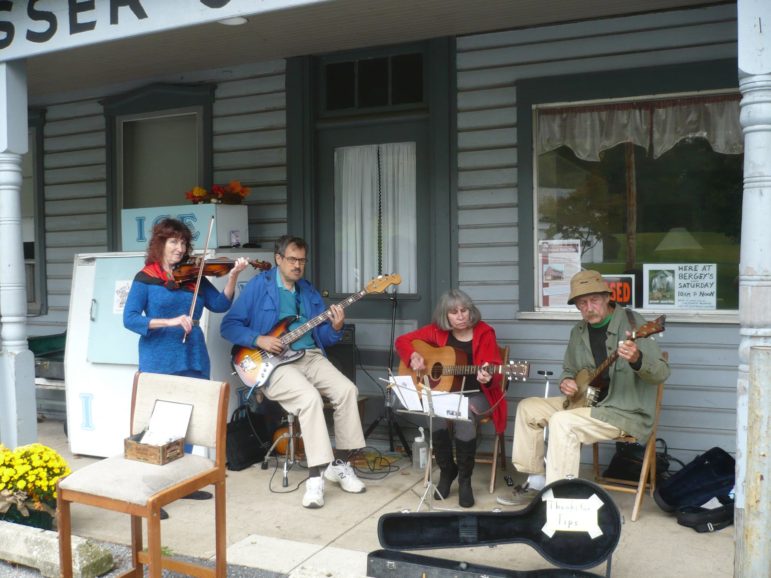 A curious thing has been taking place in the heart of “downtown Wassergass” recently.

On Saturday mornings, passers-by have noticed a group of musicians playing “old time mountain music” on the front porch of Bergy’s Mall–the late 19th century general store that was the heart of the eastern Lower Saucon Township village until it closed a year ago.

The revival of sorts is thanks to the group Poor Mouth, which has played on the porch, on and off, for several years.

Recently the porch performances have become a regular gig, with Poor Mouth playing for anyone who stops to listen from 10 a.m. to noon on Saturdays. Visitors are invited to set up lawn chairs and there is also a pot luck meal served inside the former general store some Saturdays.

Fiddler and Poor Mouth member Arlene Schar explained that the two other members of the group, Connie (lead vocals/guitar) and Dick Mann (banjo) “have been performing as Poor Mouth for years, playing old time mountain music with a revolving cast of sidemen.”

“I’ve been their fiddler for the past five years, and my guy Dave (Leffler) has been their bassist since moving to town last year,” she said. “We all miss Bergy’s, and this past August while practicing tunes we came up with the brilliant idea: Why not play in front of Bergy’s on Saturday mornings?!”

Schar said property owner Bill “Bergy” Bergstresser “was all for it” as “he’s missed the company of the store patrons.”

“Through Facebook, word of mouth, passers-by and the sign in the window, folks are stopping by to listen, chat and eat food,” she explained. “We set up a modest buffet (last week was brownies and cookies) and folks are encouraged to bring food and beverages to share. We are hoping the ‘pot luck’ will turn into a real feast! Bergy has opened the store so we can set the food inside on the counter, and once the weather gets cold we’ll be playing inside. It has become a friendly, neighborly scene and for two hours a week recreates the ambiance the general store has been known for over 100 years.”

Bergy’s Mall is located at 3640 Lower Saucon Road, at the intersection of Wassergass and Lower Saucon roads several miles east of Hellertown.

Below are two videos of the group performing, including one from 2011, before Leffler became part of it.