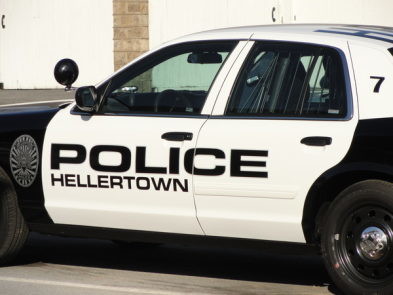 A man is facing a long list of charges after borough police say he resisted arrest following an alleged domestic assault in the 1100 block of Furnace Street Sunday morning and later broke free from officers near the Hellertown Police Department in the 600 block of Main Street, briefly escaping into traffic, where he was struck by a passing vehicle.

“At that time (Vazquez) resisted arrest and was eventually taken into custody,” police said.

“He was transported by EMS to St. Luke’s Hospital for a non-use-of-force-related health issue” and was later released from the hospital and transported back to the Hellertown Police Department at 685 Main St., Hellertown, for processing, the news release states.

After charges were completed, Vazquez was being escorted to a patrol vehicle to be taken to Northampton County Prison in Easton when “he managed to pull away from the escorting officer in an effort to escape,” police said. “While running, he ran into Main Street and was struck by a vehicle,” they said, adding that he “sustained minor injuries” as a result of the accident.

“While being taken back into custody, (Vazquez) bit an officer causing minor injuries to the officer,” according to the news release.

As a result of the injuries he received in the car accident, Vazquez was taken back to the hospital where police say he was “properly identified” and it was discovered that there were two active warrants for his arrest.

He was later released from the hospital a second time, after being cleared for incarceration, and taken to Northampton County Prison where he was committed on the active warrants.

As a result of the alleged incidents in Hellertown Sunday, per police Vazquez is being charged with:

A check of online court records as of 9 a.m. Monday morning indicated Vazquez has not yet been arraigned on the above charges, however police said he will be arraigned by a magistrate who “will set bail accordingly.”