The 2018 Saucon Valley Spirit Parade will soon be marching down Main Street in Hellertown. If you’re planning to go, you can expect to see dozens of floats, bands, organizations, businesses, fire and police departments and local dignitaries.

Parade chairman and Hellertown mayor David Heintzelman Thursday shared the list of parade participants as well as their division assignments with Saucon Source, so you can refer to it as you are watching, either in person, on TV or on Facebook live.

All of the division assignments have been mailed to participants, he said.

Each organization leader must bring their card to the registration area at the Saucon Valley School District campus staging area in order to be escorted to their correct position in the lineup, which is from noon to 1:30 p.m. Failure to register will disqualify participants from monetary prize eligibility.

Heintzelman asked for the public’s patience in dealing with the detours that will be set up around the parade route Sunday afternoon and mindful or their surroundings, for safety’s sake.

“Let us all be patient and enjoy a safe parade,” he said.

The parade begins at 2 p.m. Sunday, Oct. 21. It will be held rain or shine. Click here for more information about the parade. 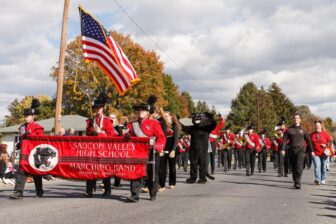 Griffin Kerr as “Jack in the Beanstalk”

Queen Weenie and Her Weinerettes float

Two of a Kind