Fountain Hill residents packed the Laros auditorium in the Doctors Pavilion at St. Luke’s Hospital-Bethlehem Tuesday night for a meeting about the future of the community’s police force, which borough council has said could mean supplementing borough police coverage with state police patrols. That proposal is in reponse to a budget deficit the tiny borough is facing.

A special Fountain Hill Borough Council meeting held Tuesday to discuss various options for providing police coverage to the cash-strapped borough drew a large crowd and the accusation by the head of the borough’s police officer association that at least some council members are “anti-police.”

Ofc. Steven Fritzinger, representing the Fountain Hill Police Officer Association, was invited to address the audience by Chief Ed Bachert after an attendee said he wanted to hear directly from borough police officers.

At issue is a proposal under consideration by borough council to replace borough police coverage with state police patrols during the overnight hours, which council president Leo Atkinson said is when the volume of calls received by police is at its lowest.

The proposal could potentially save the borough hundreds of thousands of dollars, Atkinson said, in part because it would reduce the amount of overtime worked by borough officers, who collectively earned more than $142,000 in 2018. 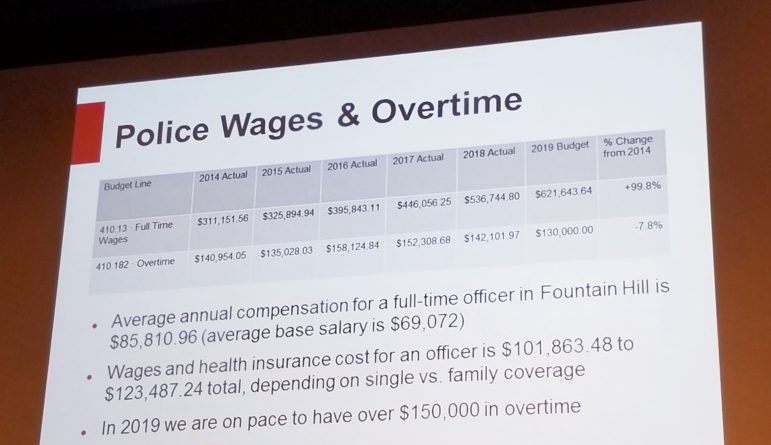 This chart which was displayed on an overhead projector at the meeting lists the full-time wages and overtime earned by Fountain Hill police officers from 2014 to 2018, as well as projections for 2019. The department currently has eight full-time officers.

Utilizing state police during the midnight to 8 a.m. shift would also mean that the Fountain Hill Police Department would not have to fill a currently-vacant full-time officer position, attendees were told.

Some members of the audience, however, along with Fritzinger, appeared highly skeptical of the budgetary facts being presented.

“We…have a little different opinion than what council is presenting,” he said of the officers association. “A lot of times taxpayers demonize us for spending too much of their money. … It comes down to priorities.”

Fritzinger said comments made by residents at the meeting–such as one by a woman who said that as a parent of an autistic child she feels safer with round-the-clock borough policing–confirmed for him that their “priority is having good coverage for the borough.”

He contrasted that sentiment with what he called “mismanagement of borough funds and anti-police sentiment” by borough council members, who he did not identify. 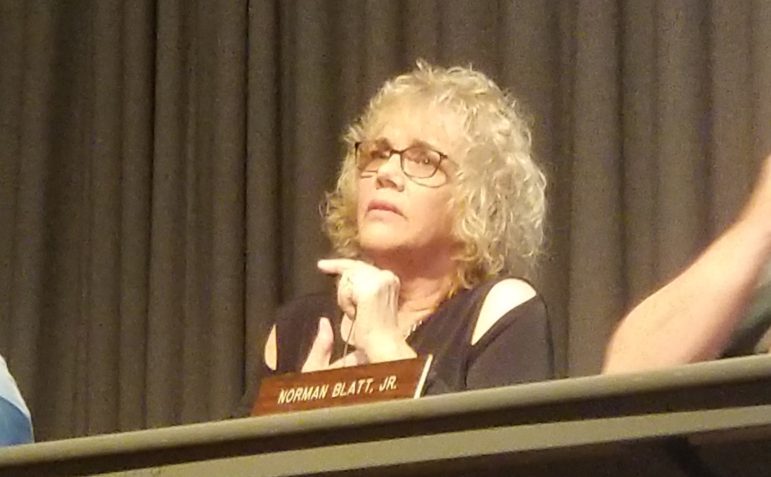 “When Ofc. Fritzinger said there were some anti-police feelings on this council, it broke my heart,” she said.

“We all want the best for all of you, because we are you,” Jordan said. “I believe we have been misrepresented and made the villain over the last four to five weeks.”

Jordan said she and the other six council members would never vote for something that would put residents in danger.

During a presentation by state police Lt. Dennis Long about how patrols by troopers would work, Mayor Carolee Gifford asked pointed questions as part of an effort to compare the possible state police coverage with the borough police’s coverage.

The Pennsylvania State Police at Bethlehem, whose barracks are located on Airport Road in the city, would be responsible for patroling the borough.

Long responded that the state police has a vice squad to whom tips would be referred by officers who observe any possibly drug-related activity.

Gifford also asked about whether troopers would monitor the homes of residents who are away for an extended period of time, which he said they will do if given prior notification.

When Gifford tried to question Bachert about “recent drug busts” she said borough police have made, Atkinson cut her off, which was what audience members also attempted to do as she further prodded Long by asking, “What about a landlord-tenant dispute?”

“How many landlord-tenant disputes do we have after midnight?” quipped one man. 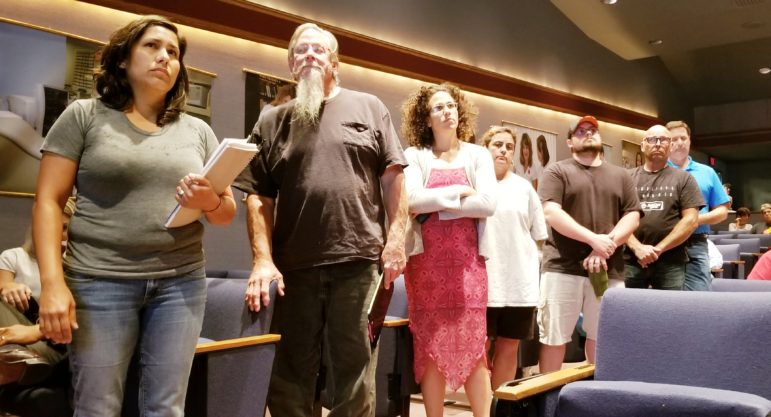 Residents with a question or concern stand in a line at the meeting. At least two dozen residents addressed borough council over about two hours.

Another outburst occurred when a woman who said she lives on Tombler Street denounced the money in the borough budget that is used to fund the Fountain Hill swimming pool and the borough’s participation in the Bethlehem Area Public Library.

“If the people of Fountain Hill want to belong to the Bethlehem library, (those people) should pay!” she shouted, drawing a loud boo.

“I think we really should be reducing that (amount),” he said.

He defended the $90,000 the borough contributes annually to be a part of the BAPL system, however, which the Tombler Street resident said should instead be spent on a police officer’s salary.

Gifford also defended the library, and said to debate that expenditure “is kind of a moot point” since residents voted in a referendum to be a part of the Bethlehem library system.

Also drawn into the discussion was St. Luke’s University Health Network, which was both defended and criticized.

The hospital owns nearly 50 percent of the land in the borough, but as a nonprofit institution does not pay property taxes on the majority of its holdings.

A hospital fact sheet distributed at the meeting said SLUHN voluntarily pays approximately $56,000 in annual property taxes on 14 borough properties it owns, and that more than $148,000 in earned income tax collected from its employees by the borough accounted for “nearly 25 percent of the Earned Income Tax received by Fountain Hill in 2018.”

“Over the past 13 years, St. Luke’s University Hospital has donated over $1.25 million to the Borough,” it said.

According to the fact sheet, the hospital “accounts for only 6.9 percent of Fountain Hill Police Department’s total call volume.”

Bachert, however, said of St. Luke’s: “They are our largest consumer of police services.” He added that officers responded to 550 calls to the hospital in 2018, which is said would be the equivalent in manpower hours of one officer working full-time for about 40 weeks. 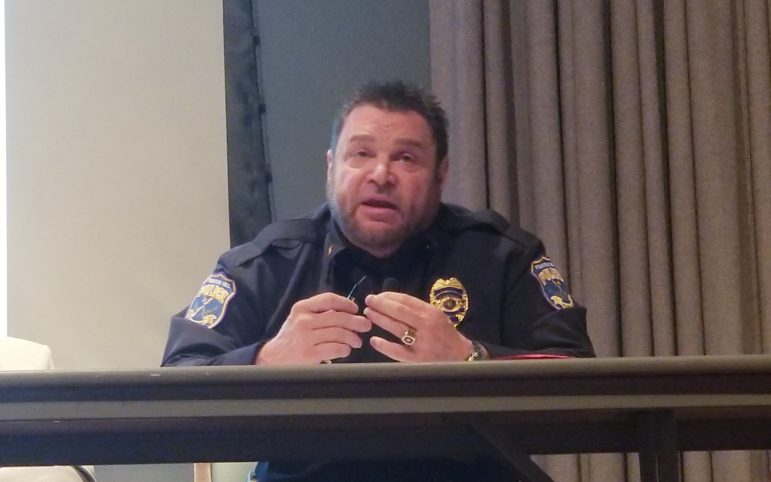 Fountain Hill Police Chief Ed Bachert speaks at the meeting. Bachert noted that the department recently began publishing records of arrests on the Fountain Hill Police Officers Association’s Facebook page. He admitted that “we should have been doing that all along, and that’s our mistake.”

Norway Place resident Cathy Anthony referred to the hospital as “the gorilla in the room” and asked whether the borough should “ask them for help.”

Atkinson said he has been and remains in discussion with hospital officials about ways St. Luke’s could potentially lessen the financial burden being placed on the residents of what is essentially a bedroom community, and he called the talks positive.

An effort was made to draw a comparison with Bath borough, which has been covered by state police since it withdrew from the Colonial Regional Police Department several years ago, with Atkinson calling PSP response time there “very good” in the case of emergencies.

That comparison drew criticism fom borough business owner Martin Reinsmith, however, due to what he said are noteworthy differences in both demographics and geography.

Elaine Wyborksi of Moravia Street said she formerly resided in the borough of Topton, which replaced local coverage with state police coverage, and that after the changeover the response time increased to 20 minutes.

In an effort to get concrete numbers that could possibly shed light on how much violent crime is taking place during the hours state police could be patrolling Fountain Hill, Dodson Street resident Amy Zanelli said she wanted to know the number of domestic violence calls borough police respond to between midnight and 8 a.m., as well as the number of domestic violence calls during those hours state police have responded to in small boroughs they patrol in the area.

Atkinson asked Bachert to provide that information, which may be discussed at the next Fountain Hill borough council meeting.

By law the borough must adopt a 2020 budget that will address police funding by the end of the year, but Atkinson stressed that council is “still early in our budgeting process.”

Perhaps the one thing everyone at the meeting agreed about was that the high level of participation by residents in the policing discussion was both remarkable and admirable.

“Come to those meetings,” resident Patrick Figueroa exhorted his neighbors.

“I’m glad to see this turnout is as big as it is,” added council member and former mayor Fran Ferencin.

Editor’s Note: A redacted quote about St. Luke’s Hospital in this story was erroneously attributed to Martin Reinsmith. No such statement was made by him and we apologize for any confusion the error may have caused. 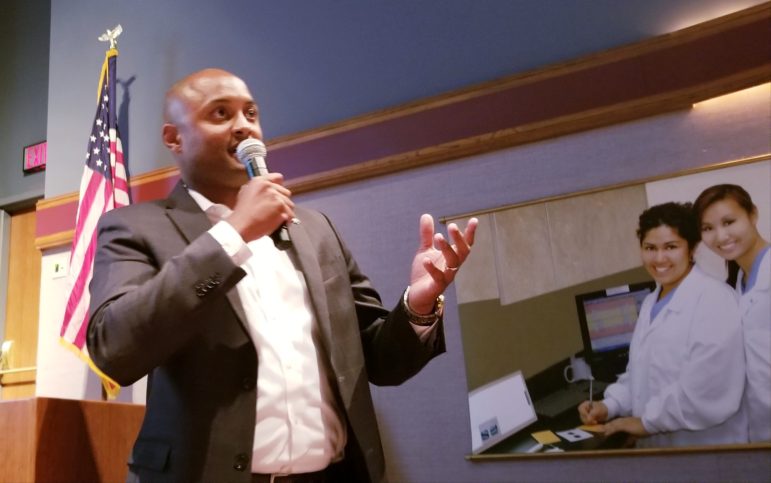 Fountain Hill resident Patrick Figueroa speaks at the meeting. He said he and his wife have lived in the borough for five years, and expressed concern about the future of his community. “We might go bankrupt, and if that happens the state’s just going to come in clean house,” Figueroa said before urging other residents to take a more active role in a discussion that will likely shape the future of Fountain Hill.