HARRISBURG — Pennsylvania Democrats are in striking distance of taking control of the state House, strategists in both parties say, as President Donald Trump’s unpopularity in the suburbs threatens down-ballot Republicans, and Democrats pummel GOP incumbents on the airwaves.

Democratic candidates and outside groups are outspending Republicans by a margin of more than three to one across the most competitive battleground districts, according to data from the ad-tracking firm Advertising Analytics. Democrats need a net gain of nine seats to win a majority.

Republicans have a tighter grip on control of the state Senate, though Democrats are also spending heavily in their bid to flip the four seats necessary for an effective majority.

A takeover of either chamber would boost Gov. Tom Wolf’s agenda during his final two years in office on issues like infrastructure spending, the minimum wage and protections for the LGBTQ community. That would be a stark contrast from the first six years of his tenure, when the legislature often brawled with Wolf, a Democrat, on taxes and spending. During Wolf’s early years in office, the state went months without passing a budget. More recently, the governor and GOP majority have clashed over the state’s response to the coronavirus pandemic.

But the stakes are even higher this year, since the next General Assembly will draw new congressional district boundaries that will shape Pennsylvania politics for years to come.

The nonpartisan Cook Political Report last week switched its rating for control of the 203-member state House from Lean Republican to Toss Up. Cook kept the 50-member Senate at Lean Republican.

“This is what happens when you put so many seats in play and you’ve got candidates working incredibly hard who really fit their districts well,” she said.

In 2018, Democrats flipped five Senate seats and added a net of 11 House seats, as the two candidates at the top of the ticket–Wolf and Democratic U.S. Sen. Bob Casey–won re-election by double-digit margins.

Democrats are trying to build on those victories, but a takeover is by no means a slam dunk. The GOP could well offset losses in the suburbs with its own gains in the northeastern and southwestern parts of the state. That’s where Democrats are hanging onto seats in white, working-class areas that went big for Trump in 2016 and are increasingly trending Republican.

Democrats are also defending seats in more than a dozen districts Trump carried in 2016 and will need to win more Trump districts to take the majority.

“To pull this off the Dems would have to run near-perfect campaigns in every corner of Pennsylvania,” said Tommy McDonald, a Philadelphia-based Democratic media consultant who works on legislative races.

» YOUR VOTING QUESTIONS, ANSWERED: Join Spotlight PA at 10 a.m. Monday, Nov. 2 to get all of your questions answered about the week of the election, what to expect, what to watch and more. Register for free now!

For every district where Trump is seen as hurting the Republican candidate, “he’s helping two candidates out west,” said state Rep. Greg Rothman (R., Cumberland). Rothman noted that, because of the party’s 2018 losses, it now has fewer seats to defend in the Philadelphia suburbs, and that the GOP started knocking on doors and canvassing earlier than Democrats. (Democrats say they were taking coronavirus precautions.)

“When you have as much money as Democrats have, you can spend it wherever you want to spend it,” said Rothman, chairman of the GOP’s House campaign arm. “That doesn’t necessarily mean it’s being spent wisely.”

But among the House districts considered most competitive, the GOP is mostly on the defensive and Democrats’ big cash advantage has helped expand their options for a path to the majority.

There are 20 House districts where campaigns and outside interest groups have spent at least $100,000 on television ads since Sept. 1, according to Advertising Analytics. In those districts, Democratic groups spent almost $5.9 million on the airwaves between Sept. 1 and last week, compared to $1.8 million by GOP groups.

And progressive groups have been organizing since Trump’s election, with many of them focusing on local and state races.

The GOP took over the Senate in the mid-1990s and won control of the state House in 2010. During Barack Obama’s presidency, Republicans built huge majorities in both chambers, as Democrats fell out of power in statehouses across the country. Now Democrats hope Trump can fuel their comeback, in Pennsylvania and elsewhere.

Some Republicans say they like the party’s odds to keep the majority but acknowledge they’re facing headwinds.

“There are two potential theories here,” said Christopher Nicholas, a veteran Pennsylvania GOP strategist. “One is, if you’re a House Republican in the suburbs…and you survived the 2018 onslaught, it’s hard to imagine 2020 being worse. The other part of that is: ’18 was part of the continuum and the pendulum is still swinging in 2020. So, yes, it could get a little bit worse.”

“That’s what the epic collapse of the GOP in the suburbs, especially with women, is driving,” Nicholas added. 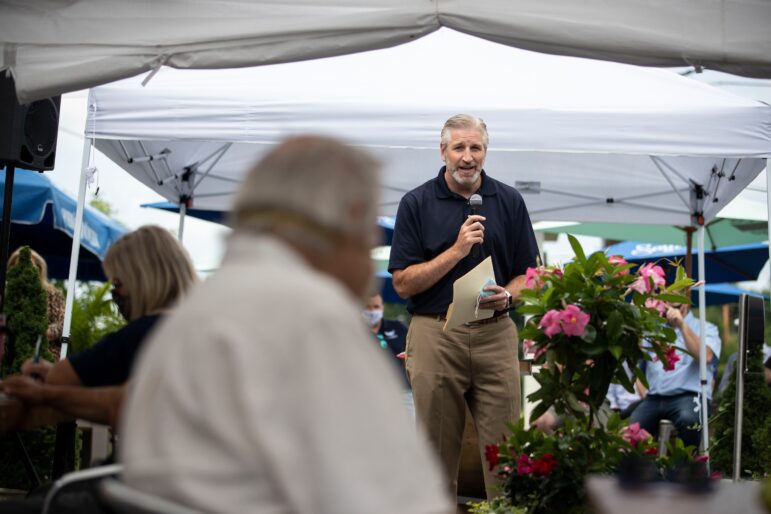 In Montgomery County, Republican Rep. Todd Stephens’ campaign is highlighting his support from the state’s largest teachers union and featuring testimonials from self-described Democrats saying they’re voting for him.

In the Philadelphia suburbs, Democrats are hoping to flip the last GOP-held seats that Hillary Clinton carried in 2016. In the Montgomery County-based 151st House District, Republican Rep. Todd Stephens’ campaign is highlighting his support from the state’s largest teachers union and featuring testimonials from self-described Democrats saying they’re voting for him.

Pennsylvania Fund for Change, an independent political committee supporting Democratic candidate Jonathan Kassa, has already spent more than $550,000 on cable TV ads in the race, according to Advertising Analytics. The committee has reserved another $108,000 in airtime through Election Day.

The Stephens and Kassa campaigns have spent a combined $208,000 on TV. 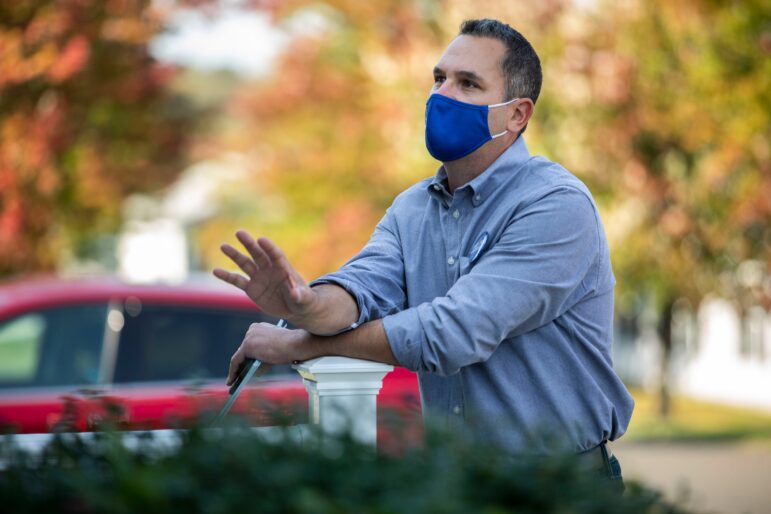 Jonathan Kassa, the Democratic nominee for a state House seat in Montgomery County, talks to a voter in North Wales on Oct. 7. The seat held by incumbent Republican Rep. Todd Stephens is one Democrats hope will help them flip control of the chamber.

Pennsylvania Fund for Change had raised $5.6 million as of Oct. 19 and has already spent the bulk of that money, campaign finance records show. It received more than $3 million in contributions from PA Alliance Action, a nonprofit group that is registered with the IRS as a “social welfare” organization and isn’t required to disclose its donors. Other big donors to Fund for Change include trial lawyers and labor unions like the American Federation of State, County and Municipal Employees, which gave $525,000.

In Delaware County, the once formidable GOP machine could find itself with zero representation in Harrisburg.

Democrats are also hoping to flip seats in suburban districts Trump carried four years ago but where voter registration trends and more recent election results point to potential inroads. The party is spending heavily in such districts in Bucks County, the Lehigh Valley and the suburbs of Pittsburgh and Harrisburg.

In the 105th District, less than 10 miles from the state Capitol, Republican Rep. Andrew Lewis won the seat two years ago by just 512 votes. Lewis, an Iraq War veteran, now faces a challenge from Brittney Rodas, a former policy analyst for the House Democratic Caucus.

“We feel good about it. It’s going to be close,” Rodas said. “We’re never going to run away with it.”

Rodas has criticized Lewis for how he and the rest of the Republican caucus responded to the coronavirus pandemic. Soon after Wolf shut down tens of thousands of businesses this spring in an attempt to slow the spread of the coronavirus, House Republicans pushed back with bills to limit the governor’s powers. Lewis even encouraged Dauphin County commissioners to defy the closure orders.

Then, in May, Lewis tested positive for the coronavirus. He said he followed all protocols and self-isolated. But he didn’t publicly announce he tested positive until a week after his diagnosis. Several Democratic lawmakers said that put them and their family members at risk, and the conflict drew national attention.

Rodas called the secrecy “reckless,” “dangerous” and “selfish.” Lewis said the criticism related to his diagnosis brought “mudslinging to a whole new level.”

Even as Democrats try to pick up a few seats in upscale districts outside Pittsburgh, Republicans are hoping to oust House Democratic Minority Leader Frank Dermody, who represents a working-class area in parts of Allegheny and Westmoreland counties that Trump carried by a few points.

And the GOP is targeting Democrats in a few districts Trump won by more than 30 percentage points, like in the Cambria County-based 72nd District. A Facebook ad paid for by Republican challenger Howard Terndrup frames the race like this: “Take back control from Gov. Wolf. Vote Howard Terndrup. A Pro-Trump conservative for us.”

But Democratic Rep. Frank Burns is touting his own conservative credentials: endorsements from groups like the National Rifle Association and his votes to override Wolf’s coronavirus business restrictions.

100 PERCENT ESSENTIAL: Spotlight PA relies on funding from foundations and readers like you who are committed to accountability journalism that gets results. If you value this reporting, please consider making a gift today at spotlightpa.org/donate.