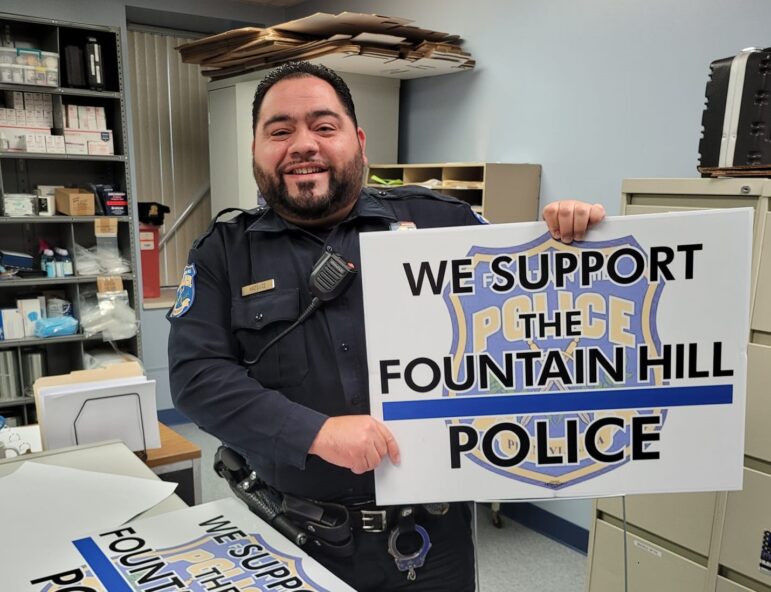 The Fountain Hill Police Department is selling police support yard signs for $10. The sale is a fundraiser for the local dog rescue organization Paws 2 Freedom.

Residents of Fountain Hill who wish to support their local police can do so while helping the department raise money for Paws 2 Freedom.

The Fountain Hill Police Department is selling $10 yard signs, which show support for the officers who serve the community. Residents of the borough gave the department the idea to begin selling signs this year.

“We had a lot of requests from many members of our community asking us to sell signs,” said officer Rick Krasley, who serves as an investigator for the department as well as vice president of the police officer association. “We figured this would be a good idea to sell some signs and do a little bit of fundraising to help raise money for Paws 2 Freedom.”

“They help us safely place dogs found in Fountain Hill,” said Krasley. “The goal is to help place animals with a nice, loving family.”

The sale is the first time the two organizations have teamed up for a fundraiser.

The signs can be purchased at the police department on Mondays from 8 a.m. to 4 p.m. Those interested in purchasing a sign may also message the Fountain Hill Police Officer Association page on Facebook.

The signs have been a success so far, as the department ran out of its first batch at the end of October. A new batch arrived earlier this month, and the department continues to enjoy the outpouring of community support with each sign sold.

“We would like to thank our beloved community for all the love and support you have shown us,” the department said. “A big thanks to everyone who has helped us raise money for Paws 2 Freedom.”

The Fountain Hill Police Department is not the first local department to sell yard signs in support of officers. Signs supporting police have been a common sight next to campaign signs this fall, following a polarizing summer in which the actions of police departments across the nation came under scrutiny.