Well, we made it. As I write this, Thanksgiving leftovers are depleted, the tree is up and decorated, and the holiday season has officially arrived. One thing we can always count on this time of year is that the festivity dial gets cranked up over the next few weeks as we celebrate with friends and family, and for a high percentage of people in the U.S. that festivity will involve drinking.

With that, I thought it would be timely to talk a bit about drinking. BAR40 has always had a ’52-week Sober Challenge’ aspect to it so the topic is familiar territory, but the increased interest shown by people in taking a break from the overindulgences in booze the past eight months have brought is a sign of the times we live in…and related Covid-drinking fatigue. I realize of course that not everyone drinks, but even if this topic isn’t directly applicable to you, perhaps it’s a subject you will find useful as it relates to someone in your life. 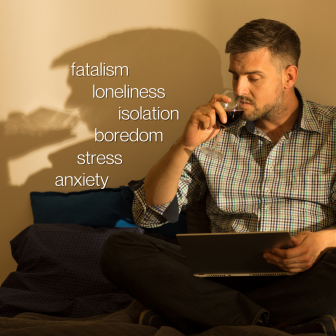 If you have found that you or someone you love has been drinking more heavily during the COVID-19 pandemic, you have plenty of company. The isolation required to help combat the disease’s spread has increased rates of alcoholism and other substance abuse disorders in the U.S. and around the globe.

Covid-19 has been life-changing for all of us in every way imaginable (and some unimaginable), and one of the unfortunate trends that have developed has been the significant uptick in alcohol consumption. For some people, that means the drinking habit they had going into Covid has swelled into a full-grown problem now that they don’t have the guard rails and structure that their normal 8-5 office routine provided. For other people, it may mean that their once a month glass of wine at dinner has turned into Zoom happy hours three times a week and they’ve found that when the Zoom call is over at 6 p.m. they tend to keep drinking the rest of the night. For others, the change in schedule and not going into their office has meant that instead of having their first drink of the day at 6 p.m. it has crept up into the afternoon, and now eight months into this new world order their drinking is tracking toward the “it’s noon somewhere” philosophy. Alcohol is an addictive substance, and like any other addictive substance the more we do it, the more we tend to overdo it.

In a lot of ways, this year has proved to be the perfect cocktail recipe (as it were) for a drinking problem to develop. Ingredient #1 is social isolation, stress, anxiety, depression and other mental ailments that have been worsened by the 24/7 onslaught of Covid news and worry. Ingredient #2 is a general normalizing of excess drinking and afternoon “Quarantini” parties rationalized with the reasoning that, “Hey, it’s the end of the world…bottoms up!” Finally, add in the fact that many people are now working from home and are operating in an environment without direct interaction with co-workers and managers, and have newfound freedom to drink freely without any concerns of ‘getting caught.’ “Can’t smell the booze on Zoom, right!?” (That is a direct quote I’ve heard on more than one call.)

If you find yourself somewhere along the concern spectrum regarding your drinking, then this is the perfect time of year to pause for some honest introspection and corrective action if needed. If you do decide that you want to cut back, take a break or stop drinking altogether and need some help sticking to your guns, then looking at the concept of cravings is an ideal place to start. Oftentimes shining a light on the process of what’s happening in our brain, both consciously and subconsciously, can be a huge help in better understanding our triggers and habits in dealing with the situation.

William Porter, author of Alcohol Explained is a subject matter expert who has expertise in helping people stop drinking by eliminating their desire to drink.

For the sake of keeping this brief, I’ll summarize with his concept of the 4-stage life cycle of cravings and how they factor in as the main culprit when we find ourselves reverting to behaviors we want to change.

The main takeaway from Porter’s analysis is that we are not powerless over cravings and that having awareness of how the stages will progress gives us the chance to stop the cycle from reaching the point of engaging in behavior we want to avoid.

It all starts with our mindset. With drinking, it’s a simple (but not always as easy) mental step where we fully commit to the idea that we are without question, unequivocally, may lightning strike us dead…not drinking. There is simply no other alternative. This small but mighty step ensures that like the lottery example, there is not going to be any fantasy-to-action conversion. This ‘burn the boats’ mentality that alcohol will not be had is an airtight capsule that will not allow Stages 2, 3 and 4 to enter into the equation. The subconscious will never factor in because there is no indecisiveness it needs to put to rest. Only we can do this for ourselves though, and it takes genuine authenticity to self; not the 50/50 version you may give to someone else in your life where you make half-hearted pledges to make some improvements but deep down you’re not truly that interested in changing…more likely you may be more interested in just changing the subject!

An example of the full-stop mindset can easily be found with expectant mothers. There are always exceptions of course, but statistically speaking women who are pregnant are locked and loaded with the mindset that drinking is off the table for the next nine months or so. In a lot of cases, the mom-to-be is very vocal in expressing her impatience to “get this margarita party started as soon as this baby is born” but this is just harmless fantasizing as they know deep down that they will not be having that margarita party while they’re expecting.

If developing that ironclad mindset is Action #1 to stop the destructive cravings from progressing, then the second step in your personal accountability goal to change your drinking is to have a plan in place to distract yourself from the initial cravings when they pop up. If you know that around 5 p.m. it’s normally Miller time, around that time you will likely start thinking about drinking. Plan on going for a walk or run or any other activity that will disrupt the normal routine that involves drinking. Essentially you will be reprogramming the code that your internal operating system is running and the new habits you add to your life will replace the old habits, causing the cravings to subside.

I’ll wrap up this column by simply saying that if you feel like your drinking is starting to get a little bit out of hand, then it almost certainly is. If you find yourself in the category of ‘growing concerned’ (or the people around you are pointing out your drinking is concerning to them) then I emphatically suggest you give yourself a break from the booze for a month or so. Whether you choose to try this mindset change method or one of the more conventional programs like AA, the best method is the one that works for you. Aside from the fantastic feeling that comes from achieving the goal of becoming the version of yourself that you aspire to as a bonus, you’ll sleep, look, and feel 100 percent better while boosting your immunity levels at the same time. In this Covid-19 world, all those life improvements are worthwhile pursuits!

Eric Bartosz is the founder of BAR40 and the author of the internationally-acclaimed book BAR40: Achieving Personal Excellence.

Eric lives in Center Valley with his wife Trish, daughter Riley and pug Piper, and serves the community as an Upper Saucon firefighter, a board member of Big Brothers Big Sisters of the Lehigh Valley and a local race organizer. Eric is a 20+ year runner and racer and can often be found logging miles on the Saucon Rail Trail.