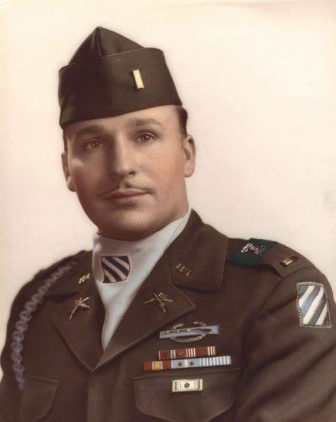 He was the husband of the late Joan C. Walz, who died Jan. 2, 1992. Harold was born in Philadelphia on Aug. 13, 1929 to the late Herman and Lena (Arnold) Walz. He served our country faithfully in the Marines from 1949 to 1950 and then in the U.S. Army during the Korean War from 1951 to 1953. Harold was a Second Lieutenant serving as a platoon leader who was honorably discharged and awarded a Bronze medal. Before re-entering the military, Harold attended Wyomissing Polytechnic Institute, from which he graduated in 1950. After his active duty service ended, he attended Penn State University, where he was a member of Sigma Pi fraternity. A member of the Class of 1957, that same year Harold was a member of the Penn State University National Championship Soccer Team. He was known as “Dutch” to his fellow teammates, and was so proud to be a part of the team. Harold worked as a mechanical engineer for Sunbeam, Chicago, Ill., Follett Corporation, Easton, Pa., and the former Pennsylvania Optical, Reading, Pa. Later in life he worked in the tool department at Sears, Easton, for 17 years, working until he was 90 years old. Harold only retired because the store closed and he “officially” became retired. He was a member of Single Action Shooting Society (“SASS”). His shooting alias name was “Double Nickels,” and it was a hobby he truly enjoyed. In his younger days he was active with the Boy Scouts of America and enjoyed doing pen and ink drawings, remodeling old cars, restoring old furniture, building furniture and fixing anything he could. Harold was a man of many talents and a man to whom people gravitated. Strangers would walk up to him and just start talking to him and he would welcome the conversation. He always had a kind word to say, never raised his voice and always tried to be kind towards others. Known by many as the “Gray-haired wizard (GWH),” he always had a few words of wisdom to share, no matter the topic. Harold was loved and respected by many people, all of which filled his life.

In lieu of flowers, memorials may be made to SASS Scholarship Foundation, 215 Cowboy Way, Edgewood, NM 87015.