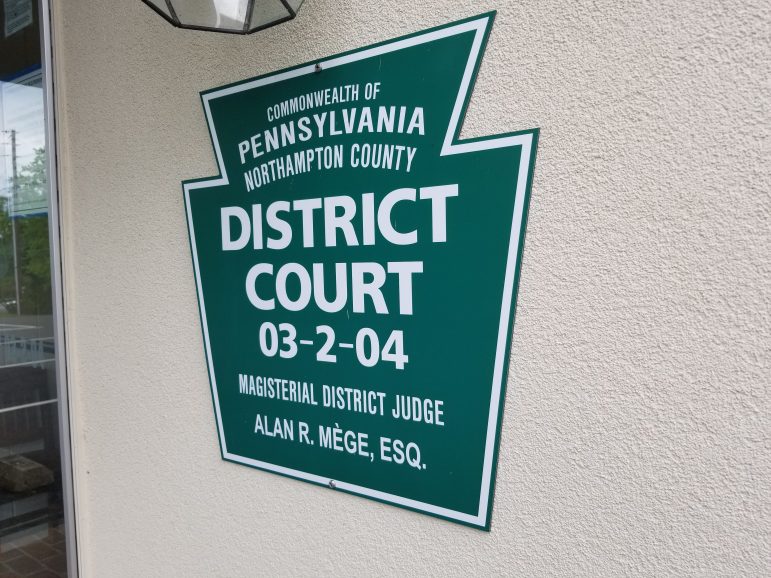 A preliminary hearing for Christopher Painton, 32, of Hellertown, is scheduled to be held Tuesday, May 18 at 3 p.m. before Northampton County District Judge Alan Mege in Lower Saucon Township.

A Hellertown police officer was assaulted and feared being choked unconscious during a struggle with a man he was trying to arrest following an alleged domestic incident last week, court documents say.

The affidavit of probable cause in the criminal complaint filed in Northampton County District Court by police said the incident began April 29 around 11:30 p.m., when an officer was dispatched to the 100 block of Northampton Street for “a domestic in progress.”

Upon his arrival police said the officer spoke with a man who had been in a physical altercation with his brother.

According to the affidavit, Christopher Painton, 32, “got into a physical altercation inside the residence due to (his brother) insisting that (he) go to rehabilitation and due to (Painton) making a large mess in the kitchen.”

In the affidavit, the officer said he observed an abrasion on the brother’s hand that allegedly resulted from the fight.

When the officer approached the home’s front door, he said he was met by Christopher Painton, who he observed to be “disconnected with his surroundings” and apparently “under the influence of a drug or drug combination.”

Painton “was not responding normally to questions and had extremely large pupils,” the affidavit continued.

When Painton tried to go inside the house, the officer said he tried to stop him by grabbing his shirt. Painton then allegedly grabbed the officer’s left wrist in an attempt to remove his grip from the shirt, before grabbing his right wrist and struggling with him.

“During this struggle Christopher Painton just continued to say ‘no,'” the court papers said.

After they struggled, the officer said he backed away from Painton and tried to speak with him, telling him he was being detained as part of a domestic assault investigation.

Painton then allegedly tried to walk away a second time, “refused to obey commands and continued to leave the scene,” which resulted in a second struggle, the affidavit said.

The officer said he was able to put one handcuff on Painton before losing control of it as Painton allegedly began to thrash the cuff, cutting the officer’s hand in the process.

At that point, the officer said he “was in fear that he may be choked until unconscious.”

Thanks to the assistance of a bystander, the affidavit said, the officer regained control of the situation and was finally able to put Painton in handcuffs.

Painton is charged with Felony 2 aggravated assault, Misdemeanor 2 resisting arrest, Misdemeanor 2 simple assault and summary harassment, according to the criminal court docket for his case.

As of Tuesday he was incarcerated at Northampton County Prison in lieu of $25,000 straight bail, with a preliminary hearing scheduled to be held May 18 at 3 p.m. before District Judge Alan Mege, the docket indicated.

Court papers did not list an attorney for Painton.