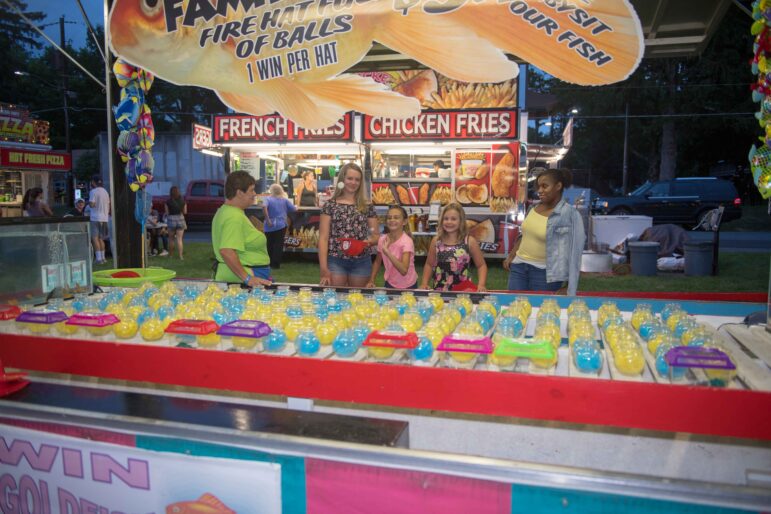 Games of chance, rides and fun food like cotton candy are all part of the appeal of the Dewey Fire Co. Carnival, which will be held in Hellertown’s Dimmick Park from July 13 to July 17. New for 2021 are live bands and a beer garden. (FILE PHOTO)

After a hiatus due to the coronavirus pandemic it’s carnival season once again, and local fire companies are looking forward to raising funds while giving families a chance to enjoy summer fun close to home.

Dewey Fire Co. No. 1 in Hellertown will hold its carnival from Tuesday, July 13 to Saturday, July 17, from 6 to 10 p.m. daily in Dimmick Park, next to the fire station.

In addition to the rides and games of chance that will fill the midway, the fire company has expanded the event for 2021 to include live bands each night and beer/drink garden.

Each night will also have a theme.

Visitors to the carnival can also enter raffles and a vendor fair.

Wristband nights–when kids can ride an unlimited number of rides with the purchase of a wristband–will be Tuesday, Wednesday and Thursday.

In addition to traditional carnival fare, fire company members will be able to enjoy food and drink at Frontline at the Dewey, which opened at the fire station in the spring.

According to a carnival flyer shared by Dewey Fire Company on their Facebook page, the carnival is the company’s main annual fundraiser, and has been held since 1915.

The costliest component of the carnival is the annual fireworks show, which is typically held in the park at the conclusion of Friday night’s festivities.

Last year the company raised a significant amount of money to pay for a show that was held at Steel Club in August, due to restrictions on public gatherings in place at the time.

Many local individuals and businesses contributed to the 2020 fireworks fund, and nearly $20,000 was raised to help pay for last year’s show. Money that was left in reserve after last year’s show was paid for was to be put toward this year’s fireworks show, and the fire company is currently raising money via a GoFundMe page for future shows, which cost approximately $12,000 to stage, according to the fire company.