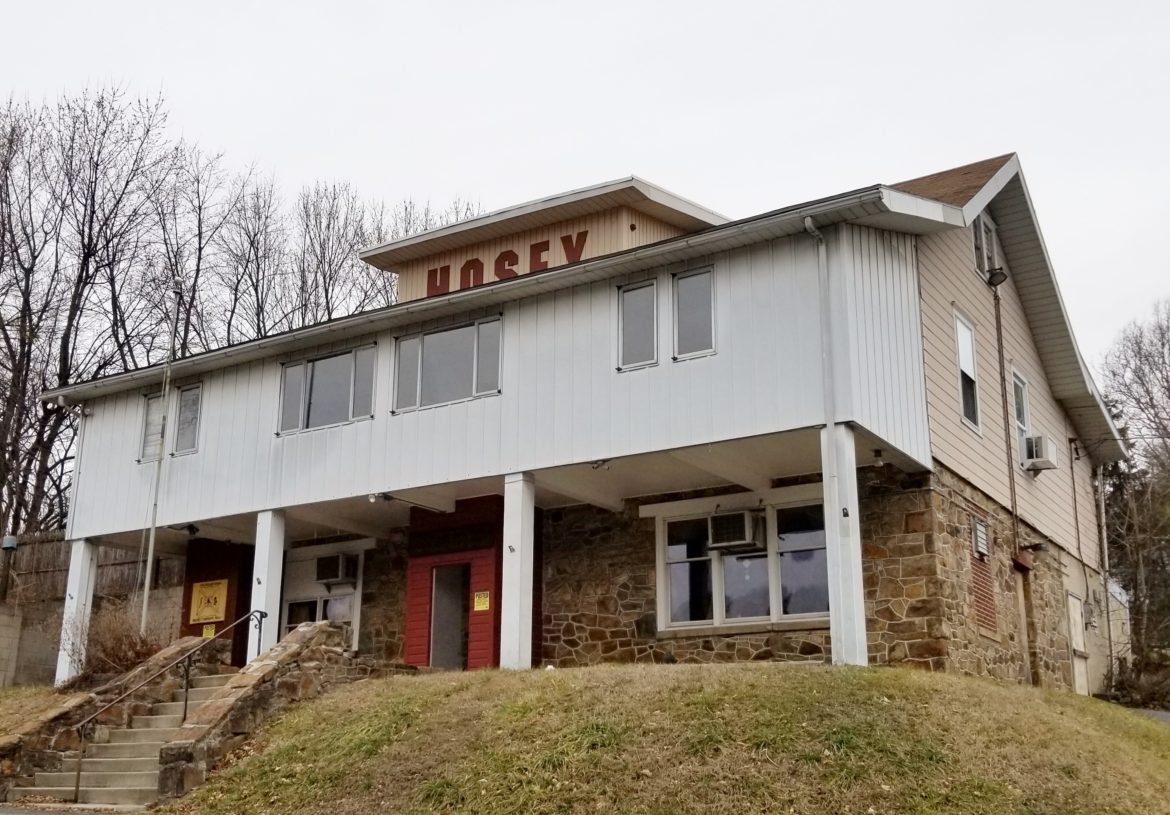 Ashley Development Corporation's plans for an 18-unit age-restricted apartment complex at 1336 Russell Avenue received approval from Fountain Hill Borough Council on Monday night. The property is the former site of the Hosey social club, which closed in 2017.

Members of Fountain Hill Borough Council approved a land development plan for a proposed 18-unit age-restricted apartment complex at the site of the former Hosey social club on Monday night.

The borough sold the property to Ashley Development Corporation in January 2020 for $215,000, less than a year after the borough purchased it with the idea that a new police station and offices might be built on the 1.02-acre property at 1336 Russell Avenue.

A representative from Ashley Development, Gabe Solms, said his firm purchased the property with the intention of constructing apartments to serve the age 55-and-over community, a population he said is underserved in the current real estate market.

“They want to downsize. They don’t want to deal with the maintenance of owning a house, and they’re looking for a one or two-bedroom apartment that they can afford,” Solms said at Monday night’s borough council meeting. “Maybe they’re on a fixed income at this point, and there honestly, at this moment, is not much supply.”

In March of last year, a representative from Ashley Development said 10 of the proposed units would be one-bedroom apartments and the remaining eight would be two-bedroom units. All 18 units would be contained in a single, nearly 24,000 sq. ft. three-story structure.

The property currently contains the structure that formerly was the Hosey building, a covered picnic pavilion and parking spaces. The developers received a special exception to demolish the former Hosey building in the spring of last year.

Since then, Solms said his firm has been working with verious individuals and organizations to develop the plans they presented Monday night, including Fountain Hill’s borough engineer and fire marshal, the Lehigh County Conservation District and the City of Bethlehem.

The three-story building is proposed to be constructed on the northern end of the property, according to Sean Dooley of Keystone Consulting Engineers. The existing parking lot would be expanded to provide 36 spaces, which Dooley said is in accordance with Fountain Hill’s ordinance requiring two spaces per apartment.

Prior concerns about the development revolved around the size of the parking lot and whether borough emergency response vehicles would be able to effectively navigate it.

Dooley said the new plans include a turnaround easement, “which allows the use of the drive aisle in the parking lot, so that it effectively functions as a cul-de-sac.”

He added that the geometry of the easement was designed around a City of Bethlehem fire engine, which is larger than Fountain Hill’s ladder truck.

Dooley also mentioned that he worked with the fire department to ensure that space is provided around the building to accommodate for manned ladder access where the property’s slope prevents fire engines from accessing it.

He said a second fire hydrant will be added to the property to aid the fire department’s response to a potential fire in the building. 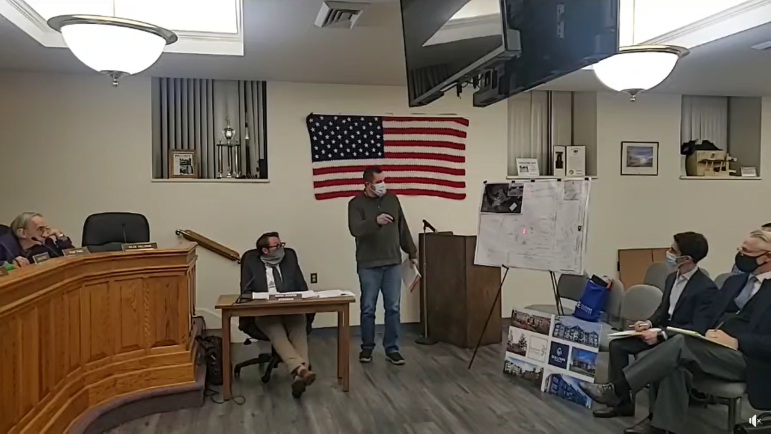 “Fire Marshal Anthony could not make it tonight, however he and I spoke a couple hours ago, and he is satisfied with all the alterations they have made from the fire department perspective as far as code and access,” Fountain Hill Borough Manager Eric Gratz said.

Dooley said the traffic impact on the surrounding community should be minimal.

“With respect to 55-and-over, from a traffic standpoint we would expect the traffic to be lower than a conventional development,” he said, adding that pressure on the school district in terms of additional enrollment will also be minimal.

Dooley said the development’s plans for stormwater mitigation include the installation of two underground tanks behind the apartment building. His firm calculated that the detention from those two tanks will sufficiently keep discharge to the stormwater inlet on Russell Avenue at or below pre-development levels. 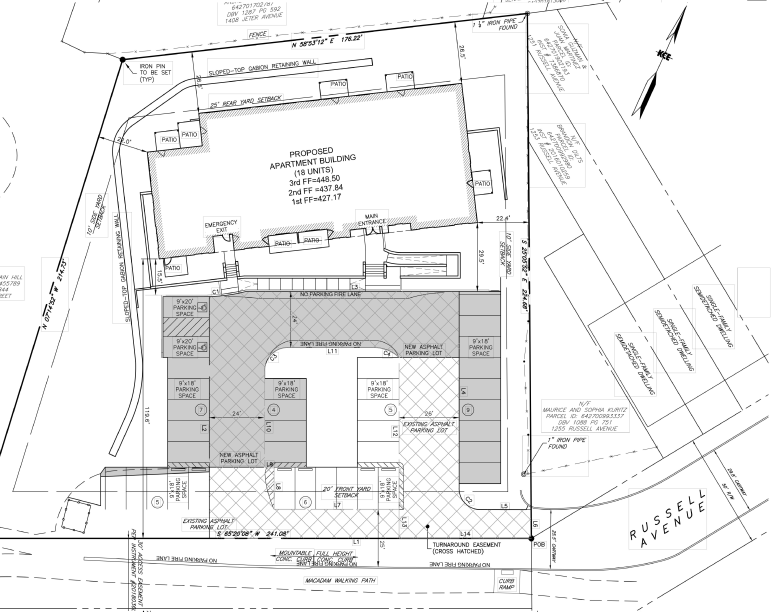 Sketch plans for the proposed 18-unit apartment complex were presented at Monday night’s borough council meeting. The three-story apartment building will be adjoined by a 36-spot parking lot and an easement, which will allow it to effectively function as a cul-de-sac.

Fountain Hill’s borough engineer Brad Youst told those in attendance Monday night that he thought the most recent development plans adequately addressed the borough’s prior concerns.

“We’re satisfied that they’ve done everything they can to bring the first edition of the plans up to a higher level that we were looking for in the reviews from a year ago,” Youst said. “Subject to the various items that need to have final clarifications, (such as) outside agencies’ letters received eventually, agreements and other documentation for recording, we’re satisfied down to the last couple of minor items that Sean (Dooley) mentioned.”

The first waiver is a request to submit a combined preliminary-final plan instead of separate plans. Dooley said this waiver was recommended by members of the borough’s planning commission.

The second waiver would allow the proposed development to exceed the borough ordinance’s limit of 25 dwelling units in a cul-de-sac.

Eight dwelling units currently exist along Russell Avenue to the east of the former Hosey property. The 18 proposed units would bring the total dwellings on the street to 26, one above the amount permitted by the borough’s ordinance.

Dooley argued that the waiver request is reasonable since 18 of those units would be contained in a single apartment complex.

In his experience, he said, a limit on dwellings contained by a cul-de-sac is usually a function of street length, which is not a factor in this case since the proposed development would not require a major extension of Russell Avenue, Dooley argued.

“As (Dooley) mentioned, a lot of times it’s the combination of the number of residents and the length of the street that you would have,” Youst said. “This really is not extending Russell (Avenue) by much, even if you consider the easement on the borough property and extension of the street, so I don’t have a problem with the number being 26 instead of the required 25.”

Youst also supported the waiver allowing preliminary-final plans, saying that many developers try to combine the plans when possible.

“It makes sense to put them together once you have a good enough feeling that the borough or municipality is interested in the plan,” Youst said.

Following the developer presentation, members of borough council voted unanimously to grant the waivers by a vote of 4-0. Councilmembers Rufe, Johnson and Halleman were not in attendance Monday night.

The four members in attendance then voted unanimously to approve the development plans, conditional upon the developers addressing remaining comments made in a Dec. 1 letter from Youst.