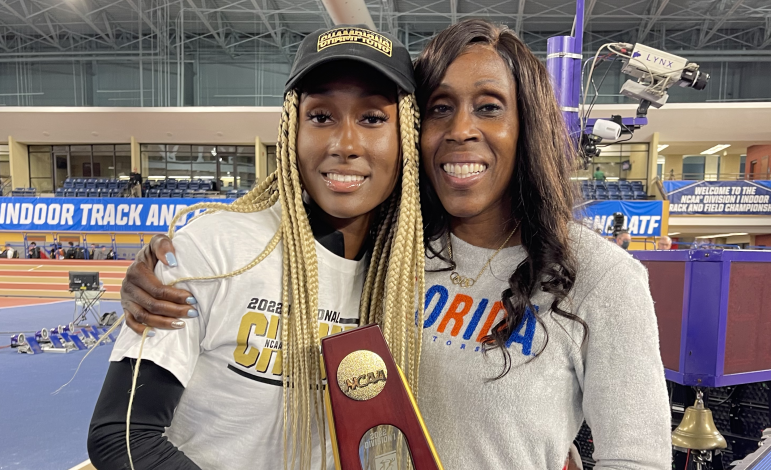 Saucon Valley graduate Talitha Diggs and her Mom, Joetta Clark Diggs, celebrate her victory in the the women’s 400-meter at the NCAA Indoor Track and Field Championships held at the CrossPlex athletic facility in Birmingham, Ala., March 12.

When Talitha Diggs crossed the finish line in 50.98 seconds on Saturday, March 12, to claim the women’s 400-meter title at the NCAA Indoor Track and Field Championships at the CrossPlex athletic facility in Birmingham, reverberations were heard far beyond the Alabama borders.

They resounded in at least five other states:

The best guess is that in not much more than 50.98 seconds, the sport’s stats-keepers were penciling-in Talitha Diggs as a red-hot candidate for Team USA 2022, not just in the individual 400 meters but also in two of the 4×400 relay events (all-women and mixed men and women) now on the Worlds slate of events. And as a major candidate for the Paris Olympic Games of 2024, too.

“Yes, it was exciting to be there and see it all,” said Joetta Clark Diggs, just back from
Birmingham. “Talitha ran a great race in the final. She made us proud.” 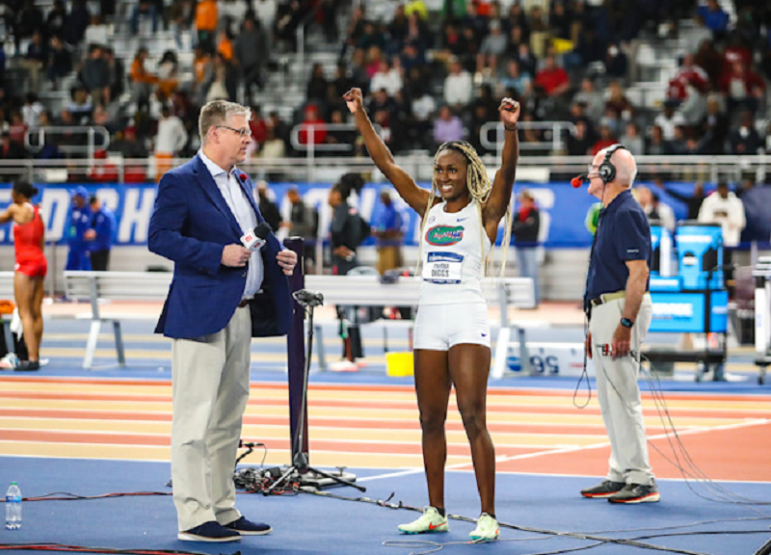 Talitha Diggs reacts after winning the 400-meter title at the NCAA Indoor Track and Field Championships at the CrossPlex athletic facility in Birmingham, Ala., March 12.

Diggs’ 50.98 was a personal best-ever indoor clocking and she won the event decisively over Kennedy Simon of Texas, whose runner-up 51.46 was also a personal best.

The 50.98 was not an NCAA indoor meet record; that still belongs to Southern Cal’s Kendall Ellis, who ran 50.34 in 2018. But it may have been something more important.

“It made us the first mother-and-daughter pair ever to win NCAA individual-event track and field championships,” said Joetta, whose pride keeps reaching record-breaking levels. “I think she’s got a pretty good future in the sport.”

Talitha Diggs made a brilliant collegiate debut as a Florida freshman in 2021, and her 50.74 outdoor best ranked 28th in the world and 10th in the USA. To top that off, she was an All-Academic honoree.

At the 2021 NCAAs before heading into the USA Final Trials for the year-delayed Tokyo Olympic Games, she ran second to eventual Olympic 800 gold medalist Athing Mu of Texas A&M in the final. At the Trials she easily advanced out of the first round, but bowed out in the semifinals and then saw Quanera Hayes take the final in 49.78.

For Diggs, just getting that far was a major achievement at the age of 18.

As track people know, only time will tell what golden possibilities lie ahead for her. Nothing is ever a given in this what-have-you-done-for-me-lately sport.

Now, back to Birmingham.

Diggs’ 10 points and her teammates’ 58 more gave the Gators their second-ever NCAA indoor team title, with Texas (56), Kentucky (44), Arkansas (40) and LSU (29½) next in line, as 59 schools wound up in the scoring column with at least a single point.

As Gator publicists wrote, “Florida held a slim lead heading into the second day of the meet, but blew the competition out of the water on Saturday evening, winning the team title with three events to spare….”

The Gators home five won individual titles (hurdler Grace Stark, long-triple jumper Jasmine Moore and pentathlete Anna Hall won the others) and that was just the second time that’s happened in the history of the NCAA Women’s Indoor championships.

“The Gators wrapped up the team race (68 points) before the start of the 200 meters, allowing Florida the ability to watch the final three events before the trophy celebration,” the publicists noted.

This NCAA Championship is the 11th in Gator program history and the second won by the women’s team. It was also the 10th team title won under the leadership of head
Coach Mike Holloway.

Bottom line: For Talitha Diggs and all the Florida Gators, even better things are just ahead.

There will be lots more to celebrate by then. Count on it. 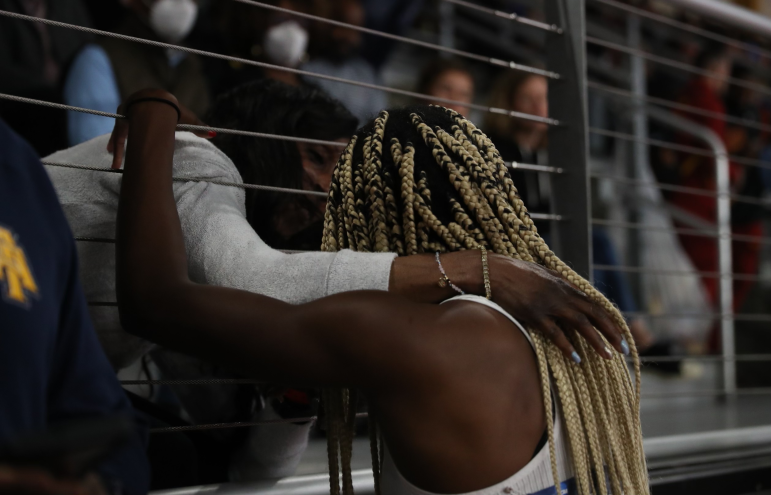