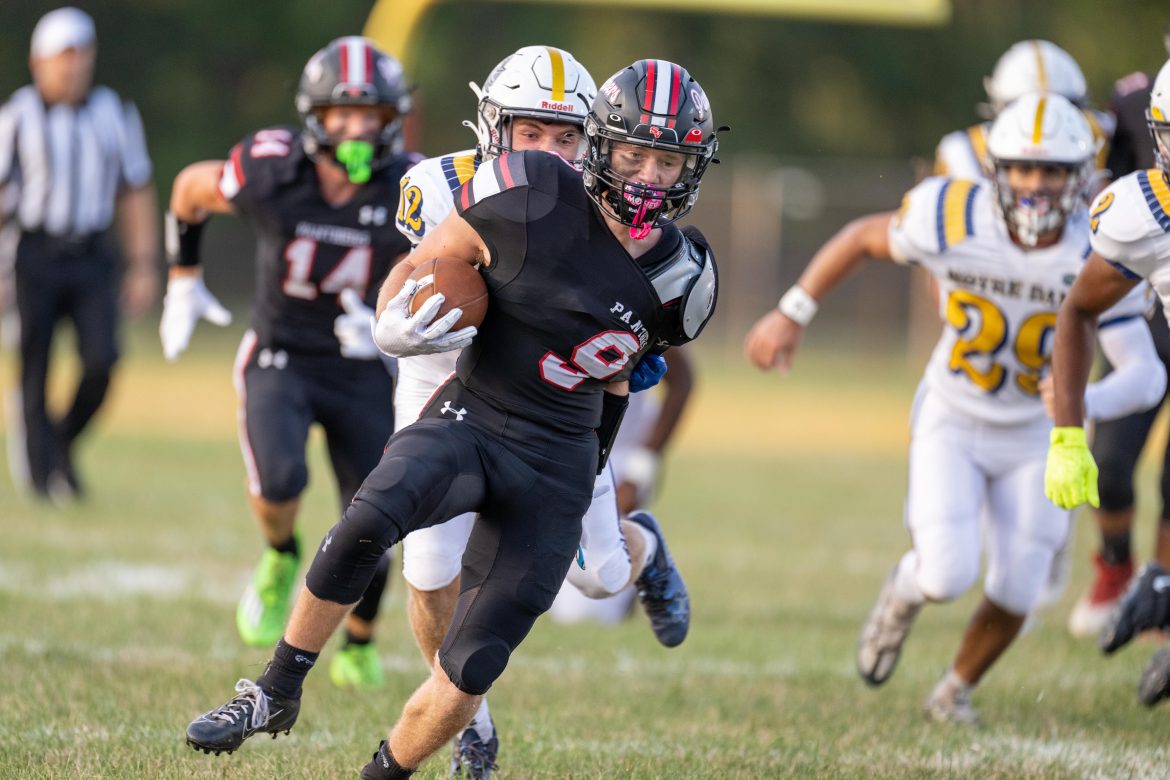 The Saucon Valley Panthers and Notre Dame Green Pond Crusaders have had a colorful history of intense competition the past few years.  Perhaps it is the public school v. private school recruiting debate?  Perhaps it is the proximity of the two schools?  Maybe it is that the two sports programs have faced off in more than a few fierce battles in recent memory.  It is probably all of those things combined that gets the players and fans all fired up.  Well, whatever it is,  Friday night’s high school football clash did very little to dampen that turbulent relationship.  It was a bit of a slow start, but as the night wore on the Panthers and Crusaders treated those in attendance to a hard-hitting and entertaining contest that added up to 75 points scored and about 900 yards of combined offense. 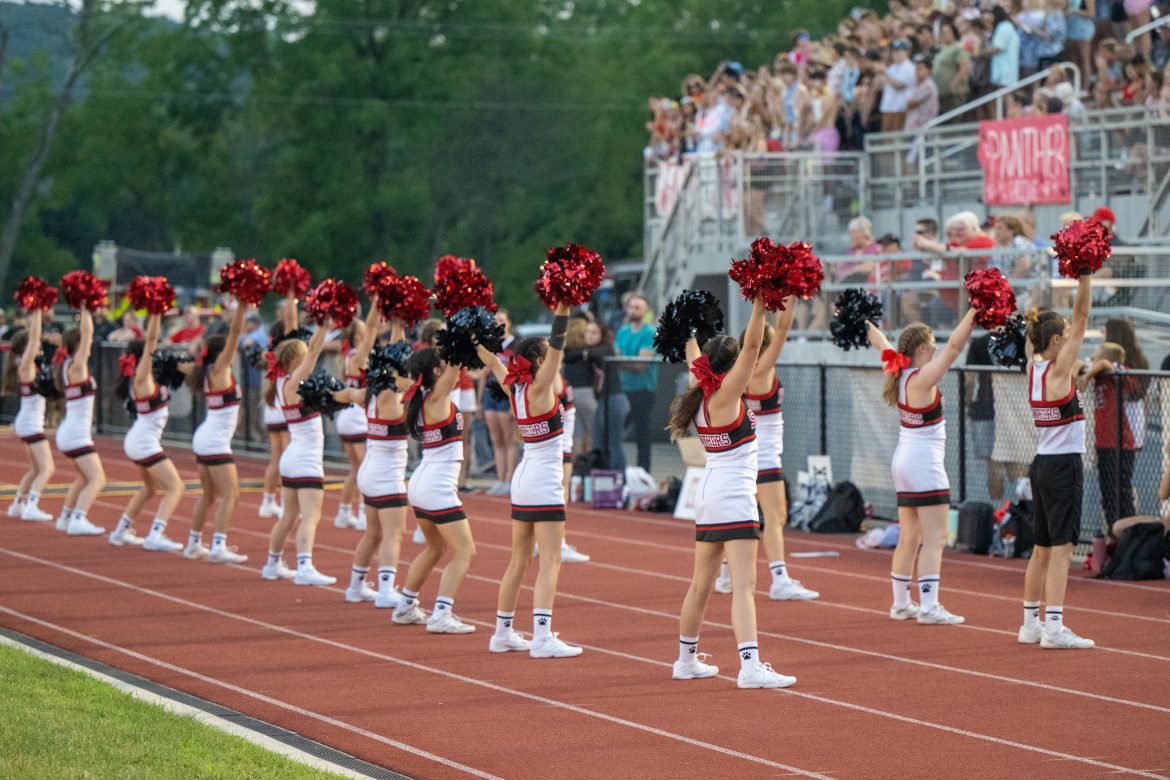 Saucon Valley started the game with the ball at their own 31-yardline.  The Panthers went right at the Crusader defense smash-mouth style. After ten straight running plays, Saucon found themselves licking their chops with 2nd & Goal from the Crusader 1-yardline.  The sweet taste of a score quickly turned sour when Panther quarterback Travis Riefenstahl lost the handle on the football with what looked to be a QB sneak.  Notre Dame alertly pounced on the loose ball and snuffed out the good fortune in Saucon’s opening drive.

The teams kept the scoreboard quiet as they exchanged possessions throughout the rest of the first quarter.  Notre Dame turned the ball over on downs and fumbled to the Panthers while the Panthers punted and, again, fumbled back to the Crusaders.  The second Panther fumble, however, proved costly as Notre Dame capitalized with a 10-play, 38-yard scoring drive that ended with a Crusader 2-yard touchdown run off left tackle by junior quarterback Dan Darno.  The PAT was good and less than a minute into the second quarter Notre Dame was up 7-0. 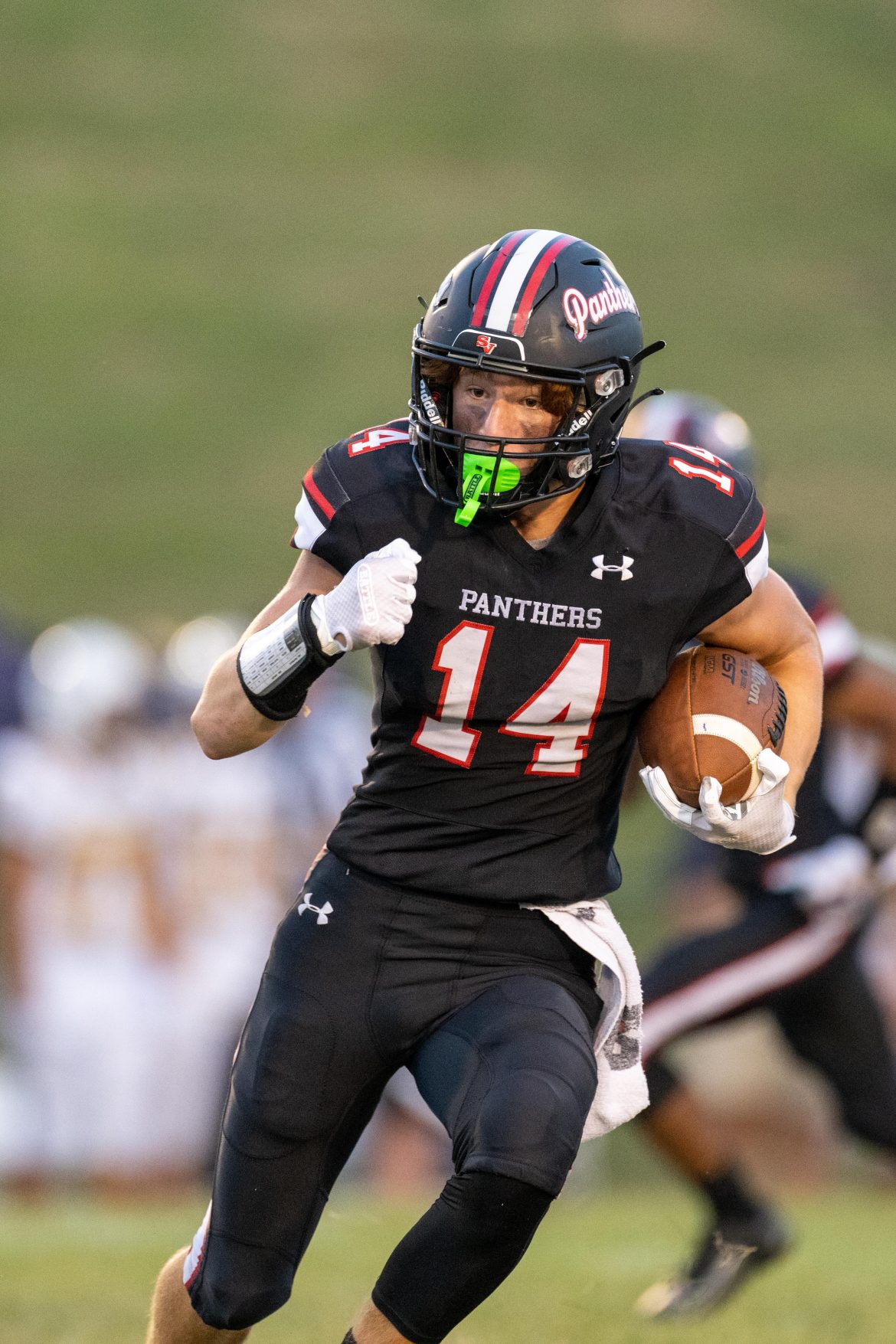 Saucon sophomore Jack Robertson (14) came up big for the Panthers against the Notre Dame Crusaders in the 2022 season opener.

The Panthers roared right back less than a minute later with junior Landon Beckoswki’s 20-yard touchdown run to tie the score.  Beckowski’s score was set up with Jack Robertson’s catch and run.  Riefenstahl found Robertson running free in the seam of the Crusader defense for a 53-yard gain.  One play later Beckowski hit paydirt.  Braeden Schriffert was good with his PAT and with 10:32 remaininguntil halftime the score was even at 7-7. 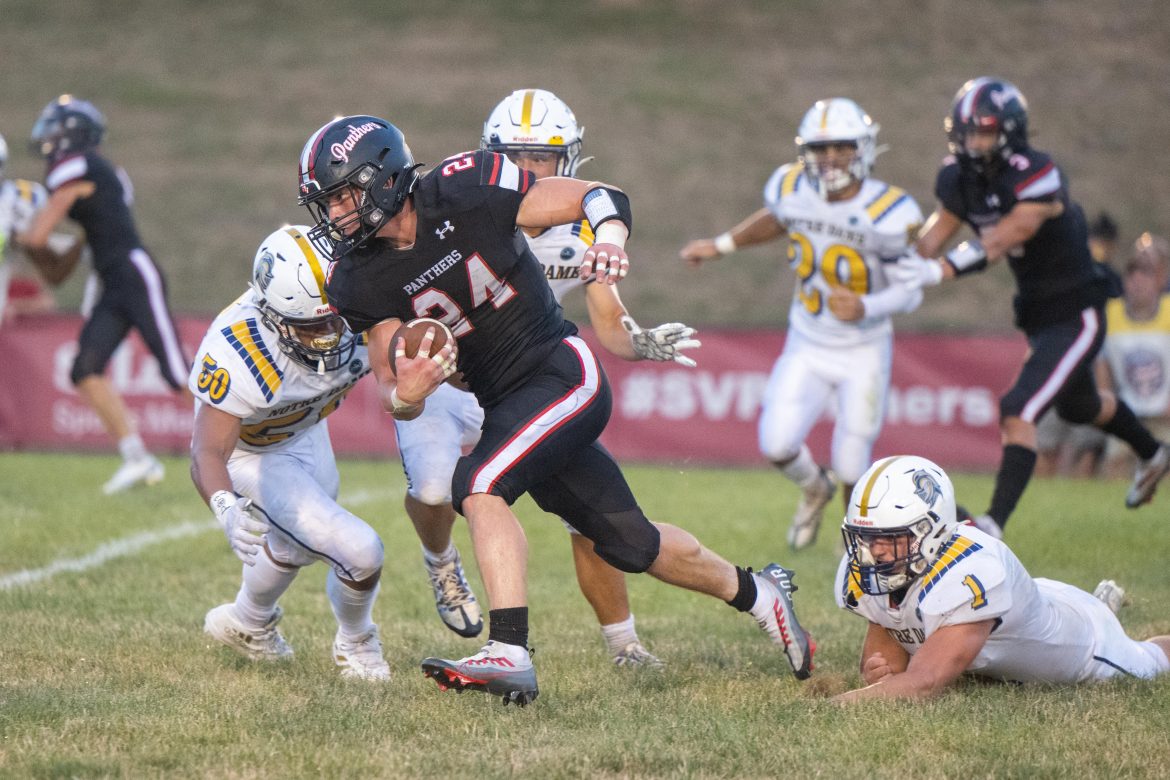 Saucon Valley junior running back Landon Beckowski (24) got the Panthers on the scoreboard with a 20-yard TD run.

The rest of the second quarter, however, belonged to the Crusaders.  Notre Dame scored a 7-yard touchdown run by Dain Vasalla at 5:32 and a 20-yard run by Josh Ludlow at 2:48.  The Crusaders could not convert either PAT and took a 19-7 lead.

As the Panthers struggled to find a consistent rhythm, the Crusaders connected with a power punch at 1:55 to close out the 1st half.  From their own 36-yardline, Darno found Ludlow on a little pitch and catch that went big.  Darno hit Ludlow on a 5-yard out route that quickly turned into 64-yard touchdown reception.  Darno found the end zone on the 2-point conversion extending the Crusader advantage to a 27-7 halftime lead.

With Notre Dame to receive the opening kickoff of the second half it seemed to all but the most optimistic Panther fans that the Crusaders were in complete control of the game.  However, Saucon Valley proved to be a bunch of four-quarter-fighters.  There was time on the clock and competition was unfolding.  There was still a game to be played and the Panthers were not finished. 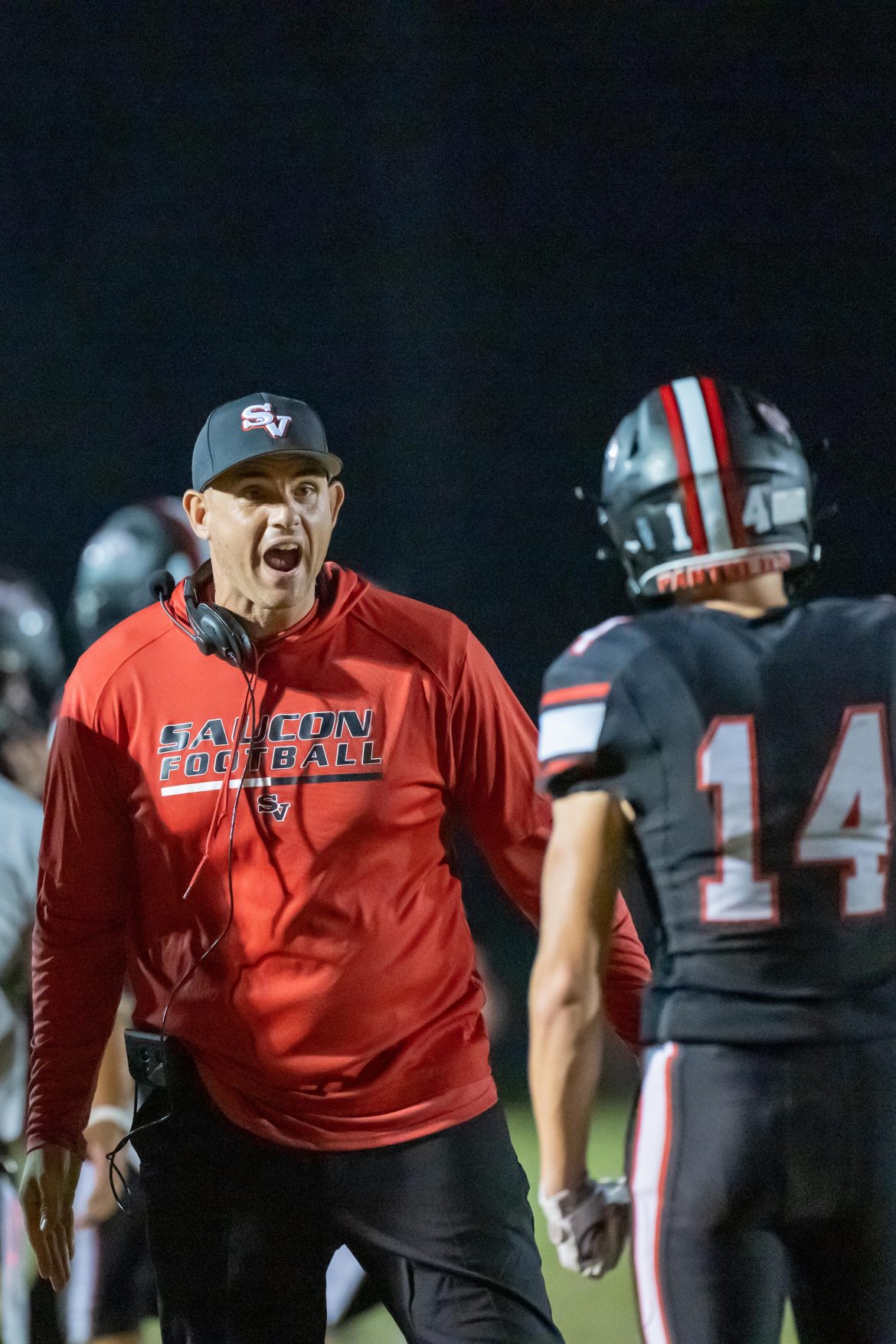 Saucon Valley Head Football Coach Brad Trembler had his work cut out for him trailing the Notre Dame Crusaders 27-7 at halftime.

Notre Dame took possession at their own 29-yardline to start the second half but were quickly backed up their own 5-yardline with a high shotgun snap that buzzed beyond Darno’s reach.  The Crusader’s could not dig out of the 2nd & 34 hole and were forced to punt.

On a drive that started at the Notre Dame 35-yardline Saucon eventually lit the scoreboard when Riefenstahl found senior Alex Magnotta as he split the Crusader safeties on a post route that ended in the Panther end zone.  With six minutes left in the third quarter, Saucon willed their way back to a 27-14 deficit.

Notre Dame started another march for points on their next possession.  The Crusaders advanced to the Panther 31-yardline and faced a 4th & 2 situation.  Darno looked for a quick throw for a first down but abruptly found some in-your-face pressure by Ty Pfizenmayer who came on blitz from his linebacker position.  Darno was able to get rid of the ball and avoid the sack, but his pass attempt fell harmlessly incomplete with a little over four minutes left in the third quarter. 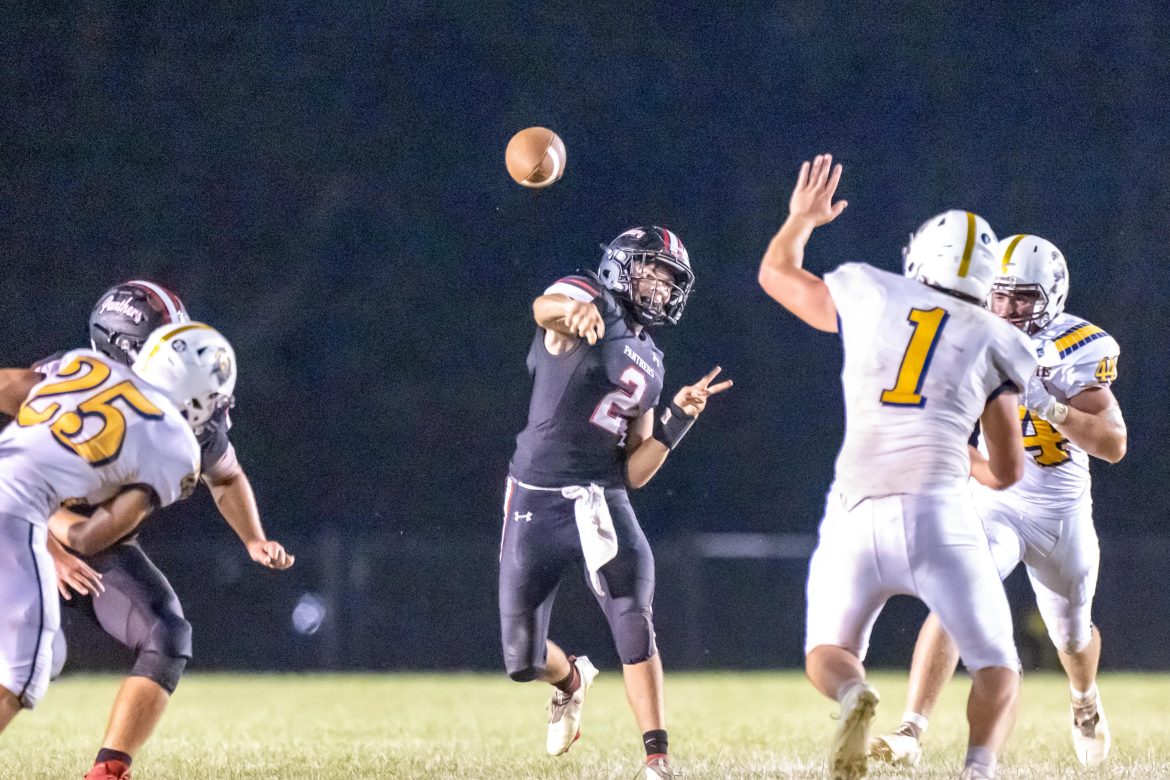 When the Saucon offense jogged back onto the field they went on to manufacture a much-needed scoring drive that was highlighted by a couple of big chunk plays.  The Panthers put 25 yards of hurt on the Crusaders with another Riefenstahl to Robertson connection in the seam.  Another significant chunk came on a 3rd & 11 scramble by Riefenstahl for 19 yards.  The Panthers were rewarded with points on the first play of the fourth quarter when Riefenstahl hit Magnotta for his second touchdown.  Schriffert’s PAT was blocked, but the 9-yard pass and catch into the back corner of the end zone made it a 27-20 game.  The Panthers were down but not out.

Notre Dame punched right back on the next possession with a scoring drive of their own.  Josh Ludlow capped the drive with a 4-yard touchdown run.  The PAT was good and with 8:34 remaining in the game, Notre Dame claimed a 34-20 lead. 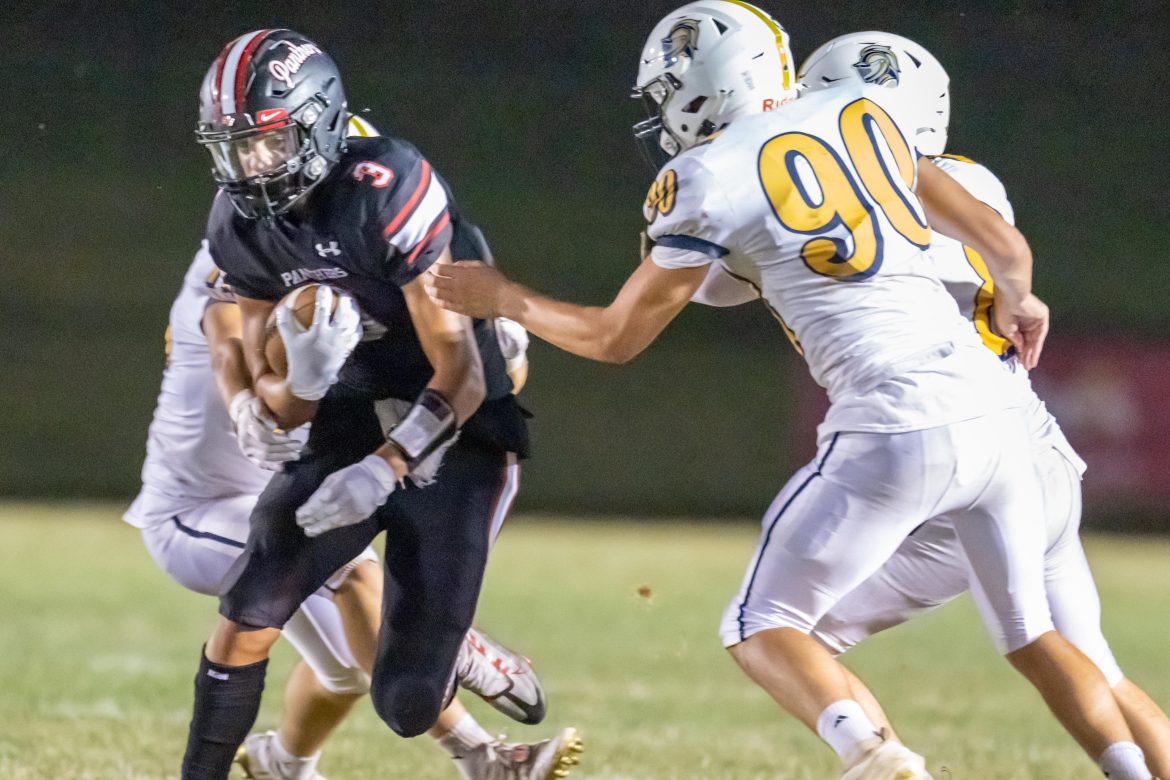 Once again the Panthers courageously battled right back.  This time, with 2:27 left in the game, Saucon Valley was near the end of their rope facing a 4th & 10 at the Crusader 13-yardline.   Riefenstahl dropped to pass but was forced to scramble to his left to get away from the Crusader pressure. As he escaped he hooked up with Alex Magnotta who was making his way across the end zone back toward Riefenstahl.  Magnotta’s third TD catch of the game and a Schriffert PAT brought the Panthers back to within seven, 34-27.

With two timeouts in their pocket, Saucon kicked deep hoping to get a defensive stop.  However, Josh Ludlow had other ideas when he fielded the kickoff and was able to squirt to the sideline where he then tightroped and raced his way all the way to the Panther 3-yardline before being pushed out of bounds.  Ludlow’s big return set up a 3-yard touchdown plunge for Notre Dame and helped extend the Crusader lead to 41-27. 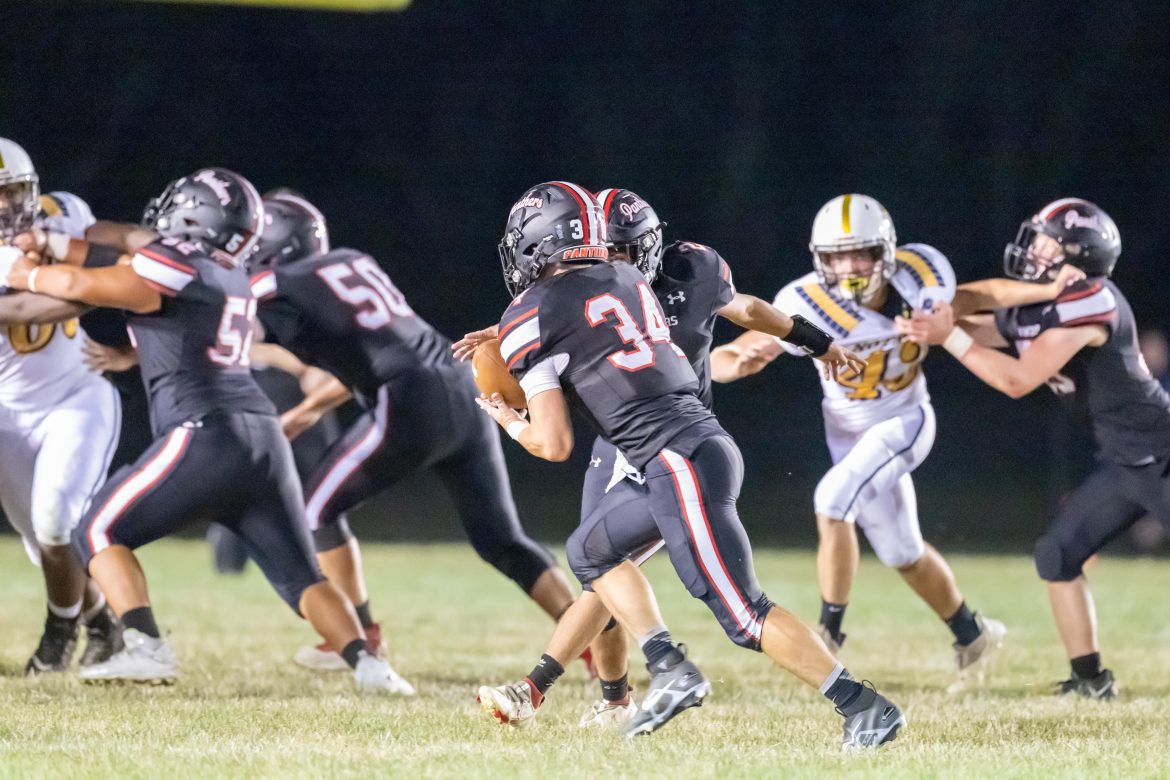 Saucon senior running back Ty Pfizenmayer and his Panther teammates tallied over 200 yards rushing against Notre Dame on opening night.

With 2:02 left to play, the Saucon Valley Panthers once again refused to go down without a fight. Following a sack and two incomplete passes that just missed their mark,  the Panthers faced 4th & 10 from their own 35-yardline.  Riefenstahl took the shotgun snap and rolled to his right where delivered to Jack Robertson on a deep curl route underneath Notre Dame’s prevent defense.  Robertson’s catch to the Crusader 38-yardline was followed  by a Riefenstahl scramble out of bounds after picking up 7 yards.  Then, on 2 & 3 from Notre Dame’s 31-yardline, Riefenstahl rolled right toward his trio of wide receivers.  Riefenstahl abruptly stopped and popped back toward the far corner of the end zone where he found sophomore Jared Rohn running a deep crossing route opposite the play action.  Rief to Rohn along with Schriffert’s extra-point put the Panthers back to within seven at 41-34 with 1:18 left to play.

Of course, the Panthers dialed up an onside-kick attempt, but after bouncing off a Crusader, the ball was secured by Notre Dame to effectively end the game at 41-34.  The Panthers may have lost a tough game, but proved they are going to battle to the end and go the distance.  The Panthers fell to the Crusaders, but their season is still very much alive. 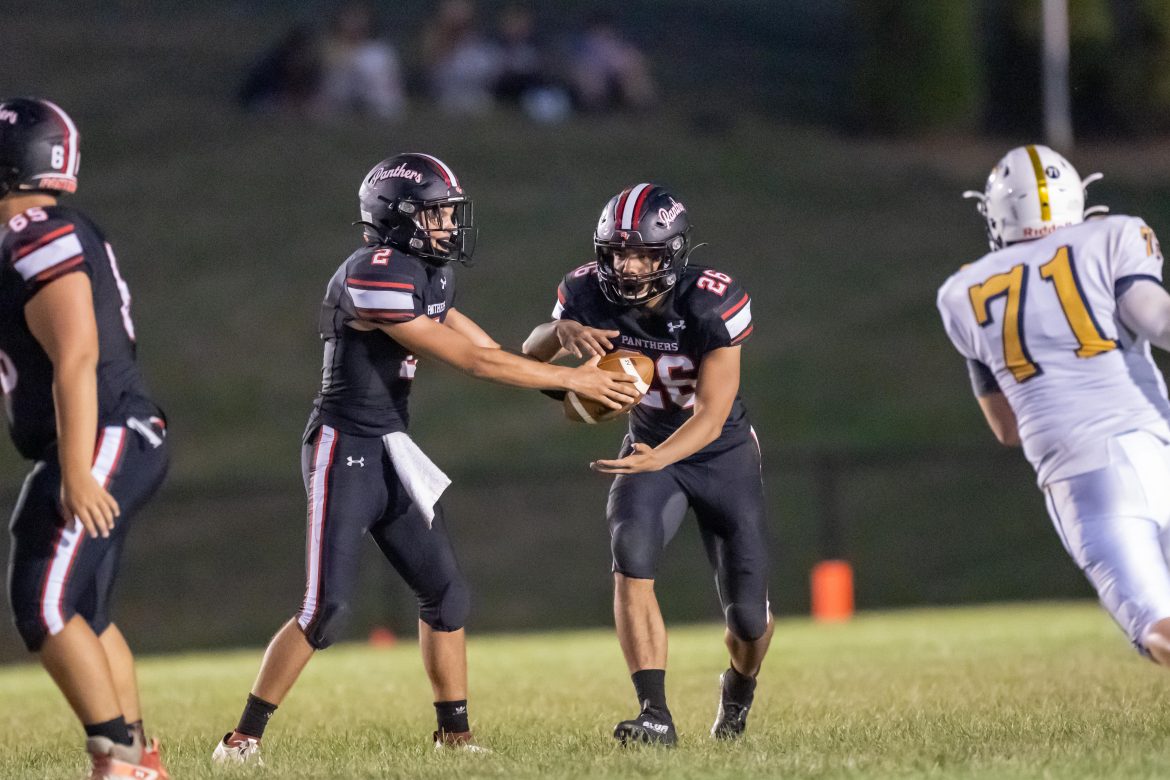 It was running back by committee for Josh Torres (26) and the 2022 Panthers.

UP NEXT:  The Panthers (0-1) will look for win #1 in Hellertown with a Friday night football fight against the Salisbury Falcons (0-1).  Kickoff is scheduled for 7 p.m. 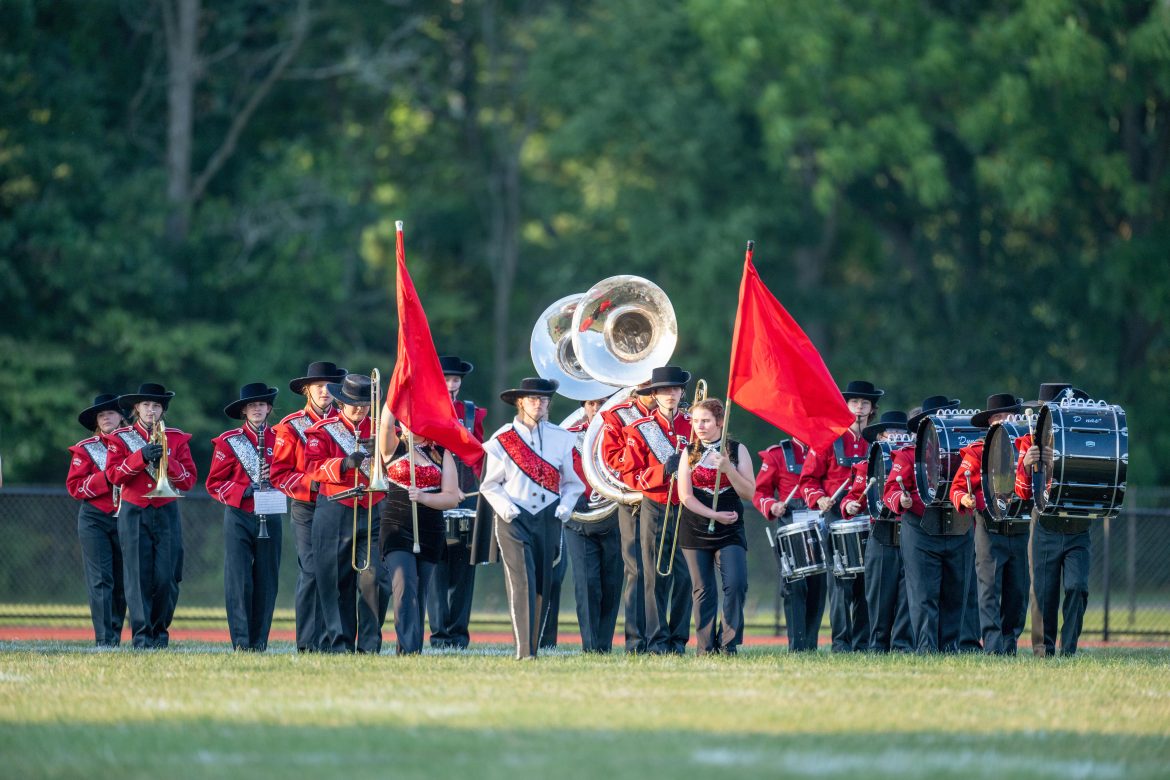 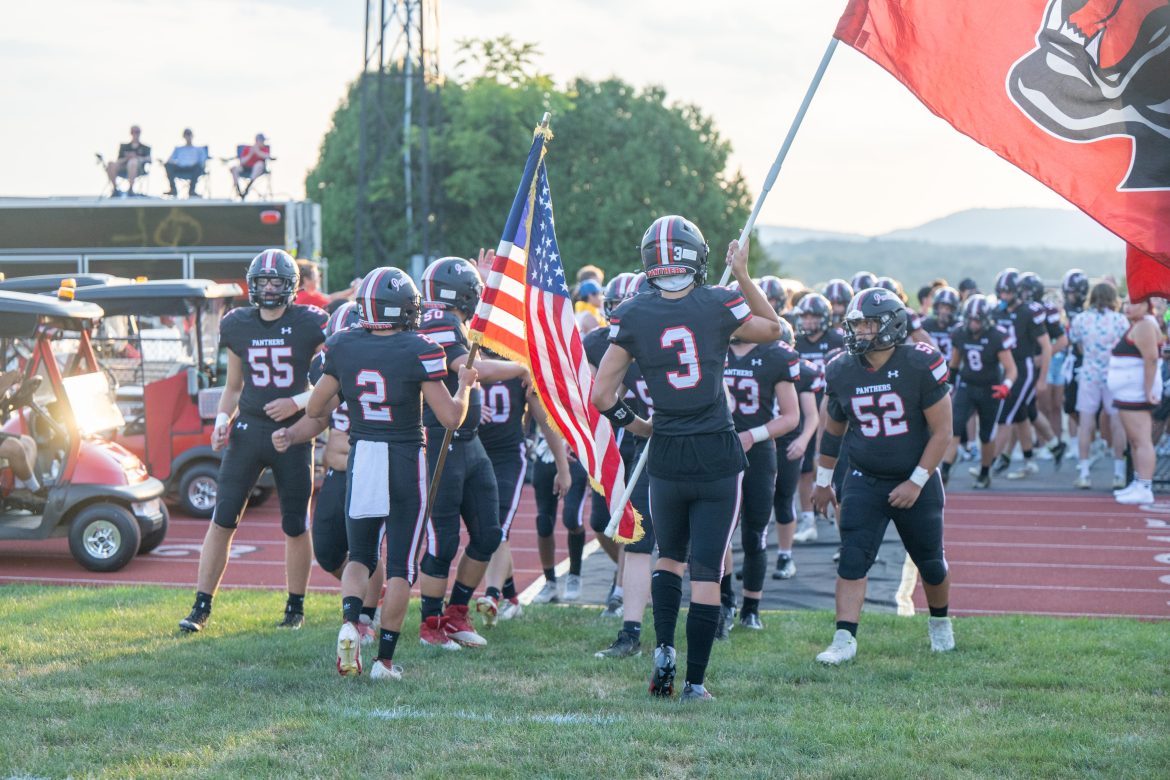 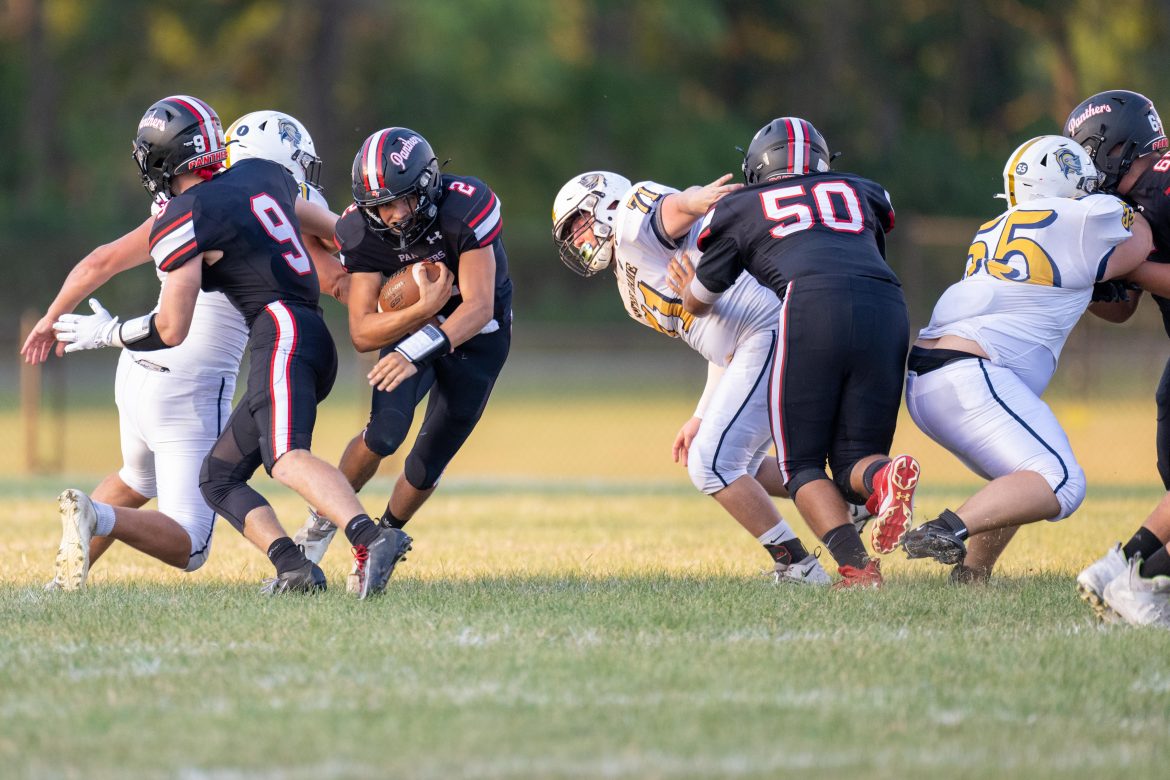 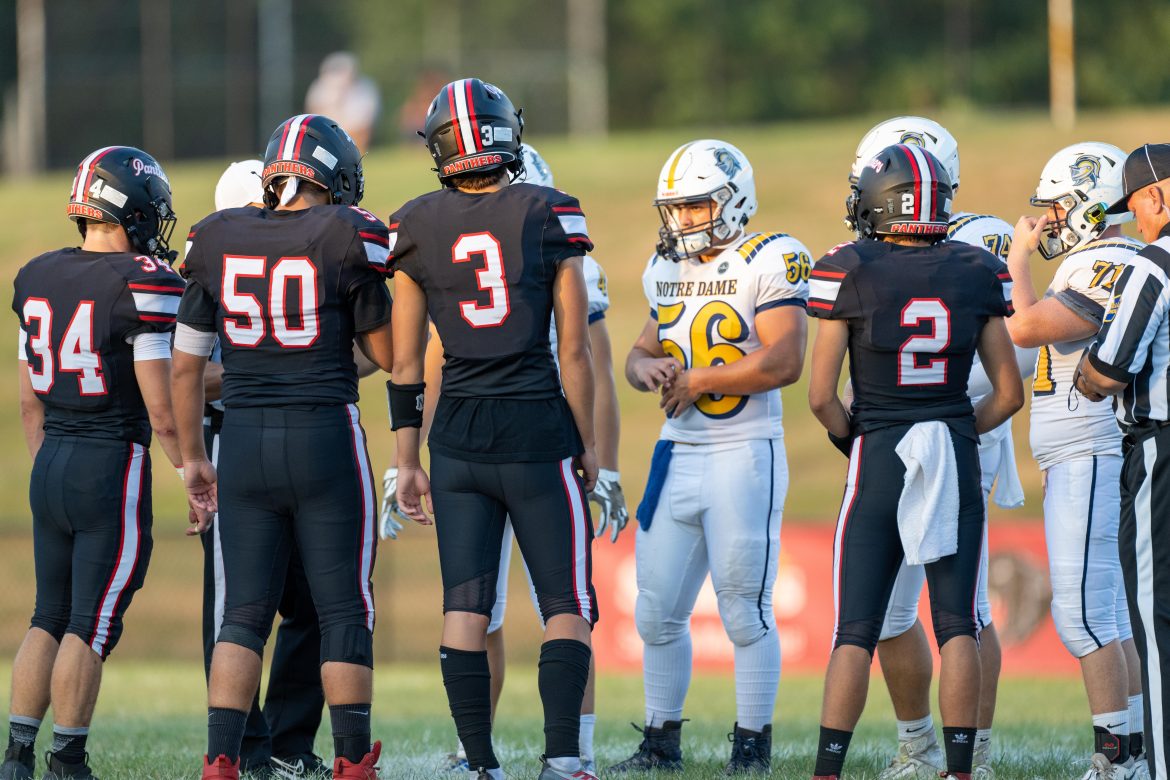 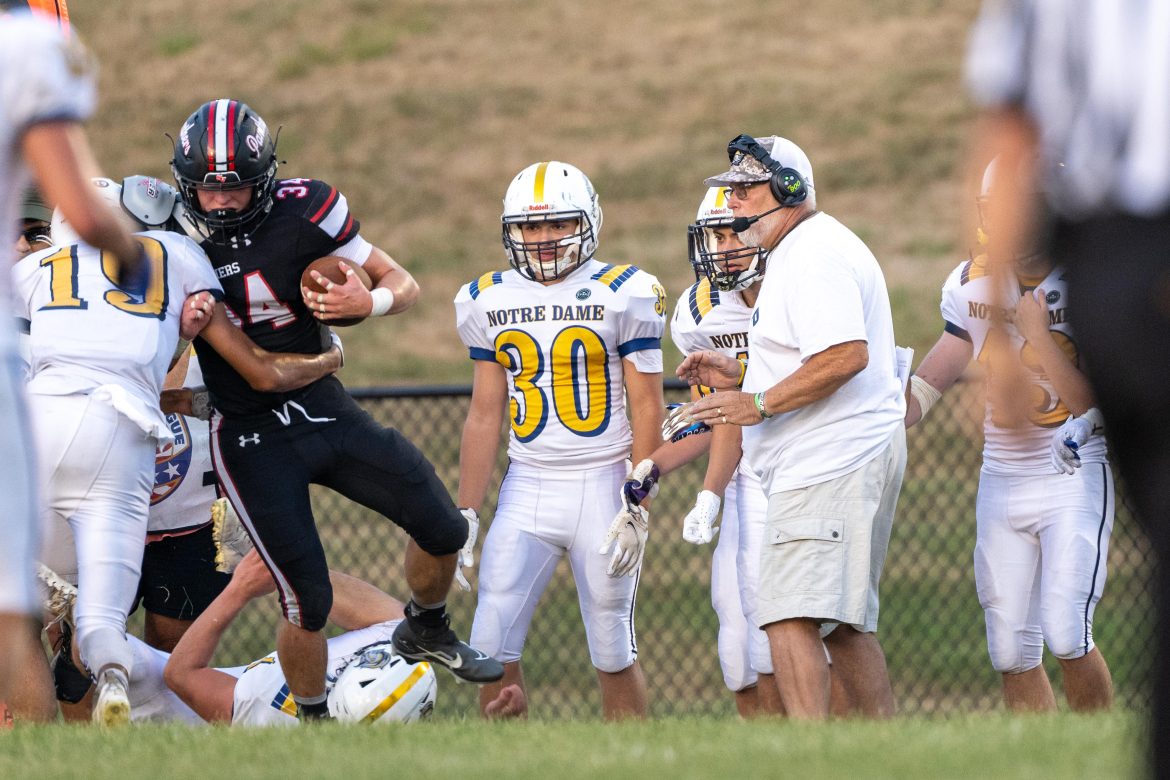 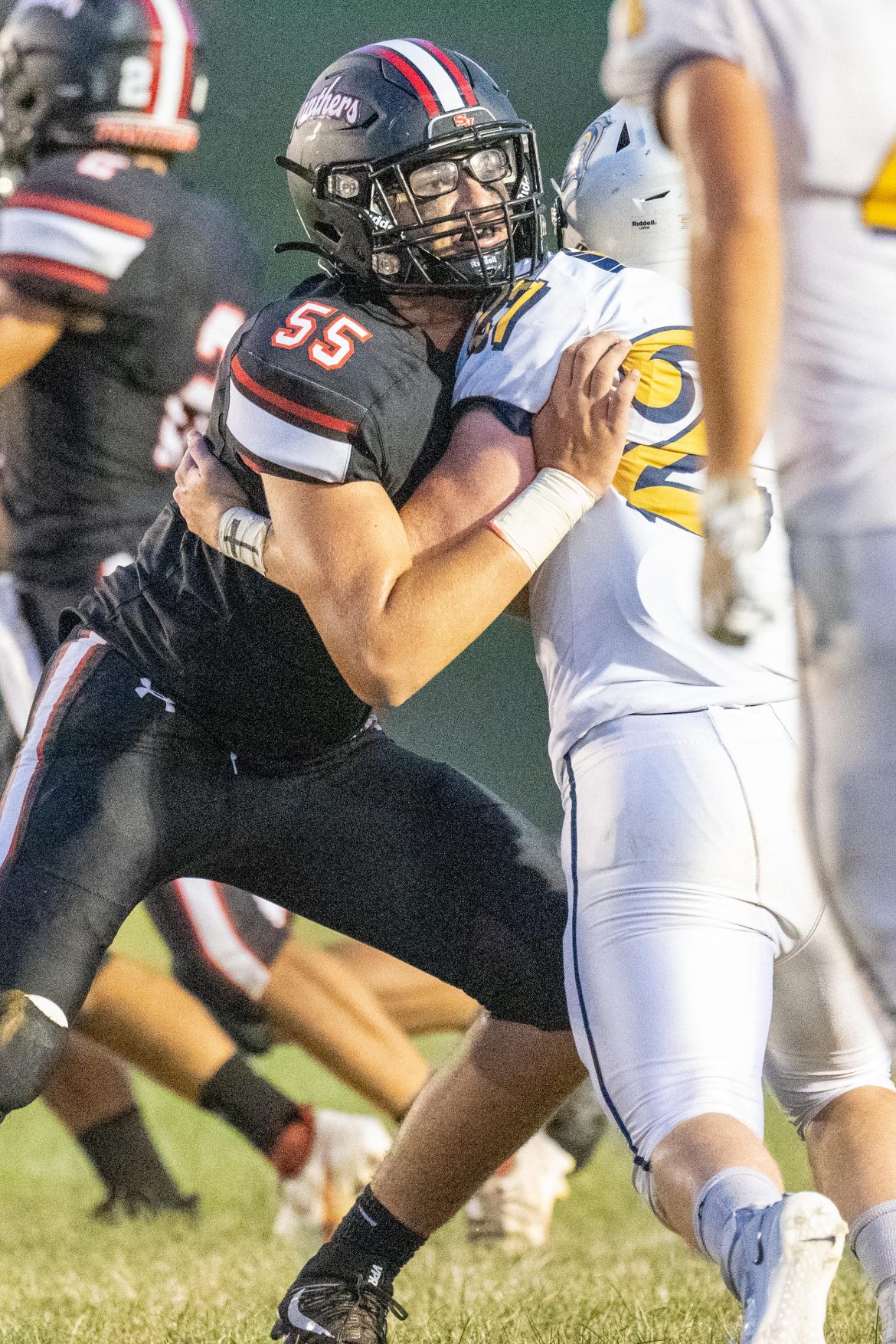 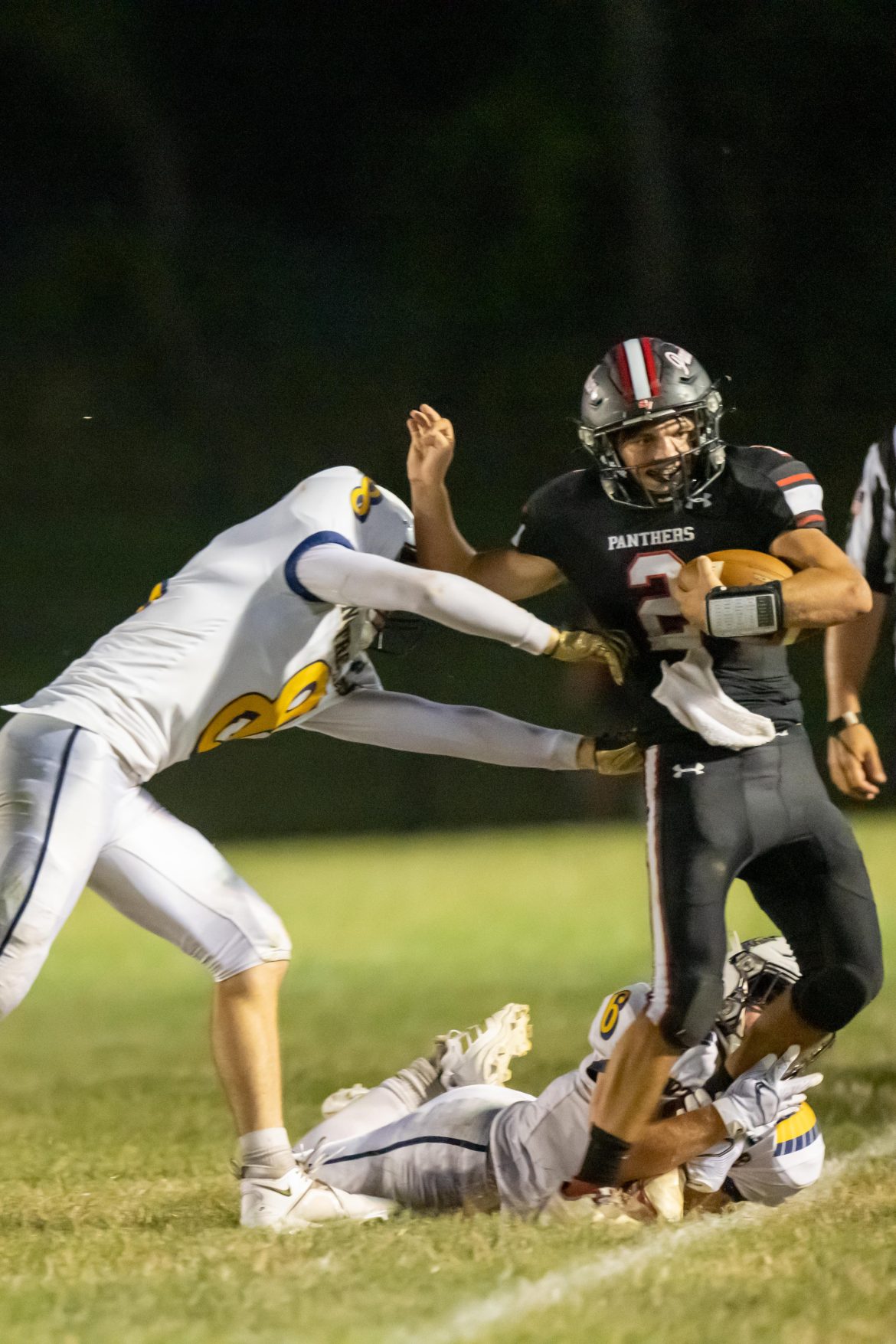 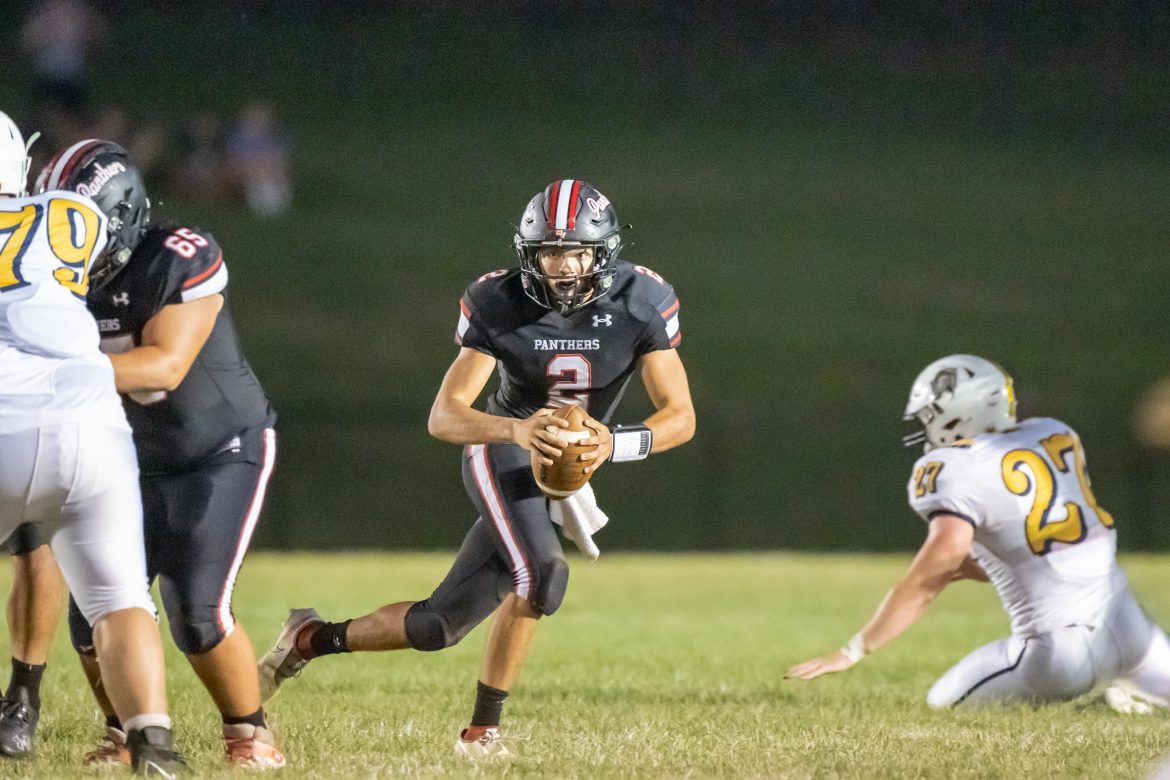 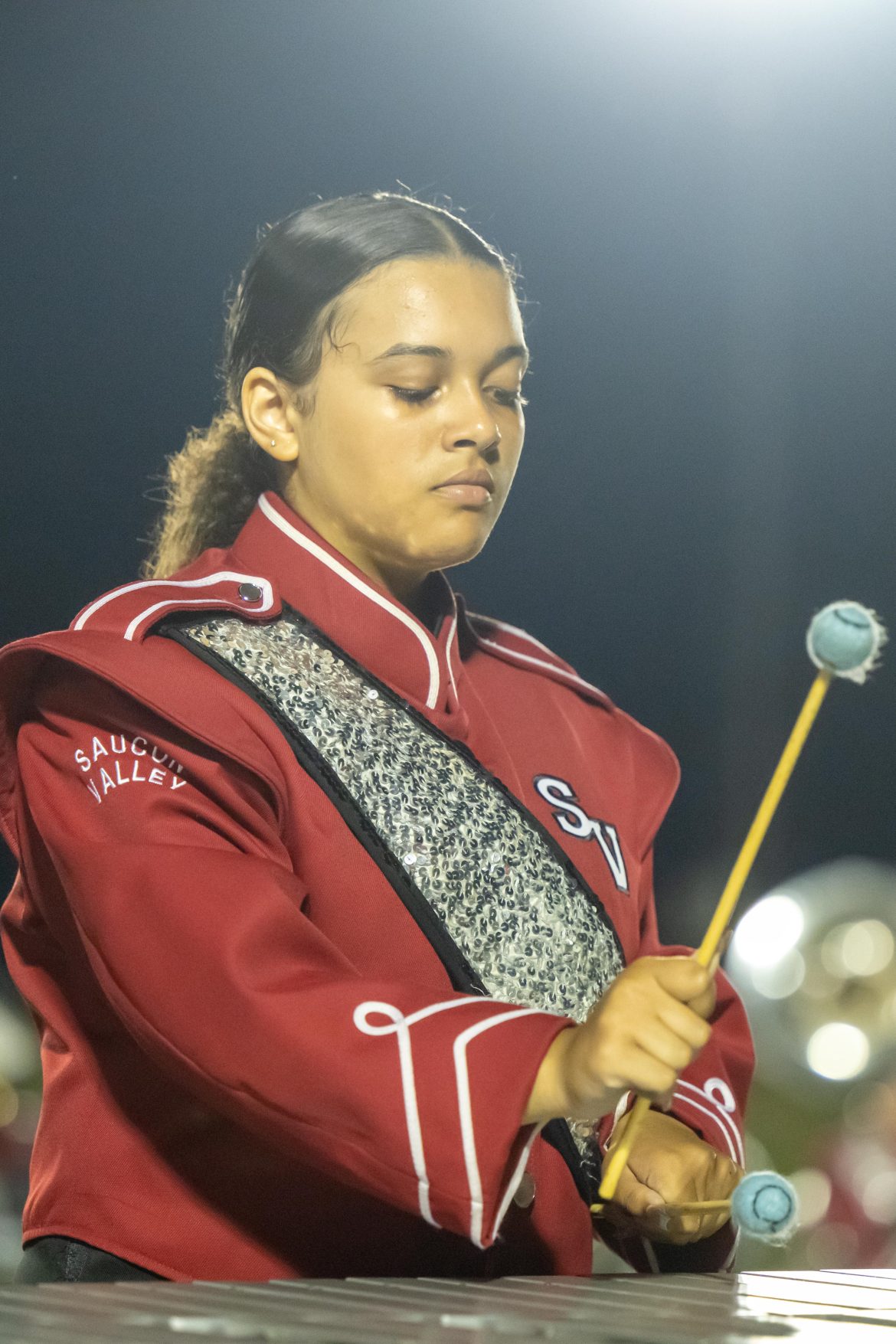 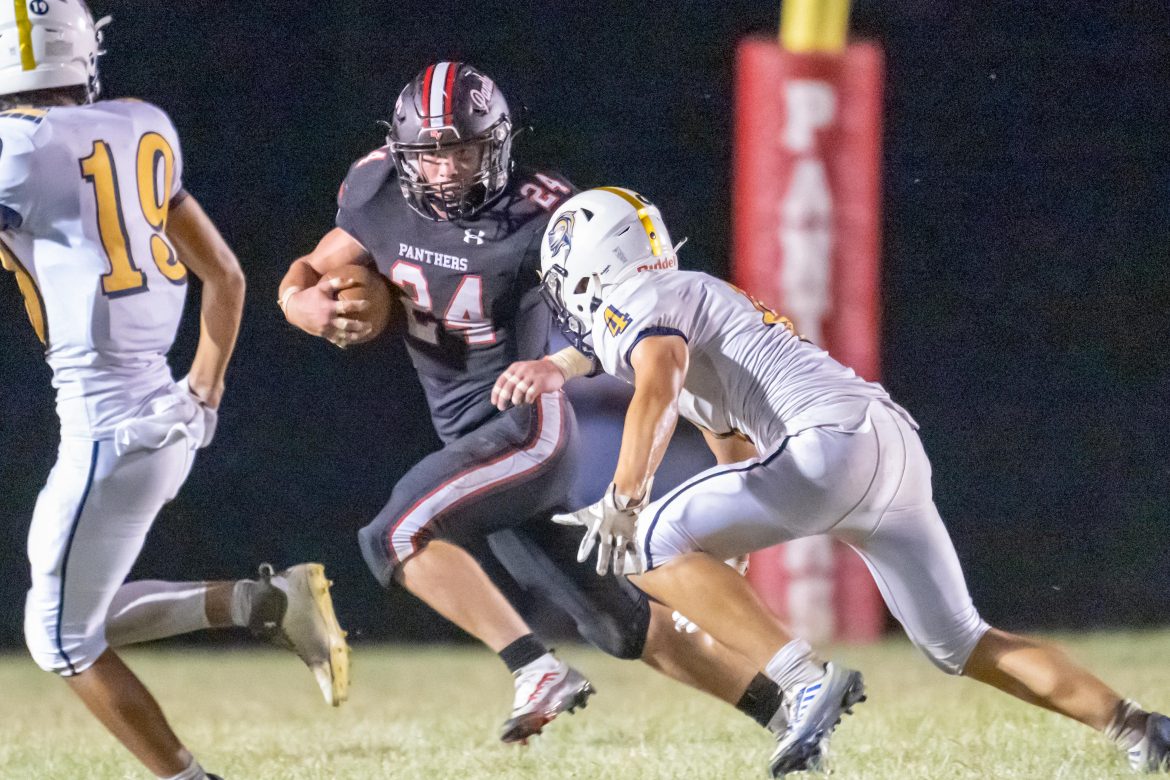 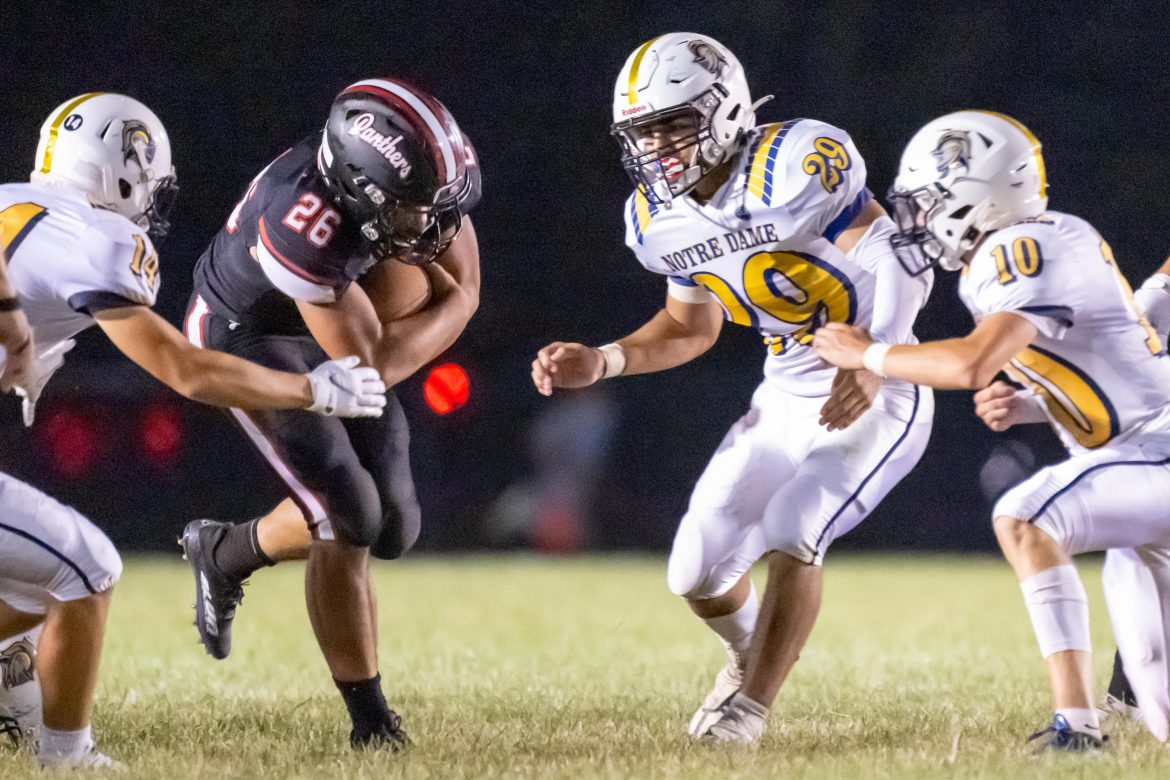 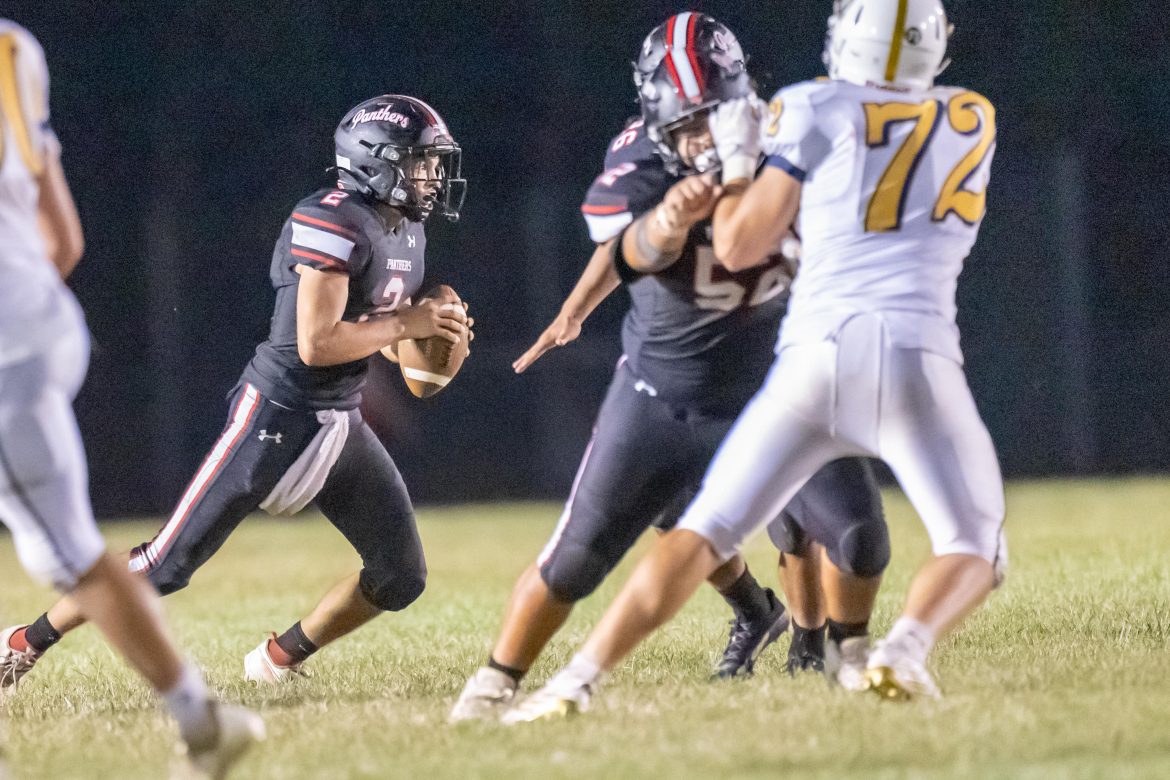 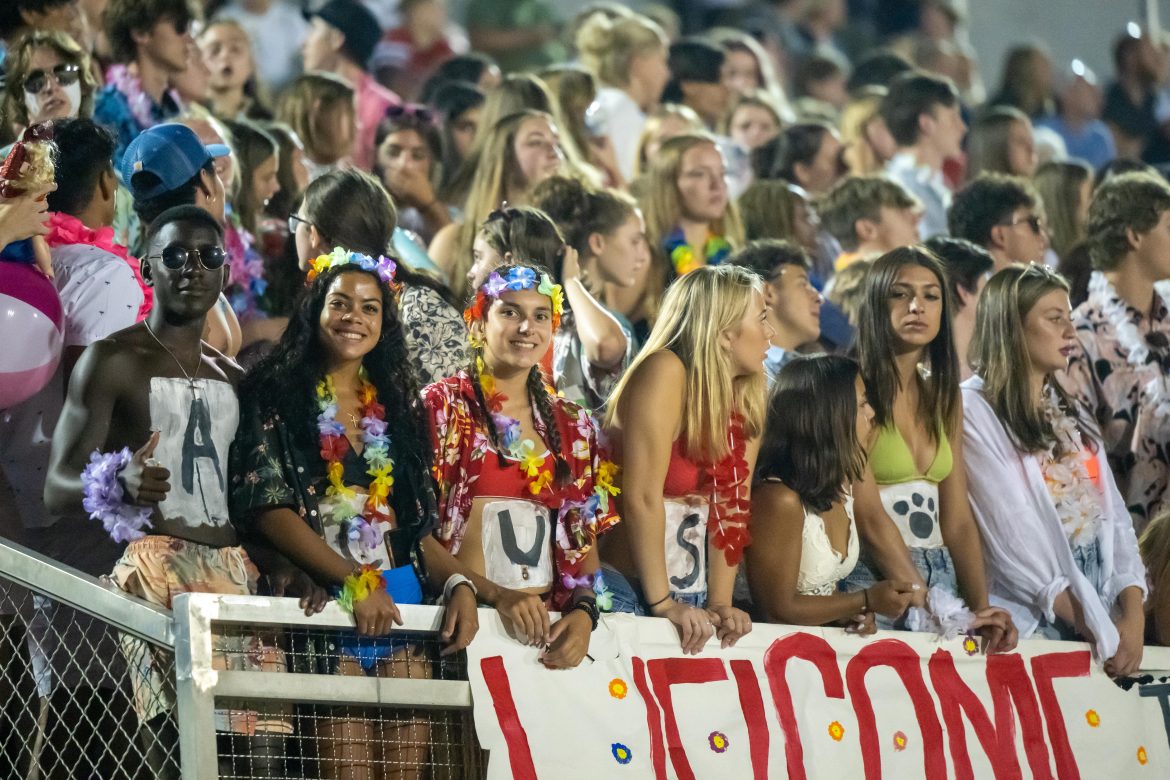