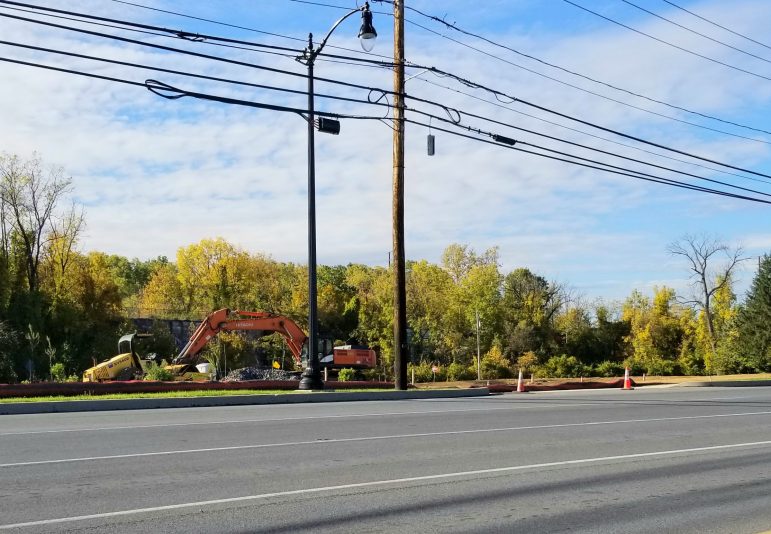 Site work has apparently begun where a new Wawa convenience store-gas station are to be built along Rt. 412 in Bethlehem. As part of that work, the former Chris’s diner building that had been a local landmark for decades has been removed from the 1.8 acre lot. The location is about half a mile north of the I-78 interchange and the Bethlehem-Hellertown border.

A long-time favorite restaurant among many Hellertown area residents, the former Chris’s diner on Rt. 412 in Bethlehem, has been removed from its site to make way for a Wawa convenience store and gas station that was approved by city planners last year.

A popular pit-stop for truck drivers and locals, Chris’s closed after a member of the family that owned it and two friends from the area won a large Powerball prize in March 2016.

The restaurant and its parking lot near the entrance to Saucon Park then sat empty for years.

In May 2021, members of the Bethlehem Planning Commission approved a plan to build a 5,585 square foot Wawa on the 1.8 acre lot. When it opens, the store is expected to have eight gas pumps underneath a canopy and an adjacent 55-space parking lot.

A condition of the Wawa’s approval by the planning commission was that the company contribute $20,000 toward the construction of a new gateway sign that will welcome visitors to Bethlehem.

Due to the nearby interchange on I-78, Rt. 412–part of which is also known as Hellertown Road in the city–is considered a major gateway for visitors, many of whom are traveling to and from the Wind Creek Casino on Bethlehem’s South Side.

Wawa has recently opened several other combination convenience store-gas stations in the Lehigh Valley, including one on Rt. 309 in Upper Saucon Township earlier this year.

It’s not clear what the company’s timeline is for opening the new Wawa in Bethlehem.

Currently the nearest Wawa to Hellertown borough is at E. Broad Street and Stefko Boulevard in Bethlehem, several miles north of where the new store will be built.