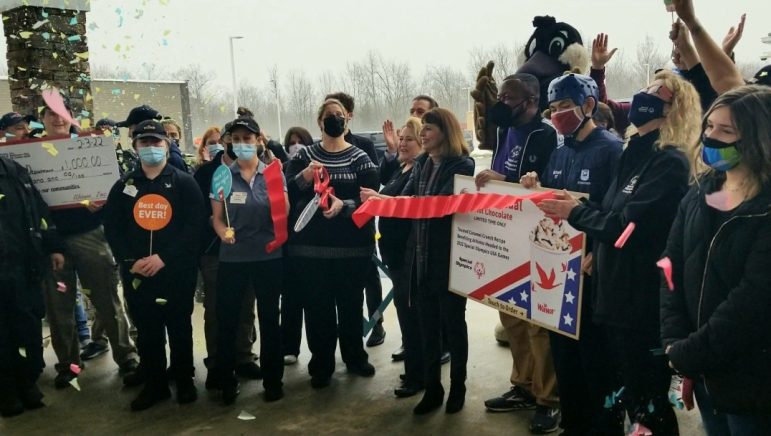 The opening of a new Wawa on Rt. 309 in Upper Saucon Township was celebrated with a ribbon-cutting ceremony Thursday morning. The grand opening ceremony that preceded it featured guest speakers, giveaways, recognition of the Upper Saucon police and fire departments with donations, a Parade of Associates and an appearance by Wawa mascot Wally Goose.

It was a grand opening literally years in the making, and the Coopersburg area was ready.

Wawa opened the doors to its new store on Rt. 309 in Upper Saucon Township Thursday at a ribbon-cutting ceremony that recognized the community in several meaningful ways.

Among the local organizations that were recognized during the 9 a.m. event were the Upper Saucon Township Police and Volunteer Fire departments, both of which received $1,000 donations and hoagies from Wawa as part of its Hoagies for Heroes program.

In accepting the donation on behalf of the police department, Sgt. Justin Driscoll said that Upper Saucon Township Police plan to put the money toward their K-9 program.

The youngest honoree at the grand opening ceremony was 12-year-old Upper Saucon resident MaKenna Boss, who was the store’s “Community Day Brightener Honoree” for her fundraising on behalf of Lehigh Valley Health Network’s Reilly Children’s Hospital.

Wawa Director of Store Operations Gina DePaolo, General Manager Megan Boehm and others spoke during the half-hour-long ceremony, which also featured a “Parade of Wawa Associates” and remarks by local elected officials, including Upper Saucon Township Board of Supervisors Chairman Brian Farrell and State Rep. Milou Mackenzie (R-131), who were on hand to help welcome Wawa to the Southern Lehigh area.

In addition to being the first Wawa to open in the Coopersburg area, the new store at Rt. 309 and Passer Road is also the first the company has opened this year. According to a company news release, Wawa plans to open more than 50 additional new stores in 2022.

Inside, the new store features a beer cooler, a seating area, self-service checkouts, a full-service checkout counter, restrooms, ATMs, a Pennsylvania Lottery kiosk, prepackaged cold foods, cold drinks, a soda fountain, a self-service coffee bar, baked goods, and various kiosks from which customers can order and customize everything from soup to salads to hoagies to burgers to hot or iced beverages to go. The extensive Wawa menus are displayed on the kiosk screens as well as on flatscreen LEDs hung inside the store.

Contributing to the fun atmosphere at the event was Wawa mascot Wally Goose, who was on hand to give away 100 “Goose Vibes Only” t-shirts to some of the first customers to visit the store, which was built on the site of the former Peppercorn Pub.

The Wawa also features a gas station, and will be adjacent to a McDonald’s that is currently under construction. The McDonald’s is expected to open next month. 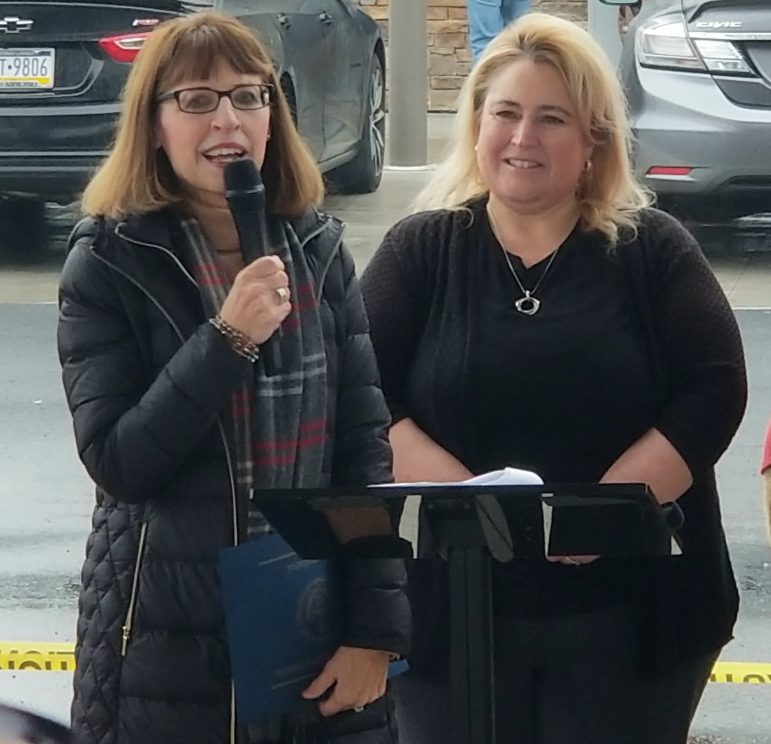 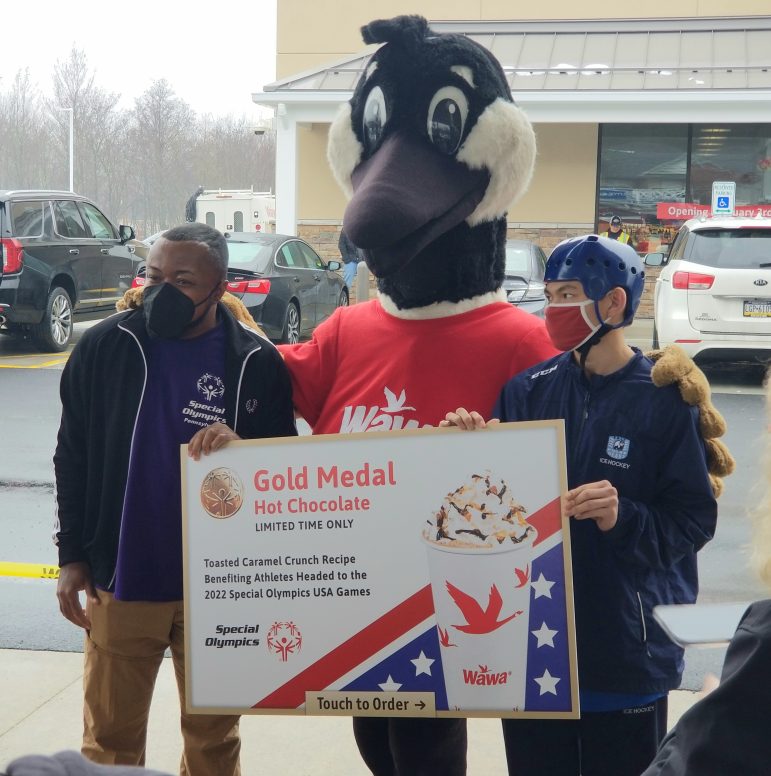 Local Special Olympians pose for a photo with Wawa mascot Wally Goose. The company announced at its Upper Saucon store opening that sales of a new hot chocolate flavor will benefit Special Olympians. 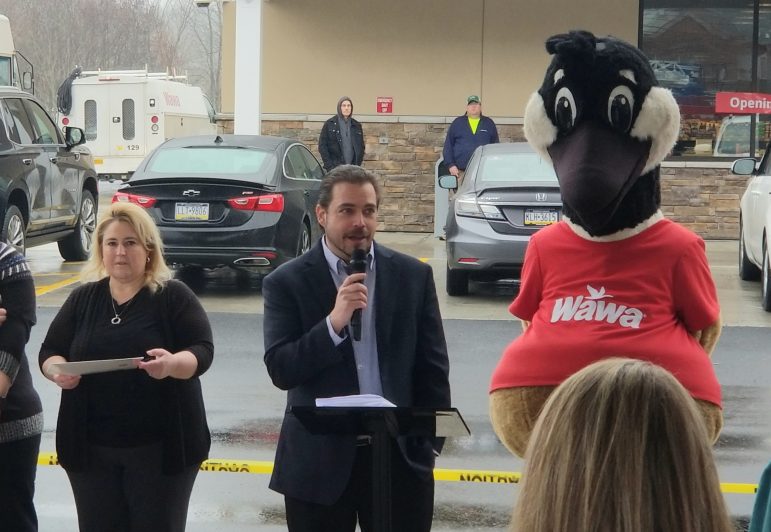 Wawa Area Manager Gerard Matthew emceed the grand opening ceremony and ribbon-cutting, which were held underneath the gas pump canopy adjacent to the new store on Rt. 309 in Upper Saucon Township. 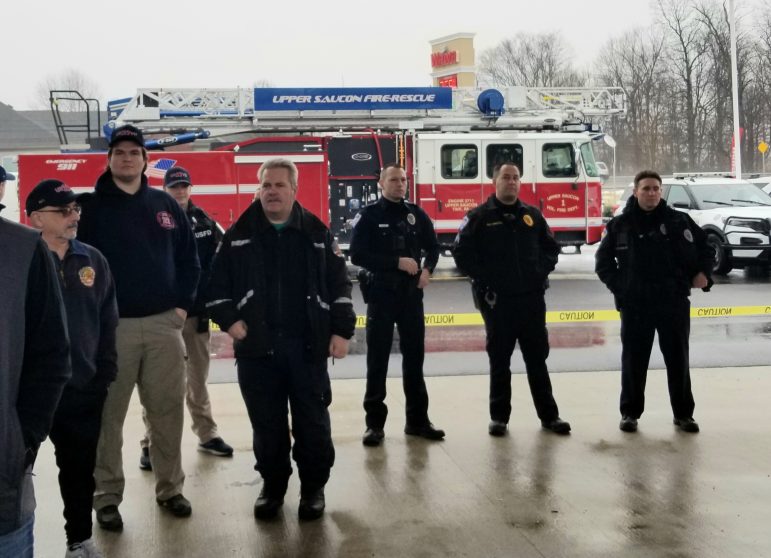 Upper Saucon Township police officers and volunteer firefighters were present for the ceremony, during which their departments each received a $1,000 donation from Wawa. The company also presented them with some of their celebrated sandwiches as part of their Hoagies for Heroes program. 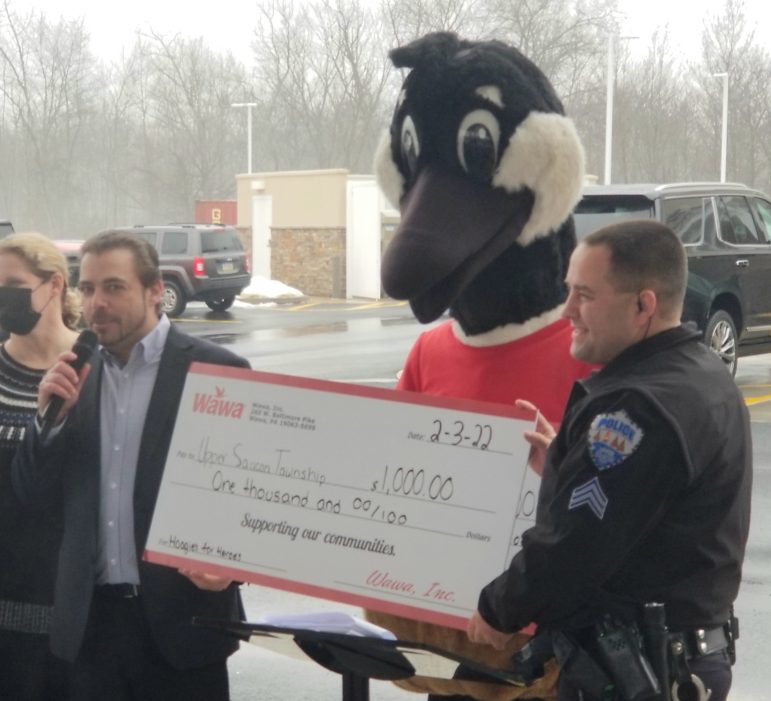 Sgt. Justin Driscoll accepts a $1,000 donation from Wawa on behalf of the Upper Saucon Township Police Department. Driscoll said the department will put the money toward its K-9 program. 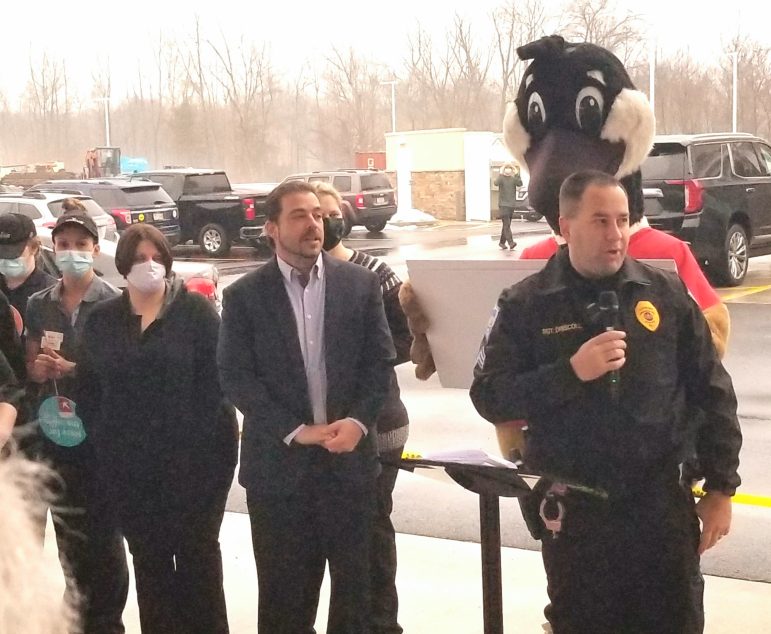 Sgt. Justin Driscoll of the Upper Saucon Township Police Department thanks Wawa for their donation to the department. 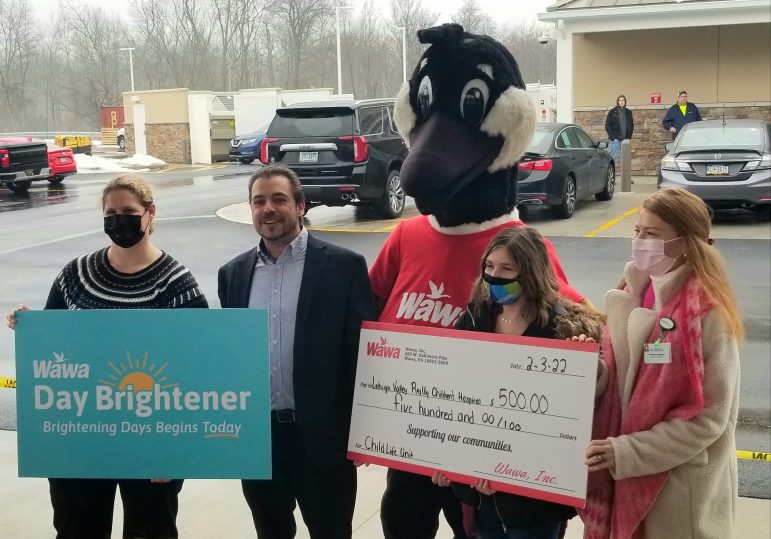 Twelve-year-old MaKenna Boss, pictured above holding a symbolic cardboard check, was honored as the Upper Saucon Township “Community Day Brightener” at the new store opening on Rt. 309 Thursday. Boss is a committed fundraiser for Lehigh Valley Health Network Reilly Children’s Hospital, and was nominated by other community members for the recognition. Thanks to her generous spirit, the hospital received a $500 donation from Wawa. 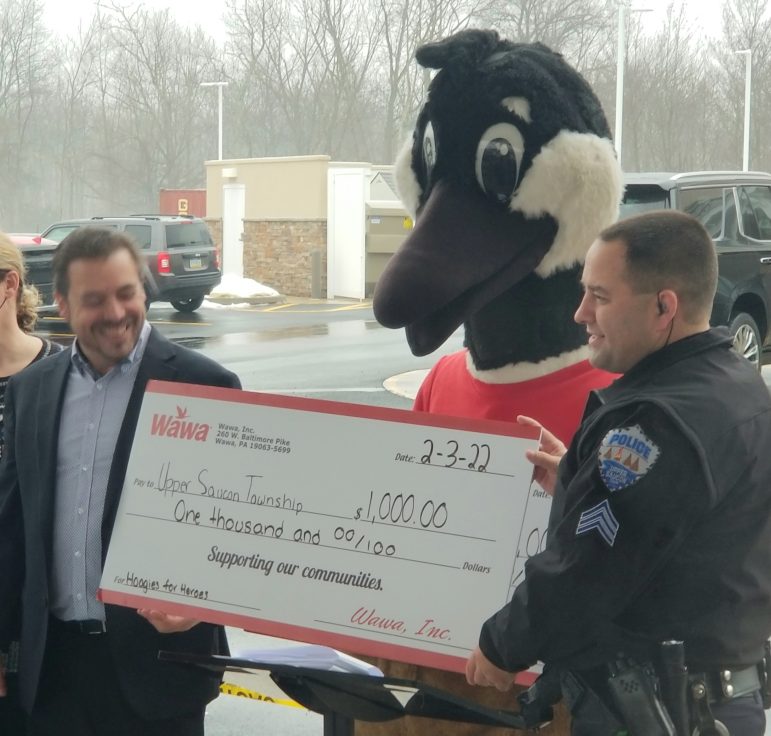 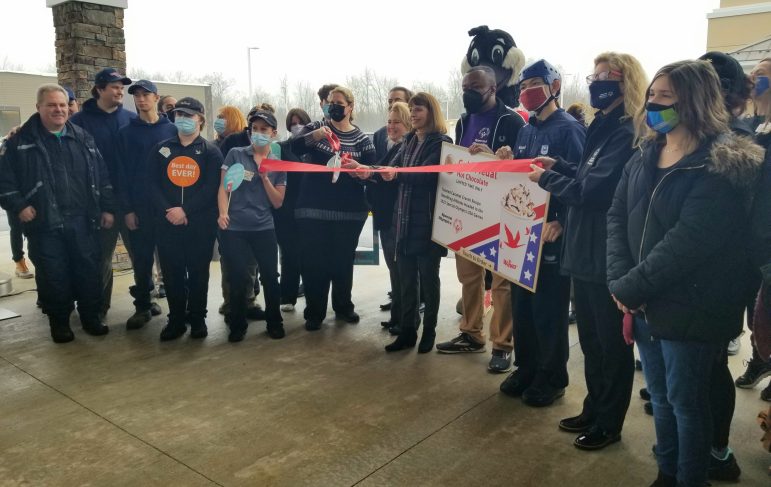 Store associates, Wawa company representatives, local elected officials, Special Olympians, police and fire company officials, and others pose for a photo just before a ribbon was symbolically snipped to mark the opening of the new Wawa on Rt. 309. 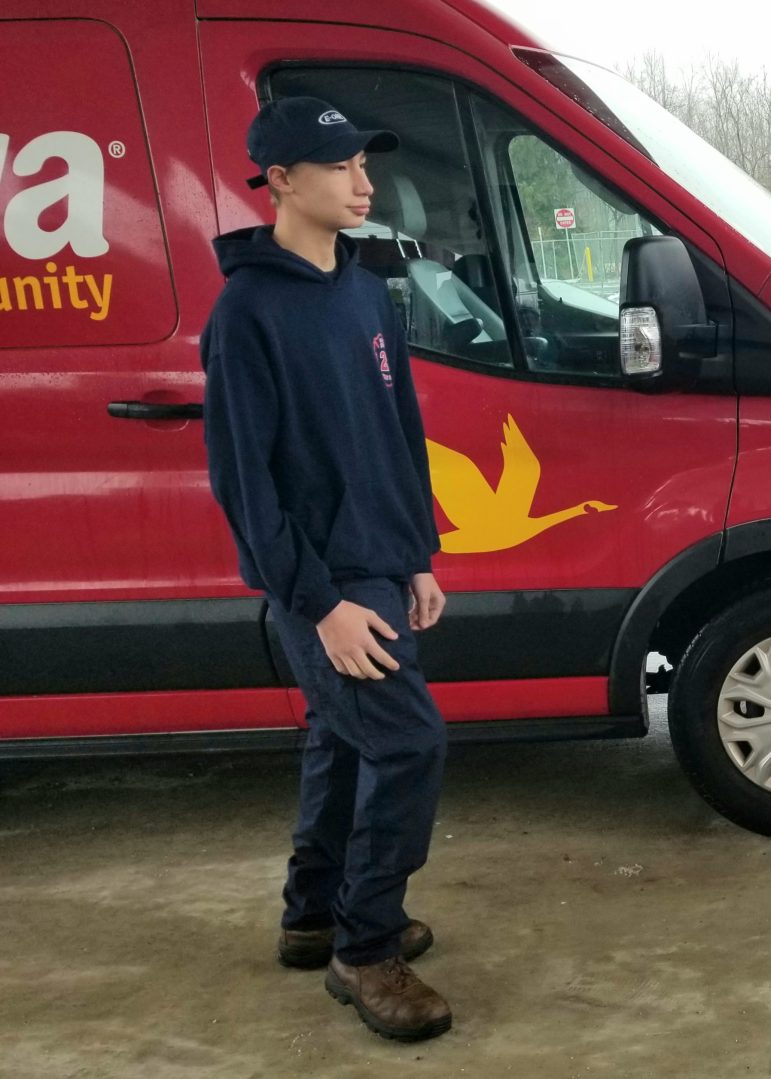 Recently-hired Upper Saucon Wawa employees were recognized during a “Parade of Associates” at the grand opening event. 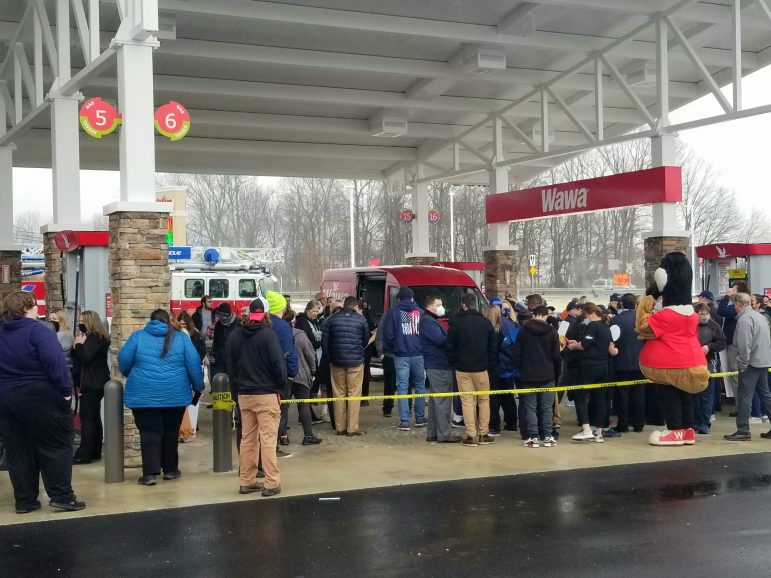 The ceremony was attended by nearly 100 guests, including representatives for various local media outlets who were eager to cover the long-awaited opening of the Southern Lehigh area’s first Wawa. Although light rain put a bit of a damper on things, temperatures were very mild for this time of year, which meant that it was not uncomfortable to stand outside for the event. 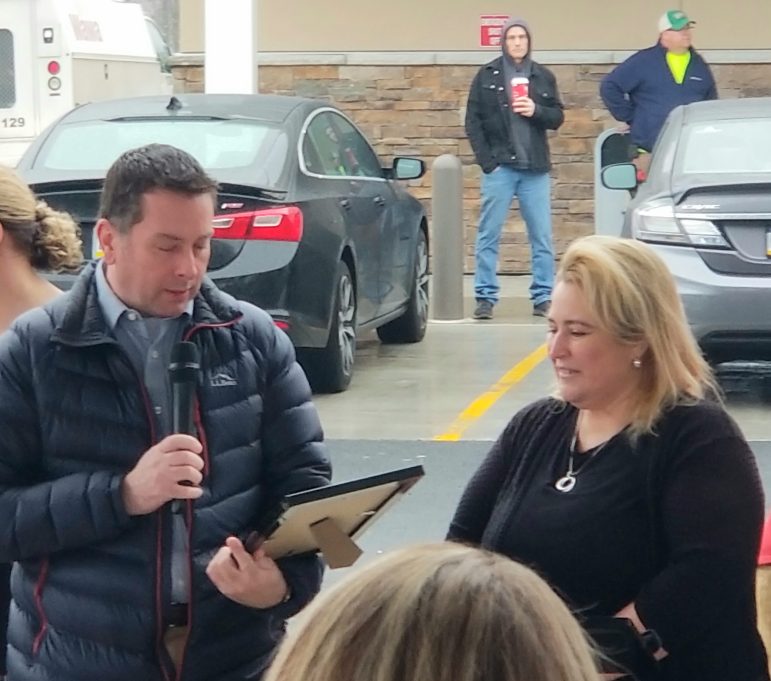 Upper Saucon Township Board of Supervisors Chairman Brian Farrell reads a certificate of recognition he presented to Wawa company officials Thursday during a grand opening held at the new store on Rt. 309. 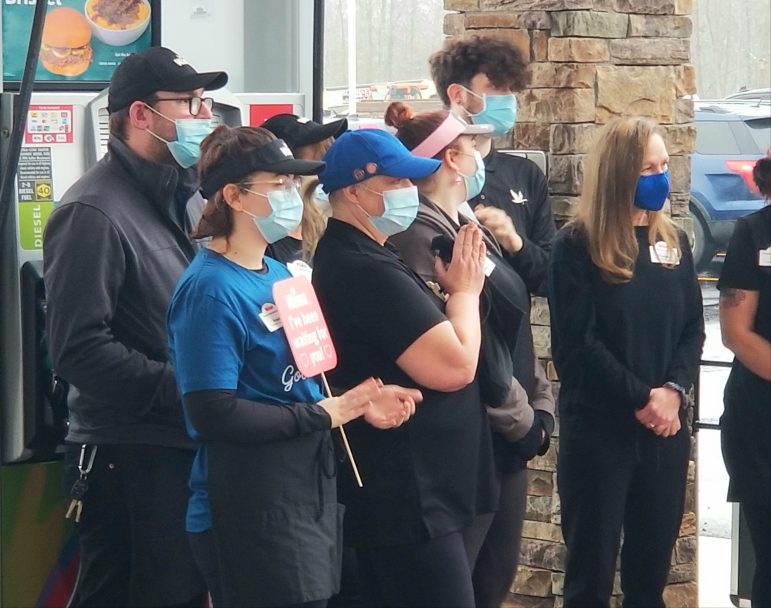 The Upper Saucon Township Wawa’s new associates were recognized during the grand opening event and ribbon-cutting. 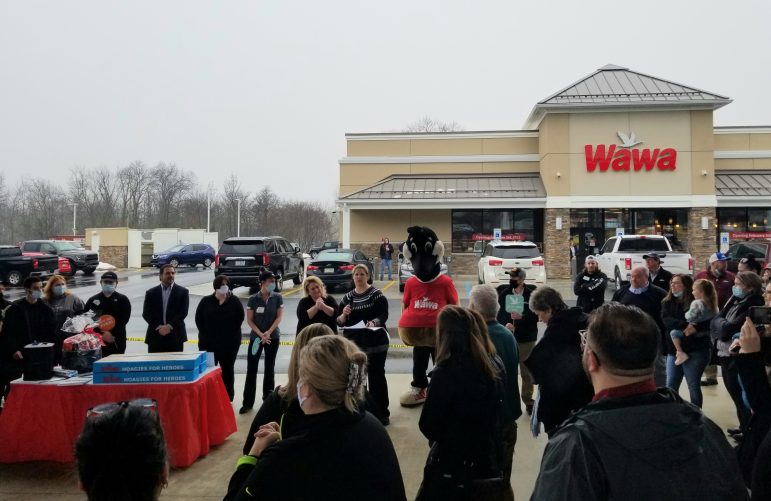 After nearly four years of planning and development, the new Wawa at Rt. 309 and Passer Road in Upper Saucon Township officially opened for business on Thursday. 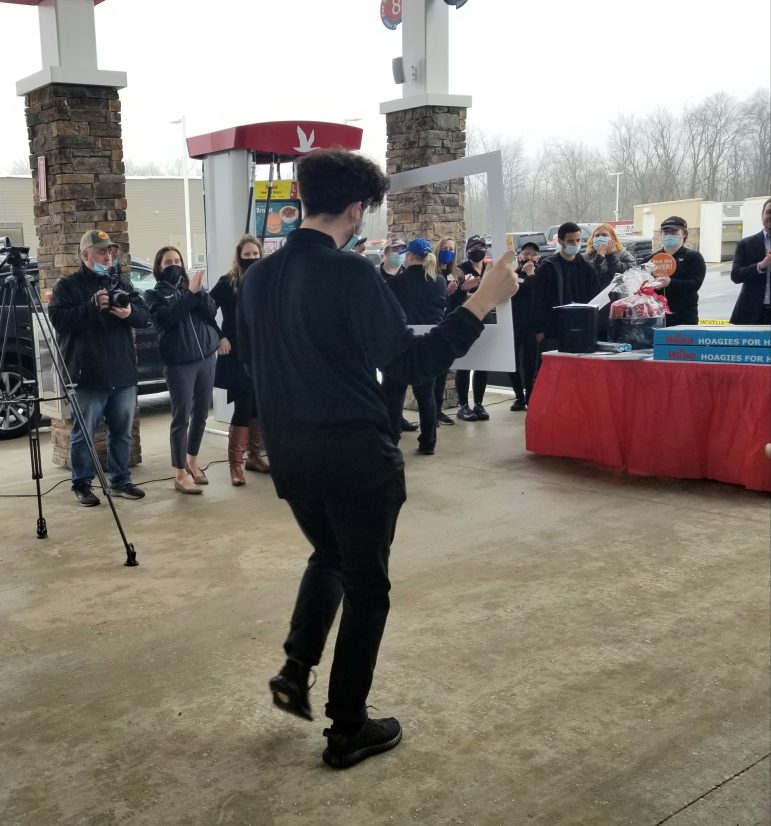 Wawa recognized individual employees with a “Parade of Associates” that was held during the grand opening event. 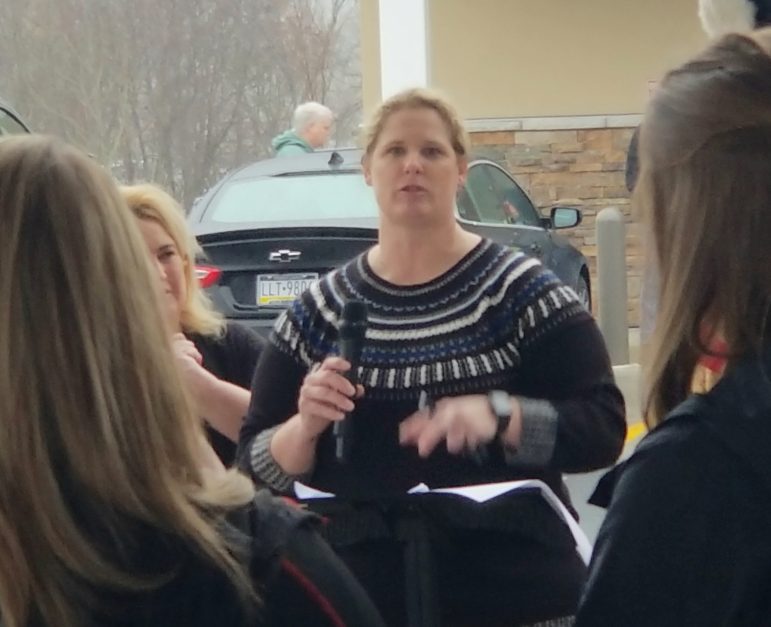 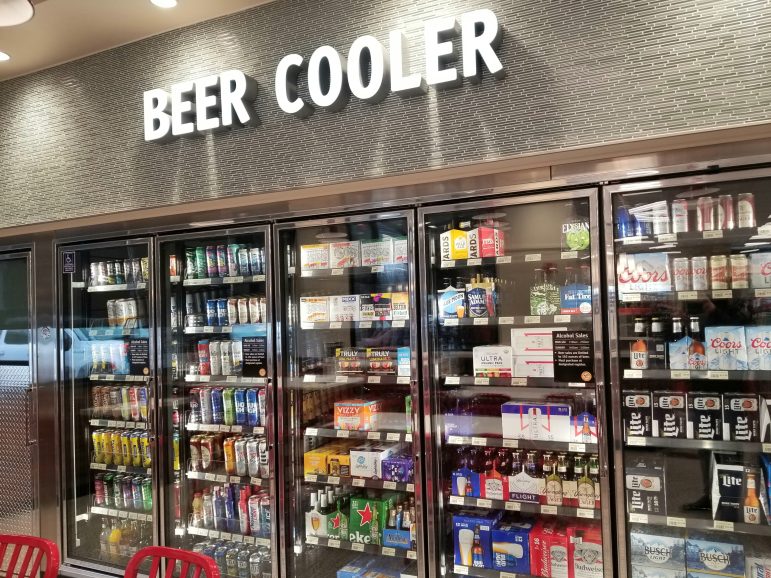 The new Wawa is one of the first in the area to feature a beer cooler, which was well-stocked for Thursday’s grand opening. 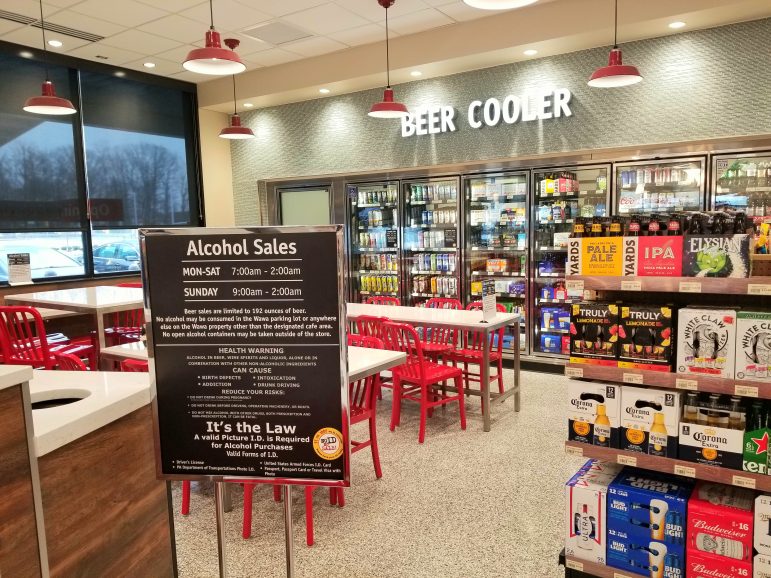 Signs advertise the hours during which beer will be sold at the Wawa. 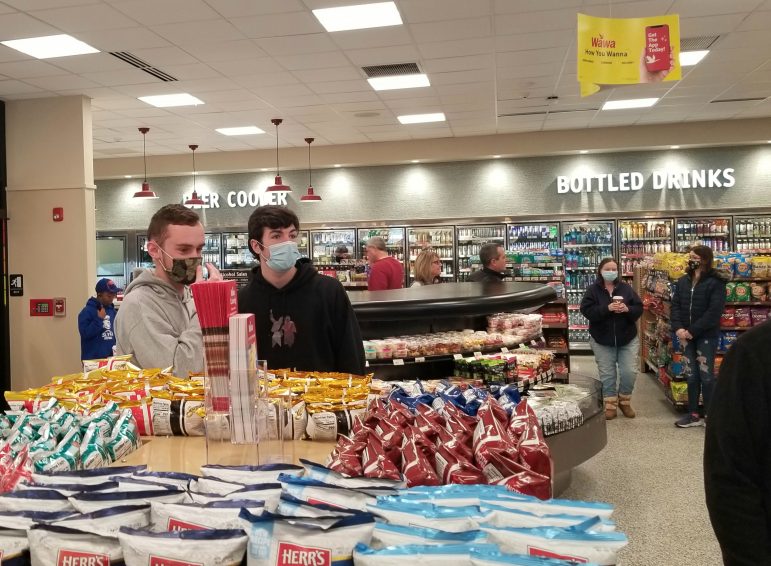 Curious customers take in the sights at the new Wawa on Rt. 309 in Upper Saucon Township. 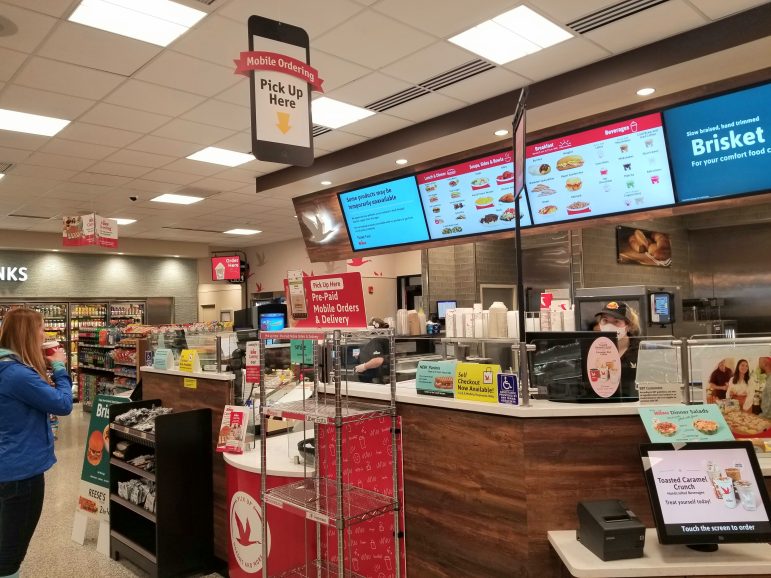 LED screens highlight the store’s various menus behind the counter where sandwiches and other foods are prepared. 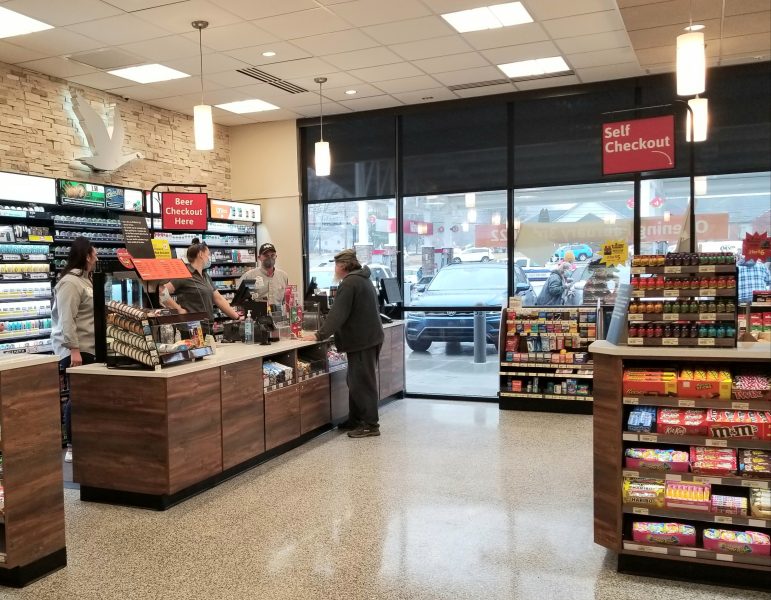 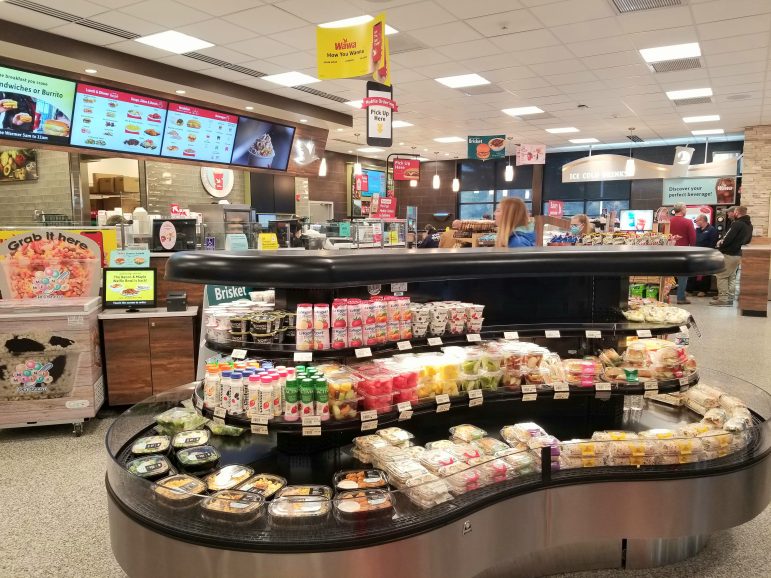 The coolers in the new store were stocked with all kinds of portable foods and beverages for Thursday’s grand opening. 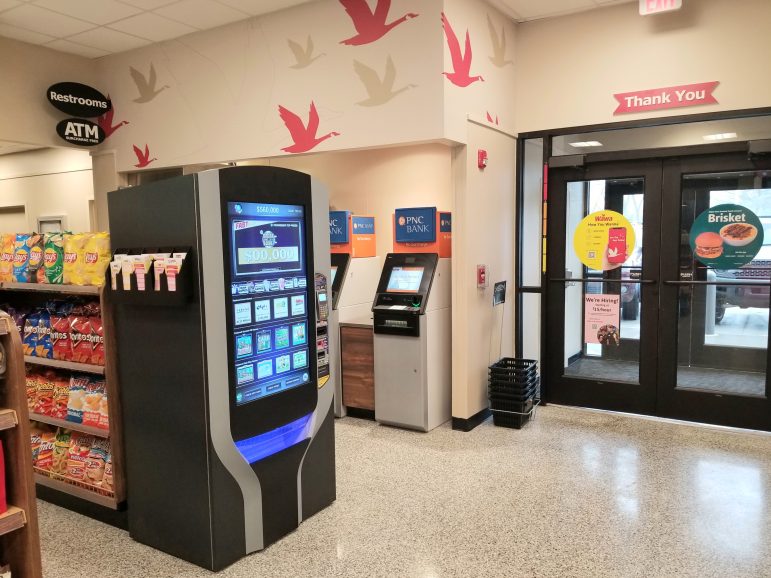 A Pennsylvania Lottery kiosk and ATMs are located near the rear entrance to the store. 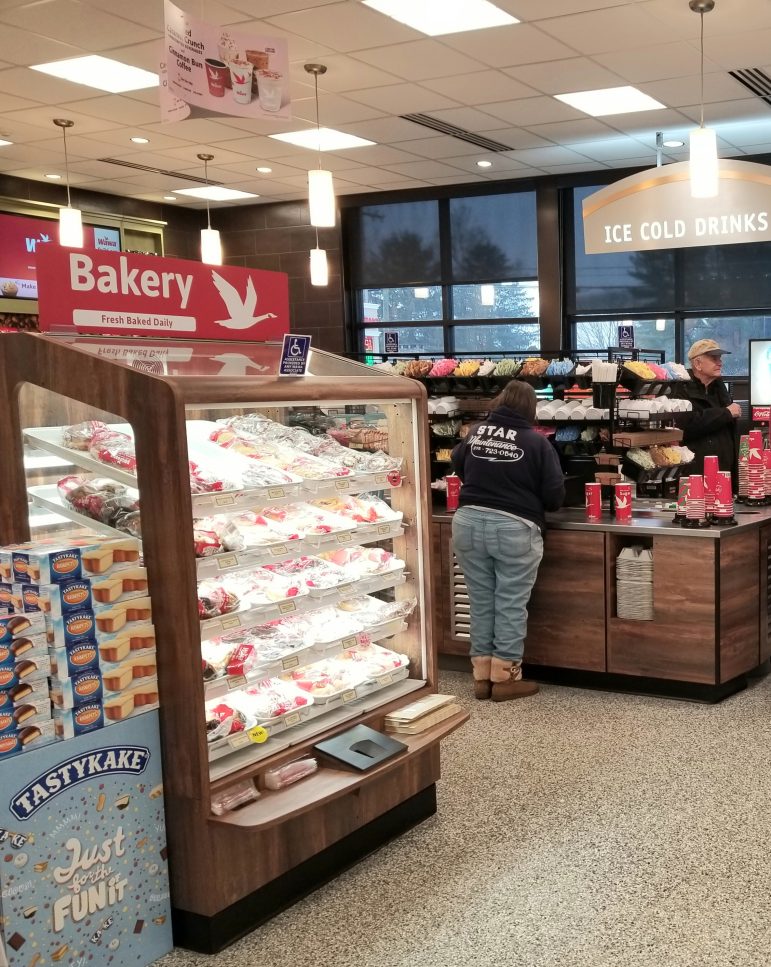 Wawa is known for its fresh baked goods and coffee, among other things. 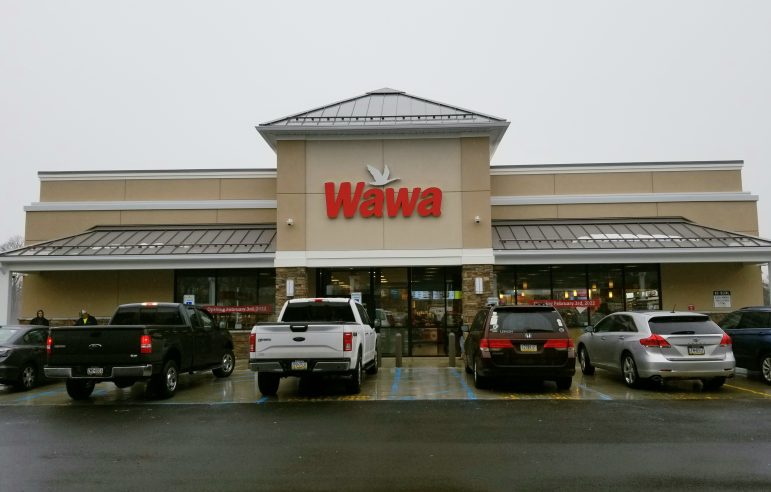 Parking spaces were at a premium Thursday, as Coopersburg area residents stopped to check out the new Wawa on Rt. 309.