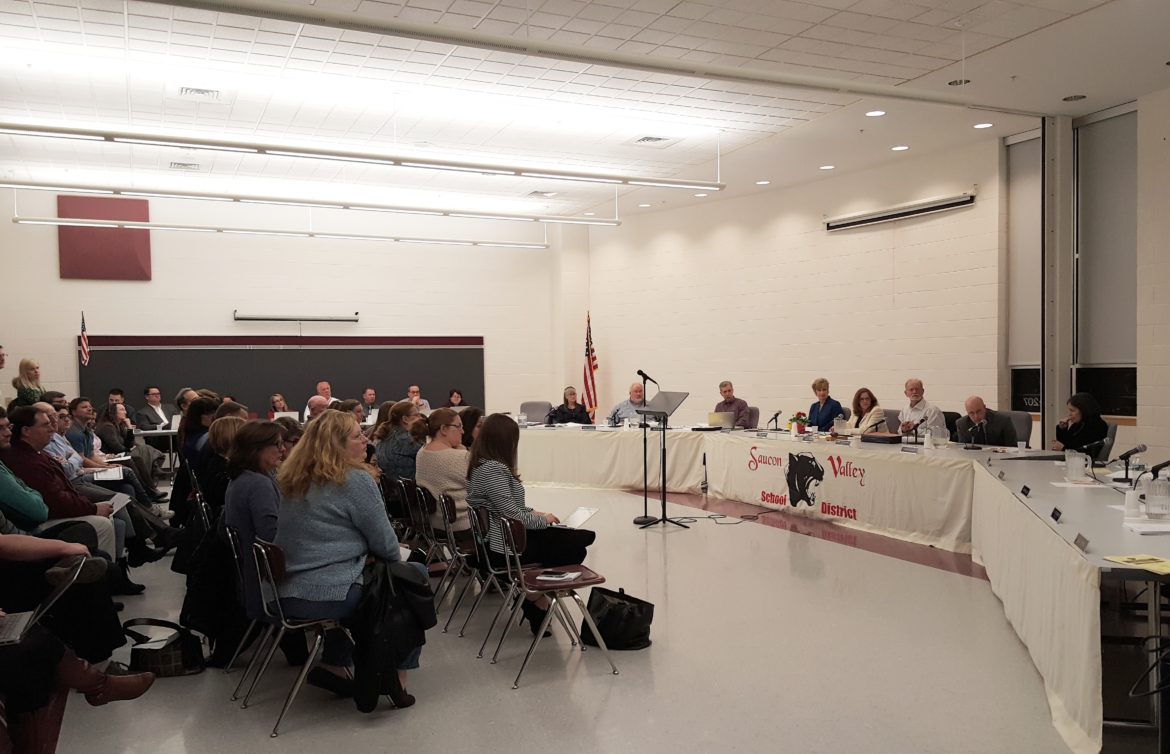 There wasn't an empty seat at Tuesday night's Saucon Valley School Board meeting, with some attendees sitting on overturned tables at the back of the Audion room. 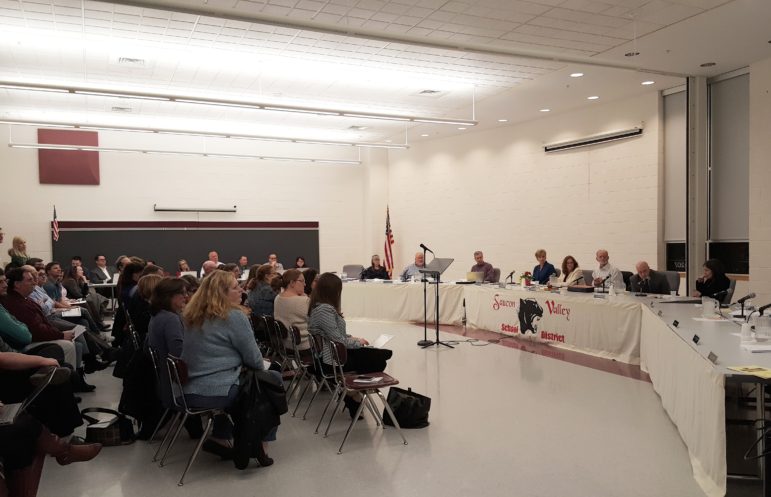 There wasn’t an empty seat–in the audience seating area–at Tuesday night’s packed Saucon Valley School Board meeting, with some attendees sitting on overturned tables at the back of the Audion room.

A proposed gender studies course–an elective that will be offered to Saucon Valley High School students next year–was approved by the Saucon Valley School Board by a 5-3 vote Tuesday as part of a new program of studies, but not before one school board member made statements that left some parents and meeting attendees visibly upset, shaking their heads and exiting the meeting before it had ended.

The class will focus on constructions and representations of gender and sex and how they have evolved over time, among other themes.

Controversy over the class to be taught by social studies teacher Amy Kozel erupted at the Feb. 28 school board meeting, when several board members objected to it based on their belief that it will either promote liberal activism or not prepare students for real-world careers.

School board member John Dowling, who was one of the objectors, was absent from Tuesday’s board meeting.

At the prior meeting he said of the gender studies course, sarcastically, “I’ll express somewhat of an opinion: That’ll prepare people for a good job,” to which Kozel responded that she took offense. He then followed his remark with the statement: “I’m sorry that you do, and do you know how much sleep I’ll lose over your offense?” Many parents and observers later said they were upset by those words.

The discourse involving audience members and the present board members who object to the gender studies course–Bryan Eichfeld, Linda Leewright and Ed Inghrim–didn’t improve much on Tuesday, with Eichfeld leading the charge to eliminate it from next year’s program of studies in lieu of further evaluation of Kozel’s materials and plans.

“My concern is this course could be a course that promotes a study of victimization and how to be an activist to promote this victimization,” he said, after asking Kozel whether she belongs to a particular women’s organization he said could be working with Black Lives Matter. That question caused parent Julie Vautrin to shout out from her seat, “I’m sorry, but it’s not your business!”

“She shouted out,” commented board president Michael Karabin, before the discussion resumed.

Eichfeld, a Tea Party member, said that if the class covers women’s health topics he is concerned it will address abortion, because that is the health concern he most frequently hears discussed by women’s advocacy groups.

A number of women in the audience murmered and shook their heads, and at that point one female audience member quickly exited the Audion room.

“I don’t want our social studies department promoting victimization and liberal causes by promoting activism,” Eichfeld stressed. “Would it be appropriate to teach activism by the Tea Party? Most of the folks that would say that would say, ‘no.’ And I would tend to agree, even though I believe in those things.”

Kozel, who had already spoken to the board once at that point, said “I think you’re not seeing the value of this for our students.”

Those remarks were met with applause.

Students in Kozel’s government classes are empowered to take an active role in their society and culture by being proud and comfortable with who they area, Kozel noted.

Whether we as individuals agree with changes happening in our culture or not, “we still have to acknowledge them, whether we agree with them or not,” she added.

An invited meeting attendee from Allentown, Shawn Knipper, who is a Pennsylvania State Organizer and Co-Chair for the Woman’s March on Washington, also defended the class with strident remarks she made to the board.

The goal of the class is not to create activists, but empowerment: “to be an equal, powerful person,” she said.

“I feel that what was talked about here is really what we’re talking about in our country,” she said. “We (women and minorities) are considered second class citizens…”

“I noticed there’s someone who decided not to show up today,” Knipper added, as he glanced sideways at Dowling’s empty seat.

The bru-ha-ha over the gender studies course overshadowed an important announcement involving the future of Saucon Valley School District that was delivered at the meeting.

Superintendent Monica McHale-Small confirmed that she will leave the district by August.

She said her departure is a retirement, not a resignation, and that she reached her “difficult” decision after months of contemplation.

McHale-Small’s contract was renewed for three years in October of last year.

Her decision comes in the midst of a school board primary election campaign in which eight people–including Miller and Dowling–are running for four seats.

McHale-Small said a motivating factor for her was the need to spend more time with her family–including an infant grandson. And she added that she plans to remain actively involved in the education arena, although what form her involvement will take “remains to be seen.”

The board voted unanimously to approve McHale-Small’s retirement, which will begin sometime between the end of June and mid-August.

The board also set graduation for Friday, June 9, 2017 at the high school.

The next Saucon Valley School Board meeting will be held Tuesday, March 28 at 7 p.m. in the Audion room.