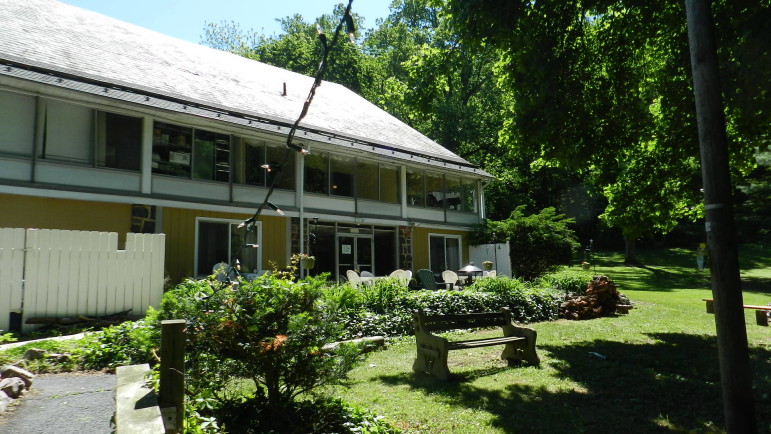 The Beethoven Waldheim Club, 1984 Waldheim Road, Lower Saucon Township, was a private social club and banquet facility that for many years hosted special events, including weddings and picnics. (FILE PHOTO)

A landmark local social club and banquet facility with a storied history has closed its doors, reportedly due to financial woes.

The Beethoven Waldheim Club, which occupies a wooded hillside property on Waldheim Road south of Hellertown, closed at midnight, Sunday, April 30, according to Facebook posts by members and club directors.

Many area residents expressed sadness about the shuttering of what they regarded as a beloved local institution, where hundreds of weddings, picnics and other milestone events were held over the decades.

The following history of the organization and explanation for the closing was publicly posted by the club on Facebook on April 23 (Link: https://www.facebook.com/BeethovenWaldheim?fref=nf&pnref=story):

In 1887 the Beethoven Maennerchor was founded as a conservatory for German Folk music in Bethlehem, Pennsylvania. Since our founding year, musical masterpieces have been consistently recorded and meticulously performed. During 1933 our current location was acquired, and our club was renamed the Beethoven Waldheim, meaning “Beethoven’s Wooded Home.” Our liquor license was then purchased and placed into service, and alcohol was first served in the form of refreshing libations in the farm house that still stands on our current site. While the club’s musical endeavors continued, enhancements such as the pond, which is located on our back property, was formed by a dam and provided a swimming and picnic area for our members’ families. The changing room, located where our now bar dining room is, was the only practical utilization of the barn which was built in the late 1700s.

In 1961 renovations of the barn began and the current bar room and kitchen area was completed in 1962. This included an upstairs ball room that was only accessible from the outside.

In 1972 an addition was completed that included the current upstairs and downstairs restrooms, back rooms and stairs leading to the ball room from the lower floor bar area.

Since then countless marital bonds have been formed, resulting in new families, friendships forged and good will spread in the name of Christianity and humanity, our walls standing in silent testimony to the best our membership has had to offer to those in need while proudly professing our heritage and mission to the surrounding community and beyond.

We flourished, adding a picnic grove, playground and pavilion in the early 1980s, and we have remained a beacon of morality and family values to this very day.

However as time progressed, and the cost of operations increased, combined with local development of the surrounding town, it has steadily become increasingly difficult to maintain the level of profitable revenue required to meet the expenses that so crucially preserved our financial health.

Last year, our operations were temporarily suspended by the LCB (Pennsylvania Liquor Control Board) as a result of an anonymous telephone call. This unfortunate situation disrupted a delicate balance we have not been able to recover from. Since then, sales have continued to taper off, membership and member participation has continued to dwindle as costs of operations increased, (and) combined with thousands of dollars in lost rental income has relentlessly plagued us. Despite our intense efforts to counteract this trend, it has continued to worsen to the point where we are no longer able to financially sustain ourselves.

It is with our deepest regret that we have been forced to inform our membership that over 183 years of service to our community and heritage has been forced to come to a solemn end. As of end of business, April 30, 2017, the Beethoven Waldheim will succumb to the immense weight of its financial burdens and will be closing its doors.

We thank all of our dedicated members and staff who selflessly donated their time, professional services and patronage on a regular basis for so faithfully supporting us. Your faces, laughter and presence will be forever part of the memory that made up the very foundation of our club.