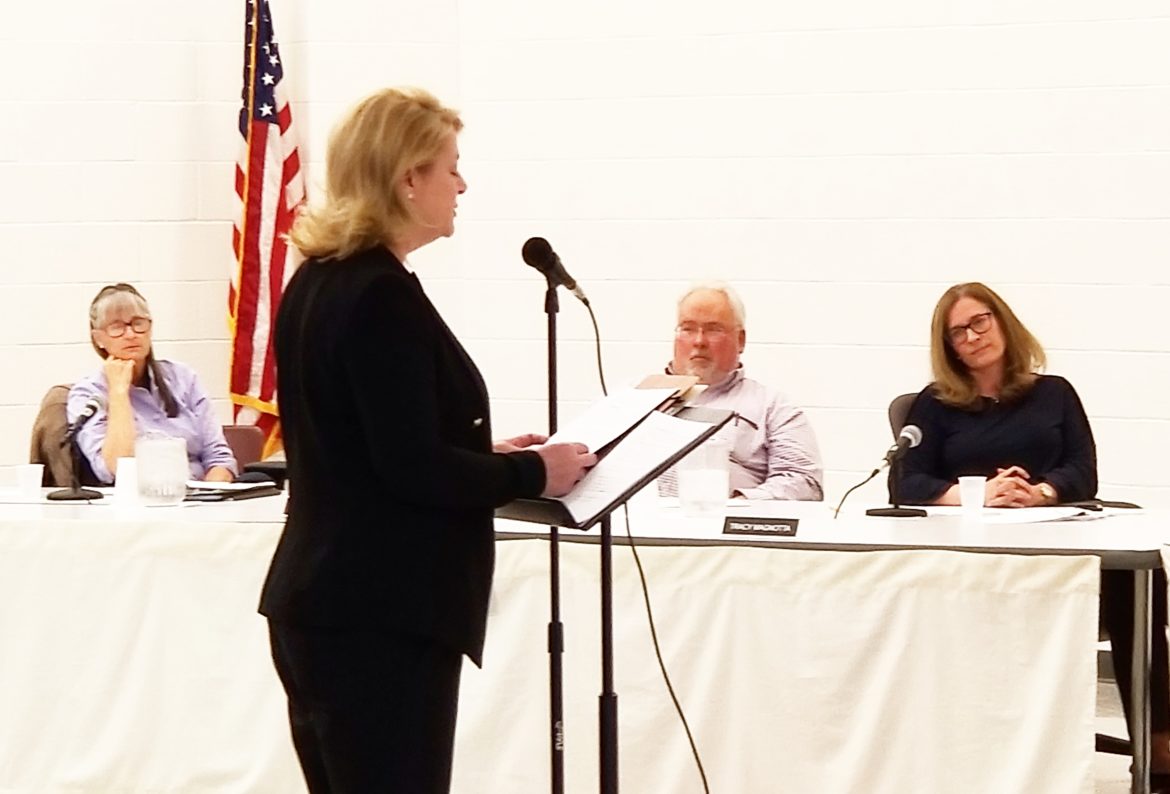 Saucon Valley parent Jennifer Altemose was outspoken in her criticism of the school board following high school principal Beth Guarriello's resignation this week, pointing the finger at some board members for recent decisions and their treatment of Guarriello. Behind her are, from left, board members Linda Leewright, Bryan Eichfeld and Tracy Magnotta.

The resignation–effective July 1–of Saucon Valley High School Principal Beth Guarriello this week provoked strong emotions from attendees at the Saucon Valley School Board meeting Monday night, with one board member telling his colleagues to consider whether their actions prompted her to leave, after a parent criticized the board for the way she said it treated her.

A half dozen teachers began the dialogue by telling the board that Guarriello is one of the best administrators they have worked with, and lamenting the fact that she will soon be leaving the district.

“Beth was consistently aware of our needs,” said high school English teacher Megan Hauser, who told the board that Guarriello would always open her door to students and staff “without hesitation.”

Math teacher Cheri Chisesi praised Guarriello’s community outreach via social media–outreach that included the use of a new high school Facebook page–and said she even found time to bake treats and bring them in for others to enjoy.

“It’s like we’ve lost the wind in our sails,” said science teacher Cameron Fowler, who commented that Guarriello’s leadership has made him feel more confident in the district than he has felt in a long time.

But why did Guarriello–who was not present at the meeting–decide to resign her position in favor of another one at Southern Lehigh?

She has an employment history with the adjacent, larger district, having previously served as a ninth and tenth grade assistant principal there. And the principal position there pays $8,000 more per year than her current job does.

It is unknown whether either of those facts contributed to her decision, and they weren’t speculated upon at the meeting Tuesday, although Saucon Source readers brought them up in comments on Facebook following the publication of news of her resignation earlier this week.

Board members said they were surprised by the news that Guarriello was leaving.

Susan Baxter said she was “extremely disappointed and shocked” when she learned Guarriello was resigning, and said fingers shouldn’t be pointed at one another at this time because the district needs to work together.

“The board had no prior knowledge of her decision,” Baxter said.

“It’s time for some truth,” she said, addressing Baxter. “Your statement that nobody on the board knew that this was happening is false. I will hope that you don’t know better, but you don’t have the right to say that if you don’t know that all other eight members didn’t know. I do know that people on this board knew, and if you want to interrogate me about how I know that, I have the proof and the evidence.”

Altemose had earlier in the meeting asserted that some of the board members are at least indirectly responsible for Guarriello’s decision to leave Saucon Valley, because they went against a recommendation she and a teacher made to purchase a complete set of hardcover textbooks instead of e-books for an AP psychology class–a class Altemose said her daughter will be taking next year–and in another instance “publicly chastised” Guarriello for authorizing $2,500 in transportation funds for a chorus trip.

In December 2014, the board did in fact approve money for the Saucon Valley Challenge Choir to travel to perform at Carnegie Hall in New York City in April 2015. However, it approved $150 for the use of school vans, rather than $2,500 for a high-end coach. In fact, the entire amount it approved for the trip–including lodging, transportation, tolls and substitute teachers–was $1,150, or less than half of what was requested this year in trip transportation funding alone. (Source: Saucon Valley School Board meeting agenda, Dec. 2, 2014, p. 41.)

In the case of the textbook recommendation–which Altemose claimed was made based upon scientific research that has proven students learn better from physical books–she accused the board of ignoring the advice of Guarriello and a teacher in order to save $5,000.

Board members disputed that.

Bryan Eichfeld, who jokingly referred to himself as “Mr. Cheap,” said “five thousand dollars in a $46 million budget is not the thing that keeps me awake.”

The board needs to move forward by embracing things like technology, and then if there is a problem with it, that can be addressed later, he said.

Hardcover textbooks will be available in the classroom, but they will not be individually assigned to students to take home.

Board member Cedric Dettmar said there is often resistance to change in the district. He encouraged those who oppose the use of an e-book in a class to try to have an “open mind” in order to help the district move forward.

And board president Michael Karabin said that if he can read and learn effectively by using an Android device, students can learn from e-books.

“I think it will come out rather well,” he said of the decision to use e-books.

A vote to approve the use of the e-books passed 6-3, with board members Sandra Miller, Mark Sivak and Tracy Magnotta voting against it.

That decision again met with criticism from Altemose, who told the board:

I will be buying out of my own funds that book so that (my daughter) has it to take home. The vote and the decision based on the fact that these textbooks are going to be sitting in the classroom is absurd… They need the book at home. The argument that you’re going to use our 60 students taking an important AP class as guinea pigs to figure out whether e-textbooks are better than physical textbooks is a horrendous, horrendous decision on your part. And the statement that if it doesn’t work we’ll talk about it… Well when exactly do you think you’re going to find out if it doesn’t work? When they take the AP test and they don’t do as well as the kids at Southern Lehigh or the kids at Parkland or the kids at Nazareth that have the hardcover textbooks. That’s when you’re going to find out. And that’s too late for those kids who take that class next year. It won’t be too late for my child, because she’s going to have the book, but I’m guessing that a lot of the other 59 students taking that class can’t afford to buy that book themselves.

Perhaps Altemose’s strongest rebuke for the board came when she accused some members of trying to create an untrue narrative about why Guarriello is leaving Saucon Valley after just eight months with the district.

“She didn’t go looking for another job. They came to her,” she claimed.

And after her treatment by the Saucon Valley School Board, “who could blame her?” was Altemose’s rhetorical question. 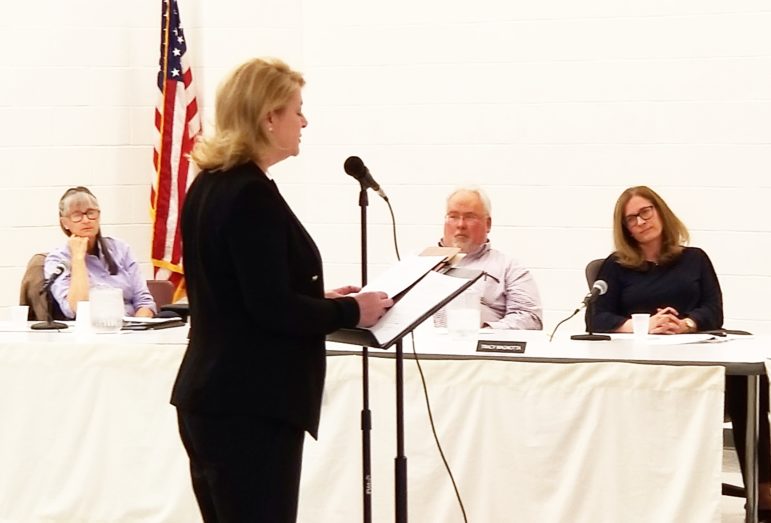 Saucon Valley parent Jennifer Altemose was outspoken in her criticism of the school board following high school principal Beth Guarriello’s resignation this week, pointing the finger at some board members for recent decisions and their treatment of Guarriello. Behind her, from left, are board members Linda Leewright, Bryan Eichfeld and Tracy Magnotta.

“This board and administration doesn’t like anyone who disagrees with them,” Altemose claimed, adding that the fact that the district will have now gone through four high school principals in three years is a “red flag of dysfunction.”

She predicted that the next high school principal will be a “yes man” who will take orders from a “handful” of board members she alleged are “currently running the district.”

At least one board member appeared to take her rebuke to heart.

“Clearly, collectively, we screwed this one up pretty bad,” said Dettmar with reference to Guarriello, adding that he “literally felt nauseous” when he learned she was resigning.

The board now needs to take a “hard look in the mirror” to make sure that any errors it made in its treatment of an employee are not repeated in the future.

In voting to approve Guarriello’s resignation, other board members did not speculate about the specific reasons for her departure, although they universally expressed regret that she is leaving.

Eichfeld said he wasn’t sure if the board could have done anything differently, and added that he never knew if Guarriello was upset by the board’s treatment of her.

Whether they knew or didn’t know she planned to resign, the board is ultimately to blame, Altemose concluded.

“You wish you knew. You wish you could have done something. Why aren’t one of you asking why didn’t you know?” she said. “Your high school principal did indicate to this school that she was feeling non-supported. … She did tell this school that she wanted changes. Why aren’t you asking what could you have done and why didn’t you know this was happening?”

For her part, Guarriello said in a statement Monday that she will miss Saucon Valley.

“I hope the entire community realizes what a caring, expert staff they have to help shape the minds and hearts of the children entrusted to their care,” she said.

She later told the Morning Call that she didn’t feel Saucon Valley was “the right fit” for her at this time.

The entire school board meeting–which was streamed in real time–can be viewed on YouTube.

The next Saucon Valley School Board meeting will be held May 22 at 7 p.m. in the Audion room at the high school.

Karabin said the next regularly scheduled board meeting on May 8 has been canceled because the board will be going on an administrative retreat.