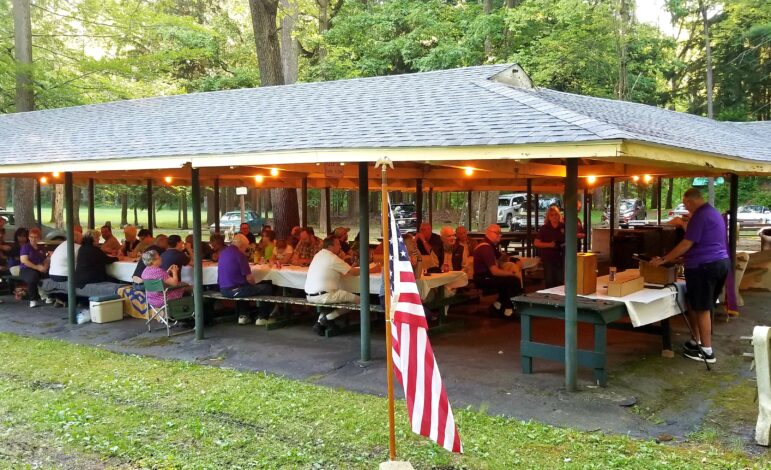 Members of the Hellertown Lions gather under the Alfred J. Fritchman Reservoir Park pavilion with its new roof at their annual picnic Thursday, which was also Flag Day. The roof cost nearly $11,000 and was installed by Julius Laslo Roofing of Lower Saucon Township. The Hellertown Lions raised half of the funds needed to pay for the new roof.

The weather was perfect and the turnout was large Thursday evening for the Hellertown Lions’ annual picnic at Alfred J. Fritchman Reservoir Park in Lower Saucon Township, at which the club’s ‘Lion of the Year’ was recognized, new officers and board members were installed, and a new roof on the park’s historic pavilion was dedicated.

Lions International District Governor-elect Karlene Laub explained at the dedication ceremony that at a function held at the park last year, club members noticed that the pavilion roof was in disrepair. 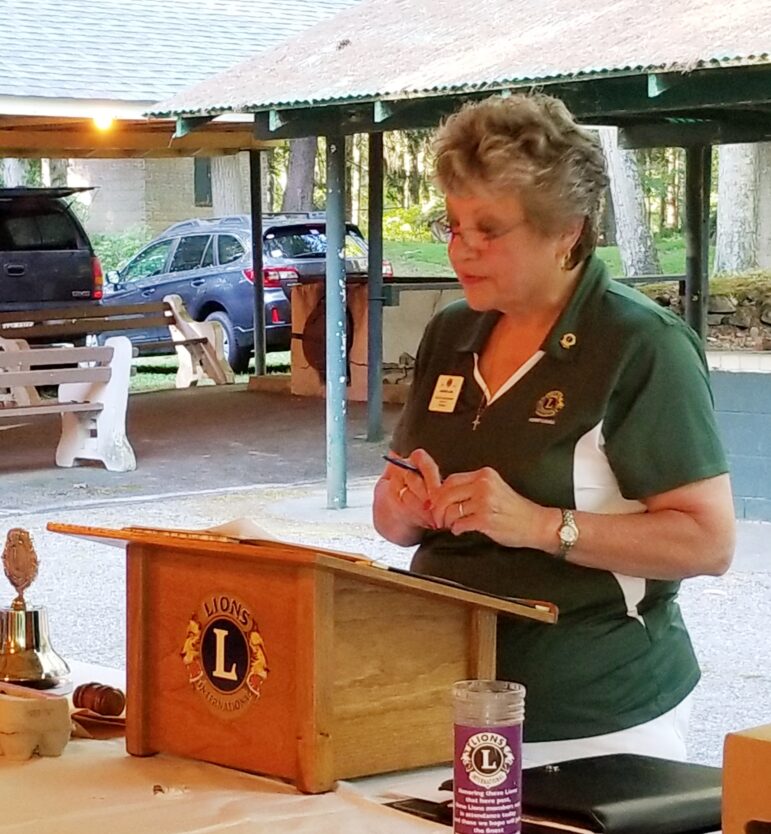 The Borough Authority did not have the funds to replace it, so Lion Debbie Heidecker-Repash chaired a fundraising effort that ultimately raised half of the nearly $11,000 that was needed to replace it. Matching funds were provided by the state Lions organization.

“I commend you for all you’ve done,” Laub told members of the club, who later presented representatives from the Borough Authority with a ceremonial check and committed to continue to help maintain the park, which is enjoyed by people from throughout the area. 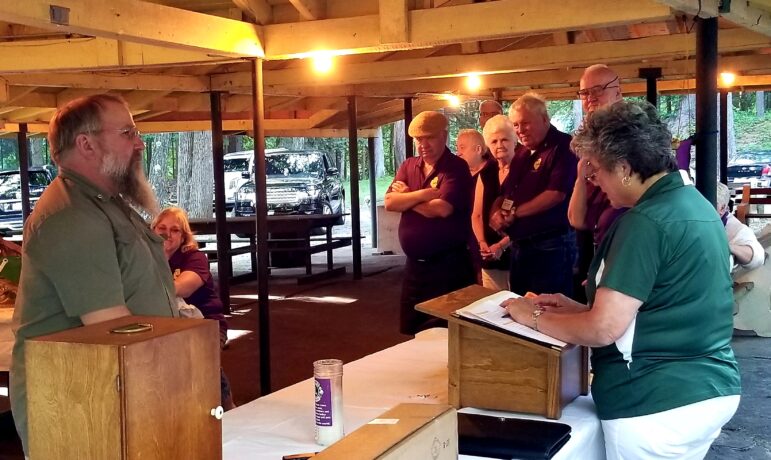 Another highlight of the evening was the presentation of the Lion of the Year award to club President-elect Jesse Repash, who has been active in many of the group’s altruistic endeavors, from their aluminum can recycling program to their popular hot dog wagon.

“I’ve been involved with the Lions for a long time, most of my life,” Repash said, noting that he is following in the footsteps of his father, a former Lion. “I really appreciate this.”

“He has truly achieved the Lions’ motto of ‘we serve,'” outgoing president Bruce Browne said of Repash, of Lower Saucon Township. 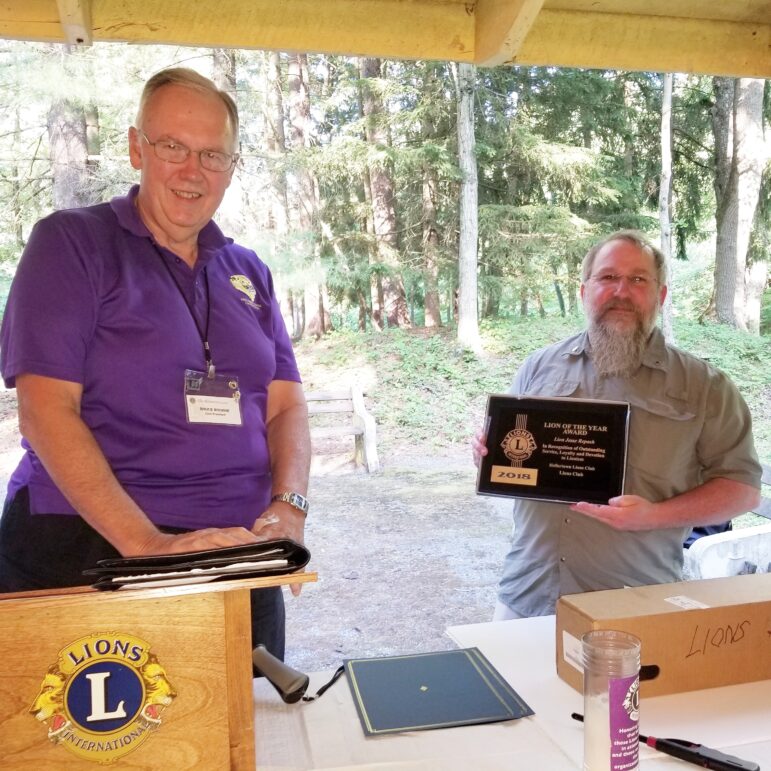 Many other appreciation awards were presented to club members for their dedication to serving the organization, which in turn benefits the community.

A special award was also presented to Lion Cathy Leibensperger for her outstanding leadership and dedicated service as secretary to the organization over the last four years.

Repash and the other new club officers will assume their duties July 1. 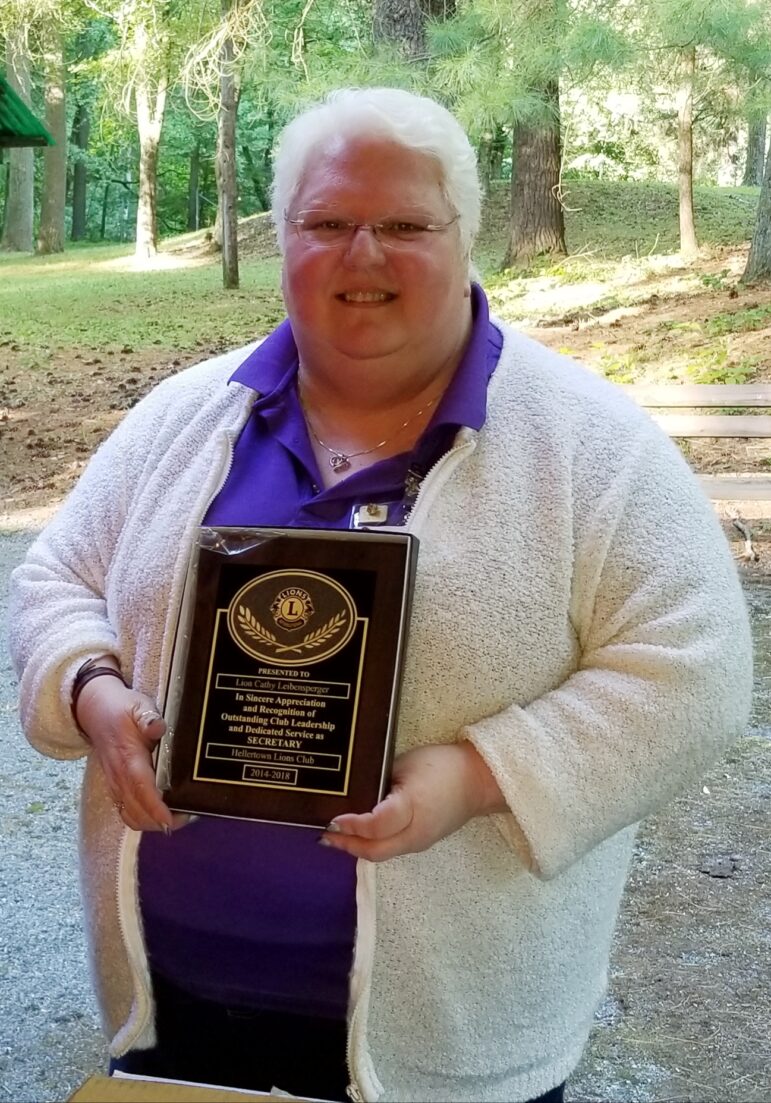 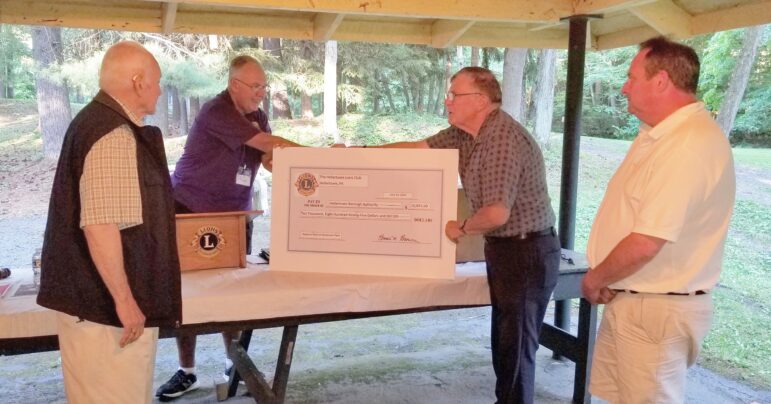 A commemorative check for $10,895 was presented by Hellertown Lions Club President Bruce Browne to Hellertown Borough Authority board vice chairman Joe Delfoe (left), HBA administrator Glenn Higbie (second from right) and HBA board assistant secretary Mike McKenna (right) to pay for the replacement of the park pavilion’s roof; a job that was recently completed by Julius Laslo Roofing. Although the pavilion was built by the Hellertown Lions, the Lower Saucon park in which it is located is owned by the Hellertown Borough Authority, which did not have the funds needed to replace the aged roof.