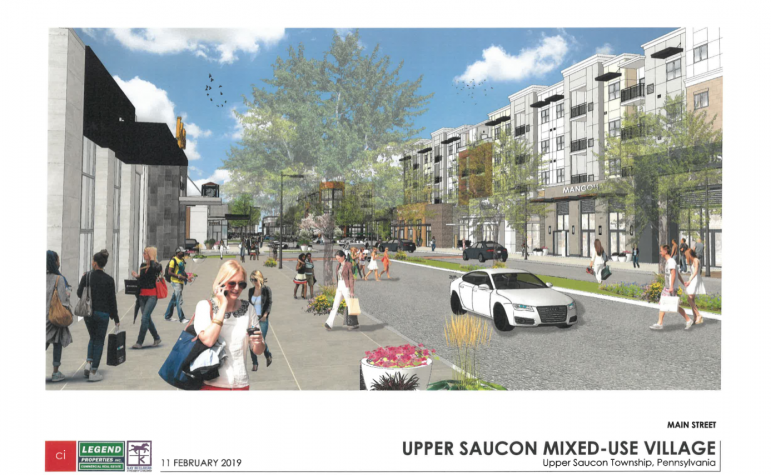 Part of the proposed design aesthetic included with the plan is this artist’s rendering of a ‘Main Street’ area.

A mixed use development proposed for approximately 120 acres along Rt. 309 between Center Valley Parkway and E. Hopewell Road in Upper Saucon Township is drawing concerns from local officials and residents; concerns which are expected to be shared at an upcoming board of superviors meeting on Wednesday, April 10 at 6:30 p.m. at Southern Lehigh Middle School.

The meeting will include a presentation by Kay Builders Inc., of Allentown, which is proposing construction of nearly 900 residential units behind a retail/town center area that would be built around an as-yet unnamed supermarket along Rt. 309. The entire property is located between Rt. 309, Center Valley Parkway, E. Hopewell Road and E. Valley Road.

Kay Builders has shared site plans and renderings of buildings of the same architectural “design aesthetic” as those the development would include.

Depicted in the renderings are buildings as tall as six stories, a “Main Street” area, fountains, green space and retail buildings that would occupy pad sites. 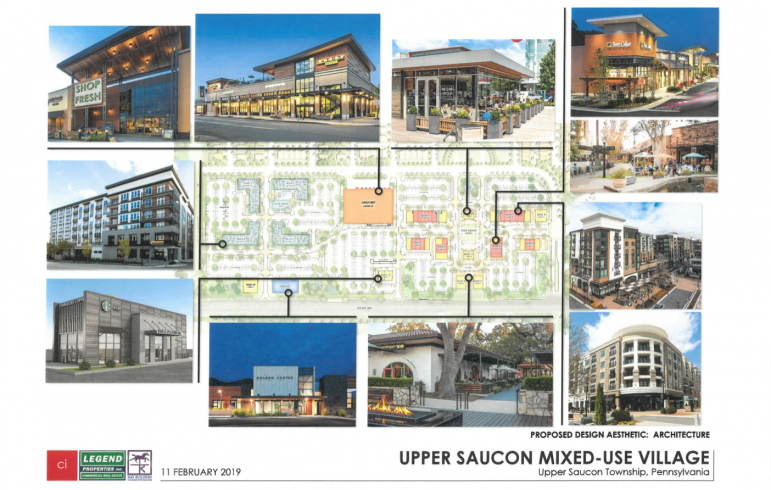 Artistic renderings of architecture that is part of the proposed design aesthetic of the plan. 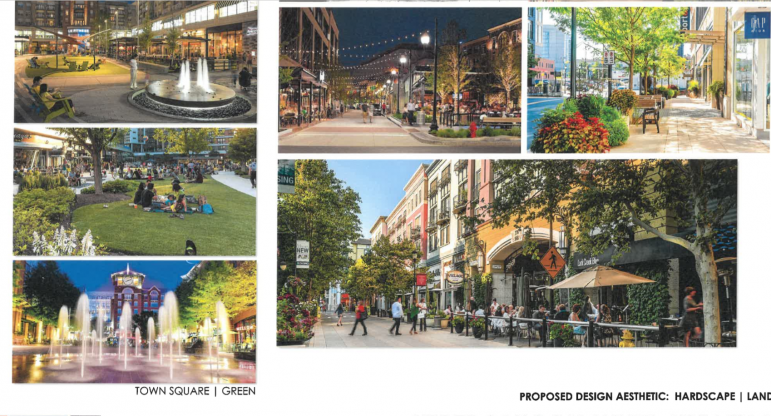 Proposed design aesthetics for the plan.

Two of the retail locations depicted on a Proposed Design Aesthetic rendering are Starbucks and Peet’s Coffee.

“Although we cannot yet name the (proposed) grocery store, they have a flexible business model to match the local demographic,” Kay Builders said in a Feb. 14 project overview letter. “Their lowest end store would be considered well above the typical chain we see locally and their higher in store, which we would envision here, exceeds anything we have locally.”

The company said it has partnered with Legend Properties, which it described as a retail specialist, and CI architecture of Baltimore on the plans.

“Some concerns have been raised regarding traffic and traffic/delivery noise created by a grocery store,” Kay said in its overview. “We have strategically placed the store to buffer the residential area behind it from traffic and parking and lighting. Although deliveries would be in the back closer to the residential, there will be a sizable buffer and it should be noted that deliveries occur typically in the morning and afternoon. There are typically only 6 to 7 larger truck deliveries and 10 to 12 small truck deliveries daily.”

According to a March 15 memorandum from Upper Saucon Township Director of Community Development Trish Lang to the township’s Board of Supervisors, other concerns were raised by township planning commission members when Kay Builders president Rick Koze and his consultants presented their project overview to the commission March 5. 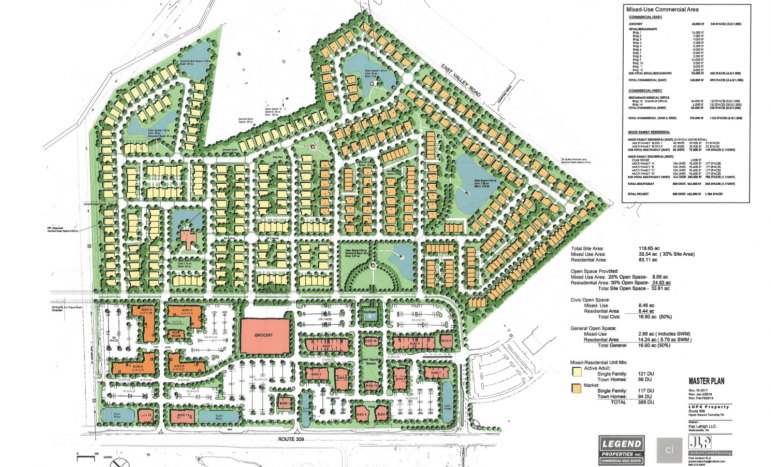 This site plan for a mixed use residential/retail development proposed by Kay Builders for a 120-acre parcel along Rt. 309 in Center Valley was recently submitted to Upper Saucon Township officials.

Lang said the following concerns were raised at that meeting:

“Based on these concerns…the commission was unanimous in recommending to the Board of Supervisors that the zoning of the site not be changed to accommodate this mixed-use proposal,” Lang said.

In its Feb. 14 overview, the company noted that “approvals for 95 upscale residential units on this property are pending,” but if the Rt. 309 project is approved won’t be needed. In that case “the township…will be receiving 95 acres of prime recreation space that is otherwise ready for a housing development.”

Kay Builders also noted in its overview that “the base zoning of the (Rt. 309) property permits warehouses as a conditional use or residential conservation as a permitted use. It is estimated that the property would yield approximately 1 million square feet of warehouse space or 350-400 units of mixed use residential. Although either of these uses is acceptable to Kay Builders we would rather pursue alternative zoning that would be more useful and attractive to the community as a whole.”

“This is far from a typical development and is much better for the community than the current zoning,” it said. “Upscale architecture and the establishment of the town center surrounded by an upscale residential development with mixed housing types will create a community unlike any other in the area. It’s all about the architecture and variation of building facades.”

The public is invited to attend the April 10 Upper Saucon Board of Supervisors meeting and provide input on the proposal.