Have you been told you snore while you sleep? Do you sometimes awake suddenly from deep slumber gasping for breath? Are you often tired during the day?

If you answered “yes” to any of these questions, you might have a condition called obstructive sleep apnea (OSA). Getting a sleep study done at one of St. Luke’s University Health Network’s sleep disorder centers can tell you for sure.

Obstructive sleep apnea is a common and dangerous–but manageable and sometimes preventable–disorder that affects 40-50 percent of Americans, with incidences increasing as we collectively grow physically larger. If you’re one of them, you’re not alone.

Obstructive sleep apnea happens when your upper airway in the back of your throat becomes partially or totally blocked by the soft, fatty tissue hanging down and touching the back of your tongue. This prevents air from entering your lungs, which hampers the healthy exchange of unhealthy carbon dioxide for oxygen to feed the brain.

Men over 50 years of age who are overweight with shirt neck sizes greater than 17 inches are the most likely to have this sleep disorder. But younger men can develop it, as can women of all ages. Persons of Asian heritage also run a high risk for OSA due to their tendency to have a small chin and short neck. Alcohol and opiate use can double the likelihood of developing sleep apnea.

Giuseppe Guglielmello, DO, a board-certified pulmonary medicine/critical care specialist and sleep specialist at St. Luke’s, explained that chronic loss of a good night’s sleep from OSA can have far-reaching and serious consequences beyond daytime fatigue. 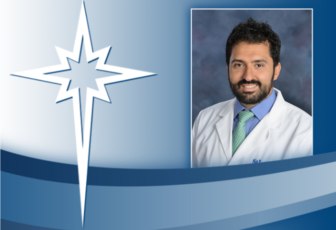 “When the brain doesn’t have the benefit of prolonged periods to rest and recharge, and is aroused frequently during deep sleep, a cascade of troubling conditions can develop over time,” he said.

These can include heart arrhythmias and heart failure, breathing abnormalities and respiratory failure, confused thinking, memory loss, anxiety and depression as well as the development of insulin resistance and diabetes. Chronic sleep apnea can also lead to heart attacks and strokes. Preventing these health threats starts with having an accurate diagnosis.

The gold standard for determining if someone has sleep apnea is the sleep study, which is performed in the hospital, at a sleep center or at home. It’s an overnight test administered by a sleep specialist during which respiratory rates, heart function and brain waves are measured while the subject sleeps. The sleep specialist meets with the patient afterwards to give the results of the study and discuss next steps.

STOPBANG is the acronym used by physicians to screen for sleep apnea, which can lead to the need for a sleep study. The letters stand for:

Losing weight can help avoid or reverse sleep apnea, though as we age, our likelihood of developing it increases.

The most common treatment for obstructive sleep apnea is the CPAP (Continuous Positive Airway Support) machine, which pushes air through a mask or nasal “pillow” into the user’s lungs during sleep. A BiPAP is basically a CPAP but with settings for inhalation and exhalation. Supplemental oxygen can also be used with a BiPAP machine in extreme cases. Both devices have modern versions that can monitor and adjust pressures based on the user’s sleep depth or sleeping position.

Other methods for treating OSA include surgical removal of the soft tissue in the upper throat to clear it of obstructions and dental devices that pull the lower jaw forward to provide an opening in the upper airway.

When choosing a treatment, sleep physicians will discuss the benefits and effectiveness of each option with patients.

Helping you get a good night’s sleep

The awareness of someone’s obstructive sleep apnea often starts with a bed partner who is bothered by snoring and might witness episodes of sudden arousal from sleep and gasping for breath. Dr. Guglielmello encourages people to be vigilant of these incidents of poor “sleep hygiene,” as well as of changes in the person’s sleeping habits, altered moods and decreased daytime energy levels.

“Bringing them to the attention of the person and encouraging consultation with their doctor can be critical steps toward helping someone receive medical help to avoid a serious, and sometimes life-threatening condition,” he said. “The value of getting a good night’s sleep, every night, is irrefutable.”

Dr. Guglielmello recalls treating an unresponsive, obese man in his late 50s in the ICU. The man was suffering from respiratory failure due to an accumulation of fluids and carbon dioxide in his lungs. He had been having breathing problems and thinking difficulties for several years and hadn’t been able to work. Dr. Guglielmello diagnosed him with extreme sleep apnea, which began the patient’s recovery process.

After two days on a mechanical breathing machine, a ventilator and medicines that reduced the excess fluids, Dr. Guglielmello transitioned his patient to a BiPAP breathing device that added oxygen to the man’s lungs. These treatments gradually reversed the man’s critical condition, and he was able to leave the hospital after two weeks.

Once discharged, the patient continued using the BiPAP at home, started exercising and lost weight. Today, he no longer needs supplemental oxygen, has returned to work and is much healthier than he had been in years.

“Though sleep apnea is greatly under-diagnosed and often overlooked as a cause of many serious health problems, diagnosing and treating it can make an enormous difference in someone’s life,” said Dr. Guglielmello.

Make an appointment for a sleep test today!