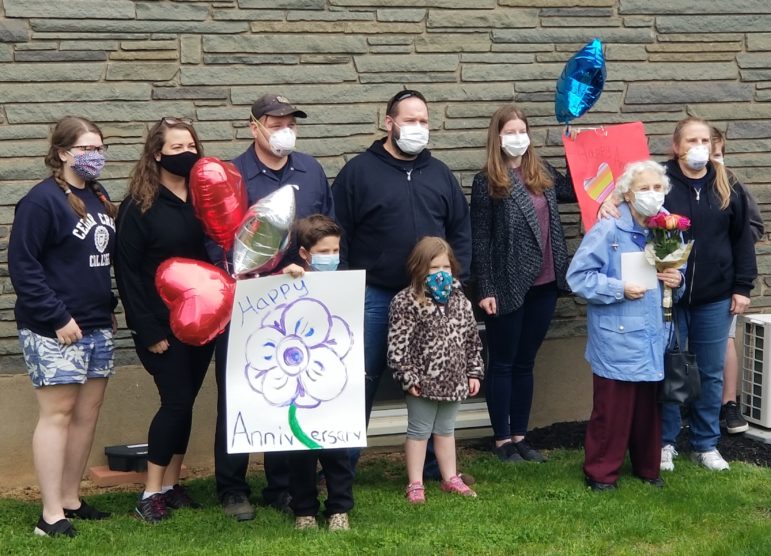 The family of Ed and Janet Chesley gather outside New Eastwood Healthcare & Rehabilitation Center in Wilson to celebrate the couple’s 59th wedding anniversary. Ed, who is a resident of the center, beamed as he looked down from his window at the signs and balloons his wife, daughter, grandchildren and great-grandchildren held. His wife Janet, pictured at right holding a bouquet, said faith has been the secret to their marriage’s success. Face masks were worn by the family due to the COVID-19 pandemic, which has made visiting relatives inside personal care homes impossible due to safety concerns.

The coronavirus has put a halt to many things in recent months, but one thing it has a hard time overcoming is love. That was clear Wednesday at New Eastwood Healthcare & Rehabilitation Center in Wilson borough, where a couple celebrated their 59th wedding anniversary together, even as the virus kept them apart.

New Jersey natives Edward “Ed” and Janet Chesley were married on May 6, 1961 and raised three children together, one of whom was present for the special celebration.

Ed, 87, is currently a resident of the Fairview Avenue facility, where he waved and smiled from a first floor window as his wife, daughter and grandchildren stood outside holding up hand-painted “Happy Anniversary” signs and balloons to mark the special occasion.

Originally from Belleville, Essex County, “we both grew up in the same school,” Janet said, when asked about how they first met.

Today, the Chesleys live in Lopatcong Township, Warren County, and it was their proximity to Easton that made New Eastwood a good choice for her husband’s care.

They didn’t expect to be apart on their special day, which was why the center’s staff stepped in to help them create happy memories of it, even serving a cake and ice cream.

Their caring and attention to detail helped make up for the fact that there would be no anniversary dinner this year, Janet said. Also helpful was the technology that allowed them to video chat, as many other families in the same situation are now doing.

Unable to be there for the party outside the facility were the couple’s two sons–one of whom lives in Arkansas and one of whom is in Hawaii–however their daughter Yvonne, who lives in Harmony, N.J., was present, as were some of their nine grandchildren and four great-grandchildren, and there is hope for a larger family reunion in June.

“I’m just overwhelmed,” said Janet, who held a bouquet of flowers as she explained how faith has been the secret to their marriage’s success.

“We’ve had God in our lives,” she said. “We brought up our children to honor him.”

Congratulations to the Chesleys on a very special wedding anniversary. 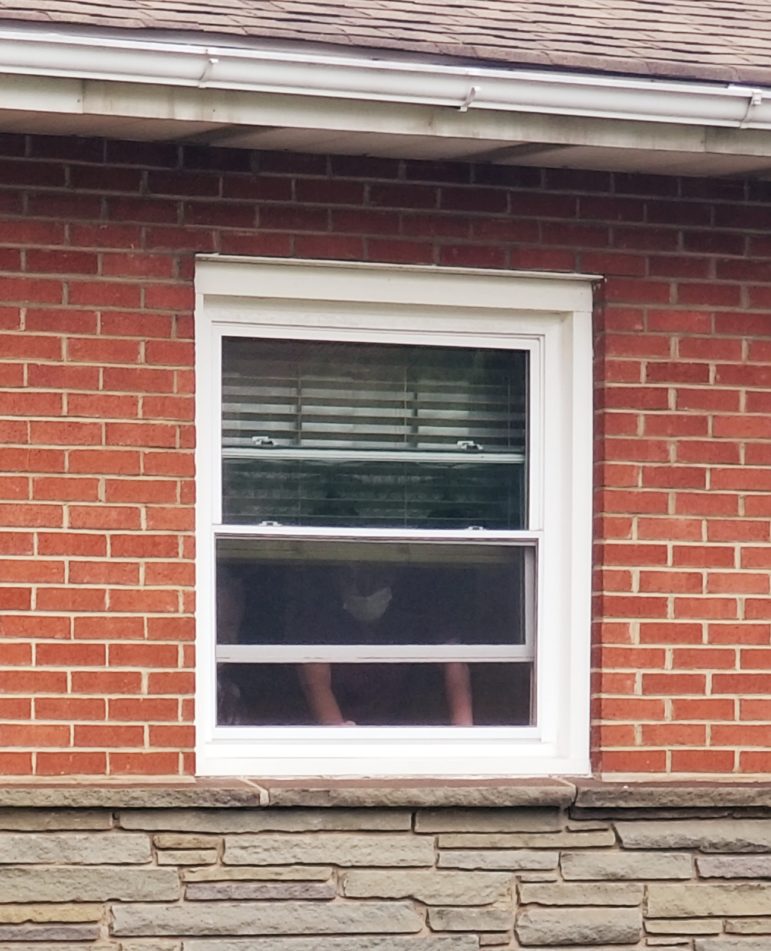 Ed Chesley looks out from his window at New Eastwood Healthcare & Rehabilitation Center in Wilson. 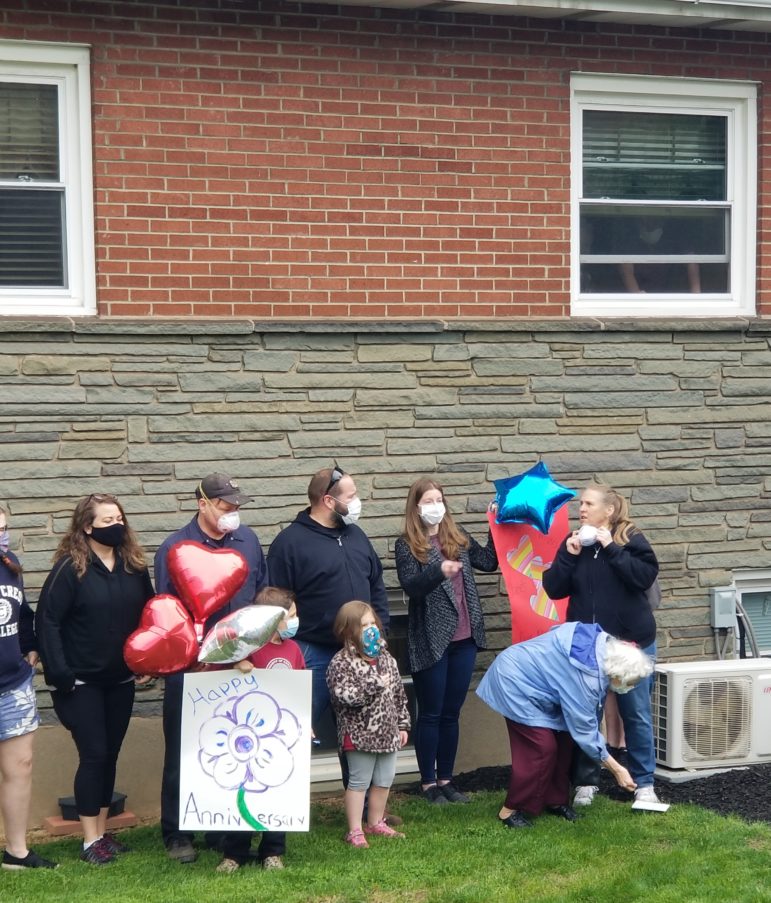 Family members of Ed and Janet Chesley were assisted in celebrating their anniversary by the caring staff of New Eastwood Healthcare & Rehabilitation Center, who painted signs, purchased balloons and organized a cake and ice cream for everyone. 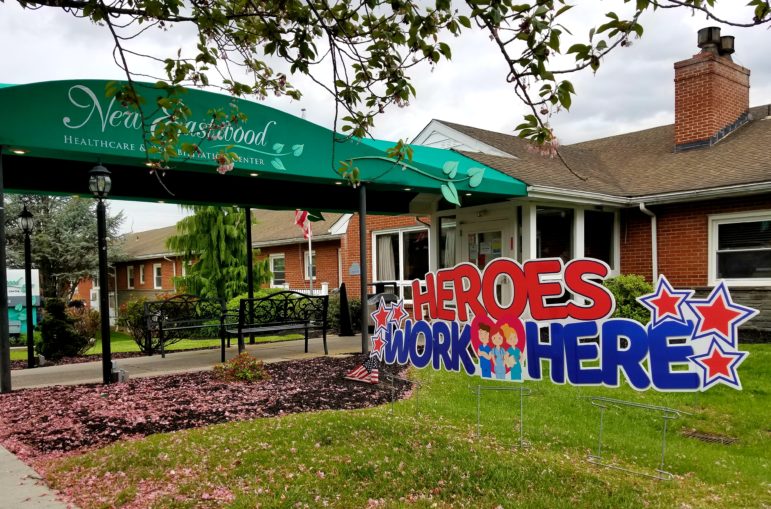 A sign outside New Eastwood Healthcare & Rehabilitation Center in Wilson borough celebrates the heroes who work in the center caring for patients in the midst of the coronavirus pandemic. 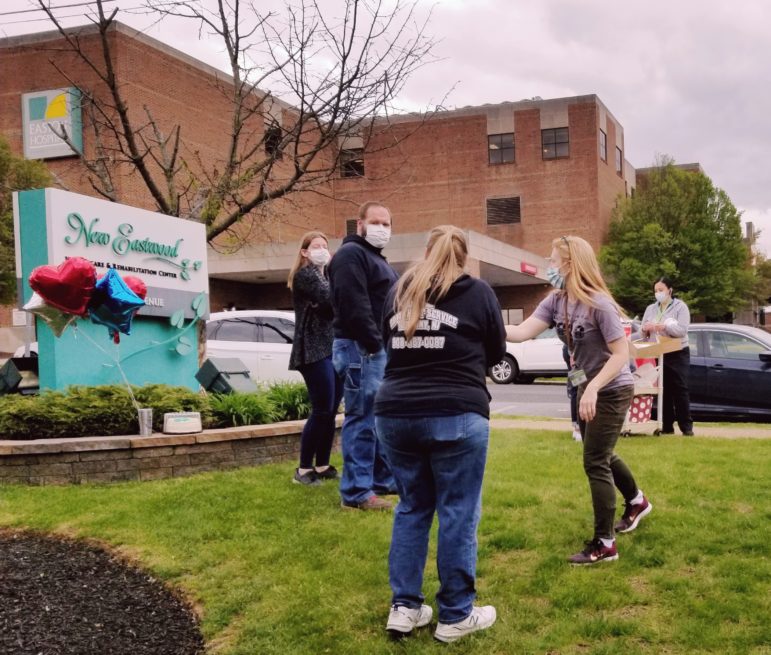 Staff from New Eastwood Healthcare & Rehabilitation Center in Wilson borough distribute cake and ice cream to the family of Ed Chesley, who is a resident there. His family held a 59th anniversary celebration for Ed and his wife Janet outside the building Wednesday, since entry is currently prohibited due to the coronavirus pandemic. 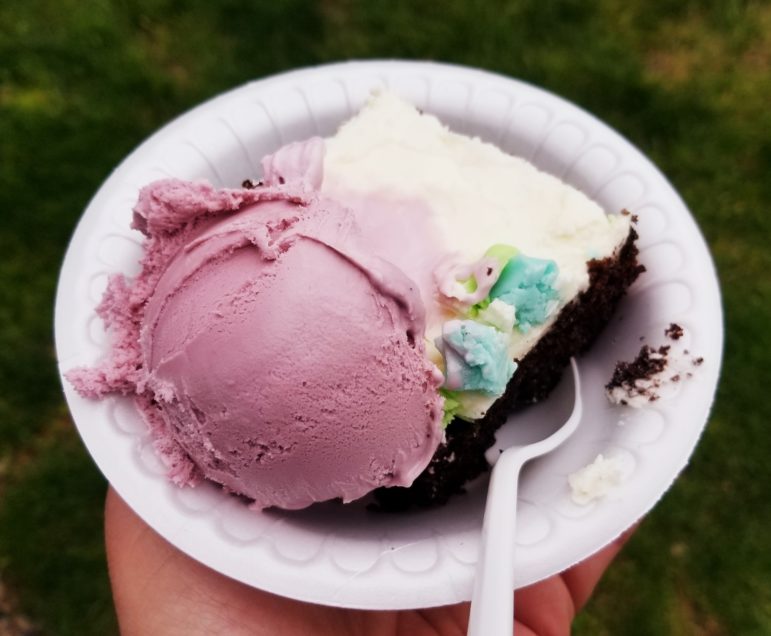 It was a bit chilly for ice cream, but the delicious treat was enjoyed by all.