Please stop praising Saucon Valley schools. Just stop. They don’t need your help. They’re not only skilled at patting themselves on the back, but they seem almost systematically dedicated to the practice. If parading purported parental approval were a class, the district would get straight A’s.

It’s been a rough week for those who are comfortable fooling themselves. Practically before the gum had sealed on the Saucon Valley HS Class of 2021’s plump graduation gift envelopes, that (and here I’m being ironic) local Destroyer of All Things Feelgood about Saucon Valley—Saucon Source—comes along and does its job by reporting some news no parent wants to hear.

This time, it’s the story of Russell Carawan, a former school counselor and student mentor program director arrested last week for allegedly having sex with a minor in Florida. For almost a decade, between August 2006 and September 2015, Carawan plied his trade along, yup, Panther Way.

Of his past work in Saucon Valley, Carawan’s LinkedIn brags: “I work with those students who are most at risk of academic and social failure due to emotional and/or behavioral issues. Partnering with the faculty, administration, students and their families/support group we establish goals and objectives to improve the ability to become successful in life. My goal is to not only impact those students identified, but the entire district through innovative K-12 student lead programs.”

The Carawan affair was not even glancingly addressed at this week’s school board meeting, in spite of the fact that in 2018, he voluntarily surrendered his educator certification and employment eligibility to serve as a charter or cyber charter school staff member or a contracted educational provider staff member under an order from the state’s Professional Standards and Practices Commission. The order was drafted after the Pennsylvania Department of Education filed a Notice of Charges against Carawan in 2017, alleging that he “engaged in boundary violations with several female students while employed as a counselor with Saucon Valley School District.”

The fact that none of this was publicly known till Carawan was charged in Florida is just the latest example of a lie that gives rise to the district’s outrageously distorted self-image.

The district website’s landing page absolutely screams Panther Pride. I guess that’s fine, but please don’t mistake it for academic achievement, or for a healthy learning environment, or for community equity; all areas where we have serious gaps.

We also have a continuing problem with transparency. Exhibit A are those colorful parent “check in” pie charts put out by the district last academic year to “measure” (I use the term loosely) how parents felt about their children’s education during the pandemic. Just in time for school board elections, the survey results depict levels of parental satisfaction that seem pretty fishy to me. 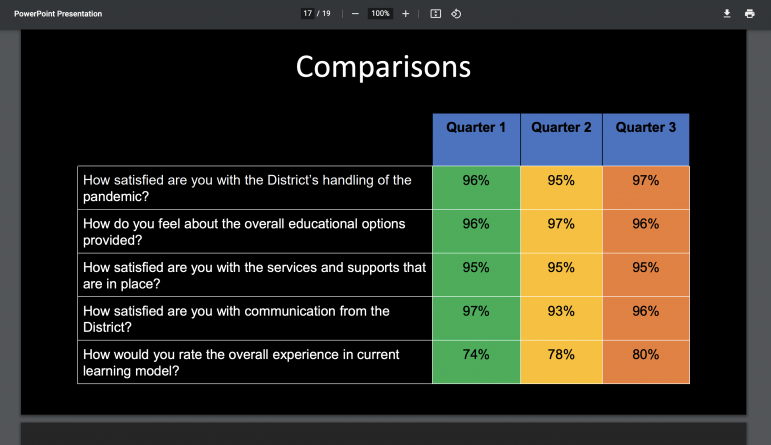 The PowerPoint slides—unsophisticated in their appearance—grossly oversimplify reality. On chart after chart, we see almost zero dissatisfaction in the district among parents. One of the worst among these slides—a summary of three surveys—asks parents: “How satisfied are you with the District’s handling of the pandemic?” It then displays levels of satisfaction at 96, 95 and 97 percent over three quarters. Sound too good to be true?

You need the whole story, which the district doesn’t clearly provide. To get those numbers, the district completely games the system. How? First of all, the survey only drew about one-third of parents—a self-selecting group, too. This isn’t clear on the survey at all, and I had to ask two officials to get a straight answer about it. It’s also not surprising that parents most invested in a positive narrative might be drawn to completing the survey, too.

The rest of Saucon parents last year were presumably busy dealing with things like the deaths of relatives on ventilators and lost jobs and mental health struggles, and perhaps didn’t feel like taking part in the district’s exercise in self-satisfaction.

Beyond the small survey sample, in the example above, the survey asks questions that frame issues in terms of how parents feel about their own parenting choices. What parent wants to say on a survey that they feel they made bad choices? Other parts of the survey overtly limit opportunities for negative perspectives, or laughably tilt the scale towards positive responses.

I’m not the only one who has noted all this. District resident and Saucon Valley High School graduate Mark Salgado* said at a recent school board meeting that he felt the district had crafted the survey to elicit a certain outcome.

“I feel like the response choices left plenty of room for parents to indicate their satisfaction, while there was little room to indicate if they were dissatisfied,” he told me. “It seems like the survey was written that way to make the district look better and essentially validate their ideas that they were doing well handling the pandemic.”

This school district and a certain subculture of parents are almost militant in their need to project the awesomeness of Saucon Valley. I’m all for boosting our local economy and real estate values, but public education is not a business. It’s public education. There is no need and in fact much potential harm in defending our image. We’re mostly supposed to be improving and refining student learning outcomes, not marketing ourselves.

Our children don’t care about the Saucon Valley school “brand,” and if they do, they’re going to be in for an unpleasant surprise when they wake up in their mid-30s realizing that re-living high school eventually gets old.

Far more diverse and economically disadvantaged districts in Northampton County—Wilson Area School District is one example—spend less on students, carry smaller budgets and yet often rank about the same nationally and regionally, and some, such as Wilson Borough Elementary, put ours to shame. Other Lehigh Valley schools, including Parkland, Emmaus, Nazareth and Liberty high schools, have all been doing a better job of placing graduates into Harvard, MIT and Princeton than Saucon Valley High School has.

I’m a bit of a bystander in this. I pay tons in taxes, I send my kid to Catholic school and I don’t frankly give a damn about the Saucon Valley schools’ “brand.” What I do care about are how tomorrow’s young citizens in my community are educated.

So thank heavens for citizens such as Mark Salgado. We need people more of his caliber to demonstrate both critical thinking skills and a willingness to speak up. He’s a better advertisement for what Saucon schools can produce than all the pie charts on the web.

Bill Broun is a writer who lives in Hellertown.

*Mark Salgado is a freelance writer who has reported stories for Saucon Source.

Note: Opinion editorials about local topics of general interest are published at the discretion of the publisher. To submit a commentary for publication, email josh@sauconsource.com.

4 thoughts on “Some in Saucon Valley School District Need a Reality Check: Op-Ed”