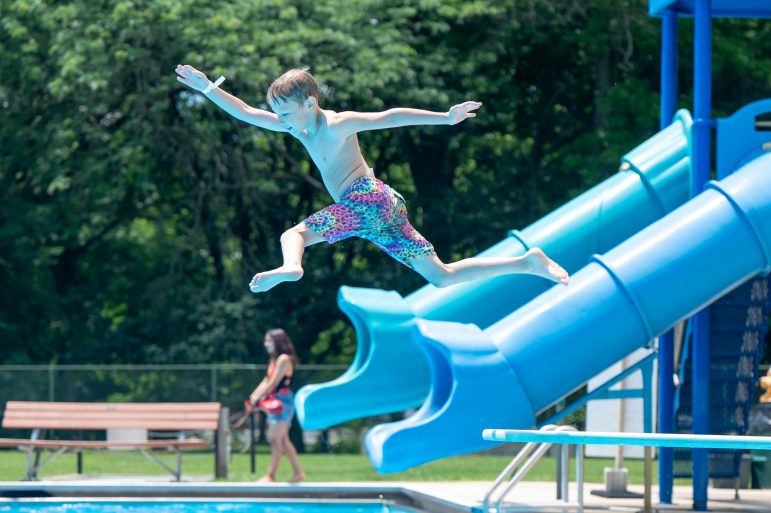 What a difference a week makes. There was a festive atmosphere on the Hellertown Pool’s opening day June 23, but the theft of a beloved piece of poolside memorabilia and an incident that drew borough police Tuesday have darkened the summer celebration. In response, borough officials suspended daily admissions for the remainder of the summer as of June 30.

Note: For an update on the decisions about the pool that were made Tuesday, click here.

If you don’t have a season pass to the Hellertown Pool and are ineligible for one under new rules, you won’t be swimming there as of Wednesday; at least, not this summer.

Borough officials issued a news release Tuesday evening in which they announced that both non-resident and resident daily admissions to the pool are being suspended, effective June 30, due to “a drastic increase in crowd size, staffing issues and safety concerns for both patrons and staff in addition to general unruliness and inappropriate behavior by the patrons.”

The news release did not mention any specific incidents, but a pool visitor reported that shortly before 4:30 p.m. Tuesday, two police cars and patrolmen arrived at the facility.

The source said it was unclear what had prompted the police response, but that they witnessed “what looked to be an altercation from across the pool.”

Saucon Source has requested additional details from borough officials about the events of the day, and whether the rule changes are in any way related to the theft of a beloved clown head barrel topper which was recovered and returned to the pool on Tuesday.

As of Tuesday, police were reportedly reviewing surveillance footage as part of their investigation into that incident.

Hellertown Borough Council President Tom Rieger confirmed Tuesday that borough police will be visiting the pool on a regular basis to ensure that rules are being followed.

In addition to the suspension of daily ticket sales for the remainder of the 2021 season, other rule changes are being implemented at the pool, in response to the reported issues.

Borough officials said additional non-resident season passes will not be sold this season.

Only residents of Hellertown borough and Lower Saucon Township may now purchase season passes, and proof of residency will be required at the time of purchase.

Additionally, the price of season passes sold from here on out will not be prorated.

Pool passes are available for purchase at Hellertown Borough Hall, 685 Main St., Hellertown, from 8 a.m. to 4 p.m., Monday through Friday.

Season pass rates for residents are as follows:

The season pass application as well as additional information about pool rules and regulations may be found on the Hellertown borough website’s Parks & Recreation page.

The Hellertown Pool opened one week ago, and perhaps due to the fact that many other pools in the area remain shuttered or are operating at limited capacity, has been drawing larger crowds since then. A heat wave that began Sunday and prompted the issuance of a National Weather Service heat advisory has also made it a popular destination this week.

The borough’s news release made it clear that the pool’s popularity has become a problem in need of immediate solutions.

According to the news release, no refunds will be issued to individuals who are barred from the Hellertown Pool.

The pool is open daily from noon to 7 p.m., weather permitting, through Sunday, Aug. 22.