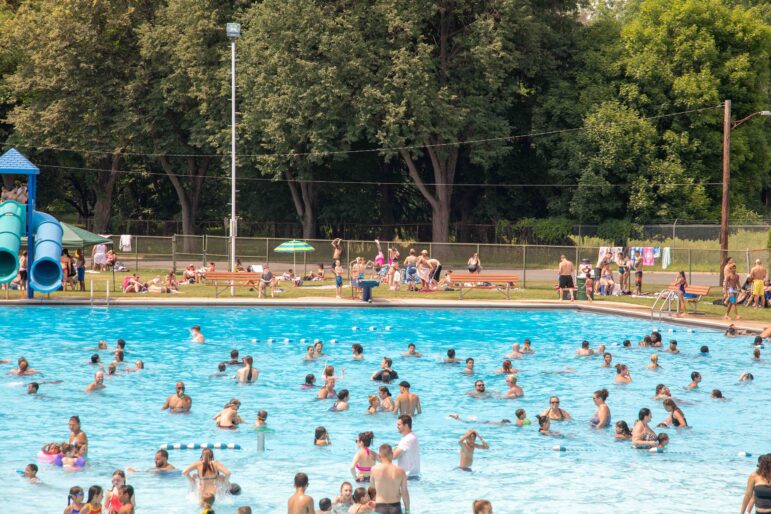 The Hellertown Pool was built in 1939 and is big enough to accommodate hundreds of swimmers on a hot day. (FILE PHOTO)

After it was announced Tuesday that the Hellertown Pool would suspend all daily admissions for the remainder of the 2021 summer season due to disrespectful behavior by patrons–among other reasons–many local residents took to social media to complain that the decision to stop resident daily admission sales was unfair.

Numerous individuals commenting on a Saucon Source Facebook page post about the new admission requirements said they only visit the pool on occasion, and that it doesn’t make financial sense for them to purchase season passes, which the borough said would be required for borough and Lower Saucon Township residents starting Wednesday.

Others cited economic hardship as the reason they or friends or family members might not be able to buy season passes, and some residents bemoaned the fact that relatives such as grandparents who live in nearby municipalities would no longer be able to visit the pool with their grandchildren.

Some also said they supported the changes, and shared anecdotes about the alleged misbehavior of other patrons over the past week, when a heat wave combined with the closure of other area pools to funnel large crowds to Hellertown’s iconic swimming pool.

In a news release issued Wednesday afternoon, borough officials responded to the criticisms and announced some modifications to the season pass requirement for residents, while continuing to stress that the changes were made with safety in mind.

Officials had said the reason pool admission requirements were updated was due to a combination of staffing issues, unruly and “inappropriate” behavior by patrons and safety concerns for both patrons and staff. It is known that borough police responded to the pool Tuesday for what was reported to be some type of altercation, but officials haven’t said what happened or why it contributed to the decision to stop daily admission sales.

A piece of equipment–a clown-shaped trash barrel topper–was stolen from the pool over the weekend. The clown figurehead was found Tuesday and returned, but it remains unknown if that had anything to do with council’s decision to further restrict admission.

“If you had all the facts, as we heard last night, from the Borough Manager, the Chief of Police and the Public Works Director, YOU would agree that the decision made, even though not favorable to all, was certainly the correct decision for these ongoing actions,” Wednesday’s news release said. “Social media always has opinions, but it doesn’t give the reasons why council came to these decisions.”

Officials reaffirmed in the latest statement that a “lack of lifeguards and support staff” as well as a “lack of respect of our personnel” were behind their decisions, and called Tuesday “a very sad day in Hellertown” as well as “the culmination of a week of  multiple unfortunate and disastrous events and actions that led to the unfortunate and decisive action to limit pool access to season pass holders.”

However, the news release did not include any specifics regarding incidents that led to the decisions, which were made at an emergency borough council meeting Tuesday night.

Saucon Source has requested additional information about what led to the pool-related decisions, and in lieu of that, for the reasons why no such information is being released.

Hellertown Borough Council President Tom Rieger reiterated that the general rationale for the pool changes was a “clear lack of respect for rules and people in authority.”

He also confirmed that there are “several active ongoing investigations by the Hellertown Police Department” into pool-related incidents, but declined further comment on them.

In an effort to help quell the criticism of the new pool admission guidelines, the borough also announced in Wednesday’s news release the following modifications to them:

Hellertown Borough and Lower Saucon Township residents may continue to purchase season pool passes at Borough Hall, however all non-resident pass sales have ceased. The season pass application as well as rates may be found on the borough’s website.

“The decisions made (Tuesday) were never intended to hurt anyone financially,” officials said in Wednesday’s news release. ”But there need to be serious consequences for those making poor choices that affect the integrity, safety and rules/regulations of our pool.”

The pool rules, which were included in the news release, may be found below as well as online at HellertownBorough.org.

Hellertown Pool Rules
1. Be respectful and obey the lifeguards.
2. No running, pushing or horseplay.
3. Ball playing of any kind is prohibited.
4. Personal flotation devices, rafts or floats are permitted only in the shallow area.
5. No cut-offs or street clothes are allowed in the pool.  Pool appropriate attire must be worn. Infant “swimmy” diapers are required.
6. The area between the ropes in the deep end is for lap swimming only.
7. Diving is restricted to areas 8’ deep or deeper.
8. Children under 10 years of age must be accompanied by a parent or guardian.
9. Food & drink is permitted in the grass area only–not on the pool deck.
10. No gum or tobacco products are allowed within pool areas.
11. No littering.
12. No alcoholic beverages, weapons or contraband are permitted.
13. The maximum cooler size is 2’ x 2’ x 2’.
14. The maximum tent size is 5’ x 5’.

*ALL RULES ARE SUBJECT TO THE INTERPRETATION OF POOL STAFF*

*If a lifeguard blows three fast consecutive whistles, a water rescue is in progress.  Swimmers should clear the pool.
*If a lifeguard stands up and blows one prolonged whistle continually, swimmers should clear the pool as quickly and safely as possible.
*Anyone entering the pool is subject to search along with any bags, coolers and containers they are carrying. Any illegal weapons or contraband found will be seized and
will result in criminal charges.

The Hellertown Pool is located at 575 Durham St., Hellertown, opposite Dimmick Park.

The pool is open from noon to 7 p.m. daily, weather permitting, through Sunday, Aug. 22.

In other pool-related news, the Fountain Hill municipal pool–which, like the Hellertown Pool, has faced serious staffing issues–opened for the first time this season on Tuesday.

Johnson, a former lifeguard, became recertified in order to help out at the pool this summer.

One thought on “Officials Respond to Criticism of Hellertown Pool Decisions”