The unusual odyssey that began when a vintage clown head barrel topper was stolen from the Hellertown Pool came to a happy ending Tuesday after the iconic midcentury metal curiosity was discovered discarded along Depot Street, not far from the facility.

Group member Matthew Keiper posted in the Hellertown, Pennsylvania Facebook group that local EMS personnel found the clown “in a tree” and returned it to the pool’s lifeguard entrance. 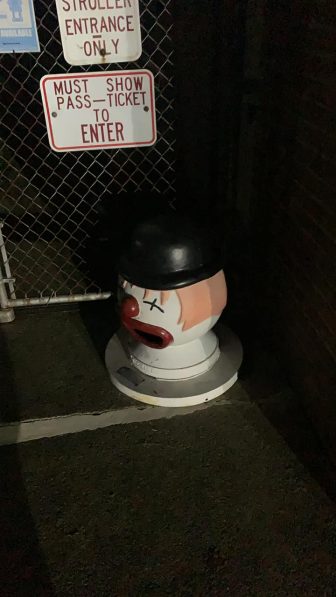 The news elicited virtual sighs of relief from dozens of local residents, who were upset by the revelation that someone had taken a piece of sacrosanct borough memorabilia.

It is unclear how old the metal clown barrel toppers are, but such decorative items were popular from the 1950s through the 1970s, according to an eBay listing for a similar item.

By Tuesday, reward money totaling $300 was being offered by the Hellertown Police Department, the Lower Saucon Police Officers Association and Main Street Gym owner Kevin Branco for information leading to the successful arrest, prosecution and conviction of the person or persons responsible for stealing it.

In response to questions about existing security at the pool, borough officials said on Facebook that there is video surveillance in place at the facility, which can attract as many as 1,000 patrons on a busy day.

The Hellertown Borough Authority is headquartered next to the pool and also has security footage of the premises. Saucon Source has learned that borough police were reviewing their footage Tuesday, after it was reported that at least one person who may have been involved in the theft was captured on surveillance video Saturday night.

“To jump a fence and steal this piece of our property–we are coming for you!” an emotional Mayor David Heintzelman posted Monday, in response to the person or persons responsible for the theft. “There is no reason for this!” he said. “Our borough was not built on disrespectful, pathetic and repulsive persons that steal for self-satisfaction!” 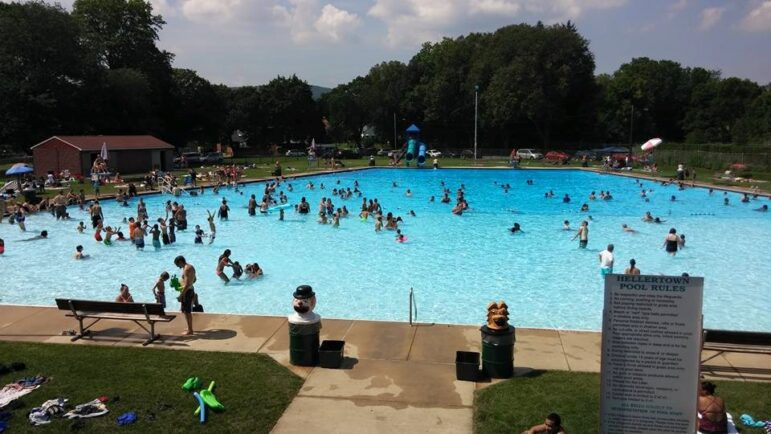 The Hellertown Pool is always popular on hot summer days. The clown head barrel topper can be seen in this file photo of it.

It has been an eventful week at the Hellertown Pool, which opened for the 2021 season on June 23, after being closed in 2020 due to the coronavirus pandemic.

This summer, the pool opened about two weeks later than it normally does, due to a lifeguard shortage.

The pool closed early Monday, reportedly due to an incident in which someone vomited while in the water. Such incidents are not uncommon, particularly during hot spells, and typically require a brief temporary closure to ensure swimmer safety.

Monday’s high temperature reached the low 90s, and with highs of 95 forecast both Tuesday and Wednesday, the pool was expected to continue attracting large crowds.