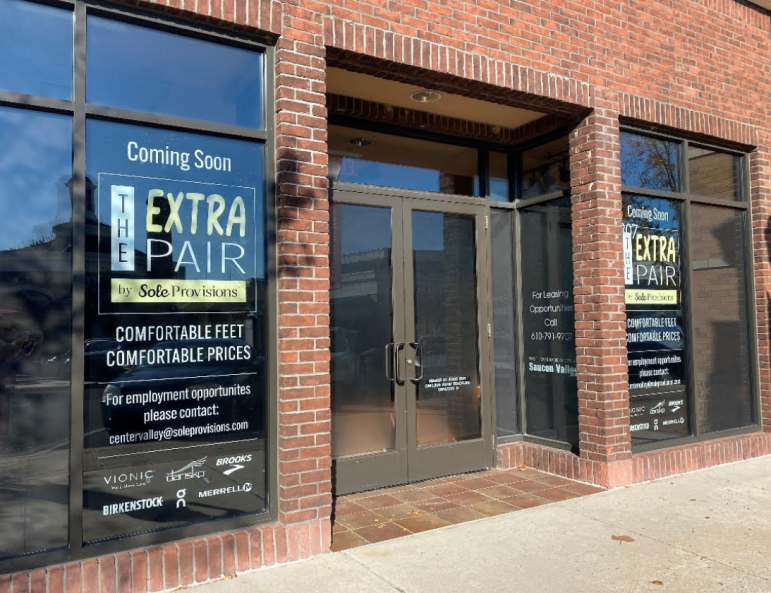 The Exta Pair by Sole Provisions, a fashion footwear store, will open in the Promenade Shops at Saucon Valley in mid-November.

Shoppers will soon be able to step into a fashion footwear store in the Promenade Shops at Saucon Valley.

The Center Valley lifestyle center announced Thursday that The Extra Pair by Sole Provisions will open in Suite 307 (between Dandelion and Chico’s) in mid-November, with a grand opening celebration featuring giveaways, discounts, raffles and more scheduled for Saturday and Sunday, Dec. 11 and 12.

The Extra Pair is part of the Sole Provisions family of shoe stores founded by Holden Nagelberg in 1991. Nagelberg’s first store opened in Huntington, N.Y., in 1997, after he discovered “there was a huge unfulfilled demand” for fashionable women’s shoes designed with comfort in mind, according to the company history at SoleProvisions.com.

“Welcoming a new tenant to join our current mix is always exciting,” said Promenade Shops Marketing Director Krista Berardelli in a news release about the opening. “The Extra Pair offers a robust collection of shoes for men, women and children which is something we were in search of and are thrilled to welcome to the shopping center!”

Several other businesses have recently opened in the Promenade Shops, which is home to more than 70 retail and restaurant spaces. Among them have been European Wax Center, La Femme Boutique, Go! Calendars, Toys & Games and All Weather Selvedge Denim Co., which is owned by former NFL player and Parkland High School graduate Andre Williams.

The Promenade Shops regularly hosts special events throughout the year, and with the holiday season right around the corner, Berardelli announced earlier this week that its Tree-Lighting Ceremony will be held in-person the Saturday before Thanksgiving.

Visit ThePromenadeShopsatSauconValley.com for more information about upcoming events, hours, a map of the center and more.