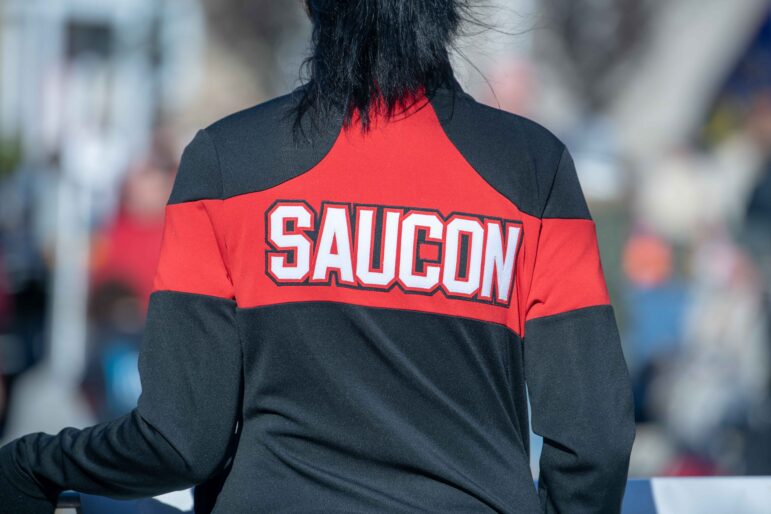 The 2021 Saucon Valley Spirit Parade will be held in Hellertown on Sunday, Oct. 24 beginning at 2 p.m. (FILE PHOTO)

It’s been a few years since Hellertown has played host to a big parade, so organizers of Sunday’s Saucon Valley Spirit Parade and borough officials are taking extra steps to inform the community about the event, which will begin at 2 p.m.

In an email Thursday, Hellertown officials confirmed that the parade route will be as follows:

All roads within and around the parade route will be shut down by 1:30 p.m., the email said. Those roads will remain closed to traffic until the conclusion of the parade, which means that residents who live along or within the parade loop won’t be able to enter or leave the area by car for at least a couple of hours.

Detours will be in place for Main Street traffic, but motorists should expect delays if they will be traveling through any part of Hellertown during the parade.

Borough officials also warned residents and others not to move barricades that will be in place because of the detours.

“When you see a barricade blocking the street, (it) doesn’t give you the right to move it,” the email said. “There is usually a reason. Think ‘parade’ on Sunday. Stay alert and don’t drive in the parade route, please!”

The email also noted that individuals removing barricades in order to drive down a closed road during the parade “happens every year.” 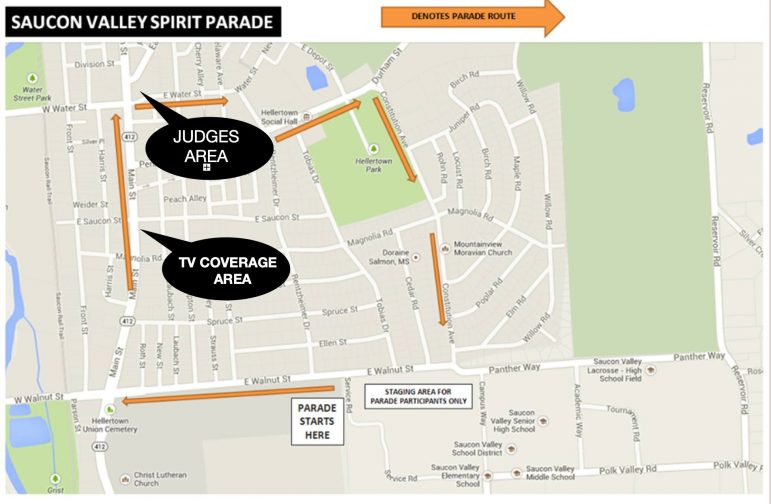 The 2021 Saucon Valley Spirit Parade will follow its regular route through the borough of Hellertown, beginning and ending at the entrance to the Saucon Valley School District campus on Walnut Street. Residents who live within the “parade zone” will not be able to enter or exit the area–except in cases of emergency–from approximately 1:30 p.m. until the parade’s conclusion.

Of course, the last time the Saucon Valley Spirit Parade was held was in 2018.

In 2019, heavy rain forced its cancellation, and last year restrictions on public gatherings during the coronavirus pandemic made it virtually impossible to hold Halloween parades and other large-scale, in-person events.

There is no rain date for the Saucon Valley Spirit Parade, however as of Thursday the weather forecast for Sunday, Oct. 24 appeared meteorologically auspicious. According to the National Weather Service, the day’s high will be 61 degrees and skies will be sunny.

If the weather Sunday is nearly perfect, a crowd of thousands will line the borough’s streets to watch the parade, which means spectator safety will also be a concern.

In the borough’s email, organizers reminded parents to keep a close eye on their children, particularly since candy will be thrown from moving vehicles in the parade.

The parade is entirely run by volunteers and supported by donations, with many local businesses sponsoring bands or supporting the event in other ways.

Some businesses like Lost River Caverns are perennially impacted by the closure of roads during the parade, and borough officials urged residents to support them as well.

Other things to know about the 2021 Saucon Valley Spirit Parade:

Perhaps most importantly, parade organizers asked for the community’s patience and understanding if they encounter minor inconveniences because of the parade. To that end, residents can expect to receive an automated phone call by the end of this week, advising them about road closures and when cars will need to be removed from along the parade route. (No parking signs are expected to be posted along the route by Saturday.)

Saucon Source photographer Chris Christian will be covering the parade, so look for lots of great photos of the bands, floats, dignitaries, fire trucks, police cars, spectators and more on Monday.

Borough officials also took the opportunity Thursday to remind residents that Trick-or-Treat in Hellertown borough as well as Lower Saucon Township will be held Sunday, Oct. 31 from 6 to 8 p.m.