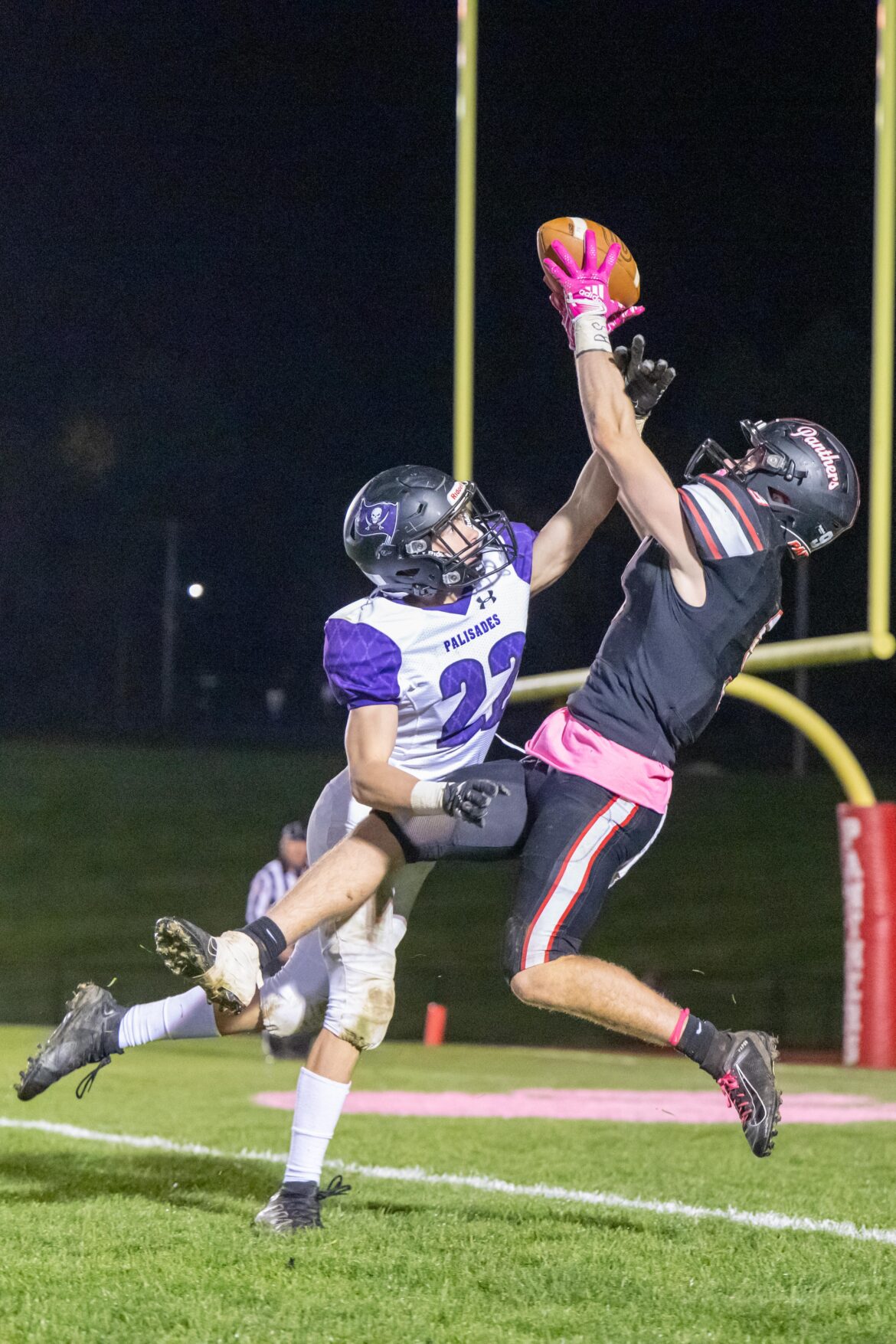 Saucon sophomore Jared Rohn high-points the ball in an attempt to make a big play for the Panthers.

Friday night was Senior Night and the Palisades Pirates (7-2) sailed into Hellertown for a football fight against the struggling Panthers.  Saucon Valley (3-6) had lost five of their last six games while Palisades rattled off five straight victories to build an impressive 7-2 record. Nonetheless, it was “Rivalry Week” and anything could happen.  Last year in a downpour the Panthers won 24-3.

The Panthers won the coin-toss and deferred their option until the second half.  Palisades took possession at their own 23-yardline and put together a pretty good drive moving all the way to the Panther 28-yardline.  Facing a 4th & 3 the Pirates good fortune came to an end when Saucon Valley linebacker Jared Rohn knifed into the Palisades backfield and tripped running back Steven Lilly before he could pick up the first down. 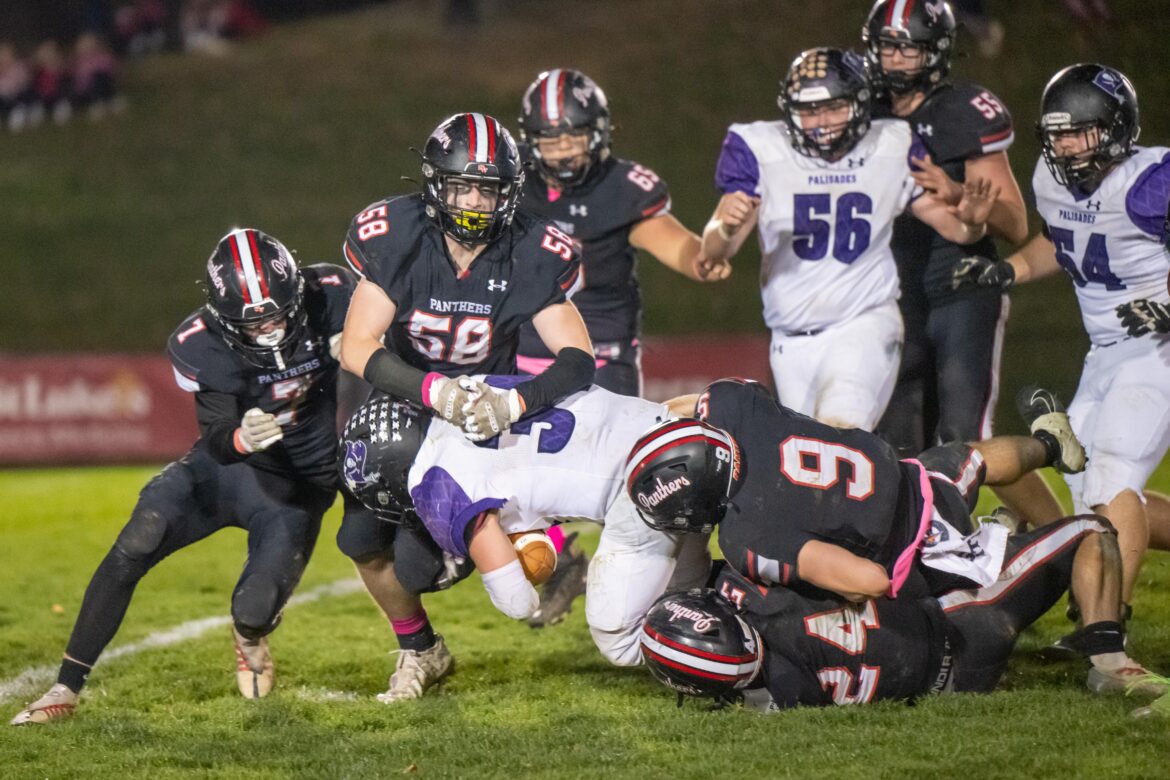 Jared Rohn (9) and the Panther defense making a big stop.

The Panthers picked up a couple of first-downs and drove back to Pirate territory.  However, a sack on 3rd & 17 from the 39-yardline led to a 4th & 27 punting situation.

The two teams exchanged a couple of punts to start the second quarter.  Palisades finally broke through to light the scoreboard by completing a 78-yard drive for a score.  Featuring a 53-yard run by Steven Lilly and a 25-yard completion from quarterback Kai Stiansen to running-back Kyle Kirsch who slipped out into the flat from the backfield, the Pirates took the lead with a 1-yard power run by Lilly for a touchdown.  The PAT hit its mark and with 5:10 remaining in the first half Palisades held a 7-0 advantage. 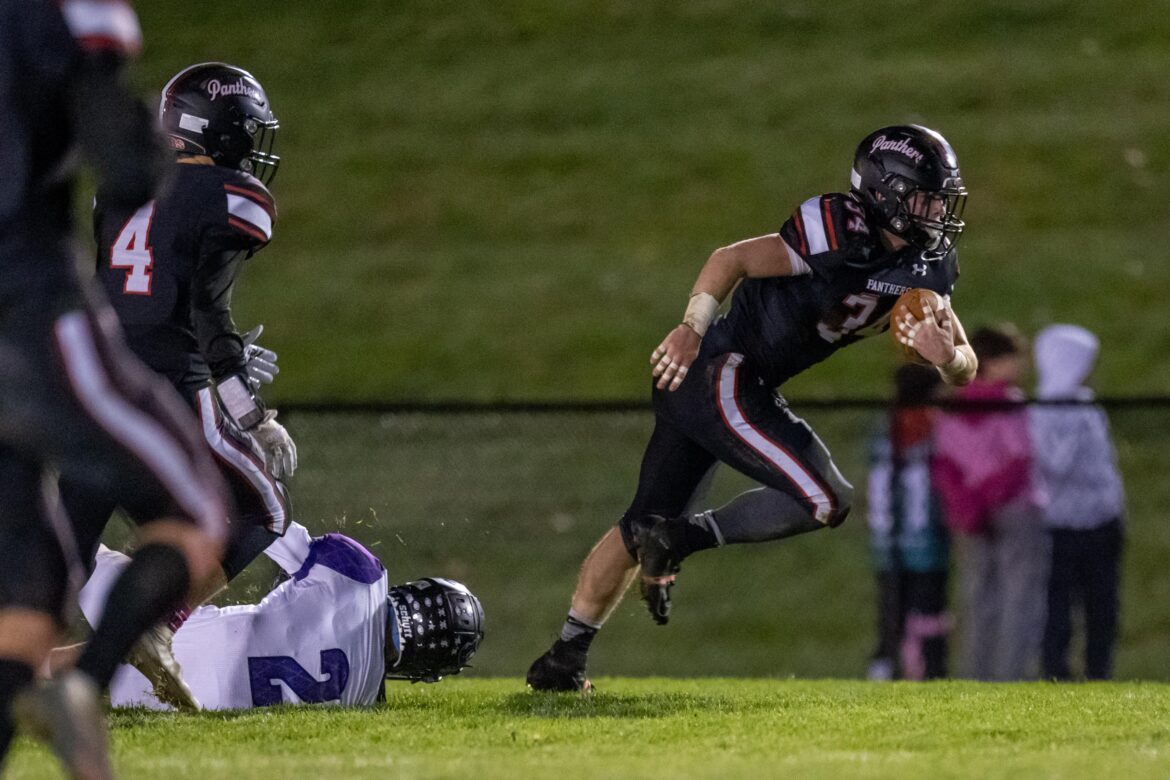 Saucon Valley quickly answered back.  Senior running-back Ty Pfizenmayer bull-dozen his way for a 23-yard pick-up when he trucked a couple of Pirate tacklers.  The Panthers were helped with a late-hit out of bounds on the play for a 15-yard add-on.  Two plays later Luke Shimko fired a pass to Jack Robertson on a little slant pass.  Robertson broke a tackle and spun-out of a second.  He then raced his way untouched the remaining 33-yards for the score.  Brayden Schriffert converted the extra-point and with a little over three minutes left the game was knotted at 7-7. 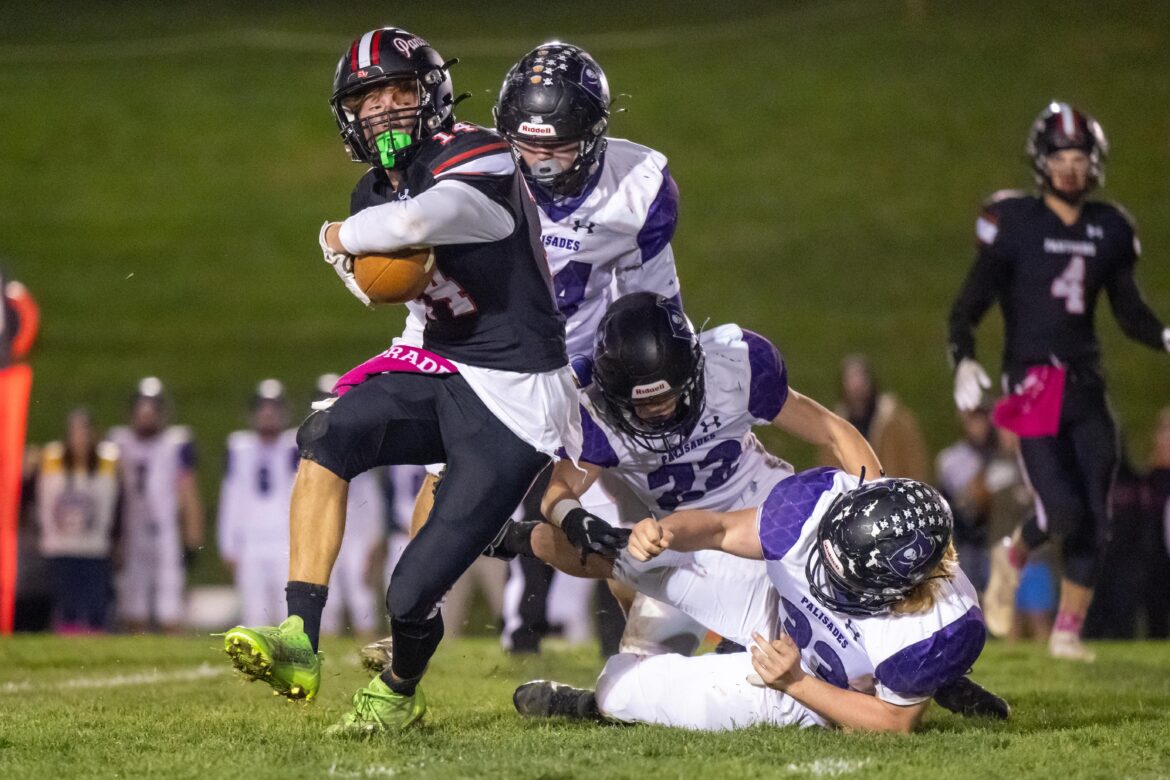 Sophomore Jack Robertson (14) spins away from the Pirate defense and races for six points.

The Pirates threatened in the waning seconds of the opening half, but were unable to convert a 32-yard field goal attempt.  The two teams took their tie score into intermission.

The Panther offense failed to get any traction to start the third quarter and were forced to punt after three plays.  The punt, however, was fumbled by the Pirates gifting the Panthers a 1st & 10 at the Pirate 20-yardline.  Once again Saucon had trouble moving the ball and tried a 37-yard field goal that just missed wide-right.

Palisades was able to manufacture a 10-play, scoring drive back the other way that was set up by a Kyle Kirsch 26-yard run.  Steven Lilly was credited with the score from 6-yards out on 1st & Goal. 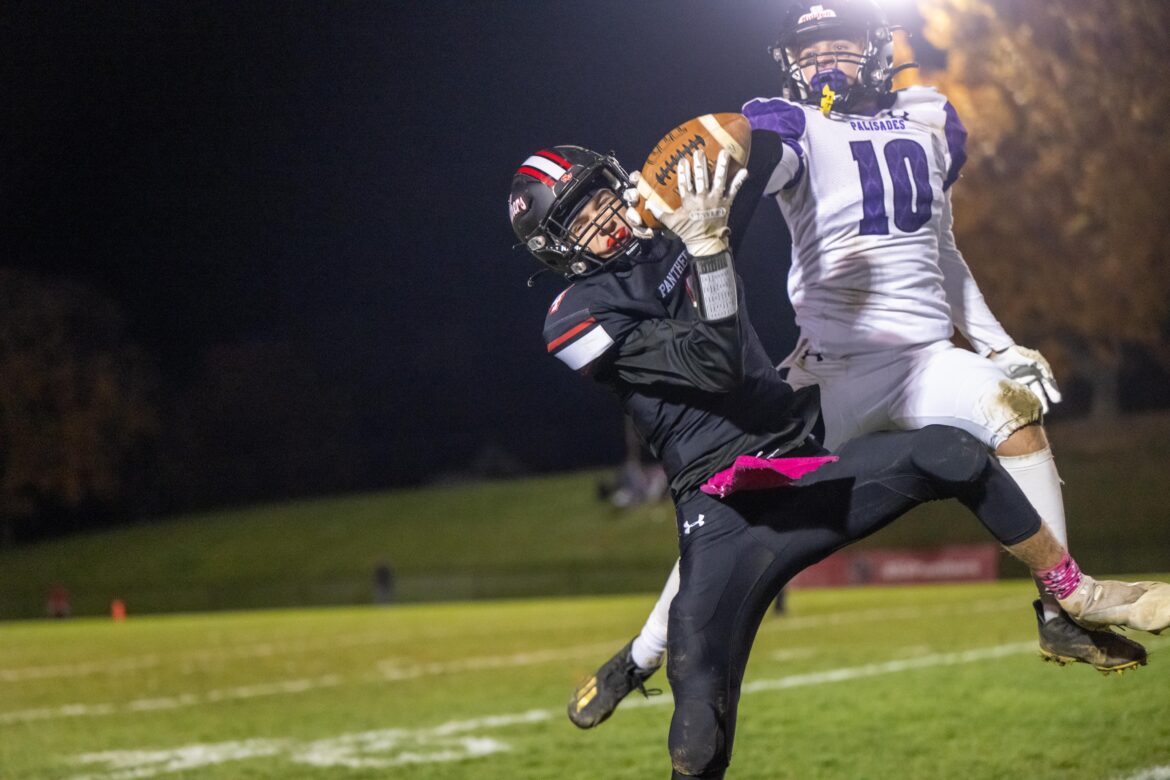 Braden Weiss secures the catch to help the Panthers move into Pirate territory.

Once again the Panthers were intent on answering.  Courtesy of a Luke Shimko scramble for a first down and a couple of completions to Braden Weiss, the Panthers found themselves facing a 4th & 1 at the Pirate 35-yardline.  Opting for a “Wildcat” attack, Saucon Valley fumbled away a low, shotgun snap that was recovered by Palisades.  The Panther scoring threat came to an end early in the fourth quarter.

The balance of the game turned into a punt-fest, but ultimately the Panther defense could not get a stop down the stretch allowing the Pirates to run out the clock.  When time ran out, Palisades was able to preserve their lead and win by a 14-7 score. 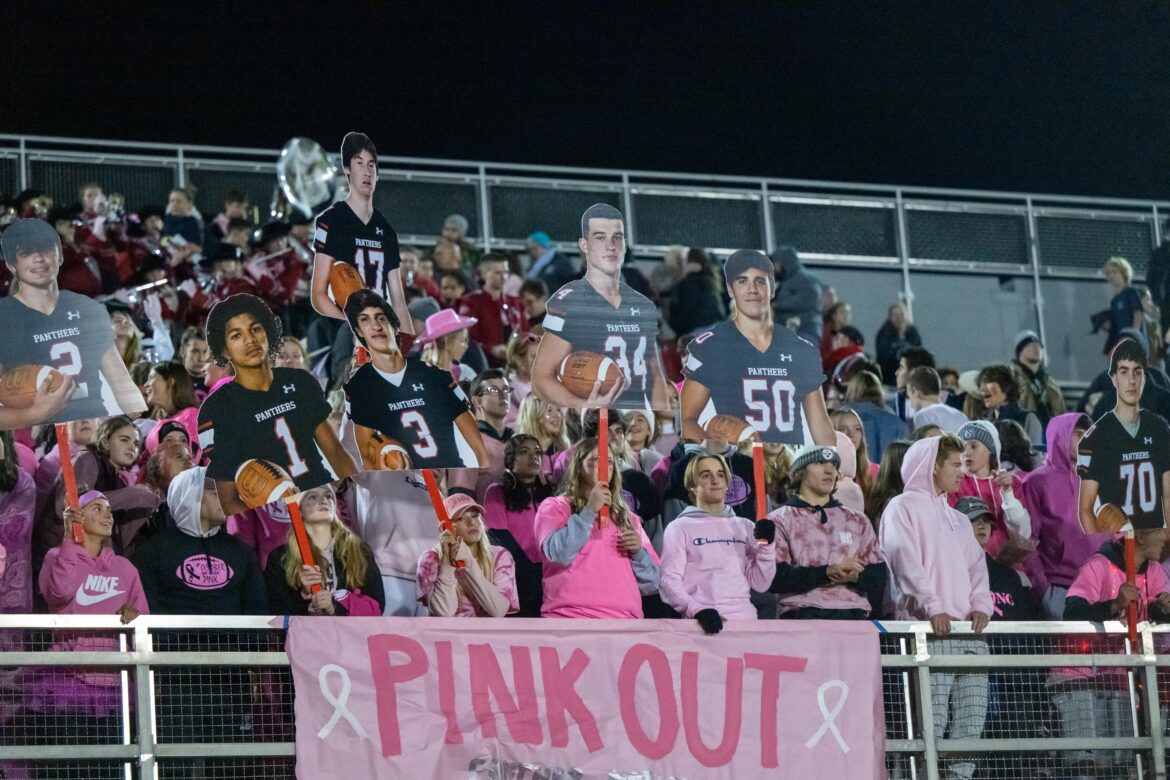 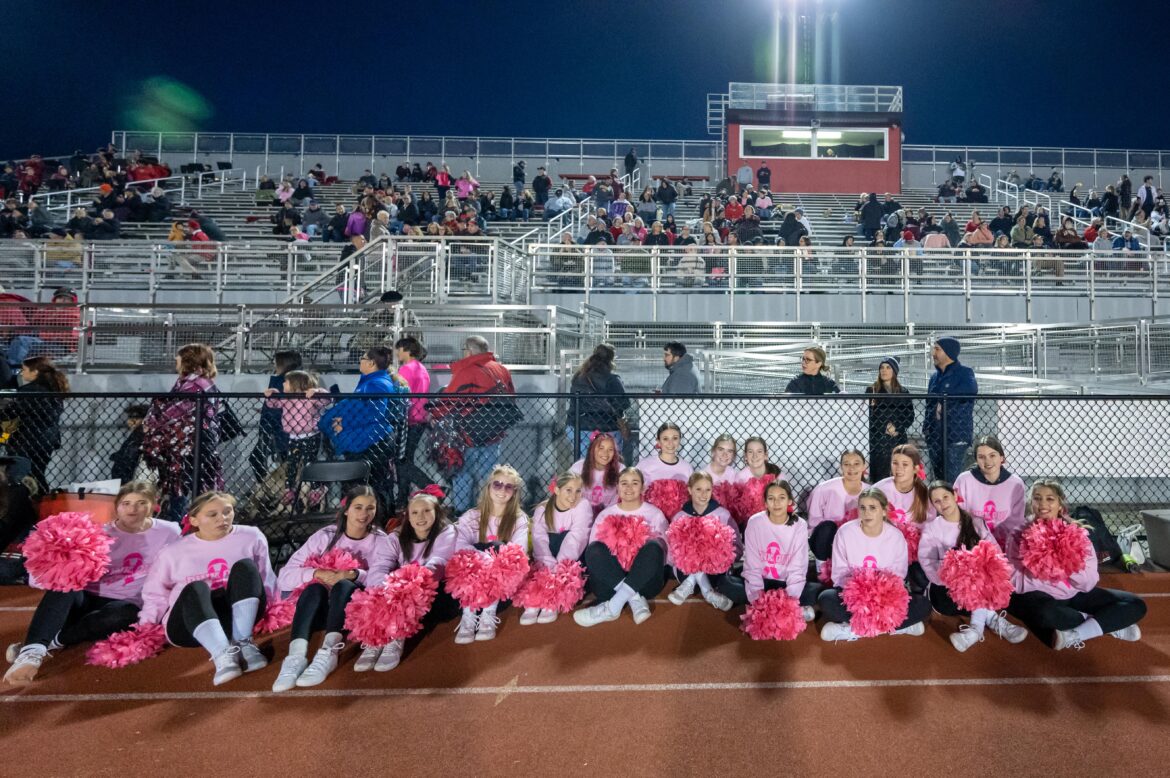 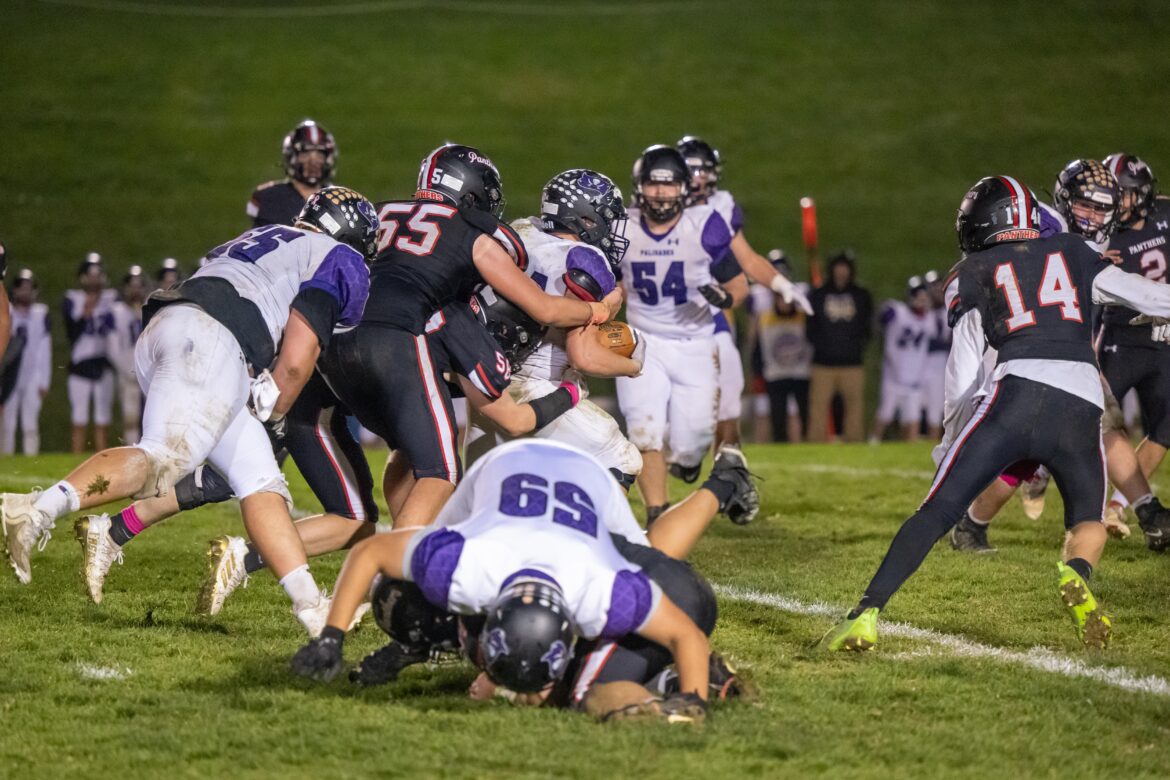 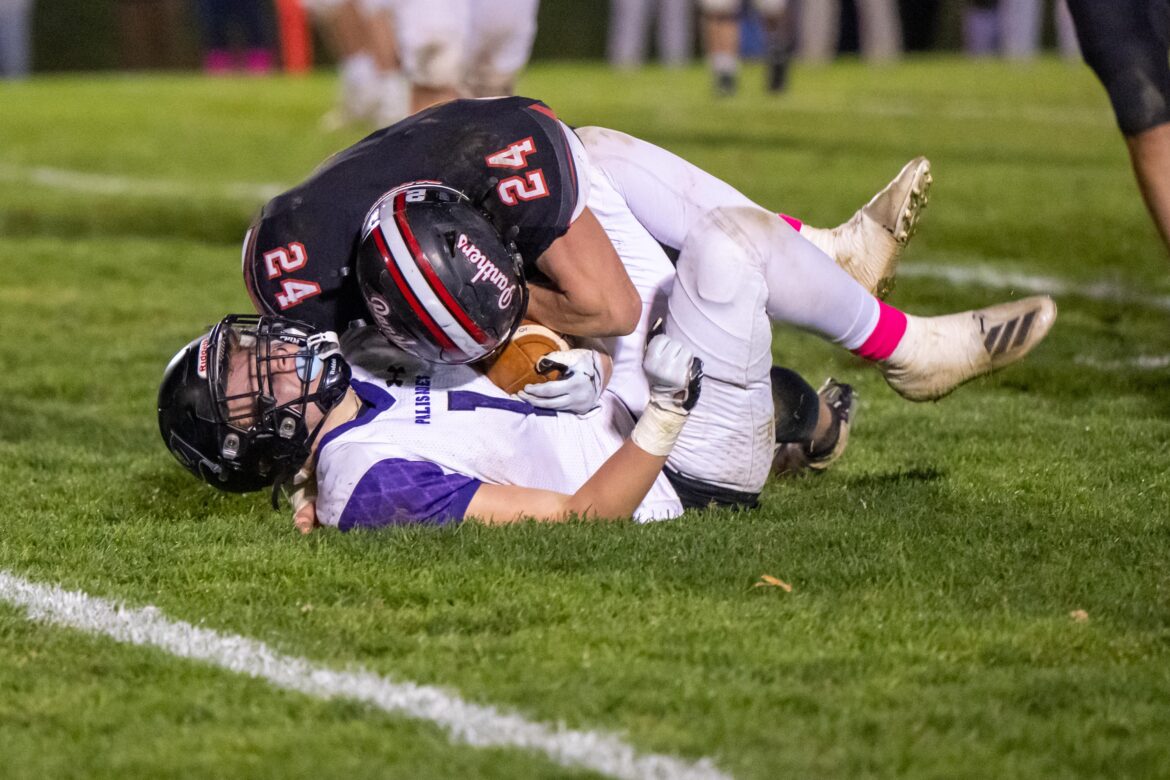 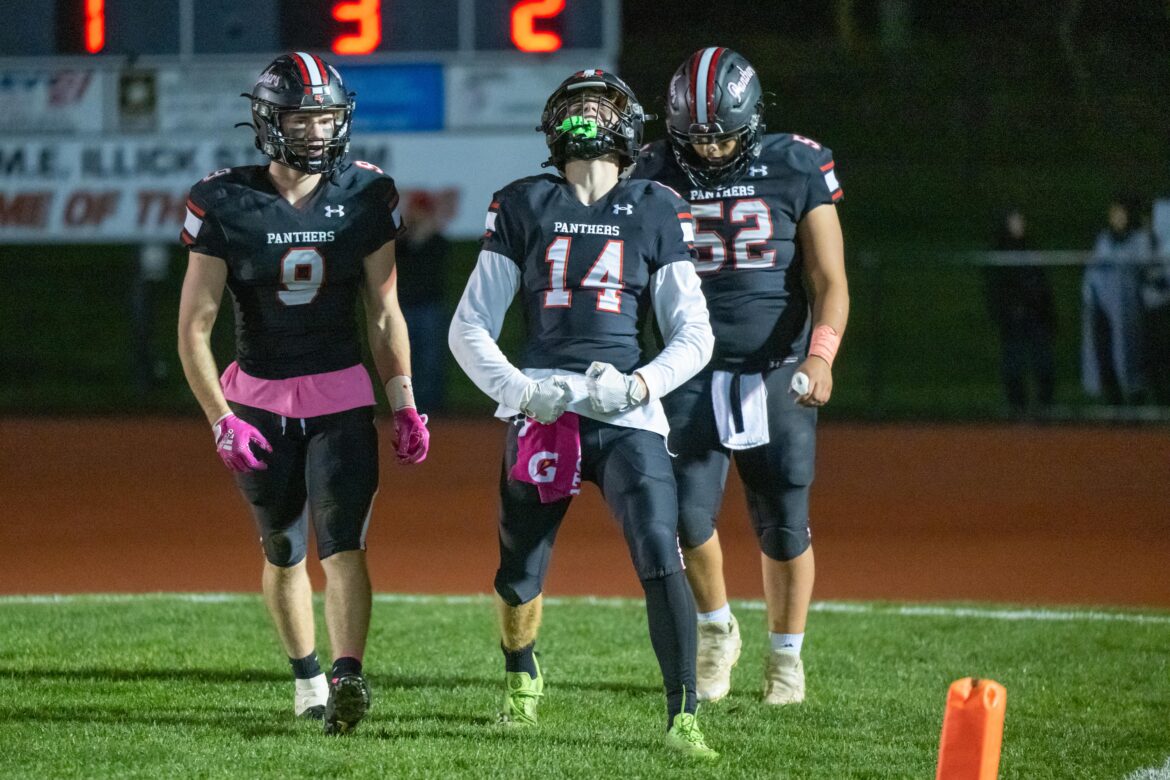 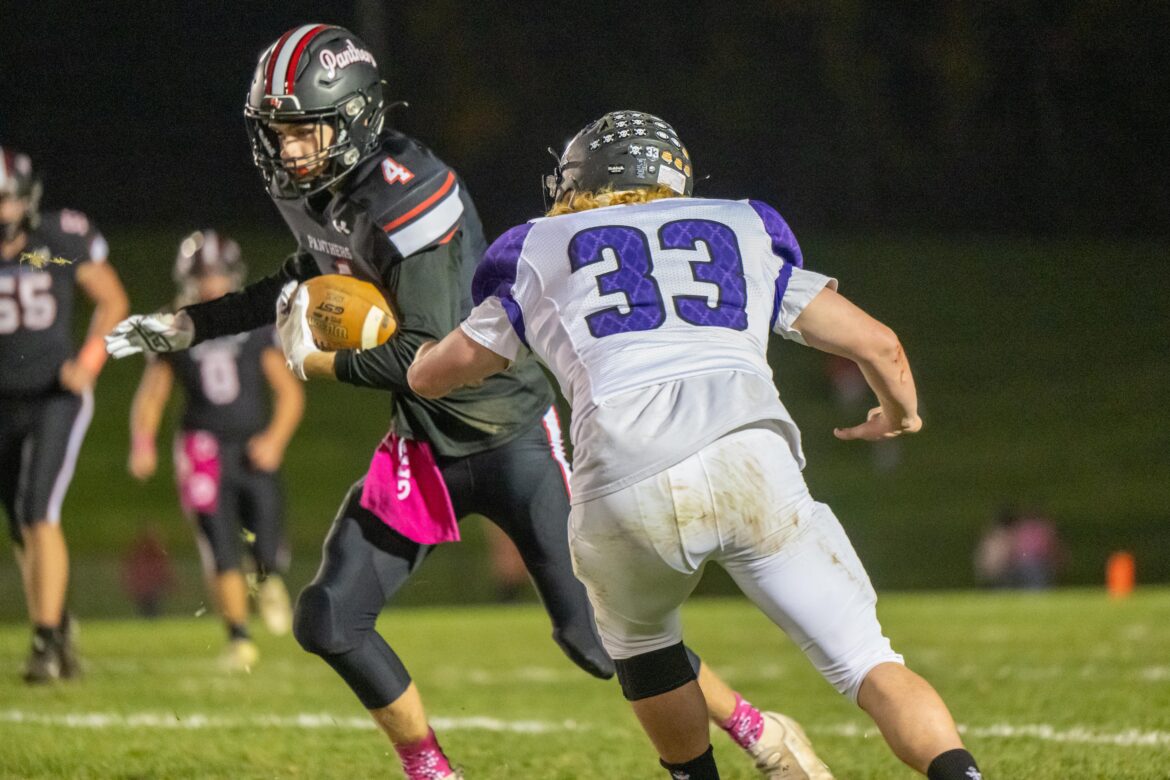 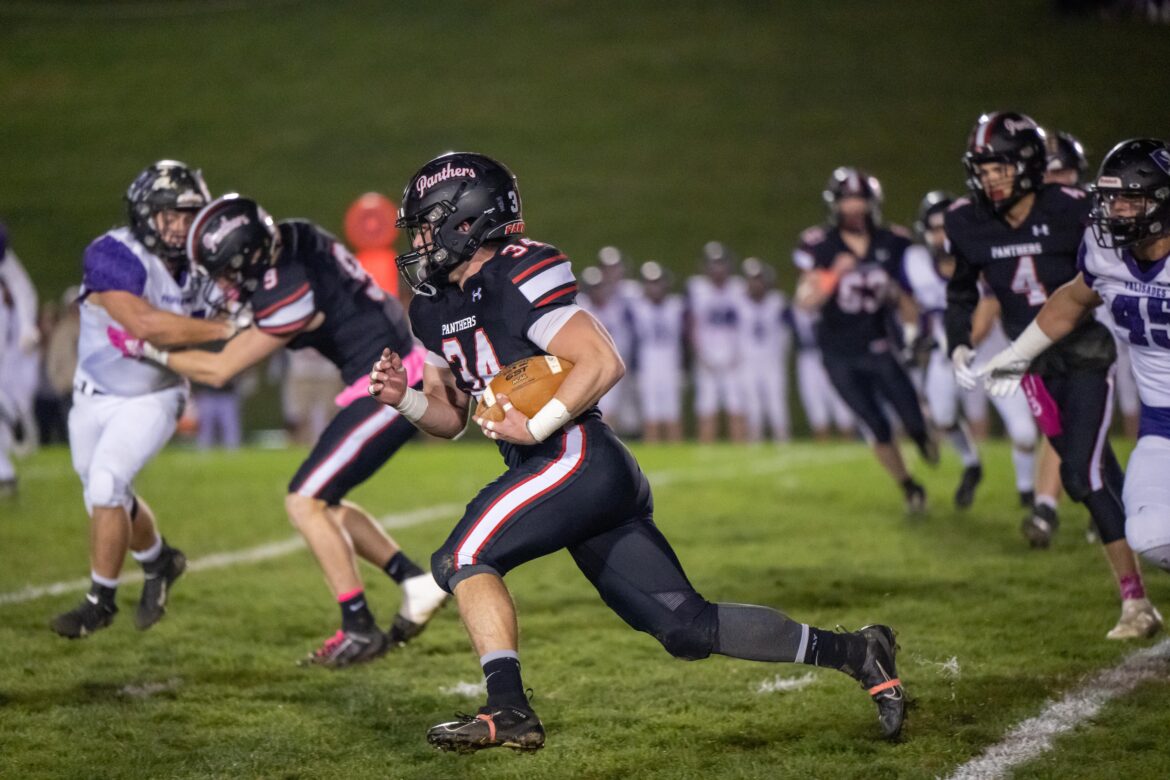 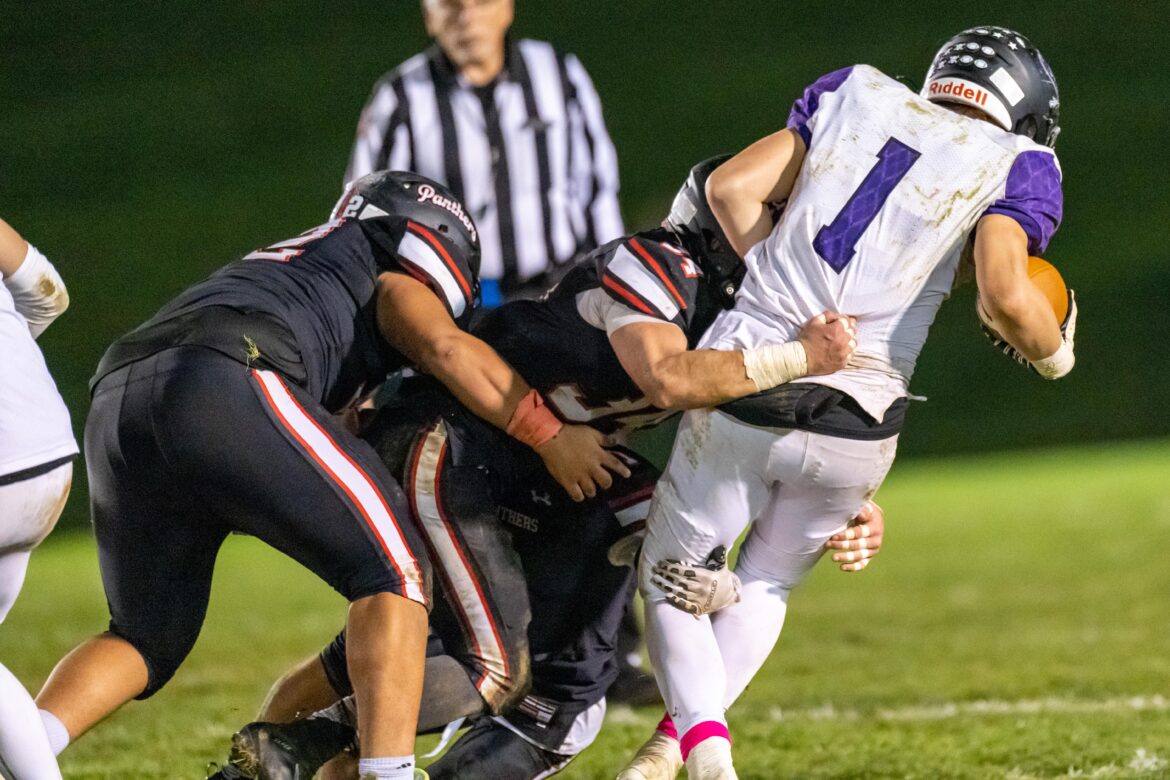 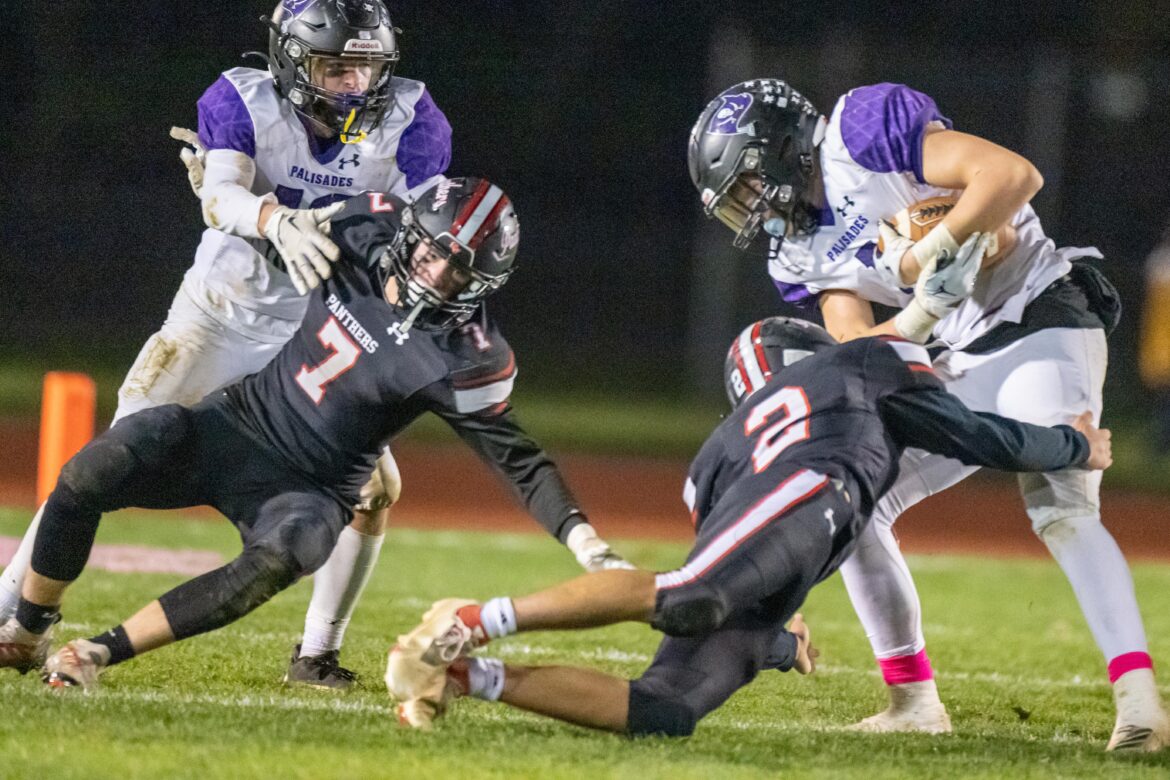 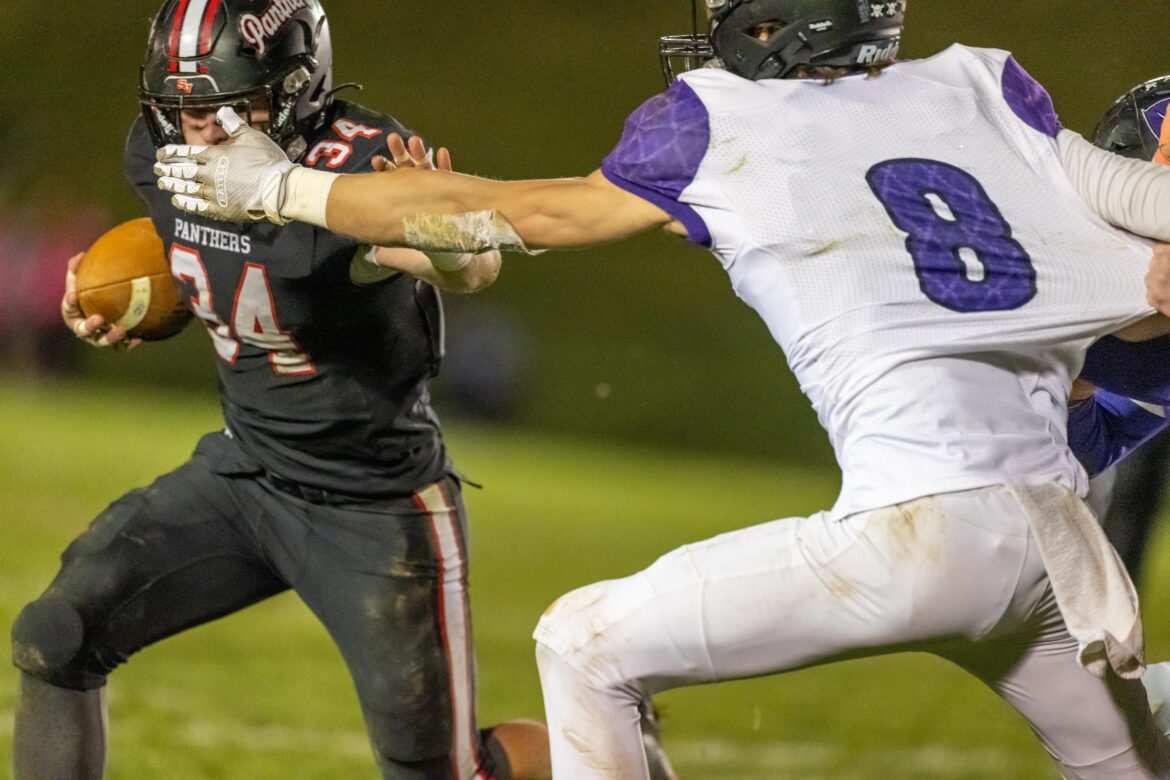 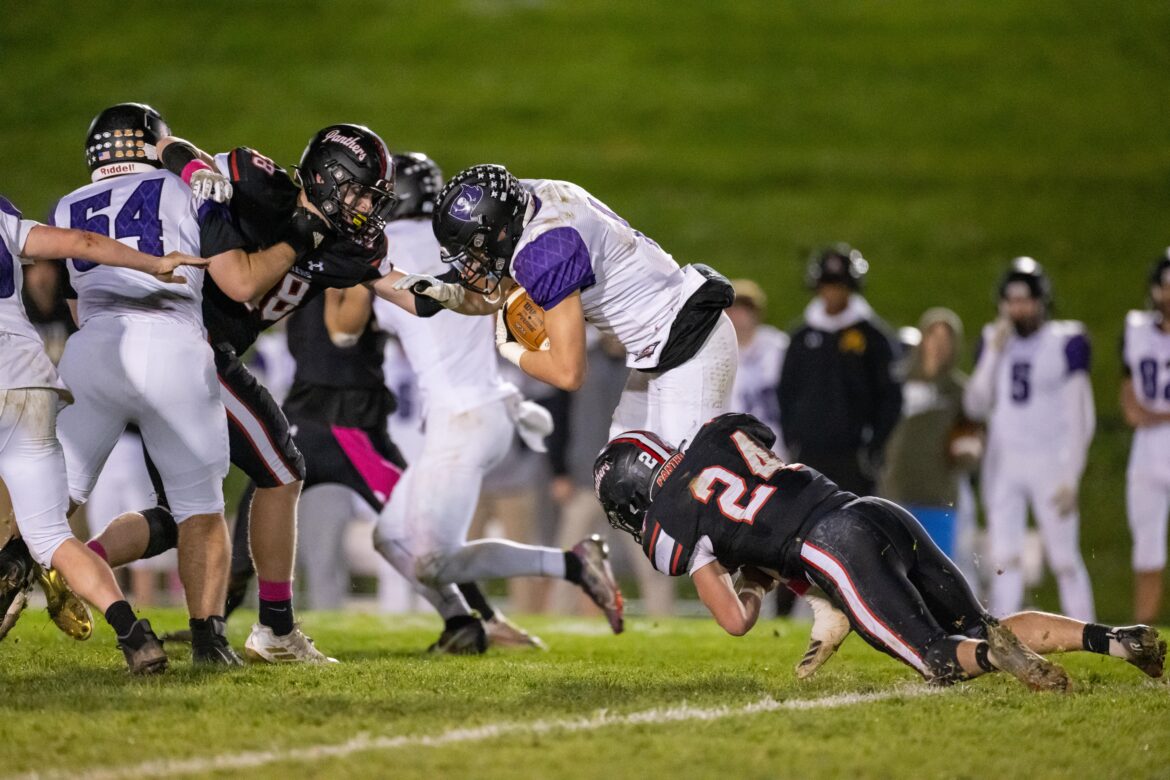 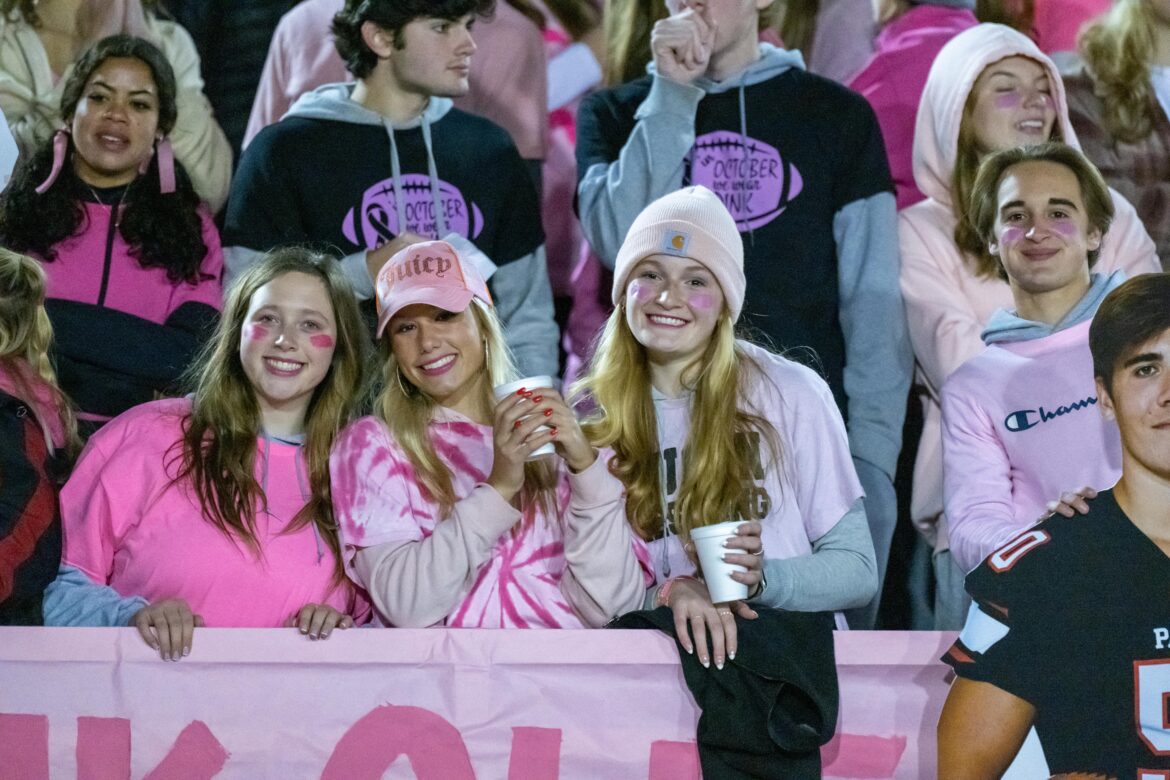 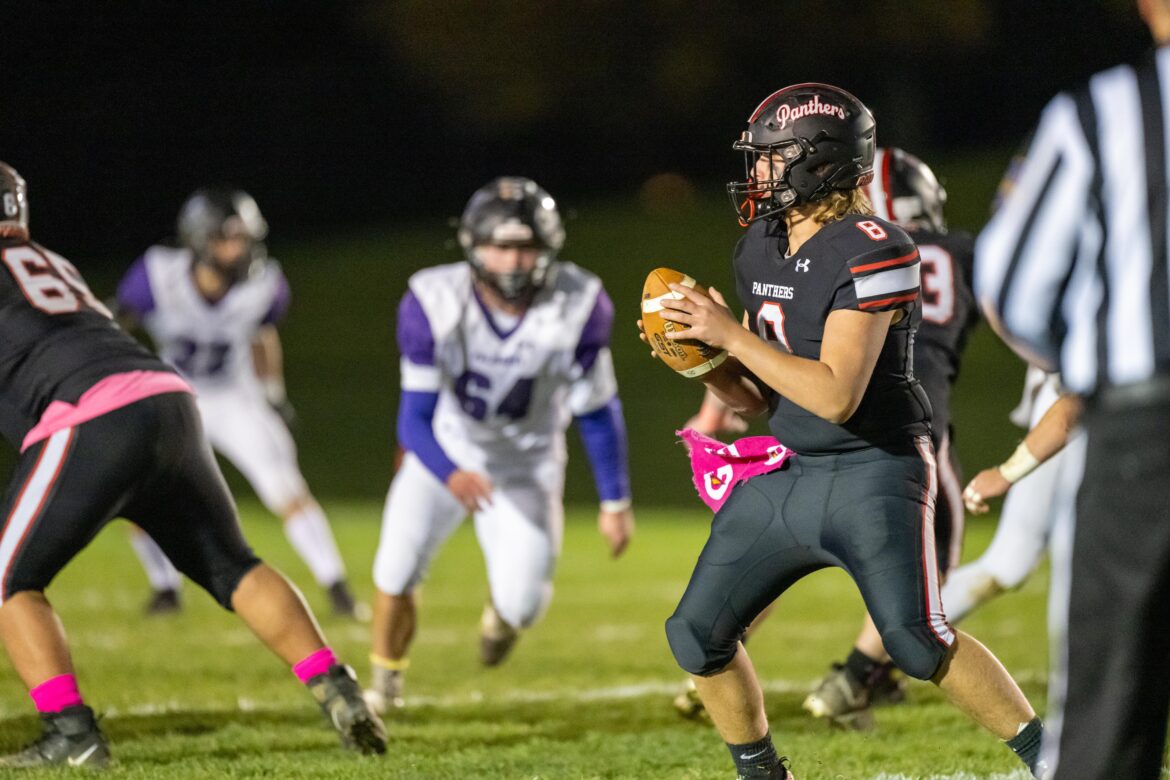 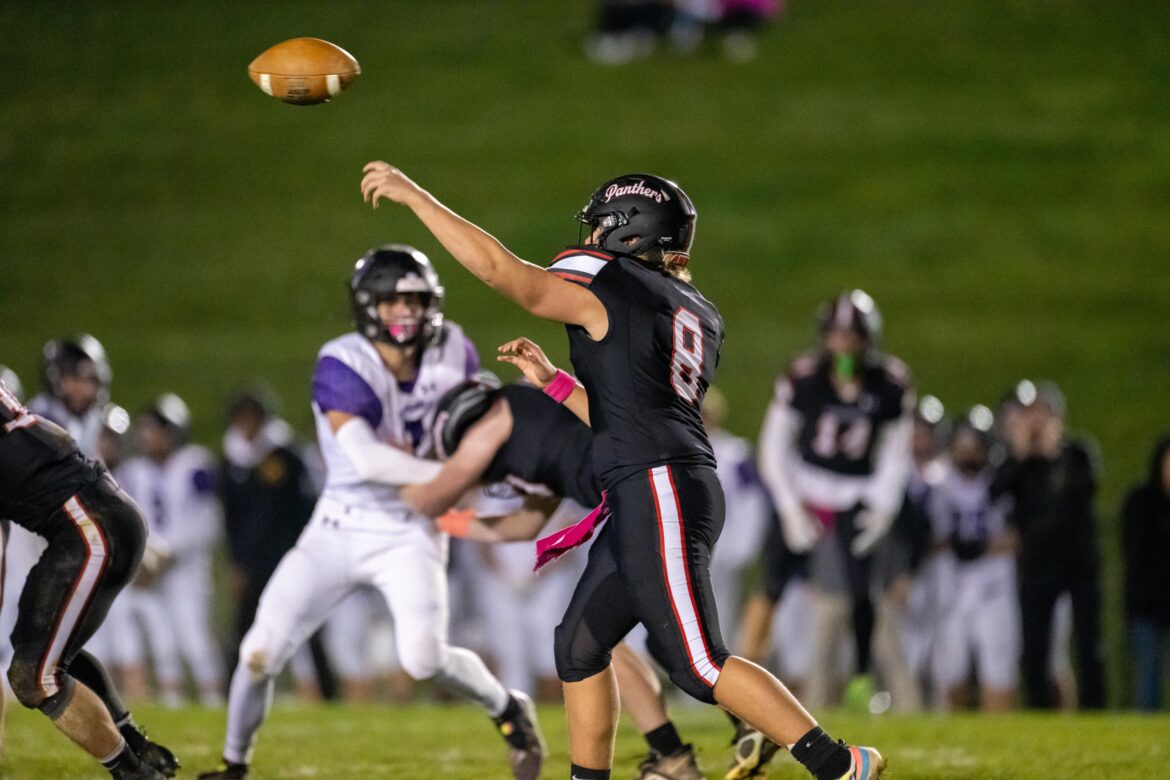 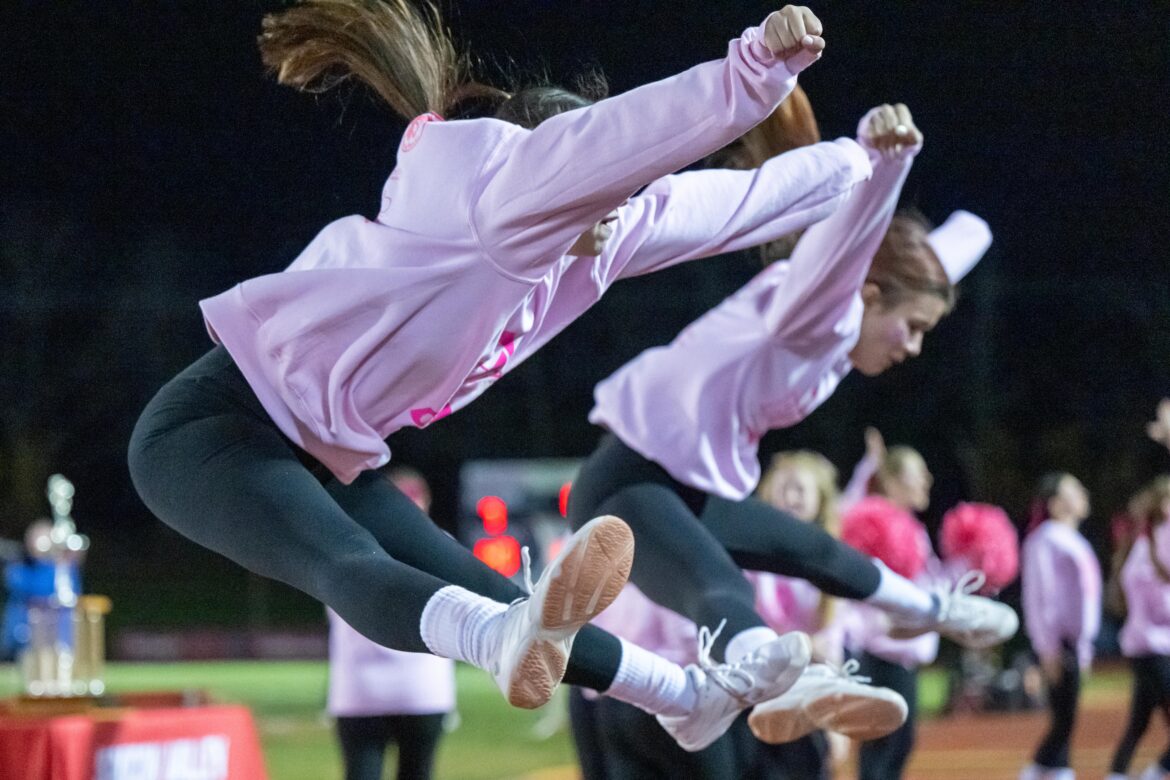 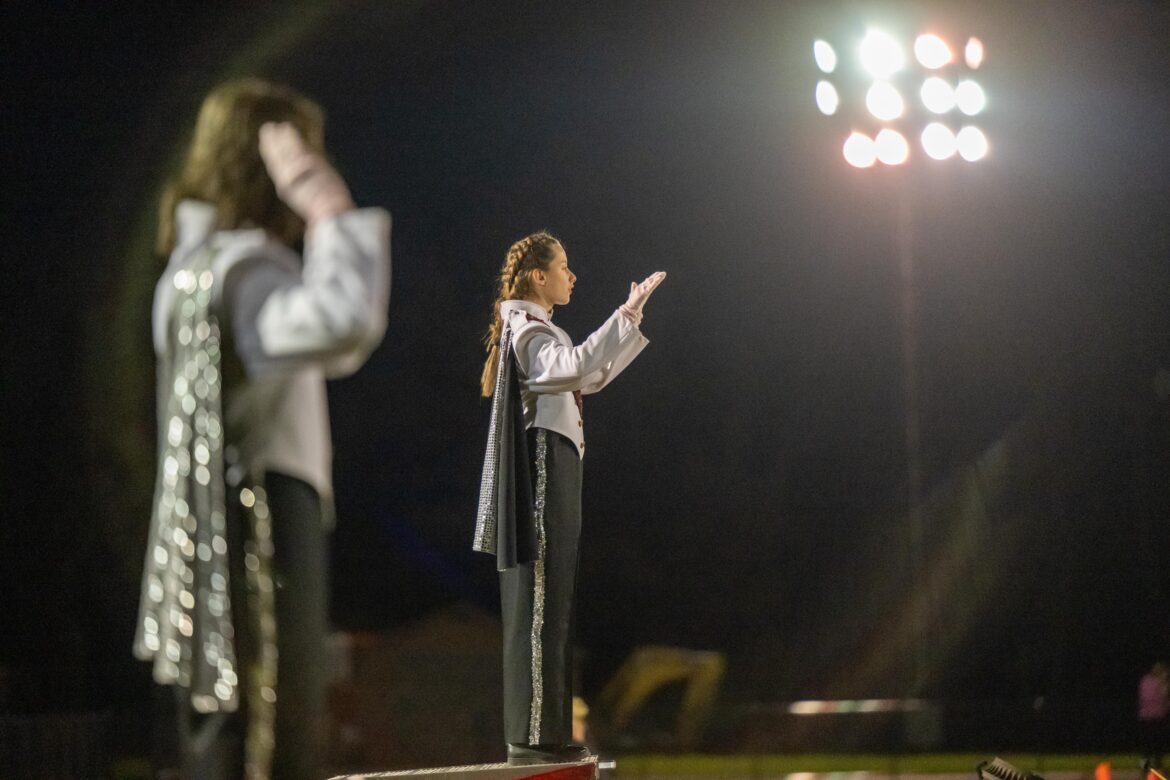 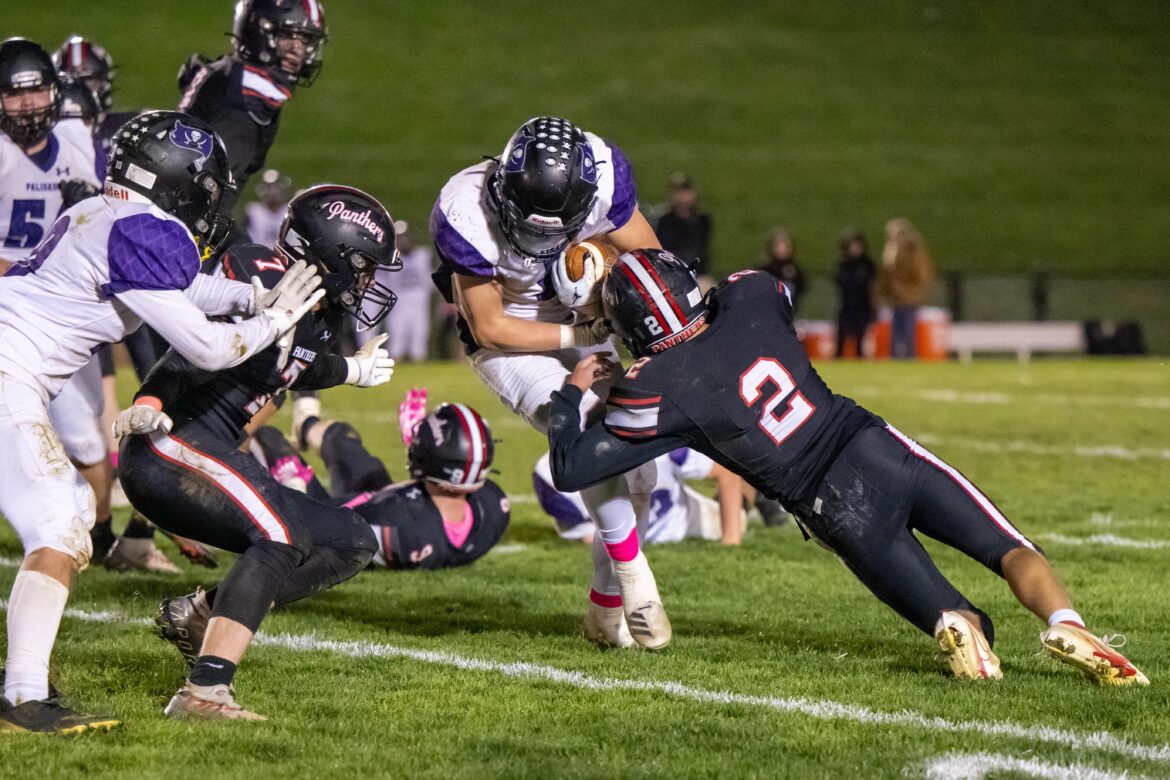 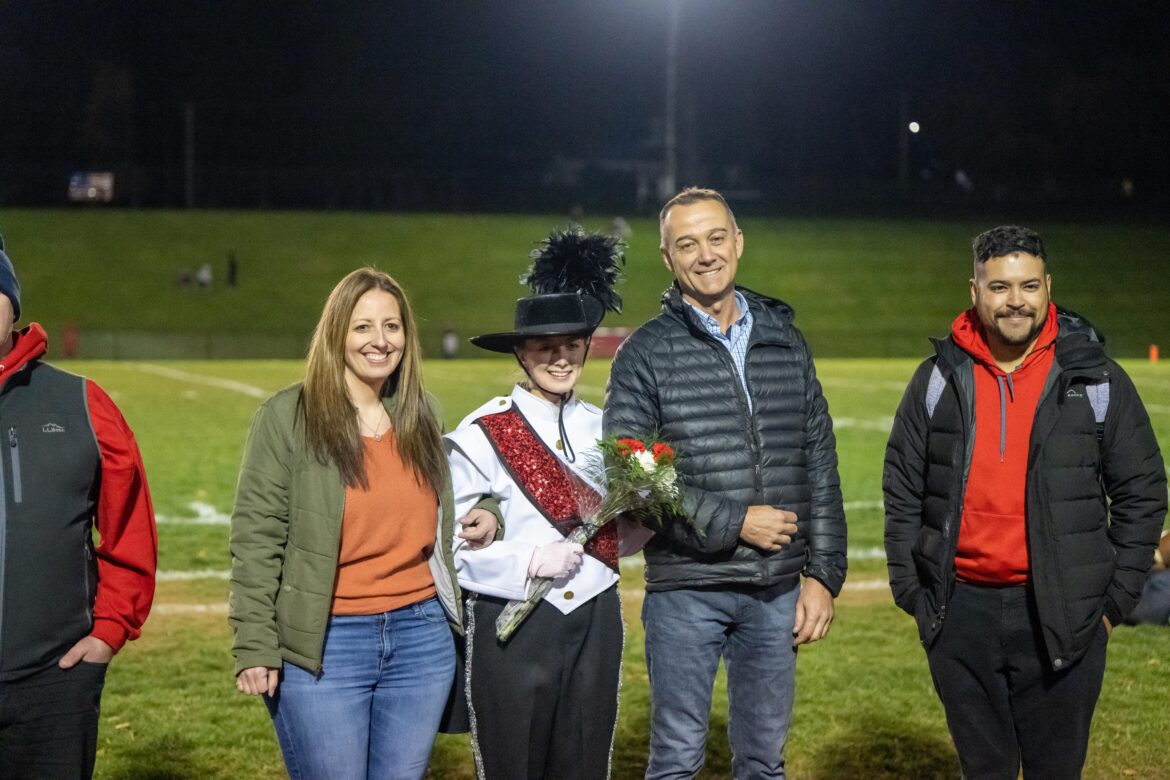 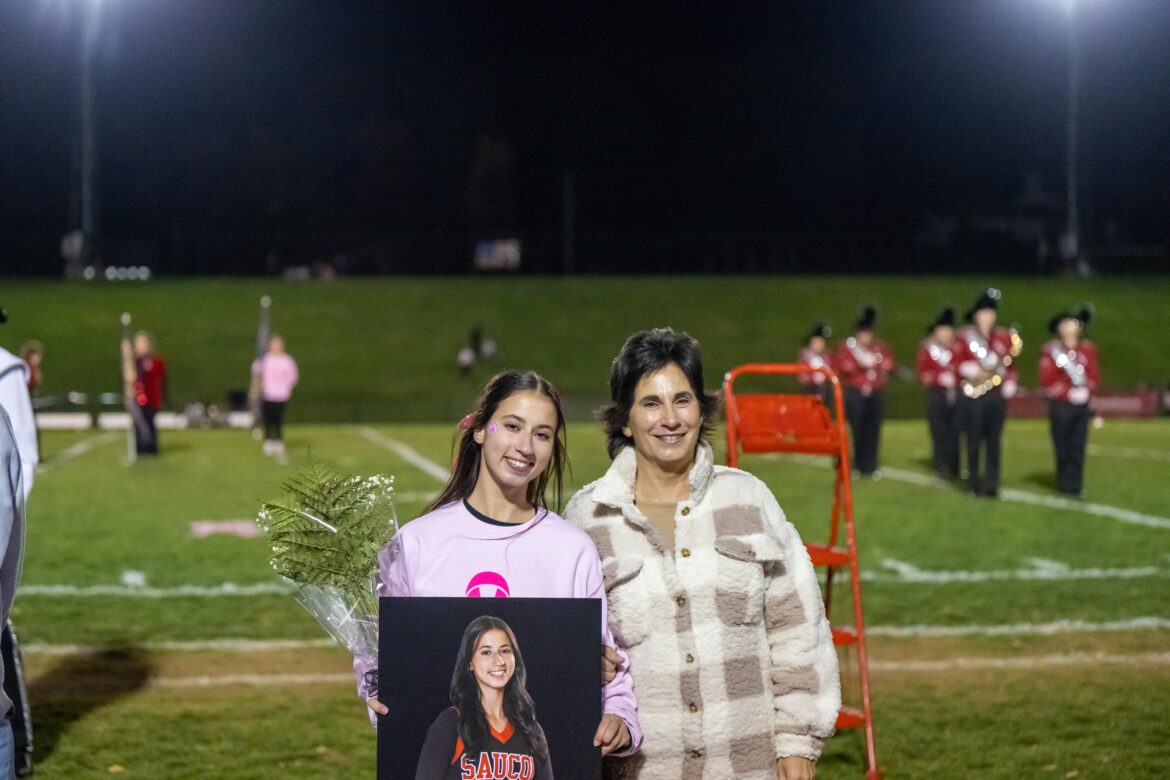 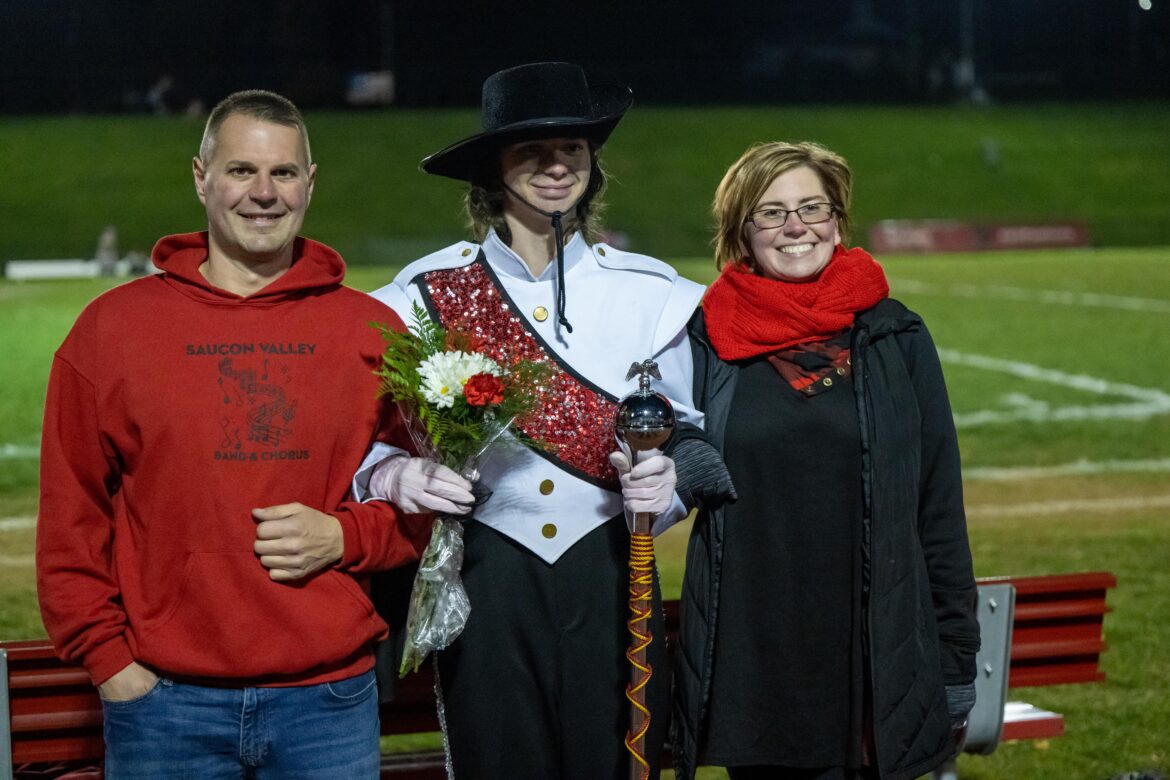