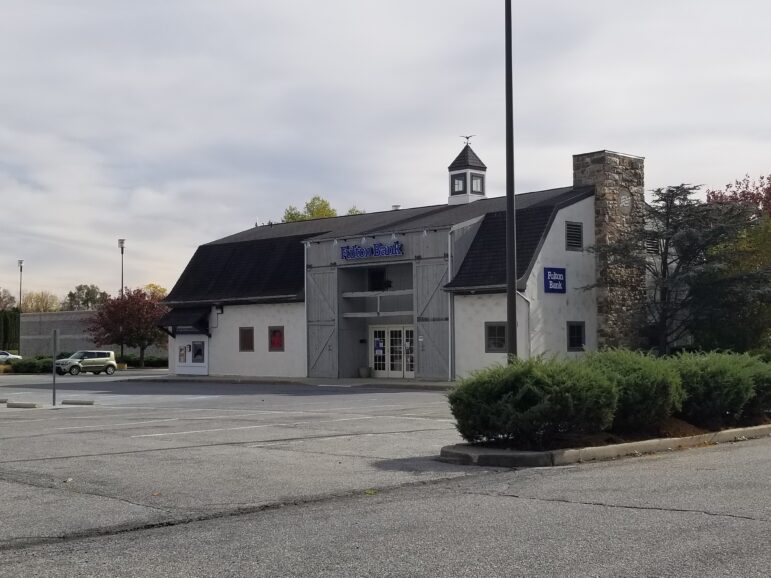 A bank branch located in the parking lot of the Saucon Valley Square shopping center could be demolished to make way for the area’s newest Sheetz. The Altoona-based convenience store chain is proposing a 6,390 square-foot convenience store-gas station to be built on the site, which is in the Saucon Valley Square parking lot on Rt. 378 in Lower Saucon Township. Township planners heard details about the proposal at their meeting Thursday night.

Just a day after Bethlehem zoning hearing board members approved a plan by Sheetz to build a combination convenience store-gas station on the city’s South Side, it was Lower Saucon Township officials’ turn to hear about a proposal for a Sheetz in the Saucon Valley Square shopping center on Rt. 378.

The proposed 6,390 square-foot store would be adjoined by six two-sided gas pumps located underneath a canopy and would be built on the north side of the shopping center driveway, where a Fulton Bank branch and part of the parking lot are currently located.

Sheetz Engineering/Permits Project Manager Steven Lyncha said the bank branch would be demolished as part of the redevelopment of the site, if plans are ultimately approved.

Like the Sheetz proposed on E. Fourth Street in South Bethlehem, if built the Sheetz in Lower Saucon Township would include a drive-thru, which Lyncha told planners is not likely to be as busy as fast food restaurant drive-thrus typically are.

He said that according to company-compiled data, 10 percent or less of sales are generated by drive-thru customers at the more than 100 stores that currently have them. That means that even during peak hours there are seldom more than two cars waiting, or “stacked,” at a time, he added.

Construction of the Sheetz would remove approximately 100 spaces from the shopping center parking lot, which would leave roughly 700 available spaces for other businesses. 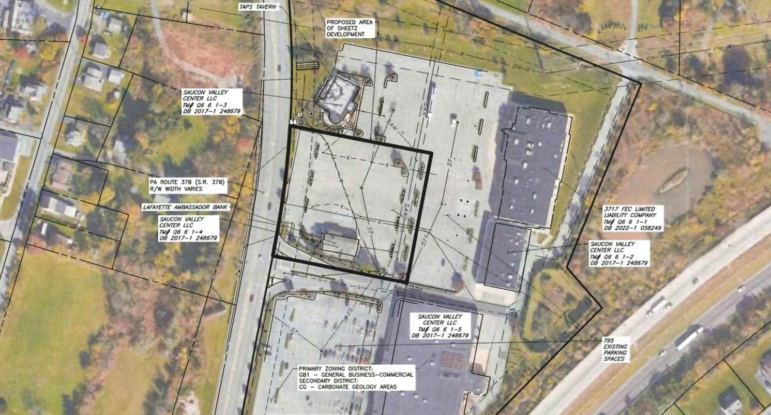 A portion of an aerial view of the Saucon Valley Square shopping center shows the area in which a proposed Sheetz gas station/convenience store would be built. The approximately 2-acre site–outlined in black–is currently occupied by a bank branch and approximately 100 parking spaces. (Credit: Sheetz Inc./Civil & Environmental Consultants Inc. sketch plan)

Planning commission solicitor Linc Treadwell commented that the Saucon Valley Square shopping center was “overbuilt on parking” when it was constructed in the 1990s.

In recent years, a number of the shopping center’s units have been vacant, including the anchor unit that previously housed the Revolutions bowling-dining-entertainment venue.

Lyncha said the shopping center driveway is capable of handling a high volume of traffic because of the traffic light at its intersection with Rt. 378, so there should be no issues with traffic backing up into or out of the driveway if the current plans are approved.

Treadwell asked if there is any potential leeway on decisions about the architecture and color scheme for the new store, however Lyncha said they typically don’t have leeway.

He added that newer stores have a “truss-style canopy” as opposed to an earlier style.

All of the lighting at the store would be LED, downcast lighting to eliminate glare, he said, and there would likely be a freestanding Sheetz sign built close to Rt. 378.

One issue that was raised by township zoners concerns the karst geology under the site of the proposed gas station, which would be built with underground gasoline storage tanks.

However, Lyncha said the company has built other gas stations with underground storage tanks in geologically similar areas without issue.

Lyncha said the appearance of such tanks and the fact that they would require secondary containment are why Sheetz prefers to use underground tanks.

Planning commission chair John Noble said that he approved of the overall concept of the proposal but expressed concern about stormwater containment; especially, he said, because of the shopping center’s location uphill from the nearby Black River. 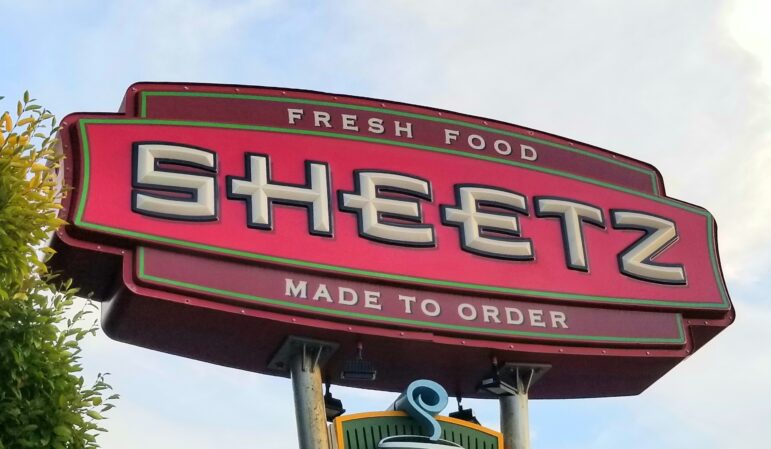 A Sheetz is proposed for the Saucon Valley Square shopping center on Rt. 378 in Lower Saucon Township. Pictured above is the sign outside the Sheetz on Schoenersville Road in Bethlehem, which is one of a number of stores in the area.

In response to another question from the commission, Lyncha said the company plans to obtain a liquor license in order to sell beer at the Rt. 378 store; something that has become a common practice by convenience store chains, including a major competitor.

Two nearby Rt. 378 gas stations–Exxon and Speedway–have smaller convenience stores attached to them that could be impacted by the competition, as could a locally-owned beer distributor located in the shopping center, commissioners noted.

In order to sell alcoholic beverages in Pennsylvania, the state liquor law requires that convenience and grocery stores sell food and be built with indoor seating areas. Lyncha said the Lower Saucon Sheetz would have both indoor and outdoor seating areas.

When asked about the company’s timeline for building the store, Lyncha said that in general he likes to say their timetable is “as quick as possible.”

However, when Saucon Source asked for more specific information about the timetable following the meeting, he declined to comment.

A sketch plan for the proposed Sheetz prepared by a local engineering firm may be found on pp. 91-94 of the accompanying documents included with Thursday’s meeting agenda online and identifies the roughly 2-acre section of the property on which it would be built, which Lyncha said already has the necessary utilities on-site.

Other Sheetz gas station-convenience stores in the area are located in Bethlehem, Whitehall, Upper Macungie Township and Palmer Township, which is home to two stores.

Adjacent to where the Lower Saucon Township Sheetz would be built, a Mexican restaurant chain–Plaza Azteca–plans to open an eatery inside a former sports pub.