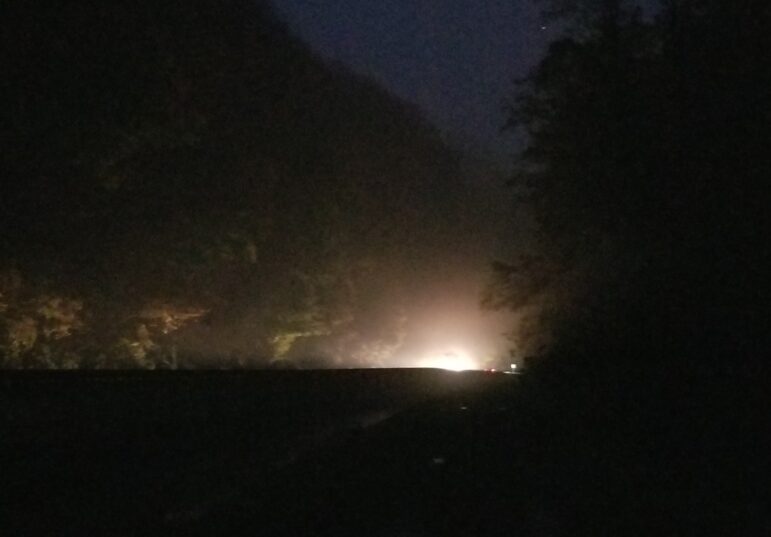 Pennsylvania State Police at Dublin say that as a driver approached an icy downhill grade on Rt. 32 (River Road) in Nockamixon Township south of Kintnersville Saturday morning, he lost control of his vehicle and went off the road before hitting an embankment and overturning. In spite of the severity of the crash, police said neither the driver nor his passenger were injured in it. Above: A vehicle travels south on Rt. 32 in the general area of the crash earlier this month. (FILE PHOTO)

A weekend accident along River Road (Rt. 32) in Nockamixon Township, Bucks County, occurred as a result of ice and the speed at which the driver was allegedly traveling, Pennsylvania State Police at Dublin said Monday.

In an accident report, troopers said the crash happened at 9:52 a.m. Saturday about three-tenths of a mile south of the intersection of Rt. 32 and Rt. 611 in Kintnersville.

That area is not far from the Delaware River, the D&L Canal and the Nockamixon Cliffs.

As a southbound Ford Focus operated by a 26-year-old Bethlehem man approached a downhill grade police said it was “traveling too fast for the icy conditions of the roadway.”

As a result, police said, the driver “lost control of the vehicle at the crest of the hill prior to the downhill grade” and slid off the right side of the road.

According to the crash report, the vehicle then struck an embankment and “overturned completely, landing on its back tires, while rotating approximately 180 degrees.”

Neither the driver nor his 27-year-old female passenger–who was also listed as being from Bethlehem–were injured in the crash, according to police, who noted in the report that both were wearing seat belts at the time.

The car was towed from the scene and the operator will receive a citation for speeding, police said.