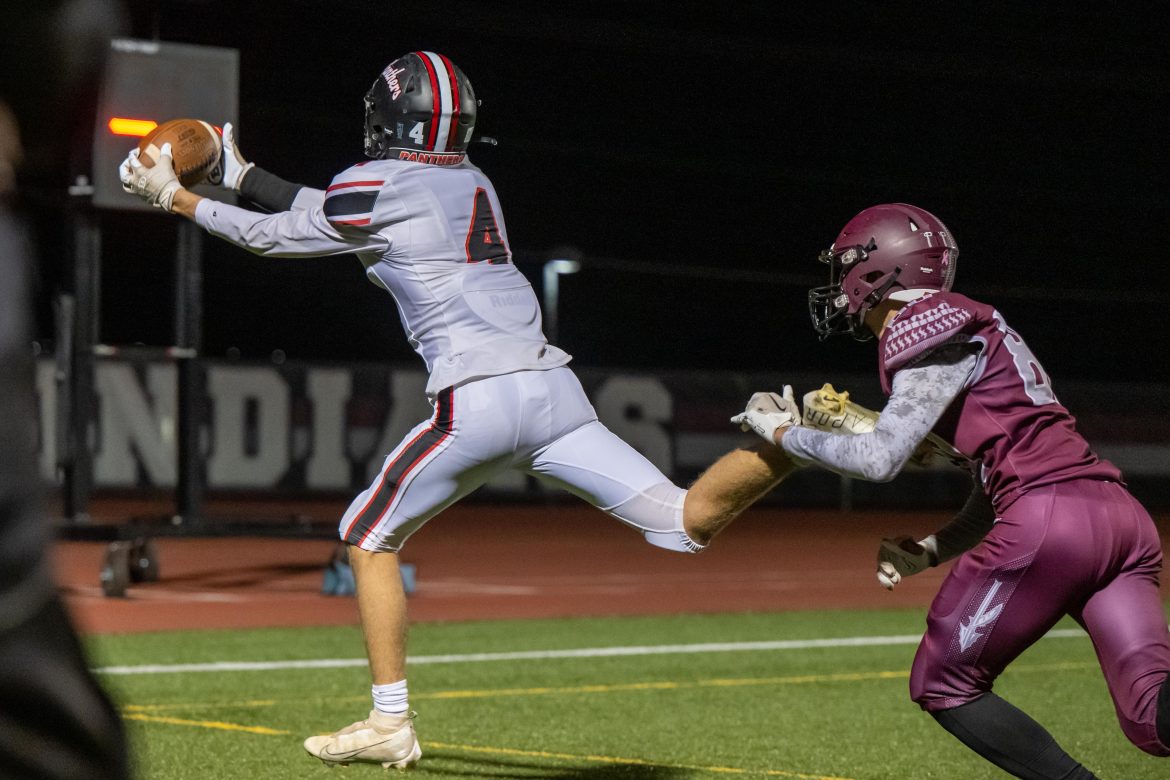 Saucon Valley’s Braden Weiss (4) take it all in stride!

On Friday night Saucon Valley traveled to Lehighton looking to capitalize on their homecoming victory from a week ago.  The Panthers were hoping a win at Lehighton’s homecoming would enhance their District XI playoff chances.  Last year, the Panthers defeated the Indians 20-14.

On a chilled night in Lehighton it did not take very long for the scoreboard to heat up.  In only three plays, the Indians completed a 65-yard drive when running back Ethan Buchert found a little cutback lane against the Panther defense.  Buchert raced 43-yard for his touchdown.  In only sixty-two seconds Lehighton led the Panthers 7-0. 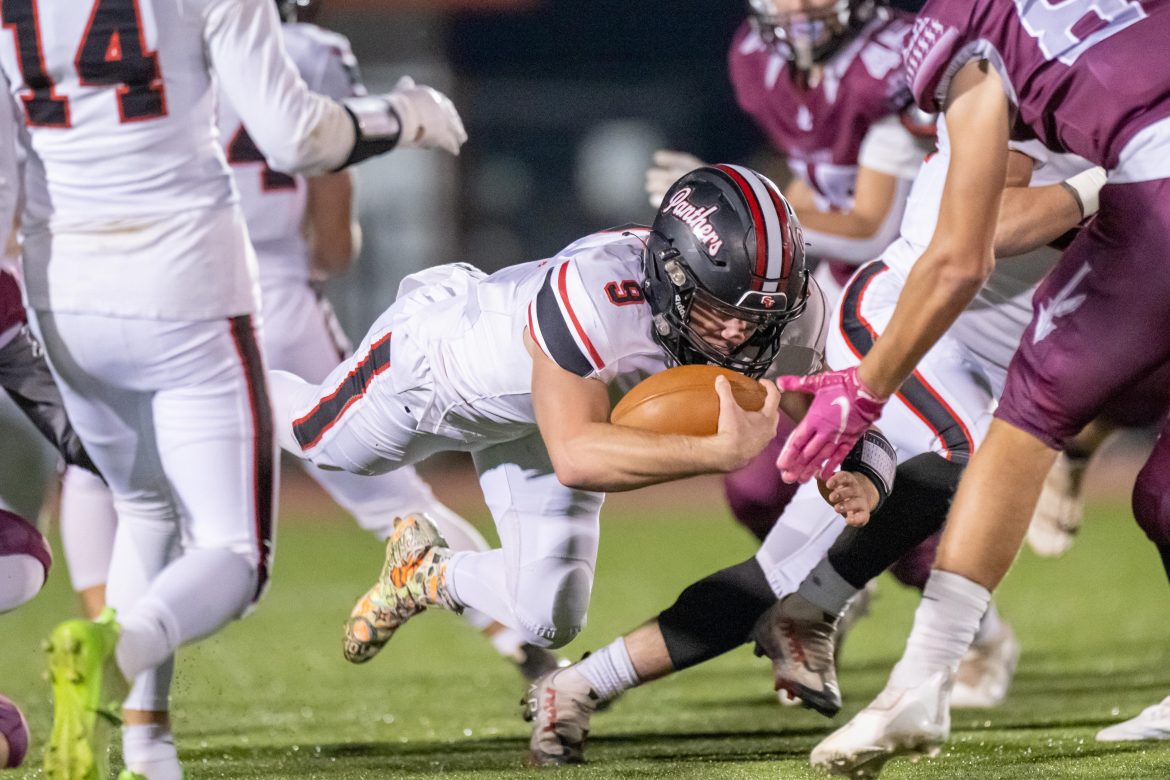 The Panthers looked dangerous on their first drive with a new “Wildcat” look that featured Jared Rohn as the primary ball-carrier.  On the opening drive Rohn carried four consecutive times for a total of forty-six yards.  However, on 2nd & 6 from the Indian 21-yardline an errant shotgun snap sailed over Rohn’s head for a 14-yard loss.  The miscue proved to be too much for the Panther offense to overcome.  Saucon turned the ball over on downs at the 27-yardline.  The silver lining was that Lehighton gave the ball right back after a three-and-out punt.

Saucon Valley’s Tyler Pfizenmayer pounded the ball to pick up a first down, but the Panther drive quickly fizzled after only four plays and they punted right back to the Indians. 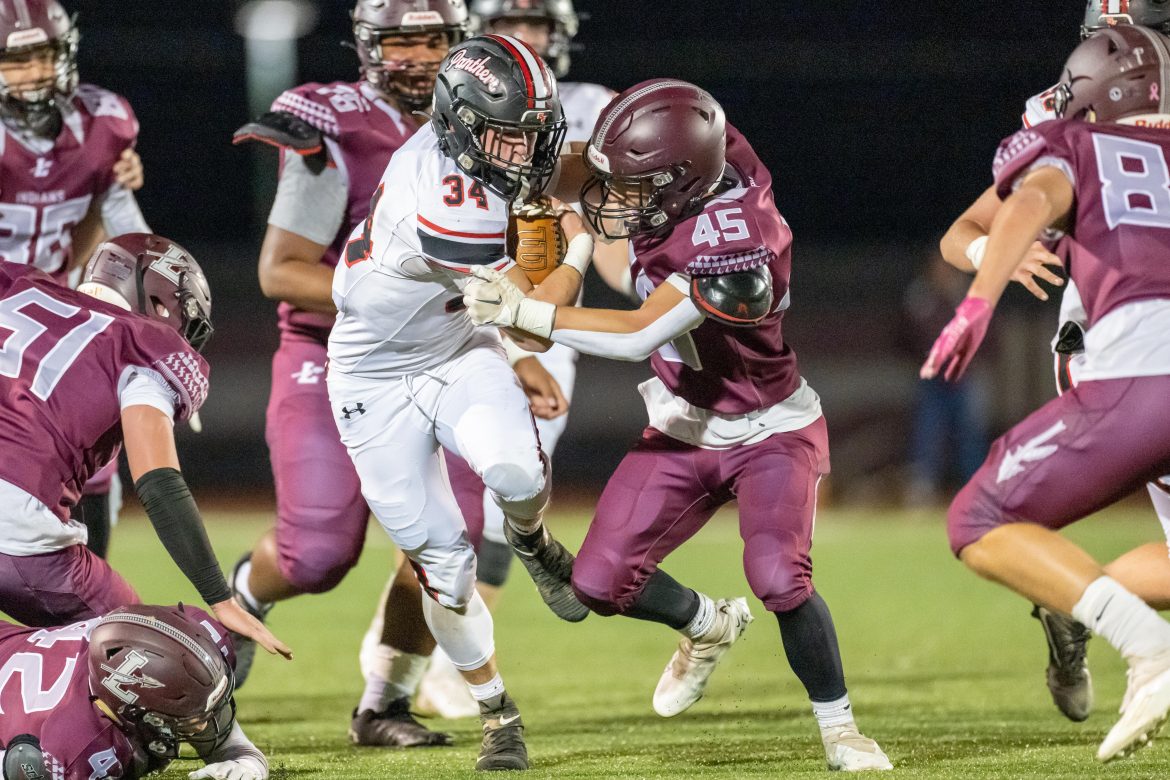 Tyler Pfizenmayer (34) pounding the rock against the Lehighton Indians.

After a very quick start the scoreboard cooled down until midway through the second quarter.  Lehighton manufactured an 8-play drive that was good for 46-yards and a touchdown.  This time Lehighton quarterback Brady O’Donnell hit paydirt from four yards away on a “Q-counter”.  O’Donnell faked Jet-Sweep to his motion-man and followed his pulling linemen into the end zone.  The PAT was good and with 2:17 left in the first-half Saucon Valley trailed 14-0.

With short time until intermission, the Panthers battled back.  Starting from their own 35-yardline, Saucon mixed a little run with a few big passes.  First, quarterback Luke Shimko moved the Panthers to midfield when he hit Jared Rohn over the middle for a 23-yard pickup.   Then, Shimko went back to Rohn on a little swing pass that was good for another fifteen yards.  Finally, on 4th & 7 from the Indian 24-yardline with only :18 seconds remaining in the half,  Shimko dropped an absolute dime when he hit Braden Weiss in full stride in the back of the Indian end zone for the score.  Braden Schriffert converted the extra-point and the Panthers clawed back to a 14-7 deficit. 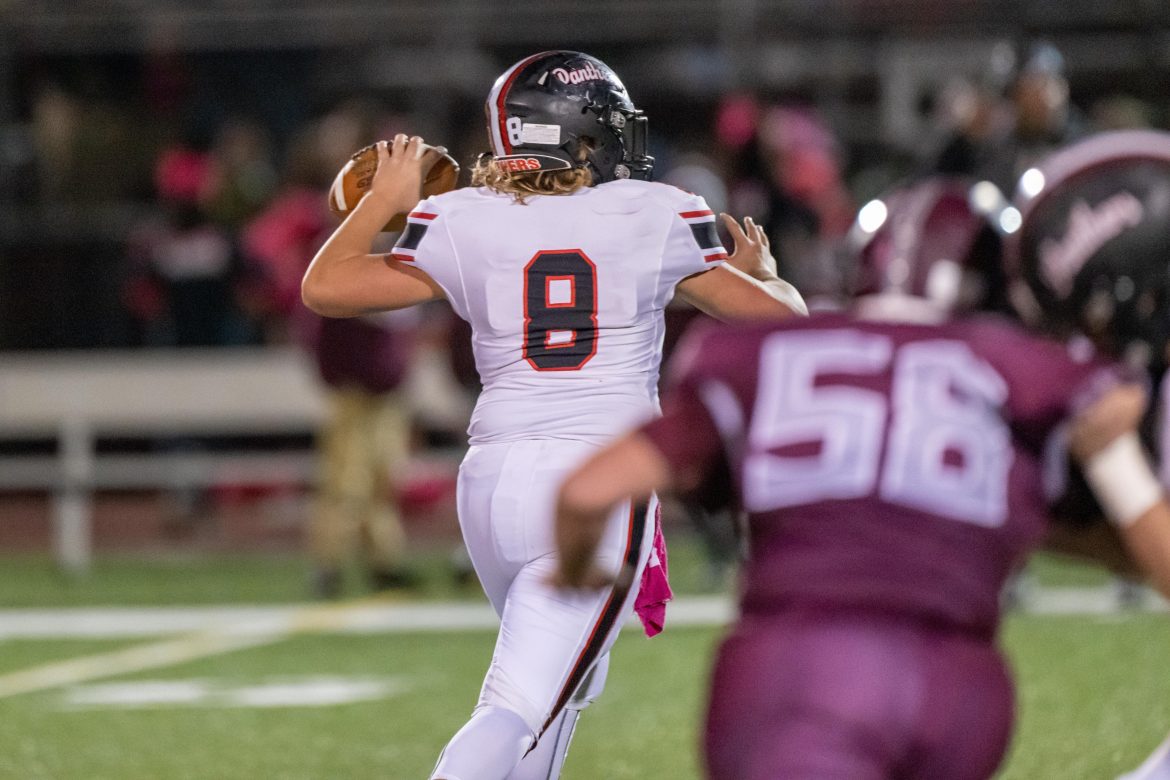 Neither team really threatened throughout the third period of play until Lehighton put together an eight play drive that carried into the fourth quarter.  The Indians covered 52-yards but had to settle for a 21-yard field goal after the Panther defense stiffened.  With 10:56 left to play in the game, Lehighton extended to a 17-7 lead.

On its final two possessions, the Saucon Valley offense could not find a rhythm.  Ultimately, being down by two scores, the Panthers were forced to try and convert a fourth down deep in their own territory with the clock as their enemy.  Saucon came away empty allowing the Indians to add a late touchdown.  When it was all said and done Lehighton defeated Saucon by a score of 24-7. 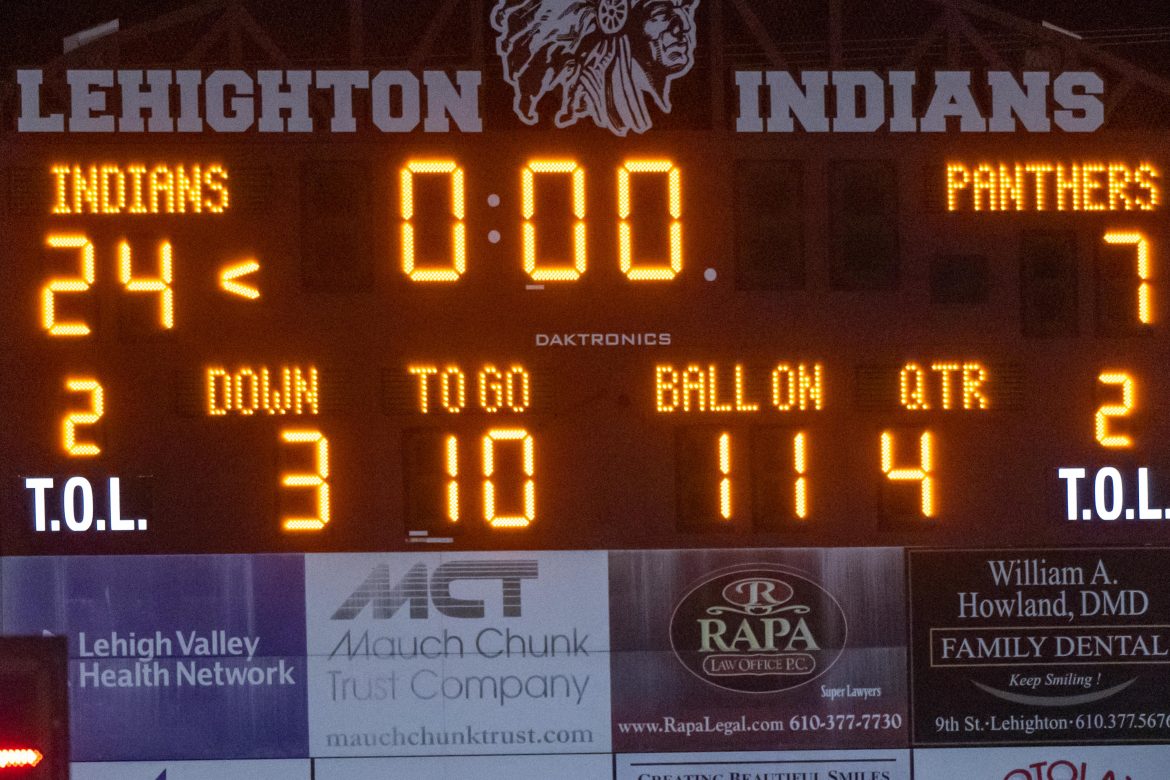 UP NEXT:  It’s Rivalry-Week!  The Panthers (3-6) will host the Palisades Pirates (7-2) in the regular season finale.  Kickoff at Hellertown’s Montford E. Illick Stadium is scheduled for 7 p.m. 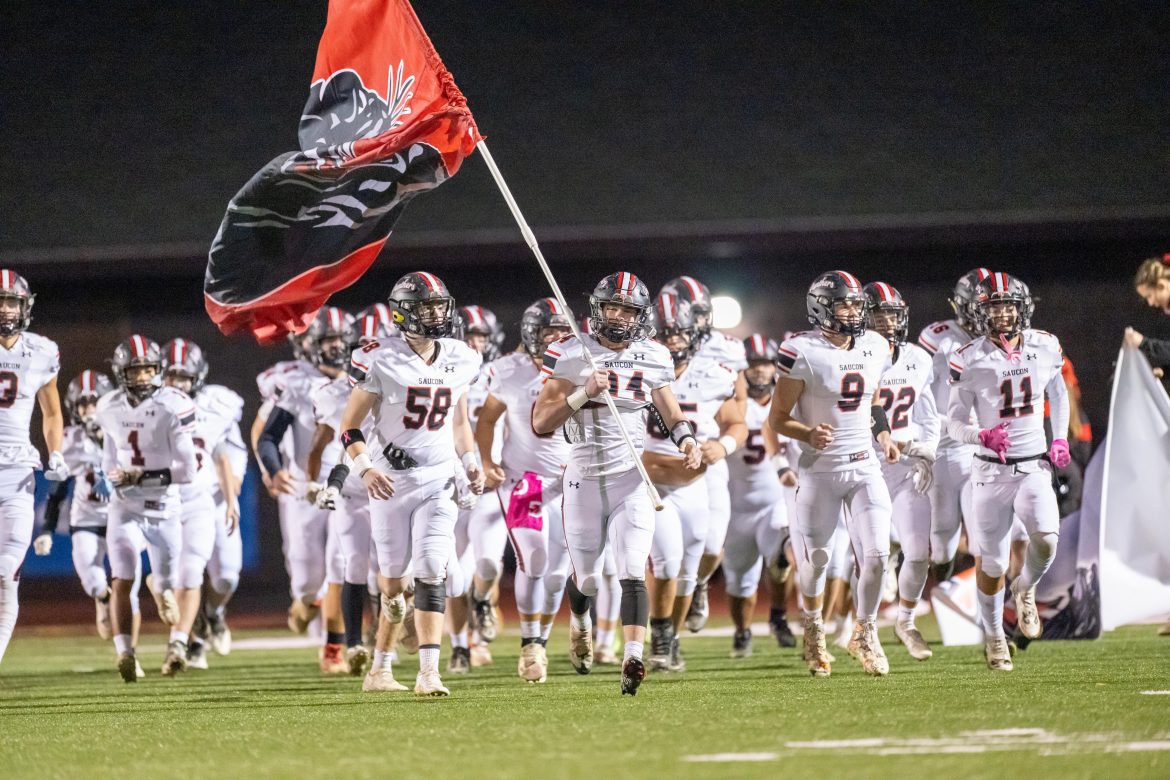 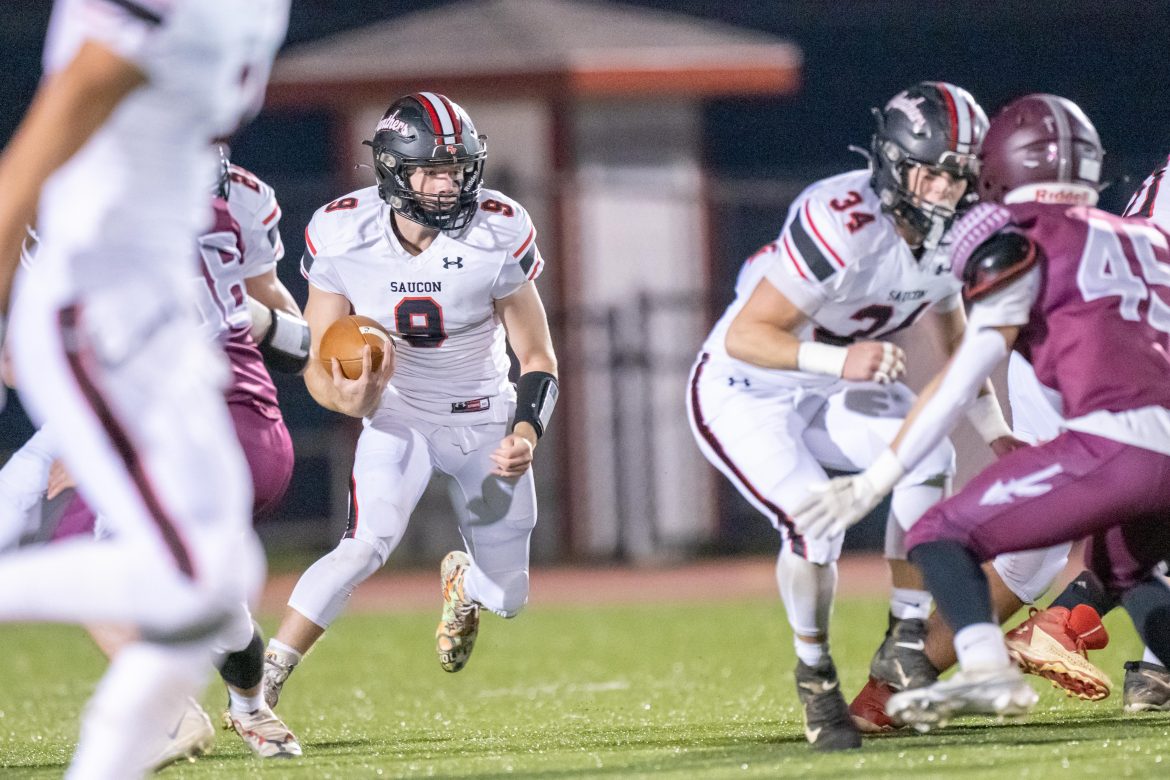 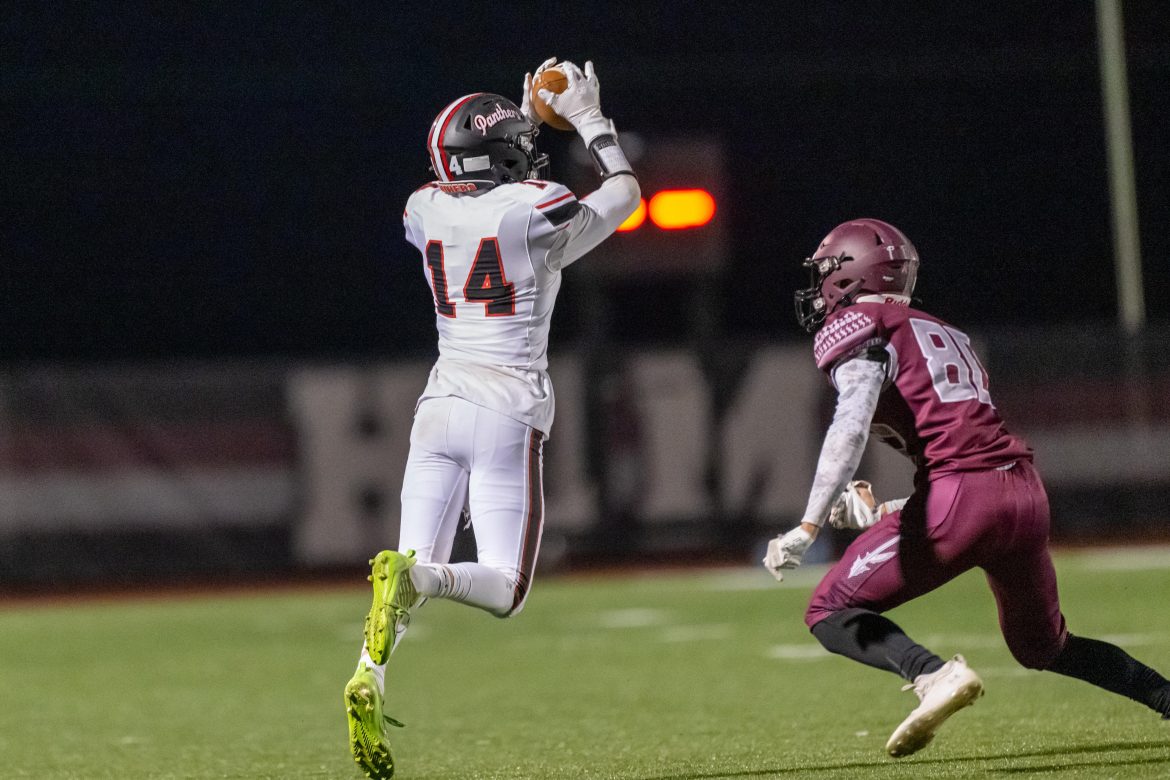 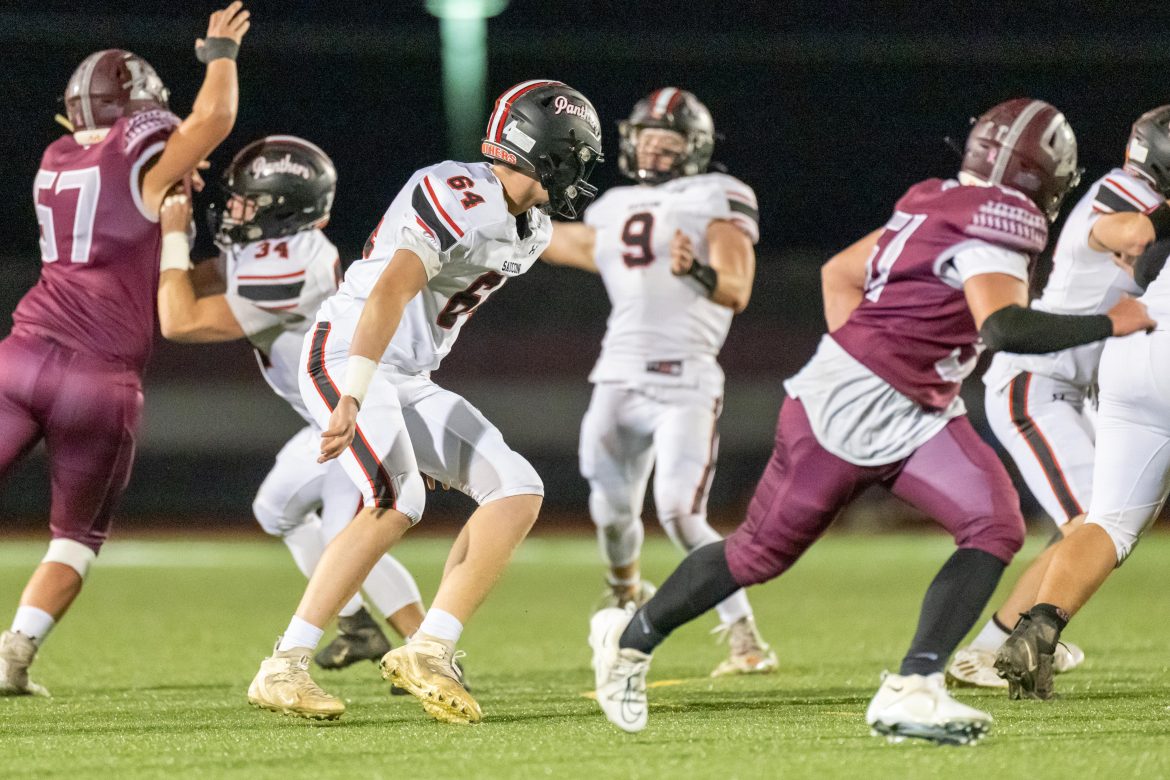 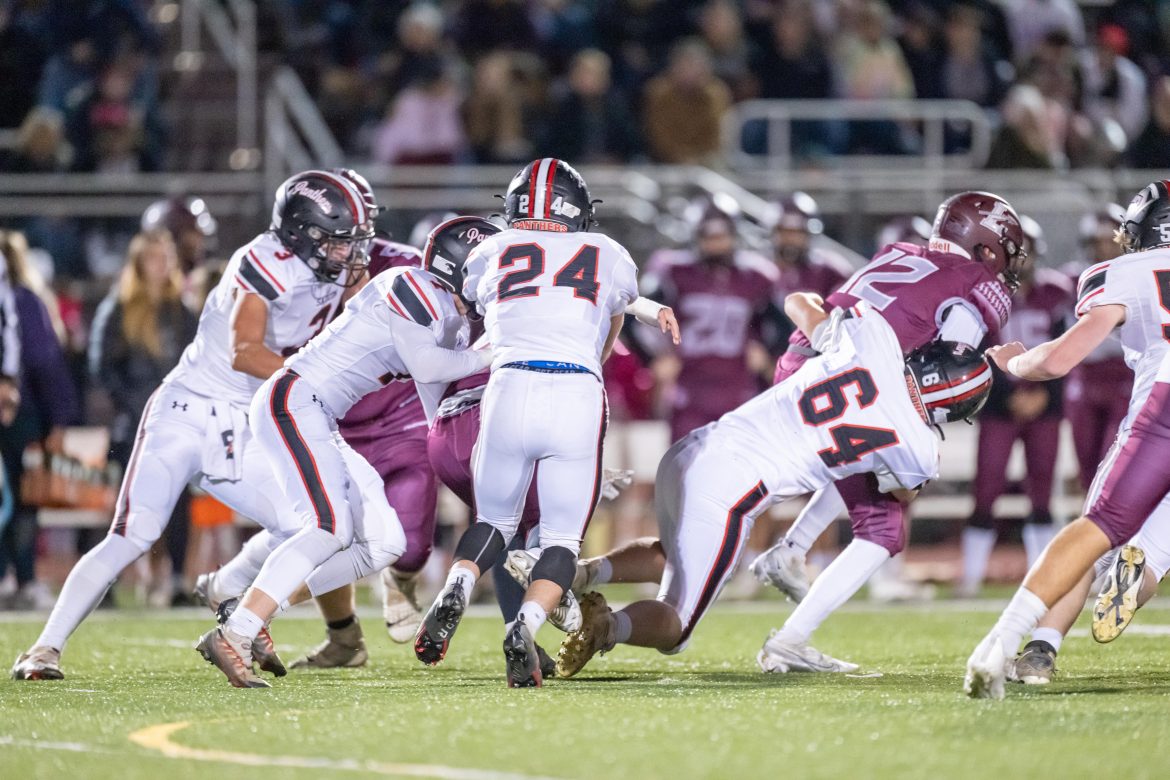 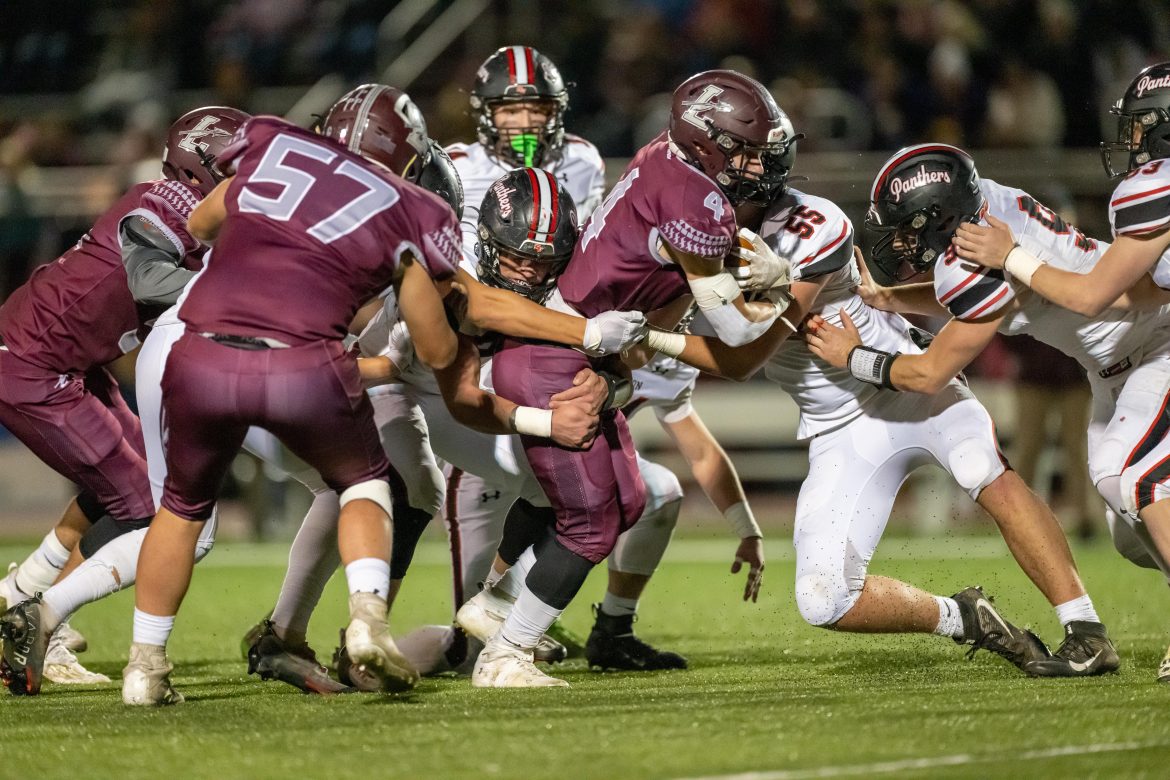 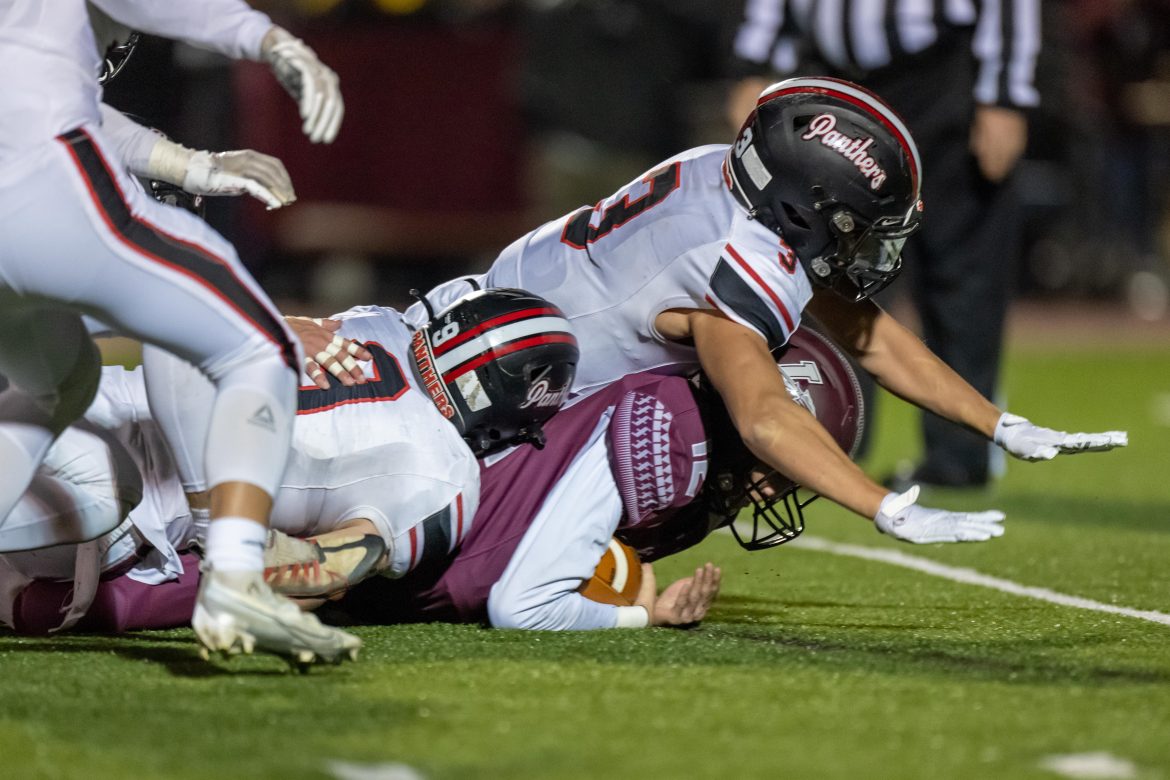 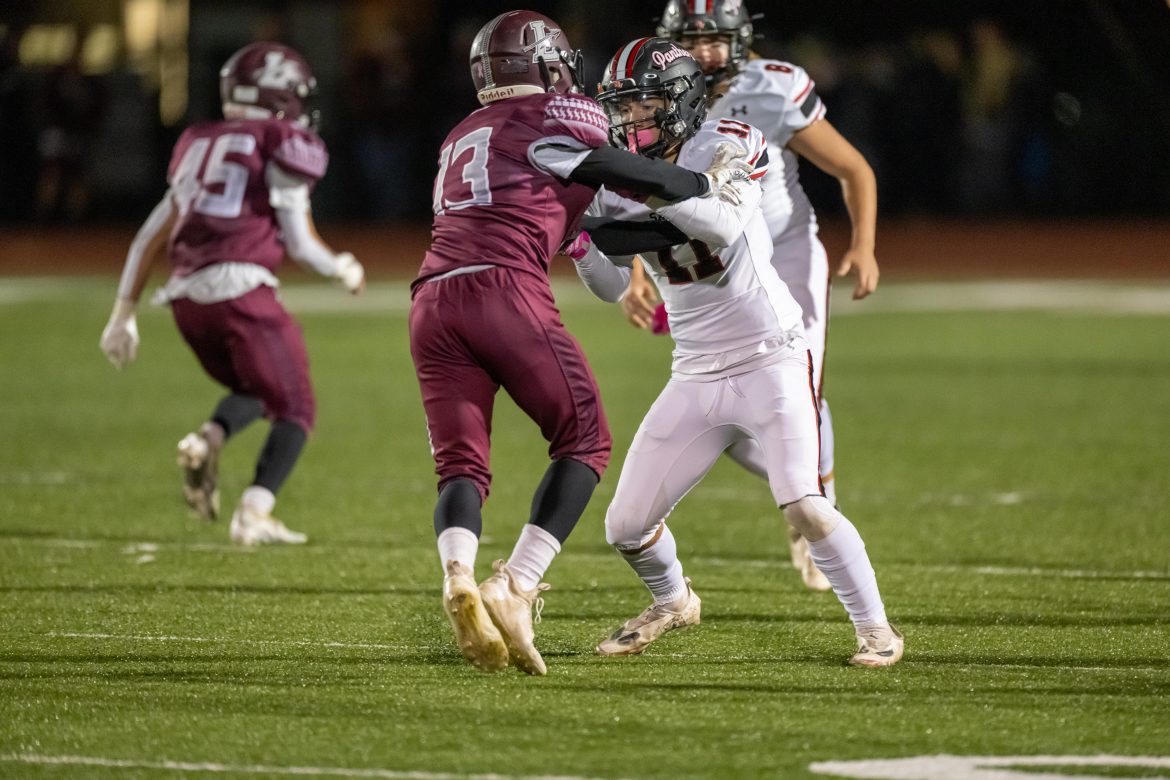 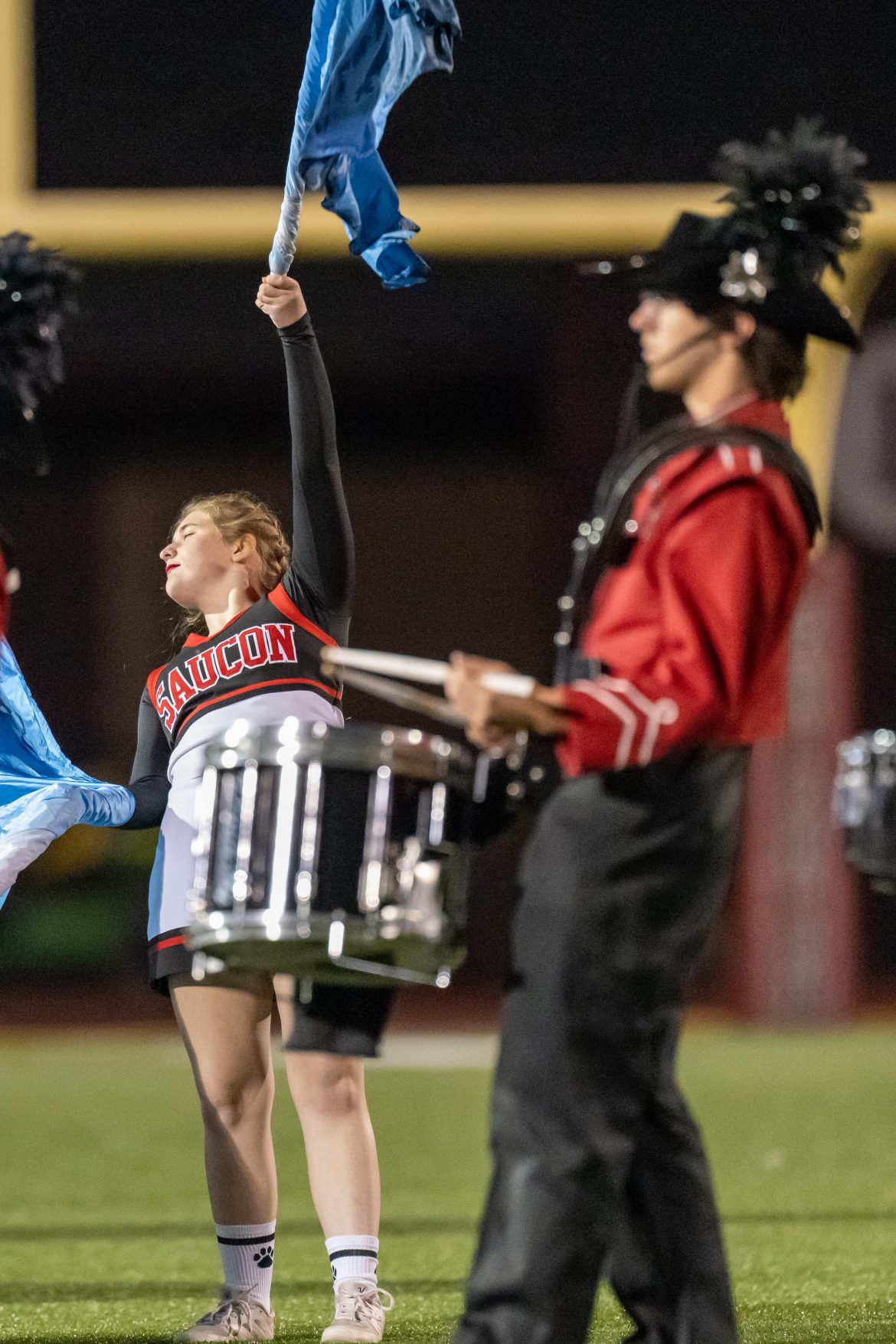 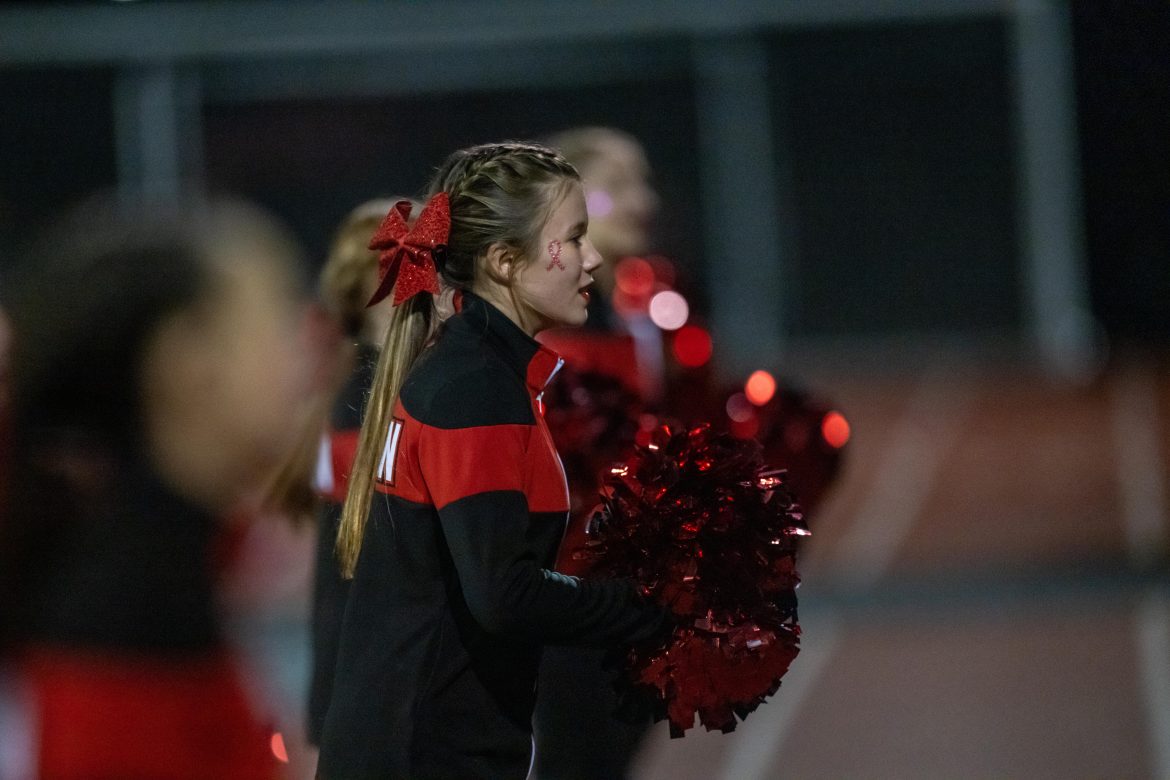