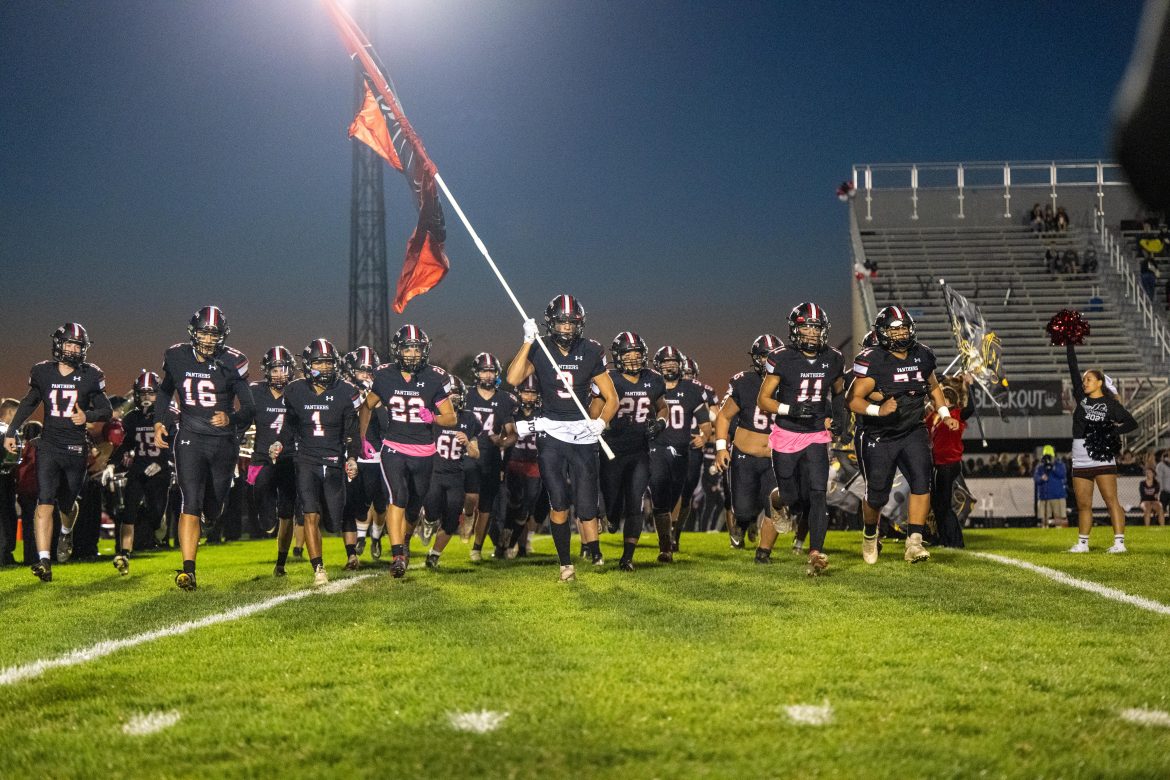 Friday night was Homecoming in the land of the Panthers.  Saucon Valley welcomed the Blue Mountain Eagles into town for all of the fun and festivities.  The Eagles were looking for their fifth win of the season while the Panthers were desperate to snap a four game losing streak and secure their third win. Last year the Saucon defeated Blue Mountain 35-14.

Blue Mountain received the opening kickoff and immediately went 3-and-out.  However, their punt was of the “shank” variety and was only good for 11-yards.  The Panthers took possession and went nowhere fast.  On 3rd & 11 from the Eagle 32-yardline and with pressure off the edge, Panther quarterback Travis Riefenstahl dropped back to pass. With the pass rush in his face he stepped up in the pocket and scrambled out toward the Eagle sideline freezing the Blue Mountain secondary who likely figured Riefenstahl was going to keep the ball and run.  As the Eagle defense hesitated and gave their full attention to the Panther quarterback, Saucon Valley sophomore wideout Jack Robertson got lost down the sideline and was left alone near the goal-line.  Riefenstahl found Robertson for a 32-yard touchdown pass.  Braeden Schriffert’s extra-point was good and about four minutes into the game Saucon Valley led 7-0. 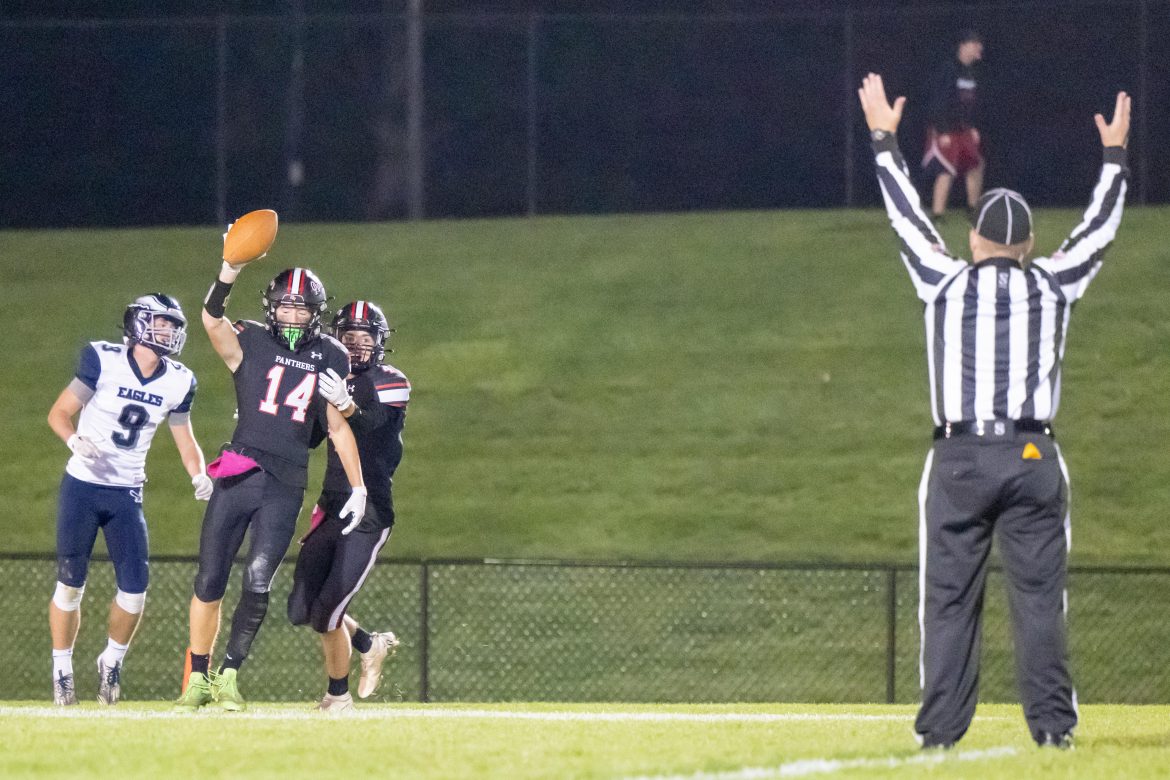 Saucon sophomore Jack Robertson (14) on his way to another big night for the Panthers.

After some stellar defense by both teams including a few tackles for loss by the Panthers Landon Beckowski, the teams punted their way back and forth into the second quarter.    Immediately following Saucon Valley’s second punt of the night Blue Mountain lit the scoreboard.  Tyler Miller dropped back to pass on 1st & 10 from the Panther 44-yardline and threw a bomb down the seam to Eagle teammate Carson Kerstetter who split the Panther defenders for a score.  The PAT was solid and with 11:40 left in the second quarter the score was knotted 7-7.

On their next possession the Panthers went a little pass happy.  Highlighted by three completions to Alex Magnotta, the Panthers made their way to the Eagle 13-yardline.   On 3rd & 9 Riefenstahl dropped back and fired a pass to Jack Robertson who beat his coverage and split the Eagle safeties for six.  Schriffert was good again and with 7:34 left in the first half, Saucon jumped back on top 14-7. 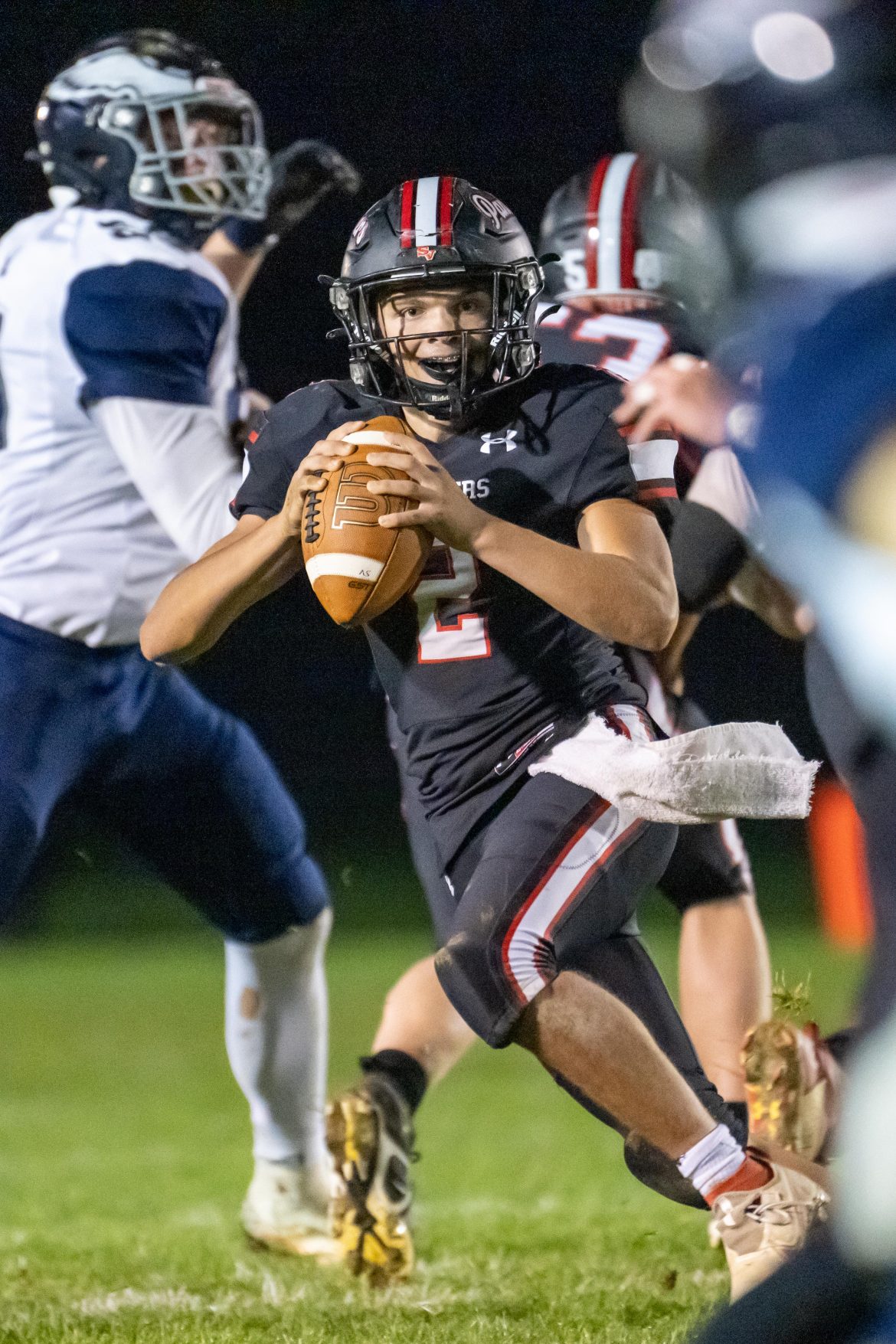 Blue Mountain came right back to gash the Panthers for seventy, quick-strike yards a little over a minute later.  In only three plays the Eagles tied the score when quarterback Tyler Miller faked a handoff to the jet-sweep and popped the center of the Panther defense with a 38-yard touchdown run.  The extra-point hit its mark and at 6:16 of the second quarter Blue Mountain climbed back to even.

Courtesy of a pass-interference penalty against Jared Rohn, a 10-yard completion to Braden Weiss, a 9-yard punishing run by Josh Torres and a 19-yard scramble by Riefenstahl, the Panthers found themselves in a 3rd & 8 situation from the Eagle 9-yardline with under two minutes left in the half.  For the third time this night, Riefenstahl hooked up with Robertson for six points.  This time Robertson, from his wideout position, broke off his slant route and reversed back to the sideline.  Riefenstahl rolled Robertson’s way and threw a strike right at the goal-line pylon. Robertson toe-tapped the end-zone to secure the score.  After Schriffert’s extra-point the Panthers hit the locker-room at halftime with a 21-14 advantage. 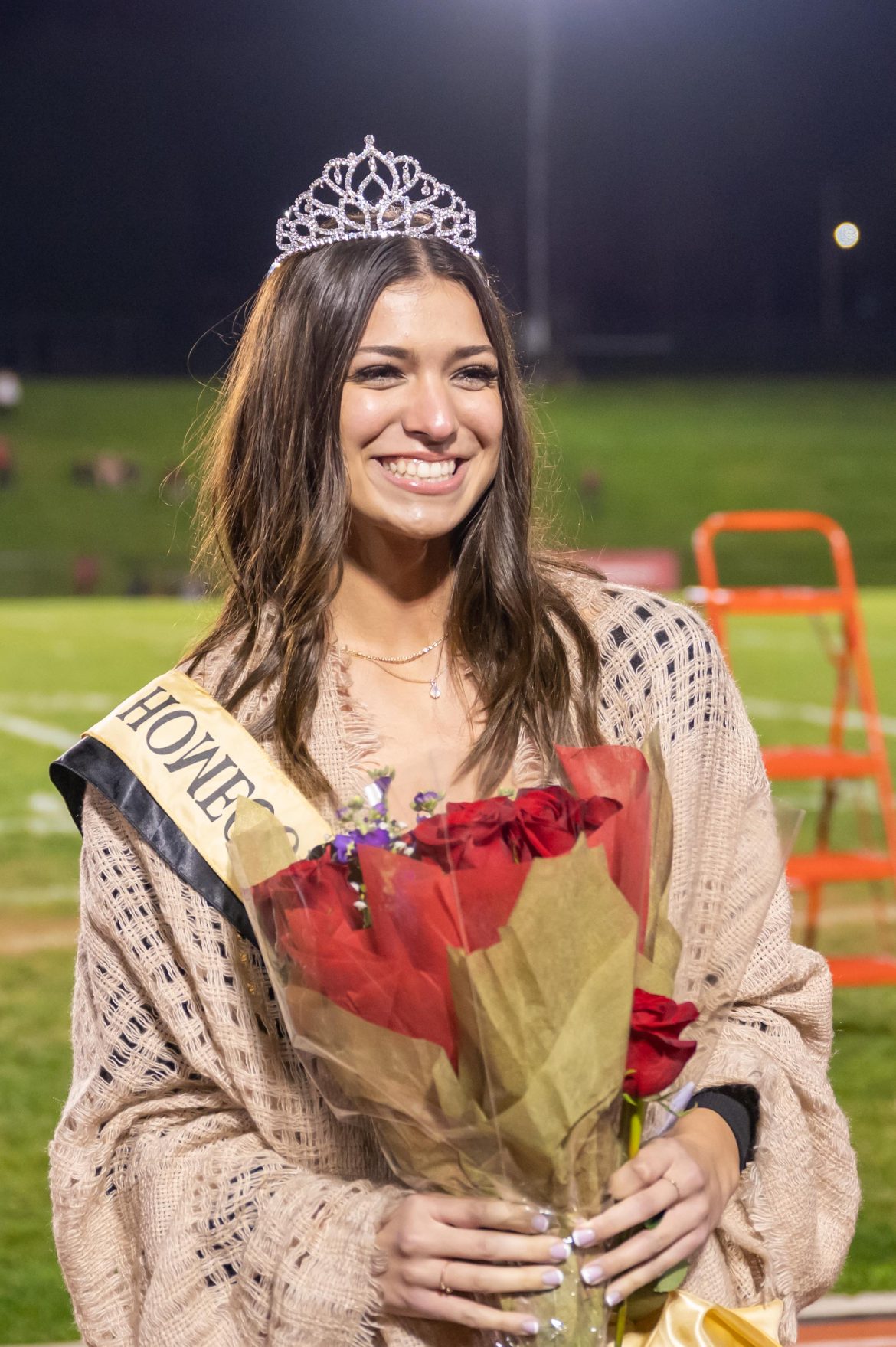 Following the crowning of Peyton Markle as Saucon Valley’s 2022 Homecoming Queen at halftime, the Panthers averted disaster after their 3-and-out punt was fumbled away at their own 2-yardline.  Due to a couple costly penalties, however, the Eagles squandered the opportunity for points when their 29-yard field goal attempt missed its mark. 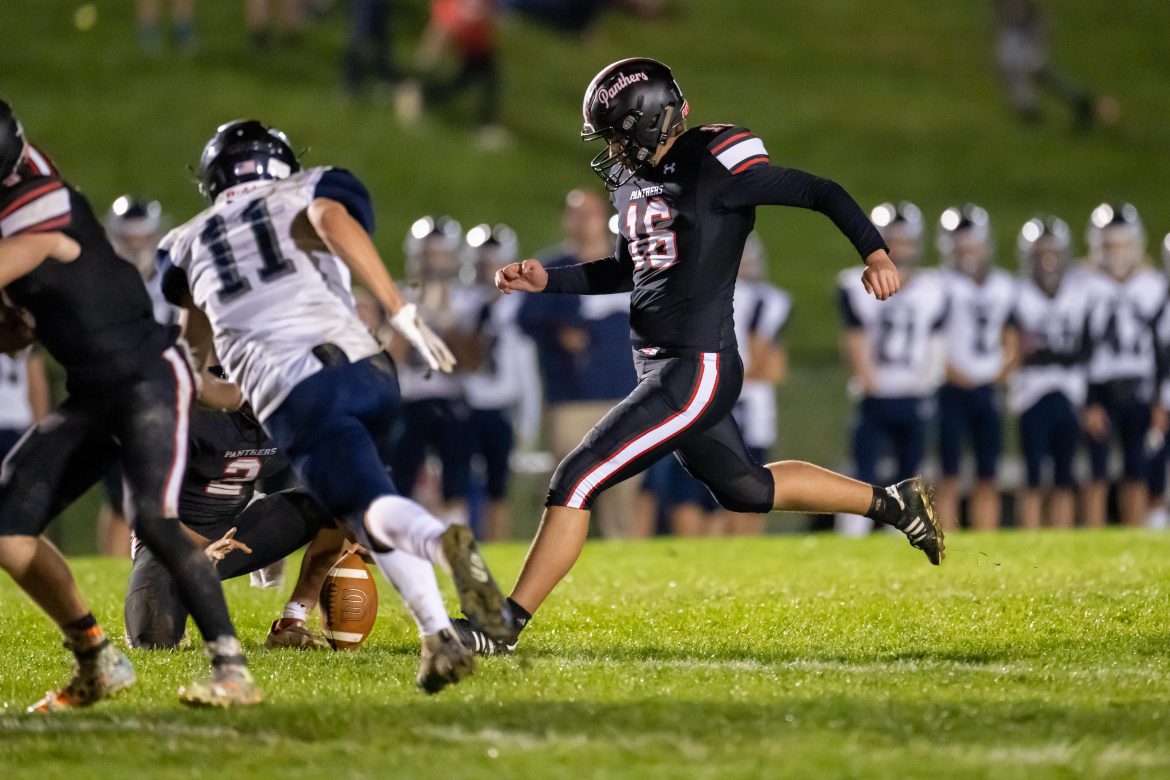 After a series of punts and a Jack Robertson interception died on the vine, the two teams meandered their way into the middle of the fourth quarter with neither team lighting the scoreboard.  Saucon Valley was finally able to sustain a drive on the back of a couple of Josh Torres’ runs.  On 3rd & 9 from midfield Torres found room behind the right side of his line and was able to break a couple of tackles and power his way to a 34-yard gain down to the Blue Mountain 15-yardline.  Unfortunately, the Panthers could go no further and lined up for Braeden Schriffert’s very first career field goal attempt.  Schriffert heroically stepped up and split the uprights from 25-yard out.  With five minutes left to play, Saucon rejoiced and led 24-14. 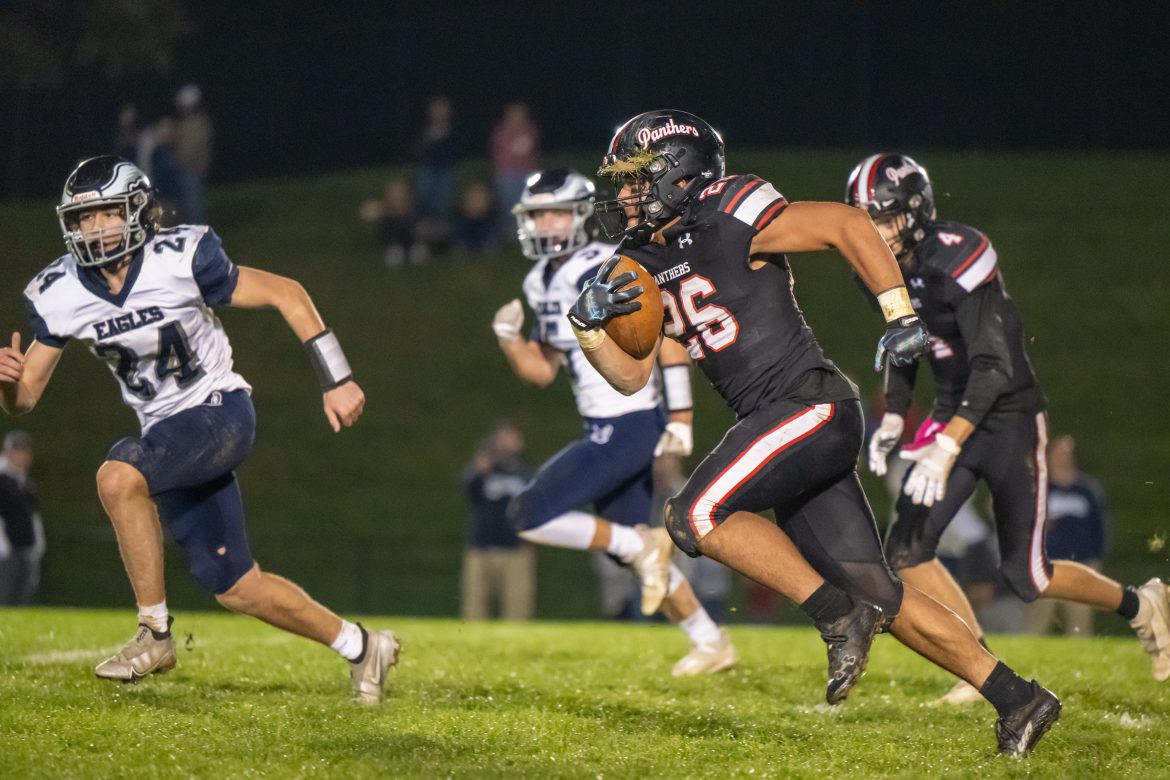 There was no quit in the Blue Mountain squad.   The Eagles went to work and capitalized on a 51-yard reception to give themselves a 1st & Goal situation from the Panther 8-yardline.  From a double-tight, full house backfield formation, Tyler Miller went play-action fake and fired a pass over the middle to Carson Kerstetter for their second scoring combo of the night.   The PAT was good and with 2:30 left to play the Panthers held a 24-21 lead.

Blue Mountain’s onside kick attempt failed, but the Panthers could not earn themselves a first down.  Perhaps, more importantly for the Eagles, Saucon Valley was forced to punt the ball back with 1:56 still on the game clock.  On the first play of the new drive, Blue Mountain emptied the backfield in favor of five wideouts.  Four of the wideouts wheeled their way deep down the field with the remaining receiver, Derek Walasavage delaying and then dragging across the field and outrunning the underneath coverage.  It was only an 8-yard pass, but Walasavage raced a total of 47-yards all the way to the Panther 29-yardline.  With time ticking down, Blue Mountain was able to grind their way to the Panther 18-yardline where, on 4th & 5, they lined up for a field goal attempt.  The Eagle kick would not, however, dampen the Panther Homecoming festivities.  It missed wide left and the Saucon celebration began.  The Panthers held on for an exhilarating 24-21 victory. 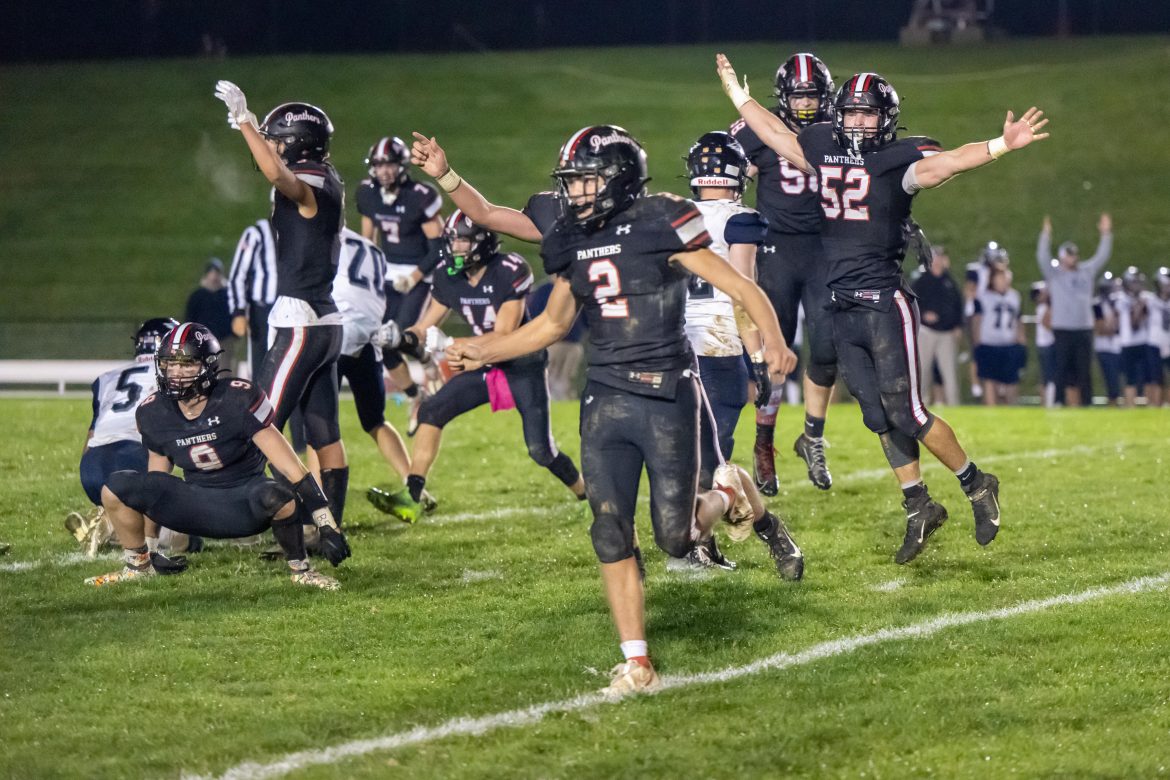 UP NEXT:  The Panthers (3-5) hit the road to battle the Lehighton Indians.  Kickoff at Lehighton is scheduled for 7 p.m. 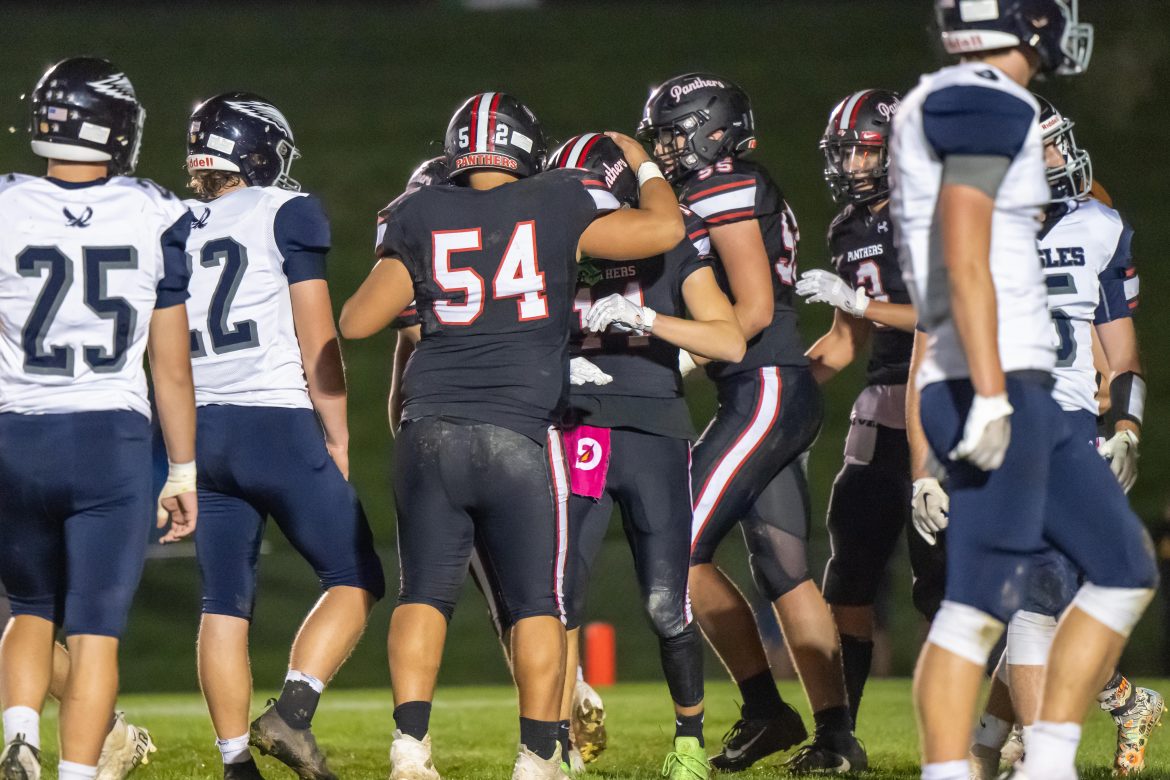 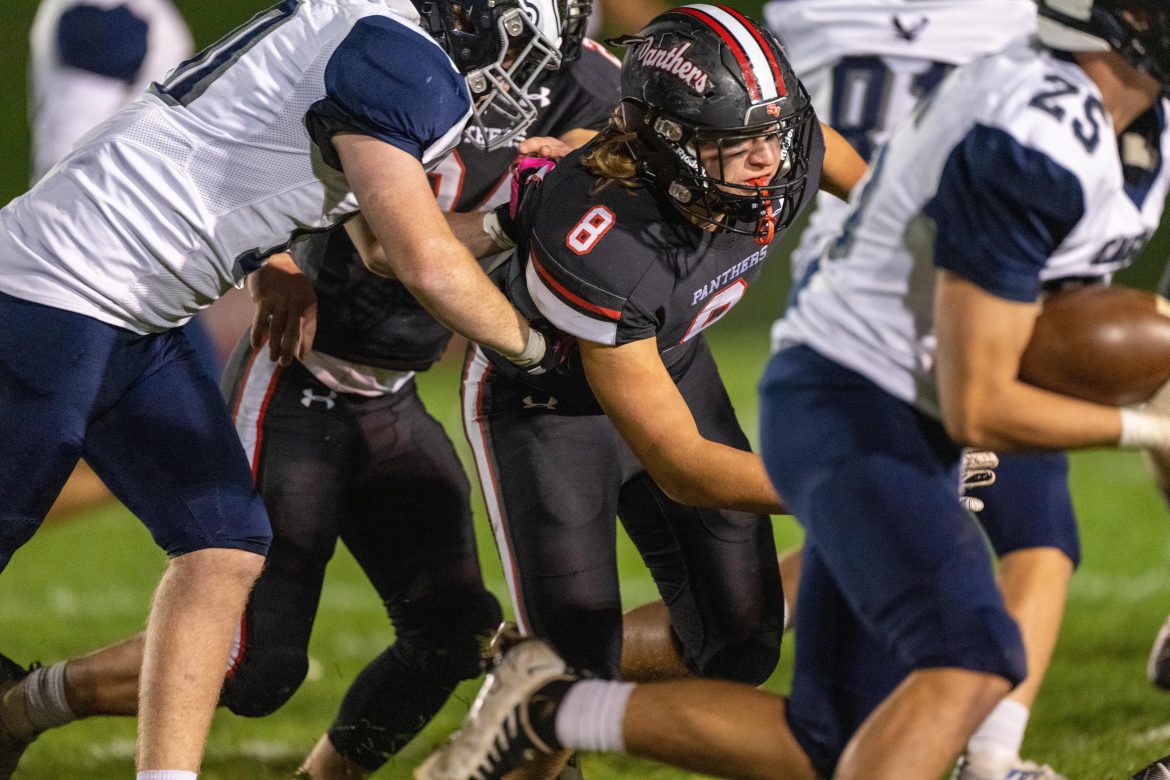 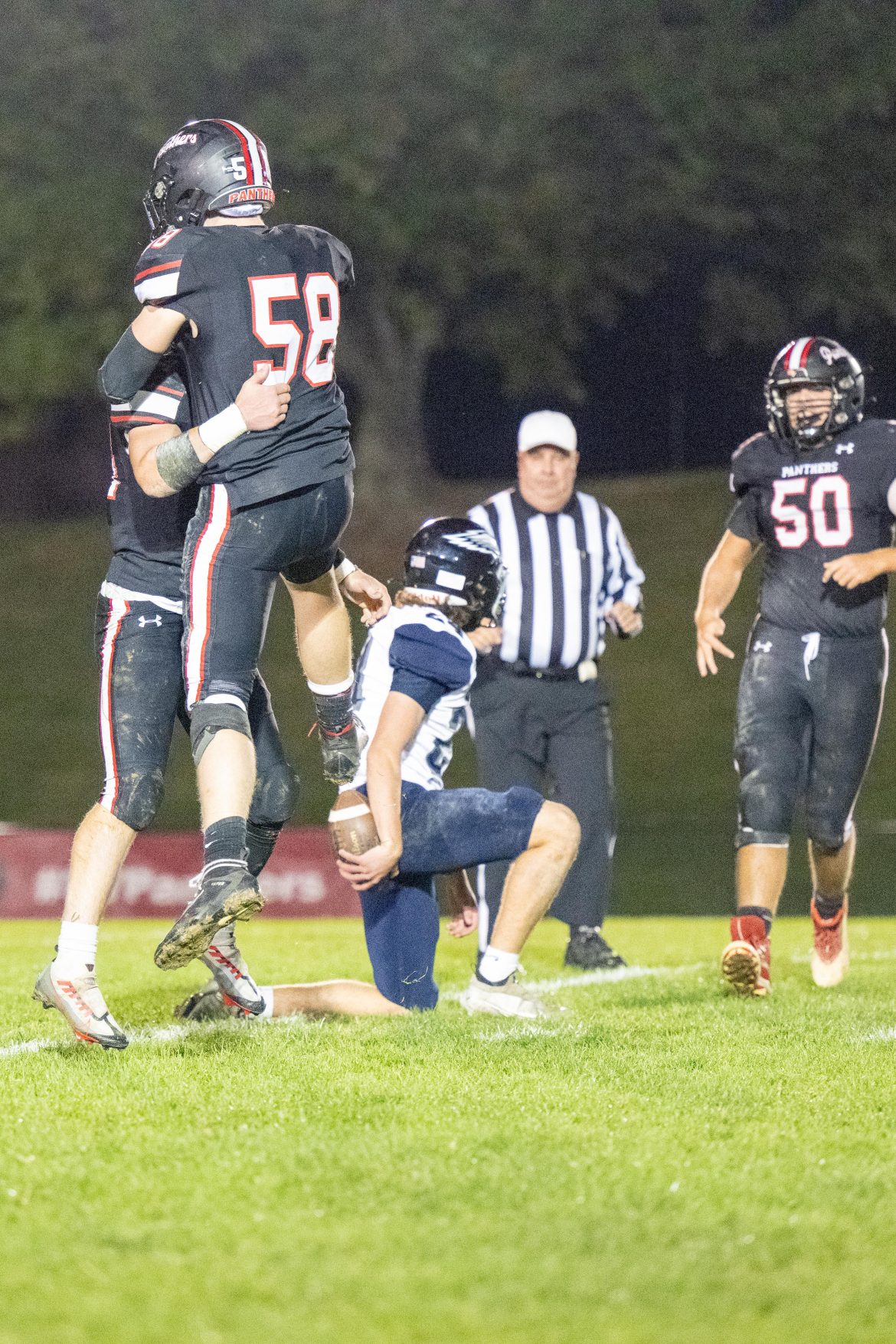 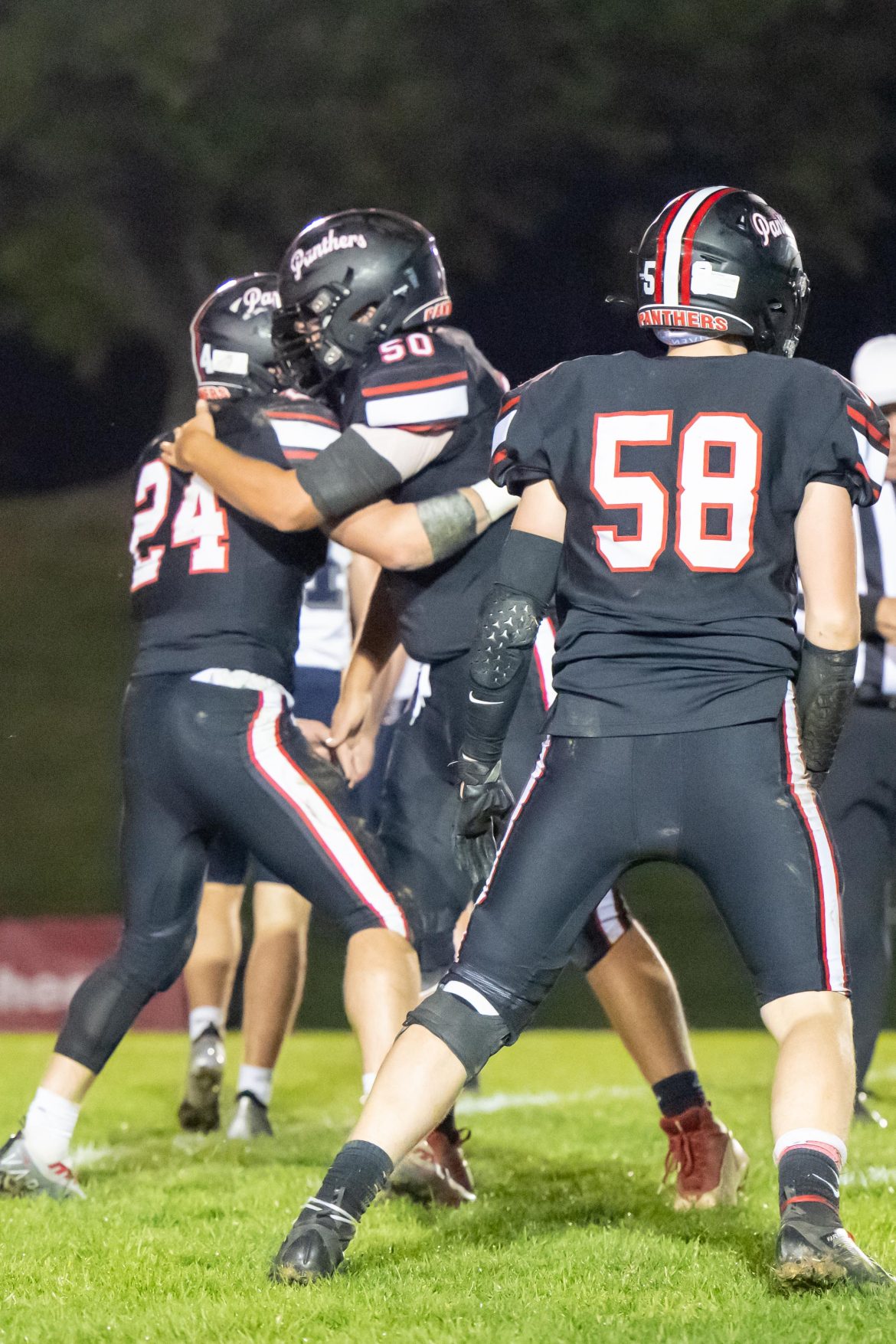 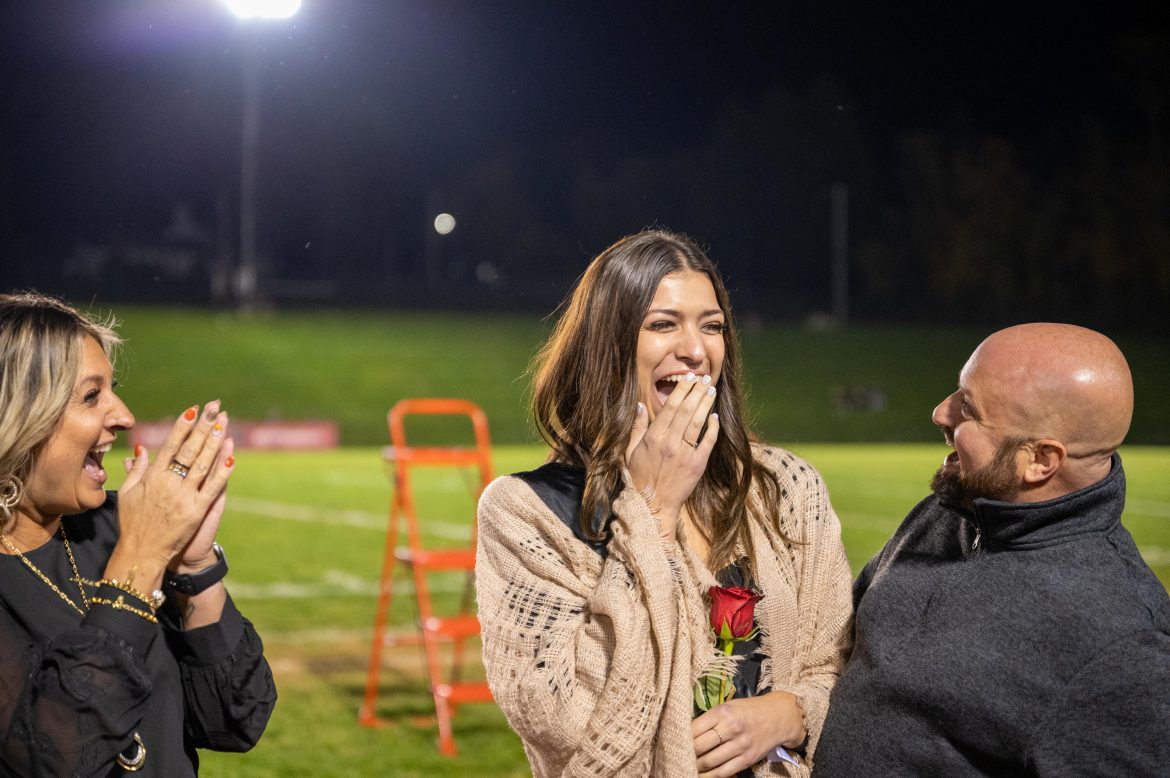 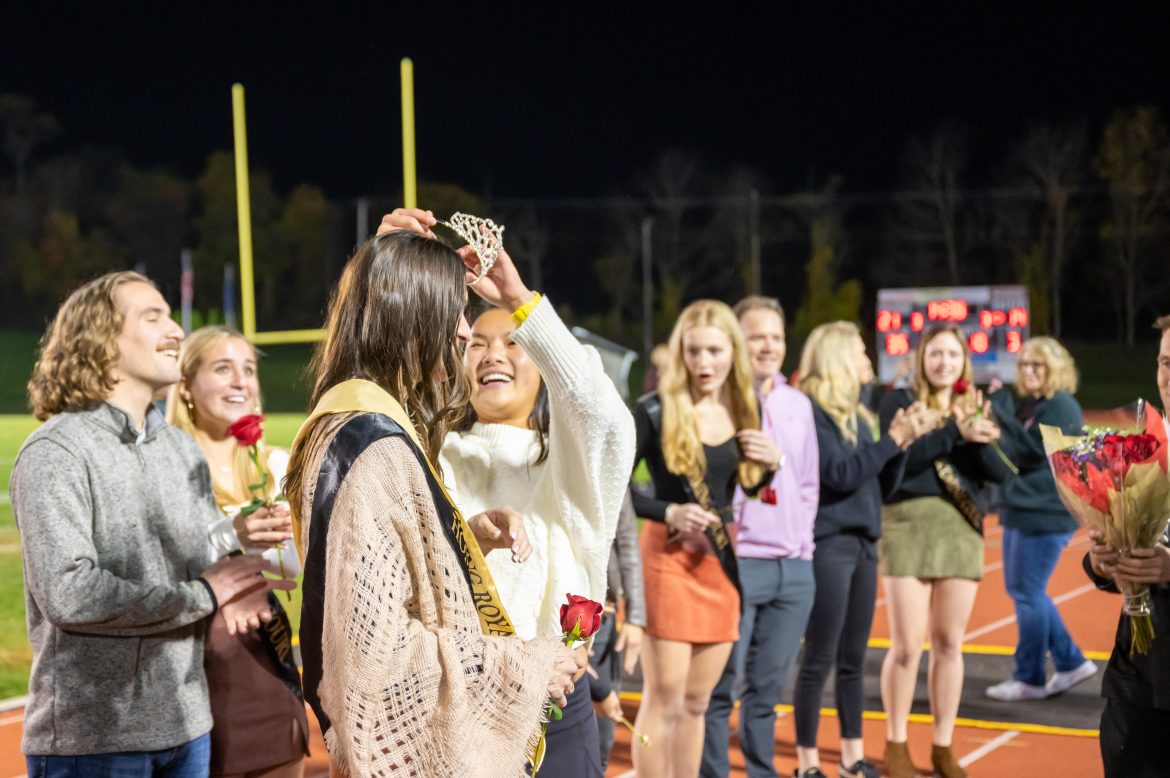 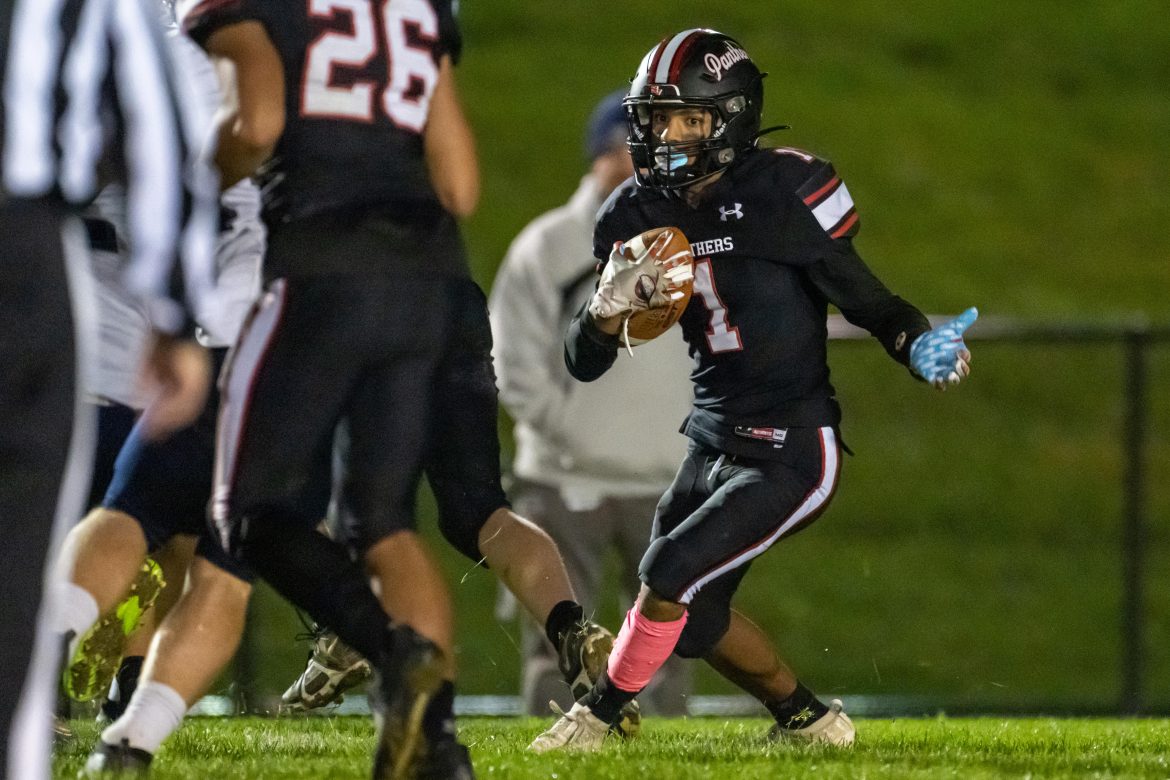 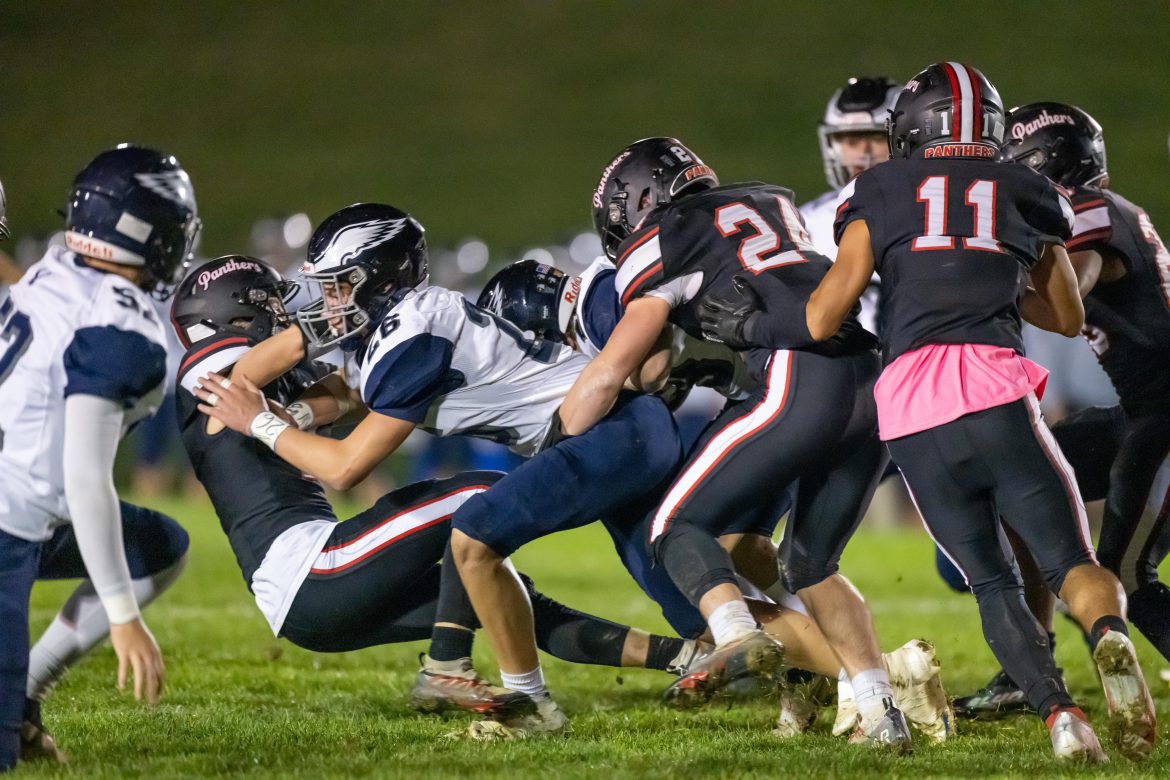 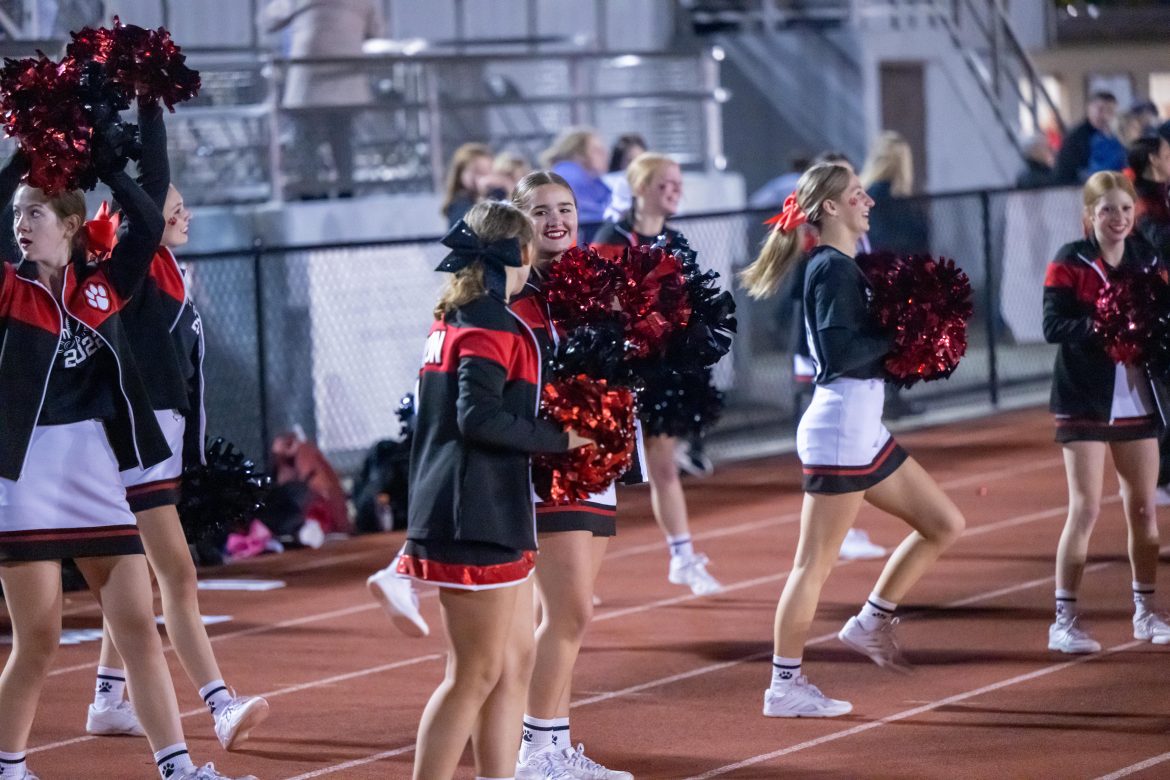 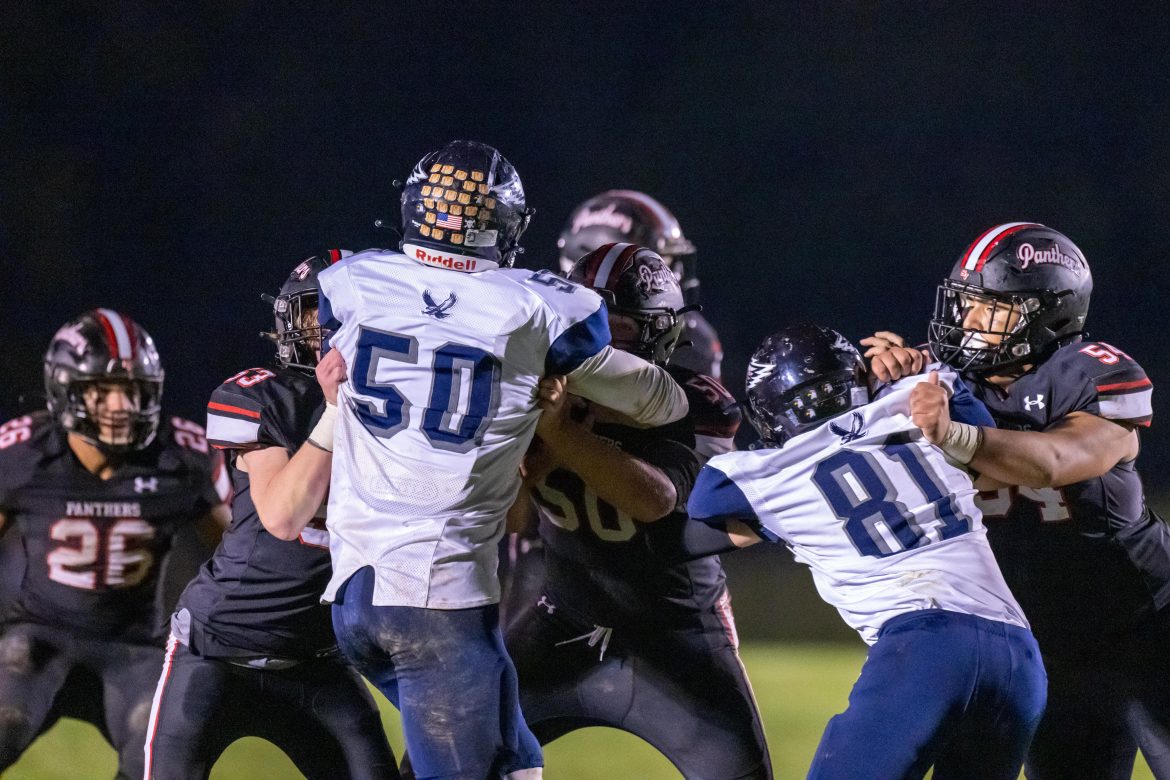 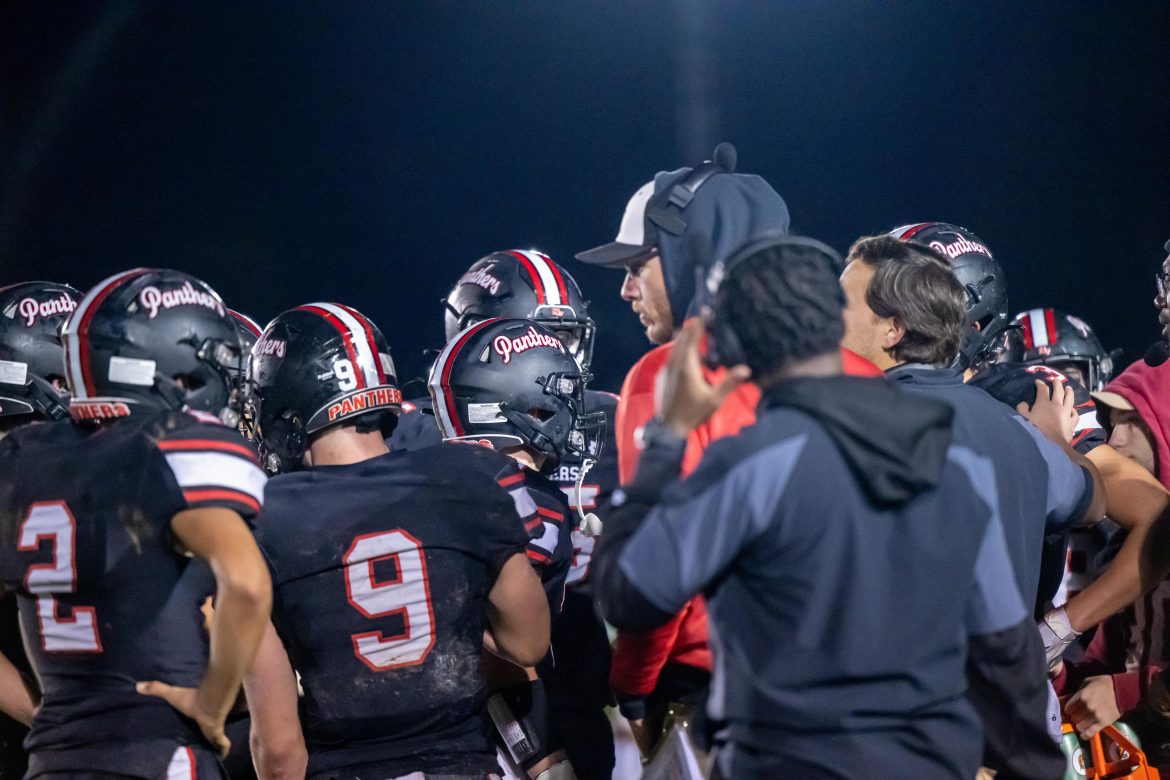 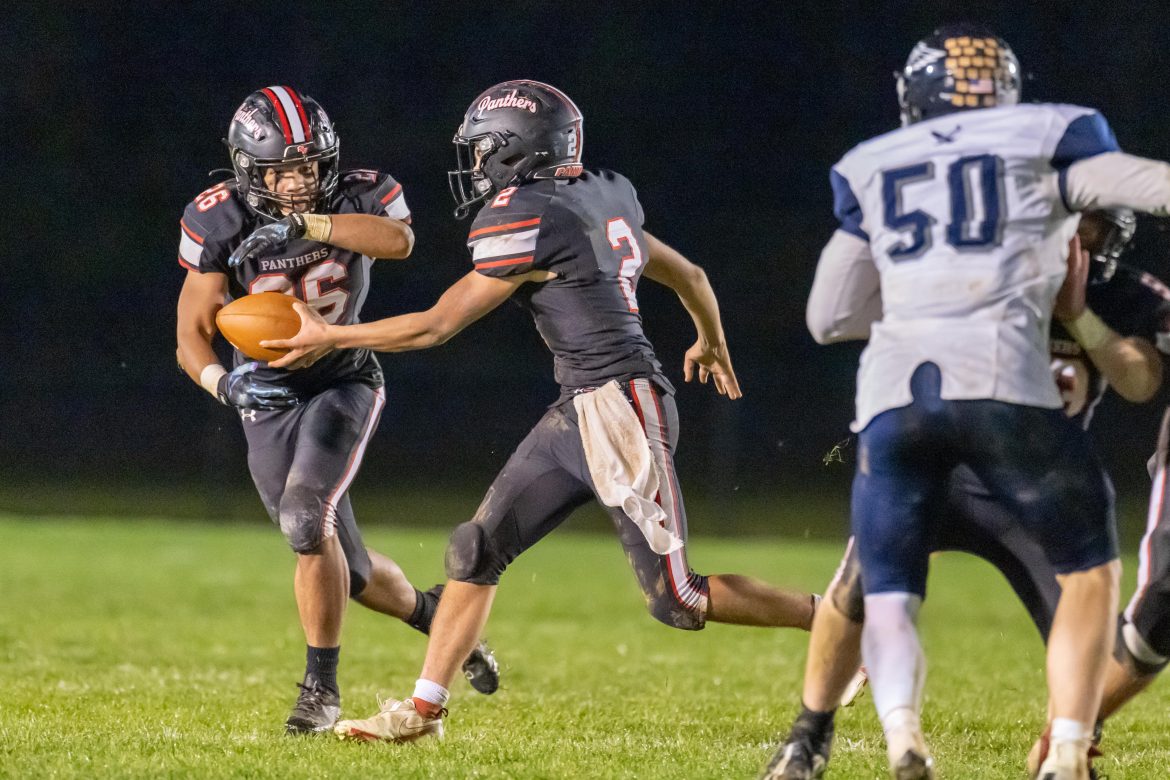 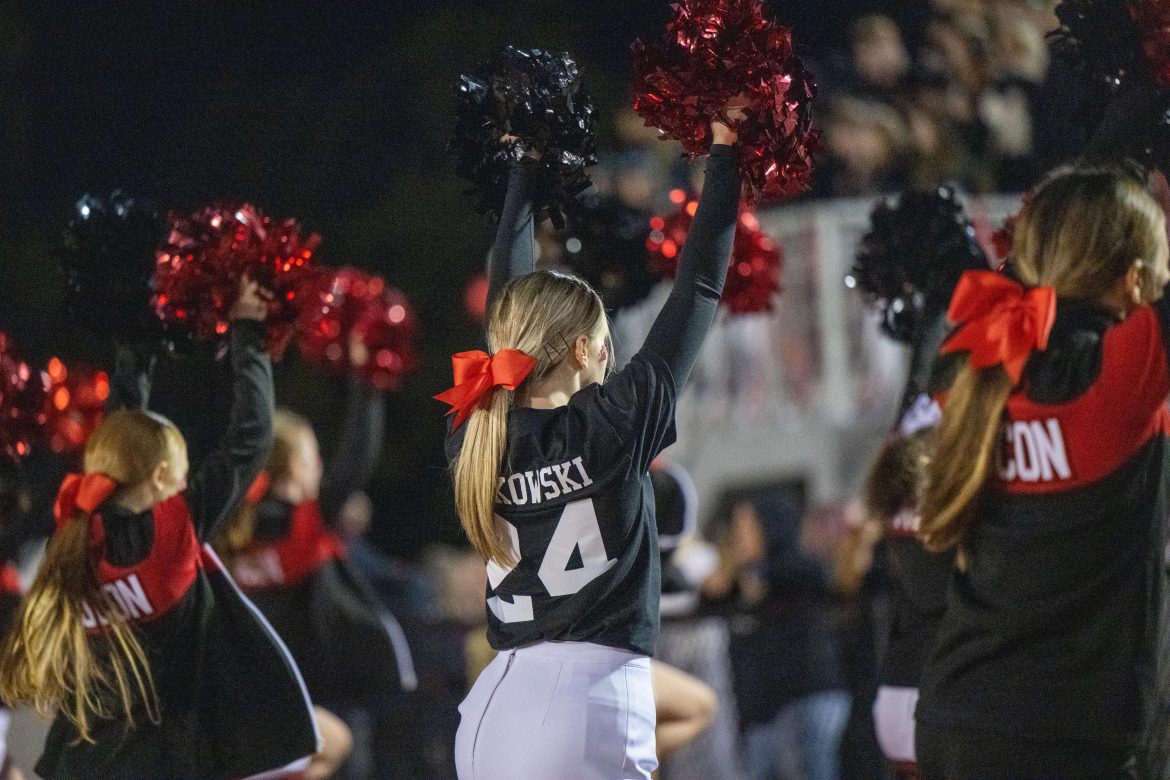 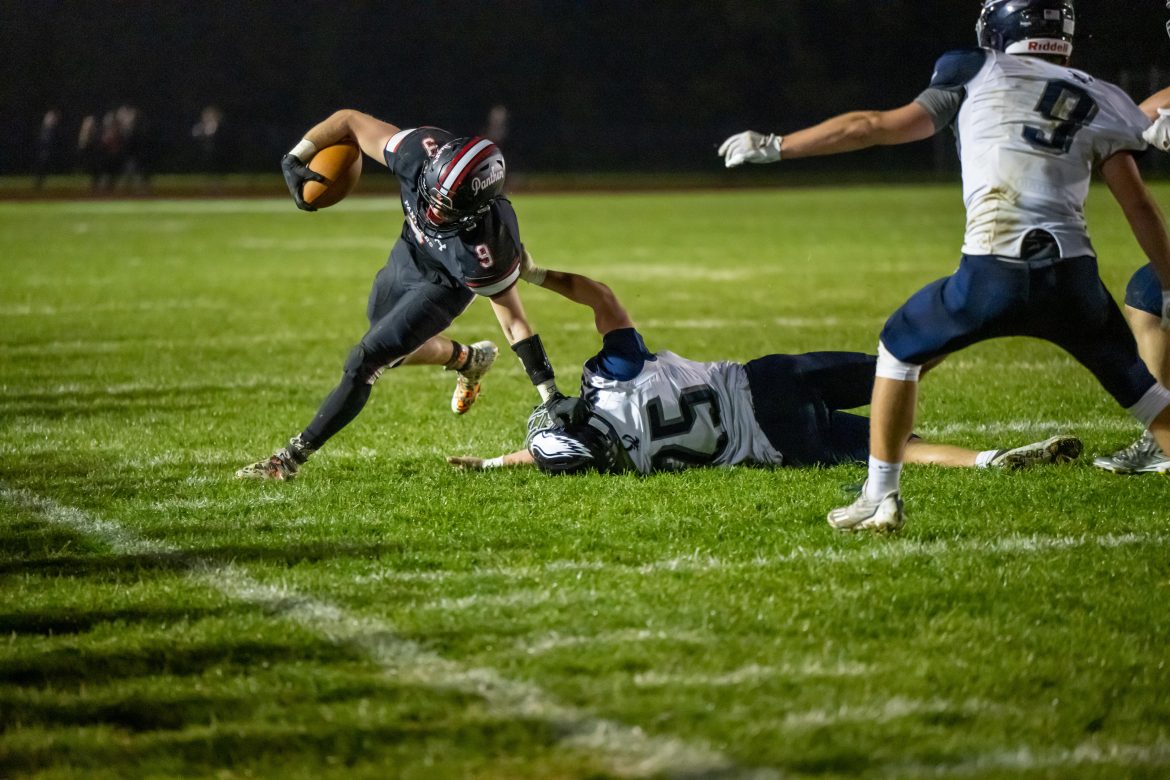 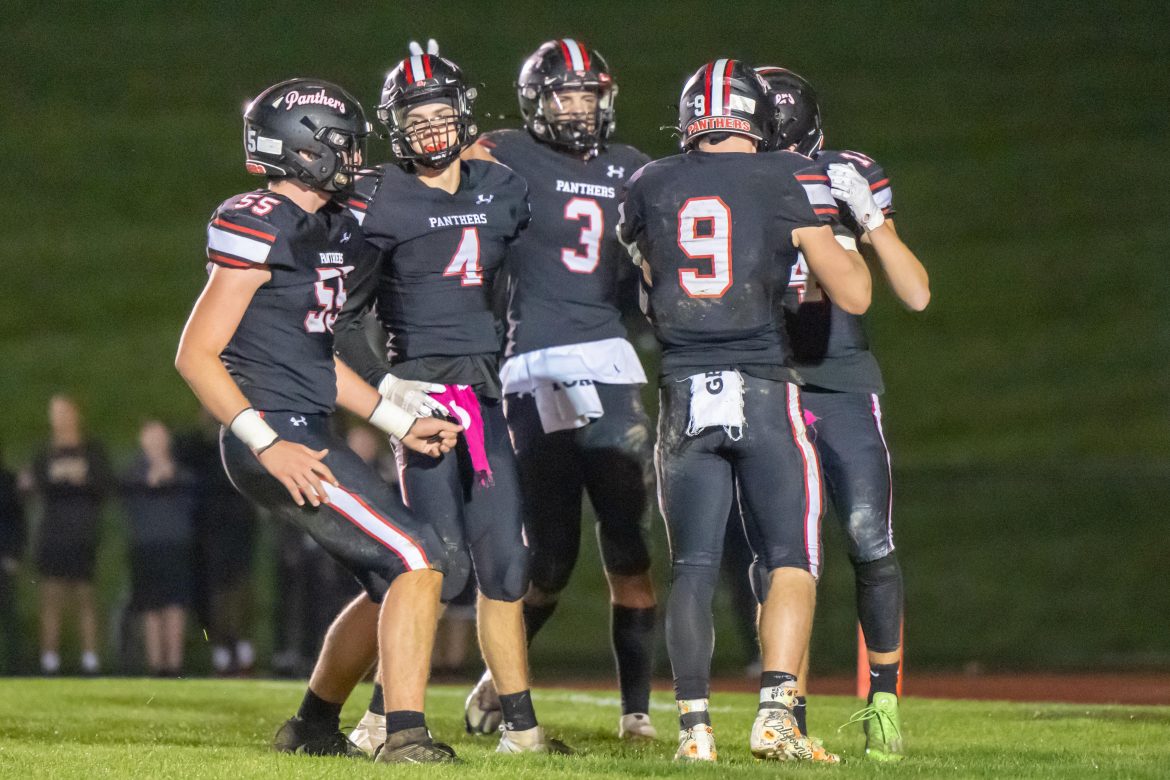 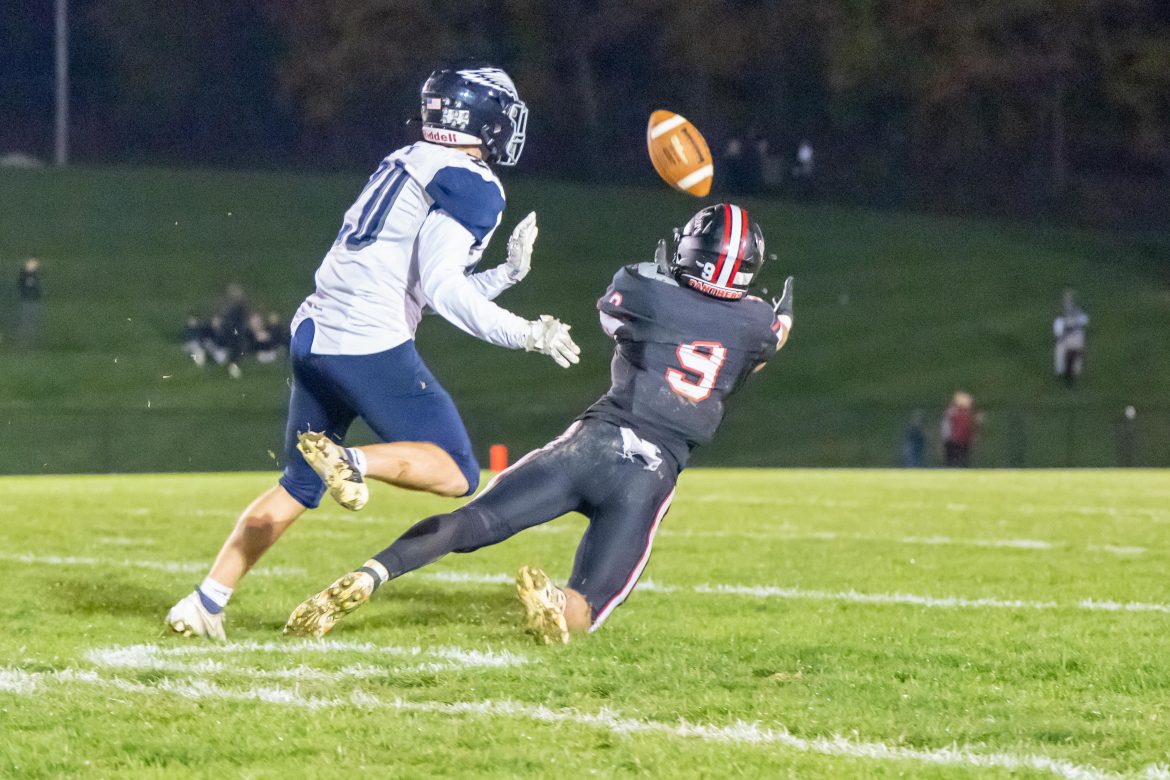 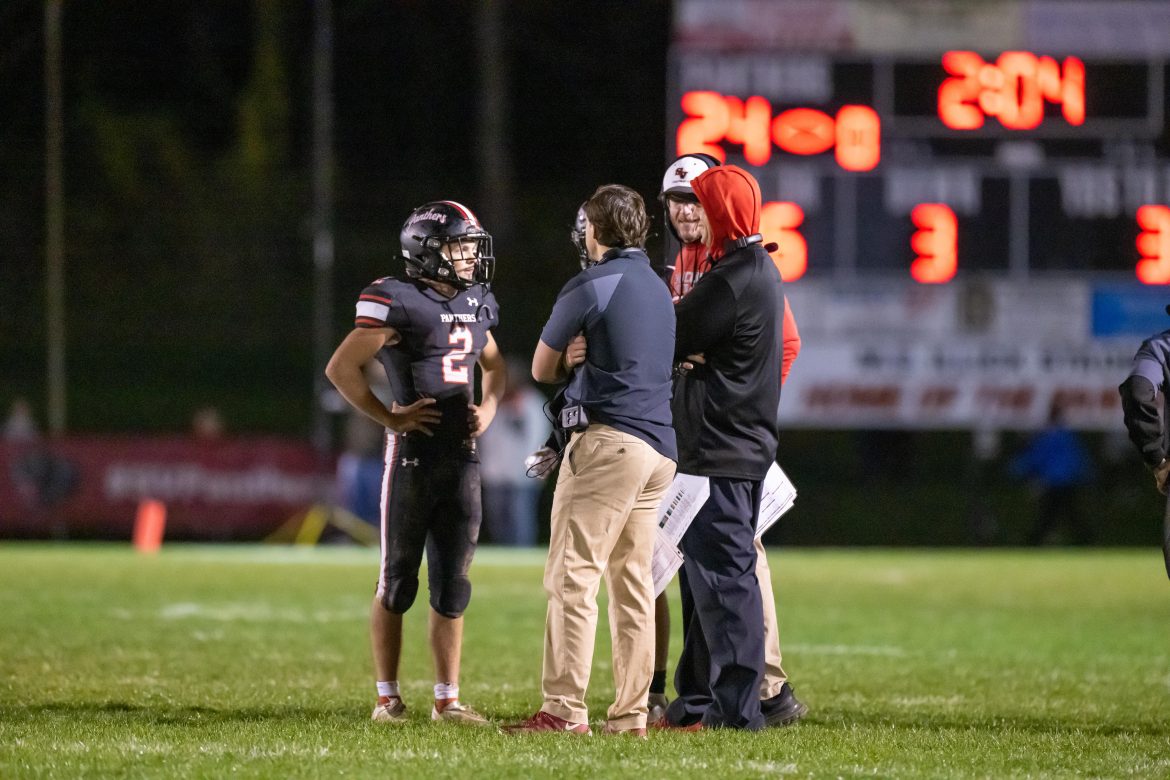 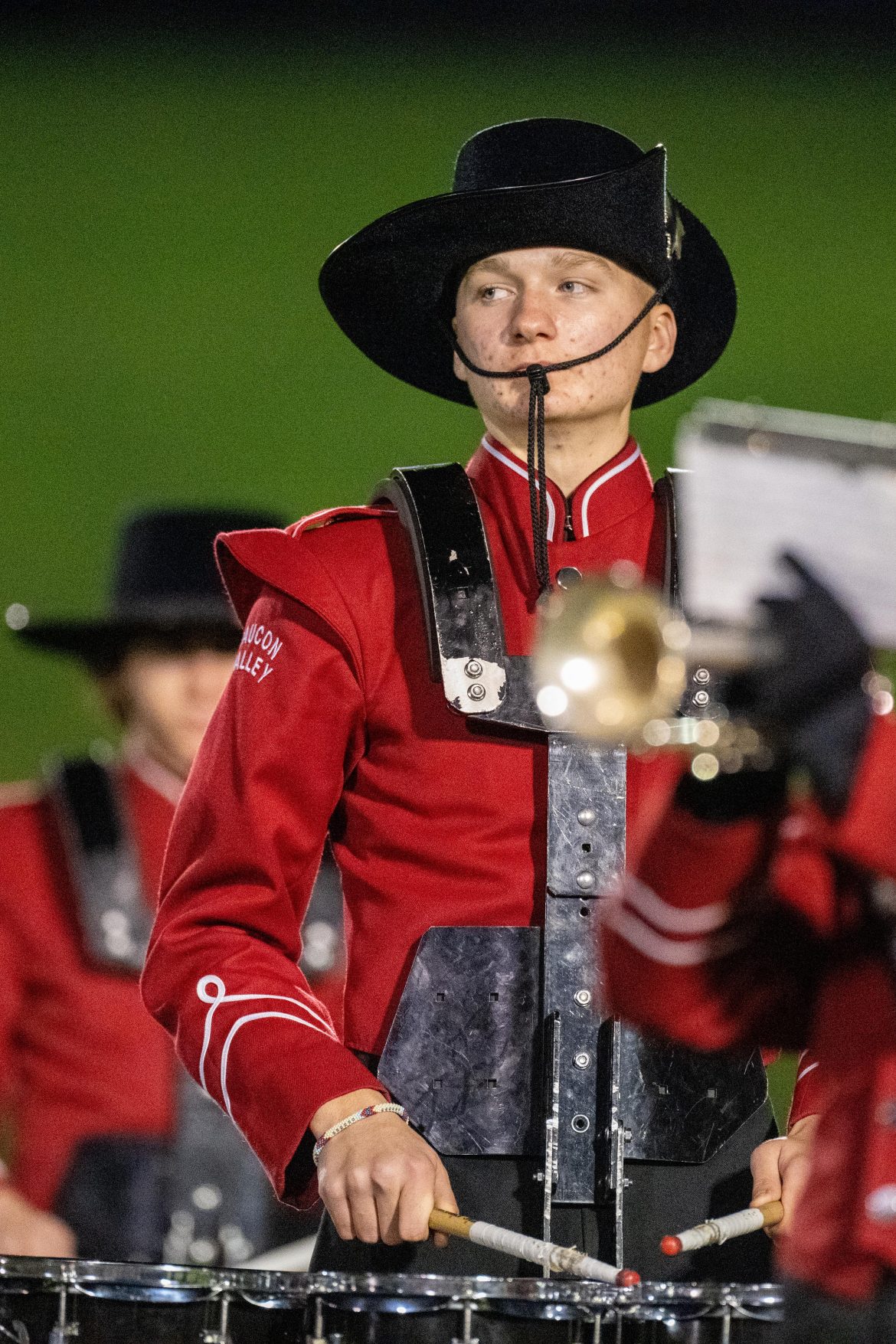 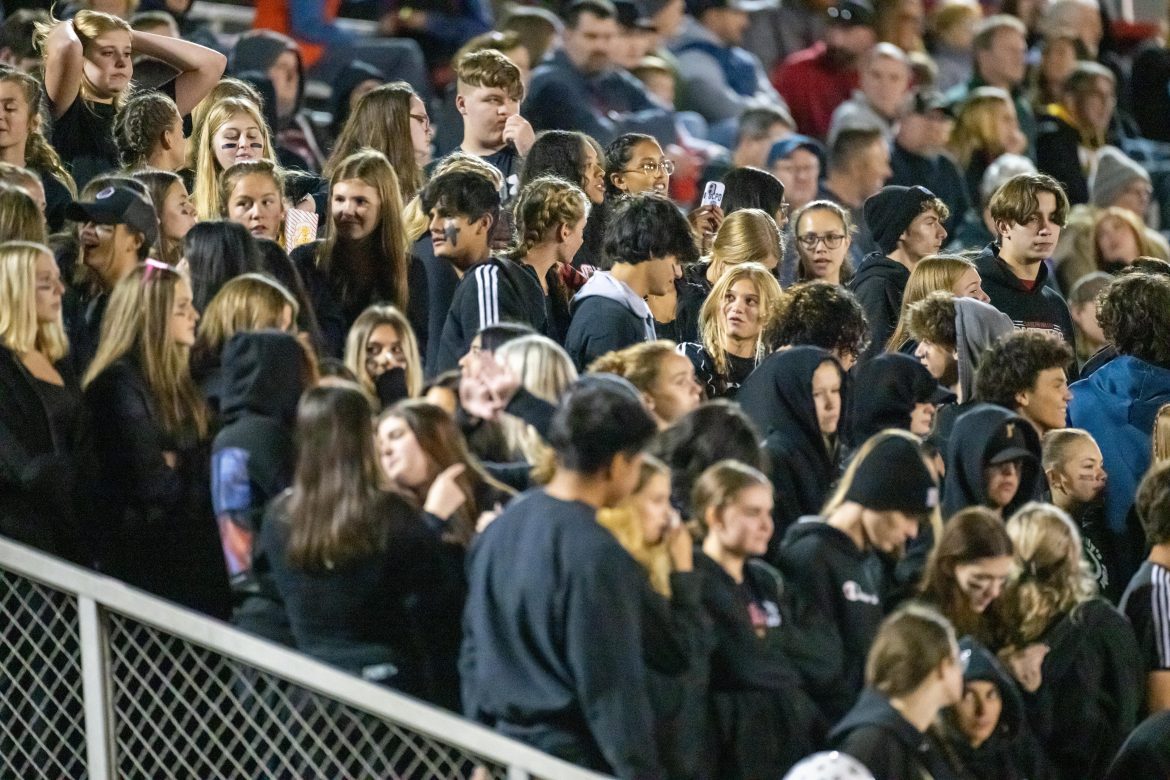