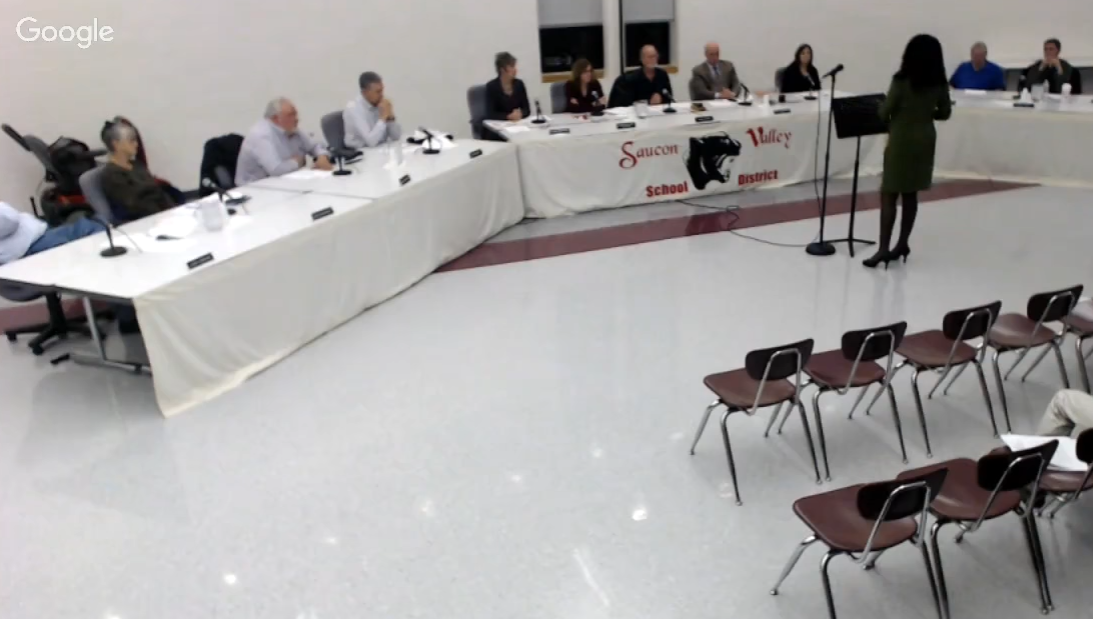 WARNING: This story contains language that is considered racially offensive.

Al Rivers, a Lower Saucon Township resident and father of four children–two of whom are Saucon Valley graduates–addressed the Saucon Valley School Board Tuesday about incidents his younger children have faced that he said are racially-motivated. His remarks were part of a conversation about race-related issues at Saucon that developed at the meeting and highlighted some ugly alleged behavior by students.

Rivers, who is African-American, said “there’s a stench here at Lower Saucon that needs to be dealt with.”

“The stench we have here…is racism,” he said. “We have a lot of remarks going around. There’s been reports of kids being called ‘nigger.’ There have been reports of children–I personally, my daughter was told that she had ‘nigger boots’ on one day.”

In that case Rivers said he directly addressed the incident with the child’s parents and felt it was handled appropriately by them, so there was no need to alert the district.

“There’s also been reports with a teacher making a ‘nigger’ remark to a student,” he said. “The report is now that the teacher’s no longer here.”

Social media has also become a forum for racially-motivated remarks.

He said in the past he’s told his children to turn the other cheek when hurtful words were directed at them–in person or online–but he is now concerned about the district’s reputation as a whole, in addition to his children’s welfare.

“I want to know, what can we do…to get everybody on one page?” he asked the board. “I don’t want my school district tarnished with this type of reputation. We’re bigger than that, we’re better than that and I know we can do something about that.”

Superintendent Dr. Monica McHale-Small said the incidents Rivers referenced are “something we are aware of.”

“We are also putting together a committee that’s going to be steering that work” which will include teachers, administrators, students, parents and community members, she added.

McHale-Small highlighted the fact that Saucon Valley is one of 11 Lehigh Valley school districts participating in the recently-formed Greater Lehigh Valley Consortium for Equity and Excellence–a group that meets monthly to promote a process to address equity issues. 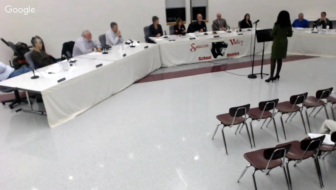 Parent Serema Ohene of Lower Saucon Township echoed Rivers’ statements in addressing the board about race-related issues she said her family has faced since moving to the Saucon Valley School District from New York five years ago; a move to what she thought would be a “quiet” area.

Instead, she said, they discovered they had moved to an area “where there’s so much racism going on.”

Ohene noted that a racially-motivated remark can provoke aggressive behavior in the targeted student, and although she didn’t defend a violent response, she said the “origin of the mechanism” should be examined in the wake of a fight, such as one that reportedly occurred after a black high school student was allegedly harassed by a white high school student at the Homecoming Pep Rally in October.

Ohene said she has heard of students making remarks such as “when I pass by Allentown it’s like passing by Niggerville.”

Black students have also been harassed when drinking from a water fountain, by being asked “Are you drinking from the right fountain?” she said.

When her child lost a lunch bag, Oheme said a teacher said, “Black people have nothing to steal from.”

She said that experience was “very traumatizing” for her child.

“Why would adults even be doing that?” she asked.

Oheme, who said she believes the students who are racially harassing other students have learned their behavior at home, urged the board to come up with a comprehensive plan to deal with the race-related issues “before someone gets hurt.”

McHale-Small said the district has “zero tolerance” for the types of issues discussed “in that incidents that are reported are investigated and they’re dealt with.”

However, she said “most of the literature coming out and the recommendations are you don’t want to automatically expel or suspend–I’m not saying we don’t–but you don’t want to automatically do that because these are children, and just as the previous parent had relayed to us, children are learning these things from somewhere, and it’s our job as educators to help them unlearn things that are not positive and learn things that are more positive. So when these incidents are brought to us, like we said, they’re investigated, restorative conferences are held, parents are talked to, students are talked to–you talk through the incident and help the student to understand.”

In one particular instance, McHale-Small said a student who was flying a Confederate flag “really didn’t understand what that meant to some people because no one had ever questioned it or discussed it with him.” After she had an in-depth conversation with him about the flag, “he doesn’t fly it anymore,” she said.

School board solicitor Mark Fitzgerald said the flying of the Confederate flag is “a First Amendment issue” in which the school district and other government bodies are guided in what they can or cannot do by Supreme Court rulings on freedom of speech.

In response to parent Ronald Diggs’ question, Fitzgerald said “theoretically” a swastika could be allowed on school grounds because of the First Amendment and protected free speech.

However, the school’s policies on bullying could also come into play in that situation.

“Some things are just common sense,” Diggs said. “If a guy’s bringing up a swastika there’s just no way that should be an acceptable sort of thing in this society, with what has happened, and especially with the current situation.”

To watch video of the entire board meeting, click here.