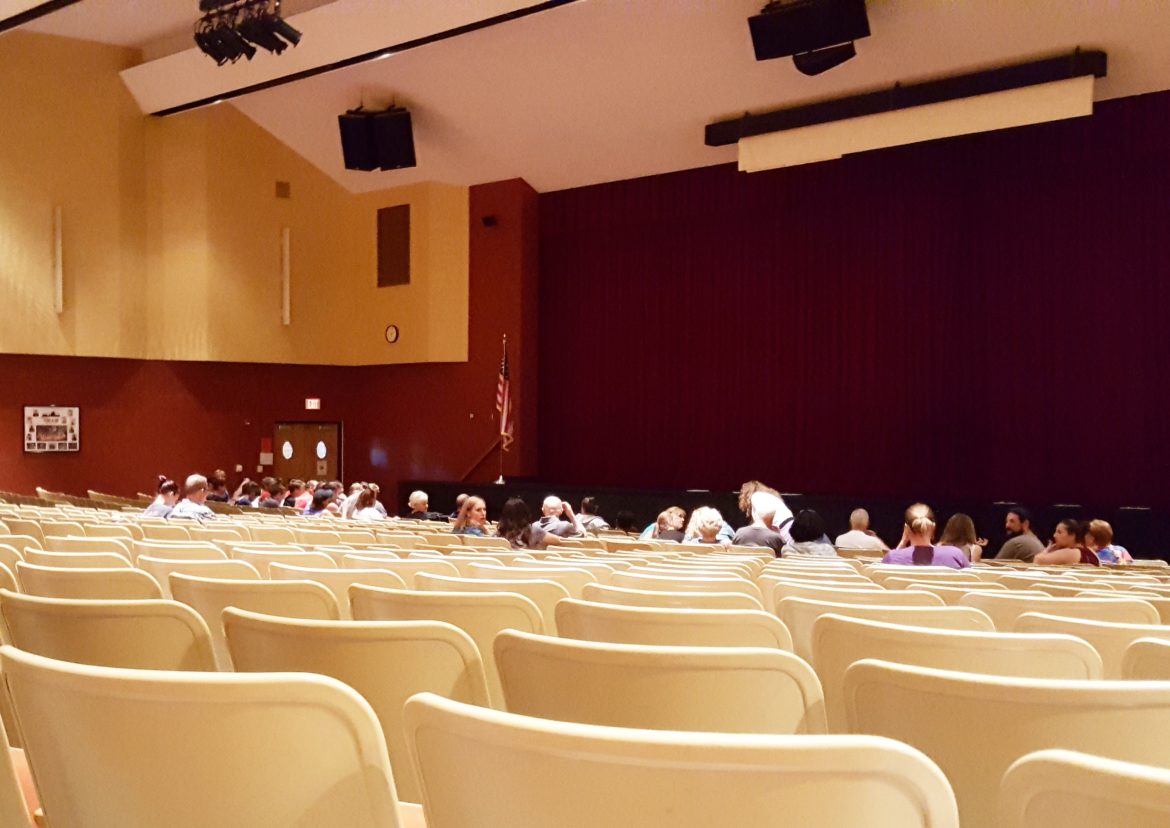 Editor’s Note: Saucon Source has learned it has been reported that the special school board meeting will be held Thursday at 6:30 p.m in the high school Audion.

A meeting in the Saucon Valley High School auditorium between ABC News staff, parents and students about a documentary currently under production did not go as planned Thursday night.

The meeting about the show–which will examine how racial tension in the district is being handled–was interrupted after Saucon Source publisher Josh Popichak refused to leave, citing his publication’s commitment to covering community news and unanswered questions about the documentary that have been asked by readers. 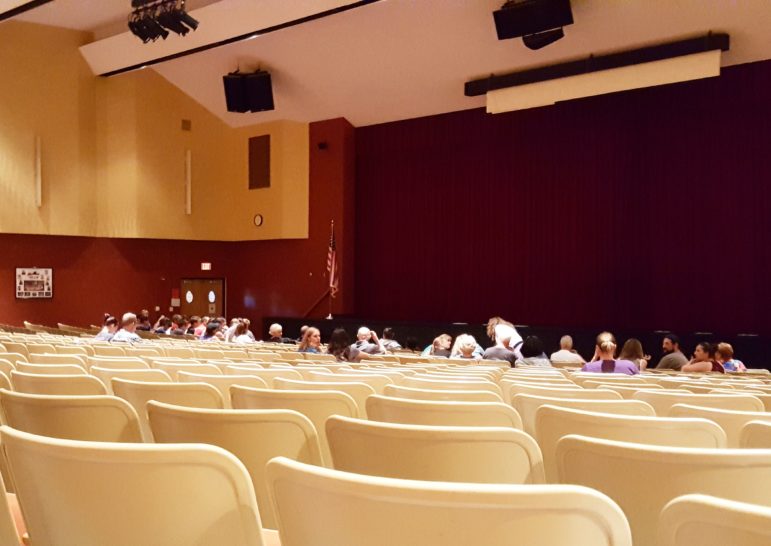 Inside the auditorium at Saucon Valley High School dozens of parents and students attended a meeting at which ABC News documentary producers were expected to answer questions Thursday. However, that didn’t happen.

Popichak was told by production staff–who wouldn’t allow themselves to be filmed–that he was not allowed to attend the meeting.

Several school board members, board solicitor Mark Fitzgerald and district staff also tried to force local media out, stating that the meeting was closed to the public.

The meeting was not advertised as a closed meeting.

Earlier in the day, in an email to acting district superintendent Dr. Susan Mowrer-Benda, Popichak was told questions such as who gave Lincoln Square Productions–ABC’s documentary division–permission to film in the schools would be answered at the 6 p.m. meeting.

That question and some others were ultimately answered by board members, though not necessarily to the satisfaction of all in attendance.

Lincoln Square Productions staff left the campus rather than address parents’ questions in the presence of other media.

The company has previously declined to comment on the documentary, citing its policy of not commenting on its programs that are currently in production.

School board member Sandra Miller said that at a similar meeting ABC News held Wednesday night, Morning Call and WFMZ news reporters were asked to leave, and that the same standards needed to be adhered to at Thursday night’s meeting.

Most parents however said they did not object to local media being at the meeting, and questioned why they wouldn’t be permitted to attend it.

“I have no issue with this documentary being made. Certainly there are issues and I don’t think there is one person in this room that denies that there are issues. What I take issue with is the fact that ABC wants to dictate who may or may not attend this public meeting, which is probably subject to the sunshine laws,” said Randy Yardumian. “The fact that it may or may not be subject to the sunshine laws is irrelevant, because if their intentions are rainbows and unicorns as they claim, then they should have no issue with allowing outside media sources in.”

Many parents wanted to know why they weren’t consulted about the documentary before the district gave ABC a green light to film it in schools.

Also criticized were the producers’ plans to film students on the first day of school Monday in light of a recent email sent to several hundred eighth and ninth grade students that threatened a school shooting.

Saucon Source has learned filming has now been postponed pending a special school board meeting to be held Thursday at 6:30 p.m. in the high school Audion.

In an email Friday, Mowrer-Benda said that instead of filming students Monday, “in the spirit of collaboration with the community, the Board supports that the documentary work will continue, but move in a different direction than originally planned for the opening day of school.”

“On the first day of school, the documentary team will not be filming within our hallways or classrooms, although the team will be working with building and central office administration,” she stated. “Any limited filming that does occur will be outside of the school.”

“We understand and have heard the concerns of some parents for the comfort and security of their students on the first day of school,” she added. “As a school district, we share the same concerns and goals for student well-being.”

As she did at the meeting Thursday, Mowrer-Benda also stressed that the investigation into the email threat is ongoing and unrelated to the documentary.

“As previously stated, the Saucon Valley School District, in partnership with the Lower Saucon Police Department, have acted upon the threat and continue to follow all prescribed protocols for student safety and security,” she said. “To this end, Lower Saucon Police will be present within and around our buildings on the first days of school. All faculty and staff have been made aware of the threat and buildings have reviewed all safety protocols.”

Several parents Thursday asked for a postponement of all filming until the email case is solved.

“With so many parents and children concerned and uninformed about the full intent, why not simply delay the filming until more information is provided and a full vote is conducted by the school board?” parent Eric Luftig asked after the meeting, reiterating the concerns he’d shared. “The board spends time discussing and voting (in public forum) on spending $2,000 to fix the track. Is this not equally or more important for our district–especially given the pending lawsuit against the district as well as the current, unresolved threat made against the students in our district last week?”

Parent Terry Smith asked the three board members present at Thursday’s meeting–Michael Karabin, Sandra Miller and Bryan Eichfeld–if the district is receiving compensation for the documentary.

Karabin said it is not, and Mowrer-Benda said grant funding is helping to pay for it.

Another parent had to ask several times what the educational benefit of the documentary production will be for students before he received an answer.

He was told they will be able to learn about documentary film-making first-hand through observation of and participation in the making of the hour-long program.

The district and producers have stressed that participation is voluntary and that students will only be filmed with parental consent.

School board president Michael Karabin– in response to a question about who signed off on the filming–said former superintendent Monica McHale-Small was approached by the producers and then presented their proposal to board members.

A formal vote on whether to allow the filming in the district was never taken, he said, because the district’s solicitor advised the board that one wasn’t necessary.

An agreement allowing the producers to film on school grounds was signed, and several parents questioned why their input wasn’t solicited before that happened.

“Are there any provisions within it that prevent the district from postponing or outright canceling the internal filming from taking place?” asked Yardumian.

A minority of attendees at the meeting spoke in favor of the documentary, citing their own experiences dealing with bigotry and the fact that Saucon Valley School District is taking proactive steps to combat discrimination as two reasons it should be welcomed by the community and allowed to continue in schools without interruption.

Ron Salmon said the documentary will be filmed with or without participation by the district, and that not participating in it now would cast the community in a negative light. Other parents, however, disagreed with his assertion.

Salmon was also at Wednesday night’s meeting, according to a Morning Call story.

The Morning Call reported that shouting could be heard outside the auditorium Wednesday, and Karabin admitted Thursday that the earlier meeting didn’t go as he had hoped it would, with producers unable to give their full presentation due to the amount of rancor from a much smaller group of parents.

Another concern voiced by several parents at Thursday’s meeting was whether the documentary could damage the area’s image if it is edited in a way that makes it appear as though the area is a center for racism.

Some parents expressed skepticism that the documentary would be objective, and that filmmakers would not attempt to emphasize racist attitudes held by a minority of residents to make it appear as though the area is a unique hotbed for hate.

Board members–responding to a question about the district’s right to review the documentary–said they will not have the opportunity to review it and/or suggest changes to a final edit before it airs.

One parent said she is concerned about how the show could potentially negatively impact students applying to colleges if Saucon Valley is portrayed in a way that results in widespread negative perceptions of the community.

Several football team members also shared their views and said they are already sensitive about how their school district is perceived outside the Saucon Valley.

After the meeting, several parents who spoke in a small group outside the main entrance to the high school asked each other, “How can we stop this (production)?”

Opinions varied, but several said they are interested in seeking legal representation and possibly a court injunction in order to attempt to postpone or halt the filming.

To learn more about who first made contact with Lincoln Square Productions and when that happened, Saucon Source plans to file right-to-know requests for the signed agreement and any staff emails in which it was discussed.