Note: The following is a news release from the Office of the Bucks County District Attorney.

Bucks County this week filed suit against major manufacturers and distributors of prescription opioids in an effort to stanch the flood of addictive medications into the community and to recover damages for the devastating losses–human and financial–caused by the opioid epidemic.

A 159-page civil complaint filed May 29 in the Bucks County Court of Common Pleas seeks an undetermined amount of compensatory and punitive damages from 17 corporate defendants and one individual alleged to be responsible for the deadly and costly wave of opioid addiction currently afflicting the county.

“While you can’t put a price or a value on human life…we the County do think we can put a price on the collateral costs of dealing with this epidemic right here in Bucks County,” commissioners Chairman Robert G. Loughery said at a news conference announcing the suit. “We want to take a stand against this epidemic, and this scourge on our families.”

Among the defendants are 14 corporate entities that include the largest producers of prescription opioids–led by Purdue Pharma, creator of OxyContin, a drug which has claimed roughly 30 percent of the market for analgesic painkillers and annual national sales of up to $3.1 billion. 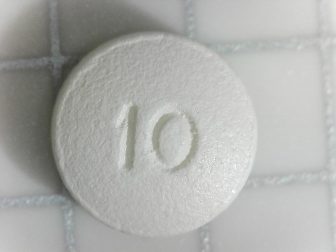 Also named as defendants are three corporate distributors–McKesson Corporation, Cardinal Health Inc. and AmerisourceBergen Drug Corporation–that claim up to 85 percent of the market share for prescription opioid distribution in the United States.

The sole individual defendant is John Kapoor, founder and former CEO of Insys Therapeutics Inc., manufacturer of Subsys, a fentanyl-based spray medication. Kapoor is among six Insys corporate officials charged in a federal racketeering indictment in Boston for allegedly paying kickbacks to doctors for prescribing Subsys.

“Just as nearly every citizen has been touched by the opioid epidemic, virtually every county office has been harmed and damaged,” said attorney Joshua D. Snyder of the law firm of Boni, Zack & Snyder of Bala Cynwyd, which is acting as local counsel in the lawsuit. “We intend to seek justice for Bucks County, and prosecute this case vigorously through trial if necessary.”

Snyder’s firm is working with Scott+Scott Attorneys at Law, a national firm representing government entities in similar litigation in several states. Loughery said the attorneys are working on a contingency basis, meaning the county is not charged up-front for their services, but that the lawyers will be paid a percentage of any damages awarded to the county.

The lawsuit alleges that the manufacturer defendants misled the public about the dangers of prescription opioids, and that the defendants responsible for distributing opioids into the community disregarded their obligation to monitor distribution and halt any “suspicious sales” to protect the community from an exorbitant flood of opioids.

“A pharmaceutical manufacturer should never place its desire for profits above the health and well-being of its customers,” the complaint states. “…A pharmaceutical manufacturer has a legal duty to tell the truth when marketing its drugs and to ensure that its marketing claims are supported by science and medical evidence. A pharmaceutical distributor of controlled substances has a legal duty to conduct its business lawfully and carefully and in a manner that does not irresponsibly and unreasonably saturate a community with opioids. An executive of a pharmaceutical company, such as the Individual Defendant, has a legal obligation to ensure that his company conducts itself in a manner compliant with the law that is designed to protect rather than harm patients.”

Bucks County has been hit hard by the resulting opioid epidemic. It is now estimated that 80 percent of street-level heroin users in the United States began their addictions through the use of prescription pain medication. The fallout here has been staggering.

Fueled by the opioid epidemic, the complaint alleges, overdose fatalities in Bucks County reached 232 last year, an 89 percent increase over 2015. The collateral costs of dealing with such widespread addiction have left the county strapped on many fronts.

This array of financial hardships includes, but is not limited to:

“Virtually every department within Bucks County (including the Health Department, Social Services and Economic Development) has been impacted, and forced to incur additional expenses year after year to try to mitigate the devastating impact of the opioid epidemic to Bucks County residents,” the complaint states. “…Through their promotion, marketing and distribution of opioids for profit, all Defendants created a public nuisance in Bucks County.”

Speaking at the news conference, County Commissioner Charles W. Martin said opioid addiction “not only impacts county government to a great degree, but it impacts local government–police, fire, EMS… I think we have done the right thing” in taking legal action.

District Attorney Matthew D. Weintraub said his office’s prosecutions “are dominated by drug-fueled crimes. We started a six-man Drug Strike Force, thanks to the commissioners, solely to combat this epidemic… This lawsuit, frankly, is about accountability.”

Loughery noted that Bucks joins many communities in this region and across the nation that have filed such legal actions against the opioid industry.

“I believe the more that this pressure grows, that we will be victorious at some point,” he said. “How long that’s going to take, I can’t tell you. But doing nothing isn’t really an option for us.” 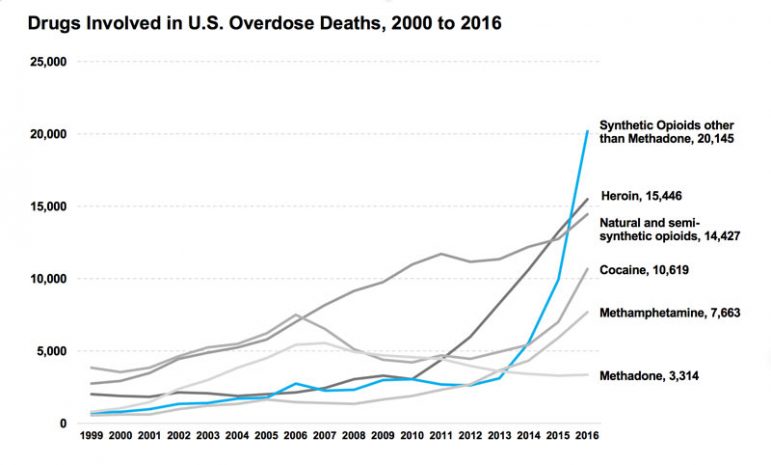 U.S. yearly overdose deaths, 1999-2016, and some of the drugs involved. Among the more than 64,000 overdose deaths estimated in 2016, the sharpest increase occurred among deaths related to fentanyl and fentanyl analogs (synthetic opioids in the chart), with over 20,000 deaths. Source: National Institute on Drug Abuse and Centers for Disease Control (CDC) statistics. (Public domain image)