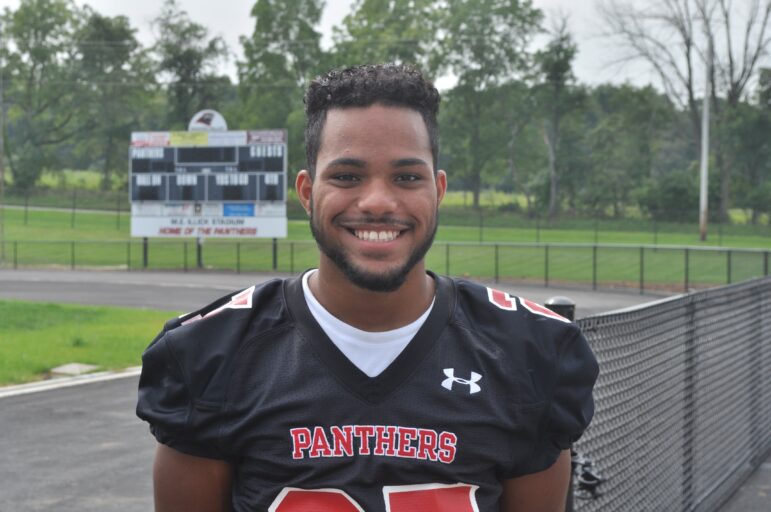 Embracing the underdog role, the Saucon Valley Panther football team overcame preseason skepticism and defeated the Southern Lehigh Spartans 27-13 on Friday night. Not only did the Panthers put the rest of the Colonial League on notice that they are still a team to be reckoned with, but they may have eliminated Southern Lehigh’s hopes for a Colonial League championship.

Along the way to blowing up Southern Lehigh’s 2018 title dreams, Panther senior linebacker Kelvin Gallard blew up the Spartans attempt at a “tunnel screen” late in the 2nd Quarter on Friday night. This defensive heroism earned Gallard our first “Krunch Time!” award of the season. When asked, both Coach Sams and Panther defensive coordinator Tony Frey referenced this particular play as being “Krunch” worthy.

Gallard (#27) is lined up at outside linebacker just inside the hash-marks toward the bottom of the screen. As Kelvin reads pass on 3rd & 10 and begins his pass drop, it looks like he observes a screen pass developing due to the Southern Lehigh offensive linemen releasing downfield to block. Gallard quickly reacts up field and hits the Spartan receiver just as he catches the football for a 2-yard loss.

In recognition of this “Krunch Time!” award, the Culinary Experience & Catering is rewarding Kelvin with a $12 meal voucher to be redeemed at the next Saucon Source Post-Game Tailgate Party at the Waldheim Beethoven Club on Friday night, Sept. 7.

Great job Kelvin, the Source is with you!