It’s never a good idea to discount the underdog. And that’s exactly what the Northwestern Lehigh Boys Soccer team discovered Thursday night. Northwestern has won the title the last three years making them the three-peat champion heading into the game.

Confident in their 59-game winning streak, it was evident that they were counting on bringing home the trophy again as they took the pitch. The last time these two teams met was during league play. Northwestern won 2-0. And they thought they could do it again. But they didn’t count on the determination of the Saucon boys.

Saucon had last won the District title in 2014 and they were determined to take the title back from Northwestern. They were the underdogs. They had nothing to lose. They wanted to win, or at least go down fighting.

The atmosphere was tense in the Emmaus stadium as fans watched the players from each team try to get to the ball first. The play was fast and furious on the turf and as it always does with this team, it got physical.

The stands were filled with fans there to cheer the teams on. Jamie Fowler, who coached most of the seniors in Saucon Valley’s Youth Soccer League, said of his former players, “They look great. They have lots of good energy.”

With less than three minutes remaining in the first half, a Northwestern player pulled sophomore Colin Zyck down in the box, giving Saucon a perfect scoring opportunity with a penalty kick. Junior Zack Mikuta took advantage of the opportunity and put Saucon on the scoreboard in what would end up being the only goal of the match.

There is a saying, “Offense wins games, but defense wins championships.” This was definitely the case in this hotly-contested match.

When Northwestern took the field in the second half, they were determined to score and catch up to Saucon, but their offense was no match for Saucon’s defense. Since Saucon was up by one goal they started to play much more defensively. Play in the second half occurred mostly in Saucon’s half of the field. Northwestern had many shots on goal, but they either couldn’t get past Saucon’s strong defense or their stellar first-year goalkeeper, senior Sean Cyphers. Cyphers was arguably the MVP of the game, making numerous saves. Northwestern didn’t give up and played their typical fast, physical game until the clock ran down to 0.

As soon as the game was over, the entire team ran onto the field to celebrate. The roar of the crowd of Saucon fans was defeaning.

Goalkeeper Cyphers was understandably excited about the win. He said, “My teammates and I have worked so hard for this. Day after day of practices. I knew we would come out on top because we are like a family.”

Cyphers went on to point out that the last time Northwestern lost in districts was in 2014 to Saucon Valley. So this is a true rivalry, which makes the win that much sweeter.

Head Coach Tim Houghton said, “It’s about time. I’m thrilled for the players. It was all them. They dug as deep as they could dig and they did it.”

Action in front of Saucon’s net. 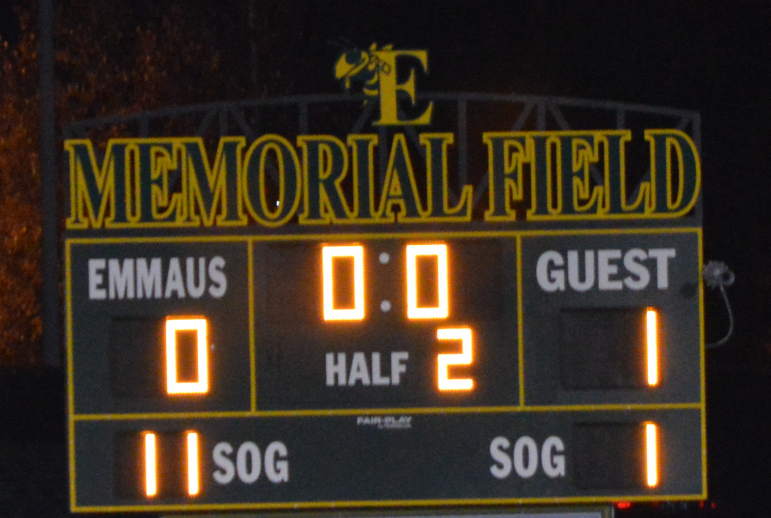 The senior members of the team.

The smile on Ashton Gonsalves’ face says it all. 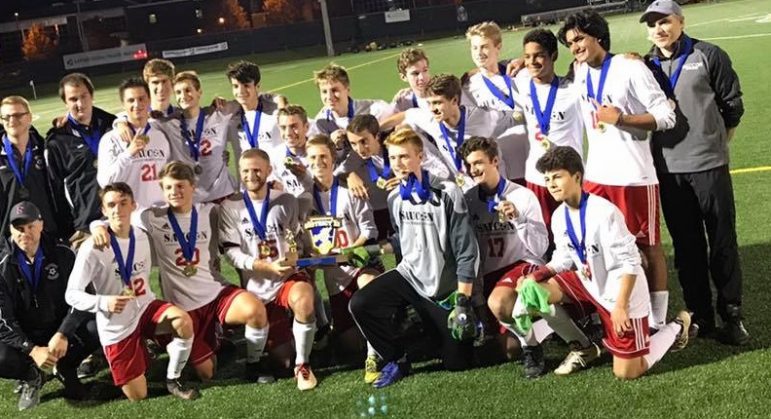