If you’re a property owner in Lower Saucon Township, you can expect to pay more in fire tax next year if the 2019 preliminary budget approved by township council Wednesday is adopted next month. 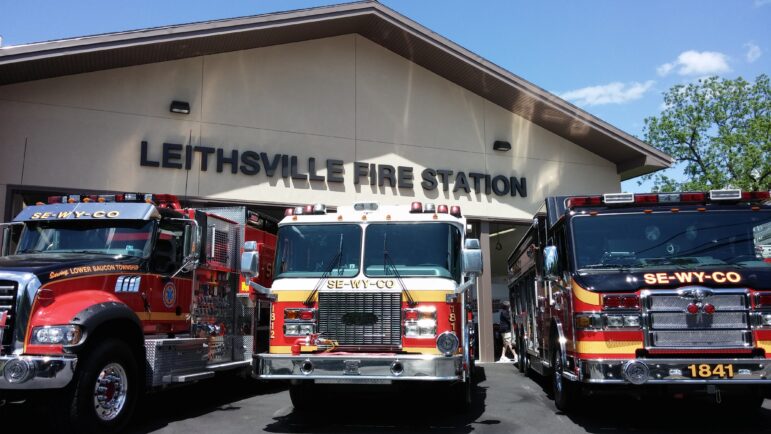 Fire trucks are parked in front of the Leithsville fire station in Lower Saucon Township in May 2014 (FILE PHOTO).

The increase in the fire tax would bring the total township millage rate to 6.39 mills (from the current 5.89 mills) and bring in about $430,000 in additional revenue for the township, which is in the process of trying to increase its financial reserves as it plans for the eventual budgetary impact of IESI Bethlehem Landfill’s closure, finance director Cathy Gorman said.

Councilman Ryan Stauffer asked Gorman why the original version of the 2019 budget that was brought before council didn’t include a fire tax hike.

“We are addressing our debt,” Gorman told him. “We are investing in our capital fund with that money…(and) hopefully by the time the landfill does close we’ll be in decent financial shape.”

The landfill operation has been a signficant source of revenue for the township for many years in the form of host fees that it pays annually.

The additional revenue from the fire tax will also benefit the township’s volunteer fire companies, who will need to purchase new apparatus in the future. However, council members were quick to point out that any money brought in by the tax hike shouldn’t necessarily be earmarked by those companies for specific future needs.

“That money going into the account…doesn’t mean that there’s a truck ordered tomorrow,” he told council.

The township is currently in the process of developing a policy that will delineate the township’s responsibility in terms of providing funding for the fire companies’ equipment purchases.

Councilwoman Donna Louder suggested that there should be a 75 percent-25 percent split, with the township providing the larger amount of funding.

Council president Sandra Yerger said her belief is that such a split once existed, at least informally.

“I think that looks fair all around,” Louder said. She advised the fire company officials who were present at the meeting that “no money is to be expended until a policy is in place.”

“Obviously as the president I would always like to see more (funding provided by the township),” he said, noting that if the company has to purchase a $1.2 million truck, that would mean they would be responsible for coming up with $300,000 to put toward it.

“That’s a large sum of money,” Gress said, noting that fundraising efforts by the fire companies don’t yield the income that they once did. “We will take every penny we can get,” he added.

During the budget discussion, council also passed a motion approving a 2 percent pay increase for the township’s non-contract employees next year.

A motion to approve the draft 2019 township budget–balanced at $12,105,098–was also approved unanimously.

The budget will now be available for public inspection for a period of 20 days, with council scheduled to vote on its adoption at its Dec. 19 meeting.