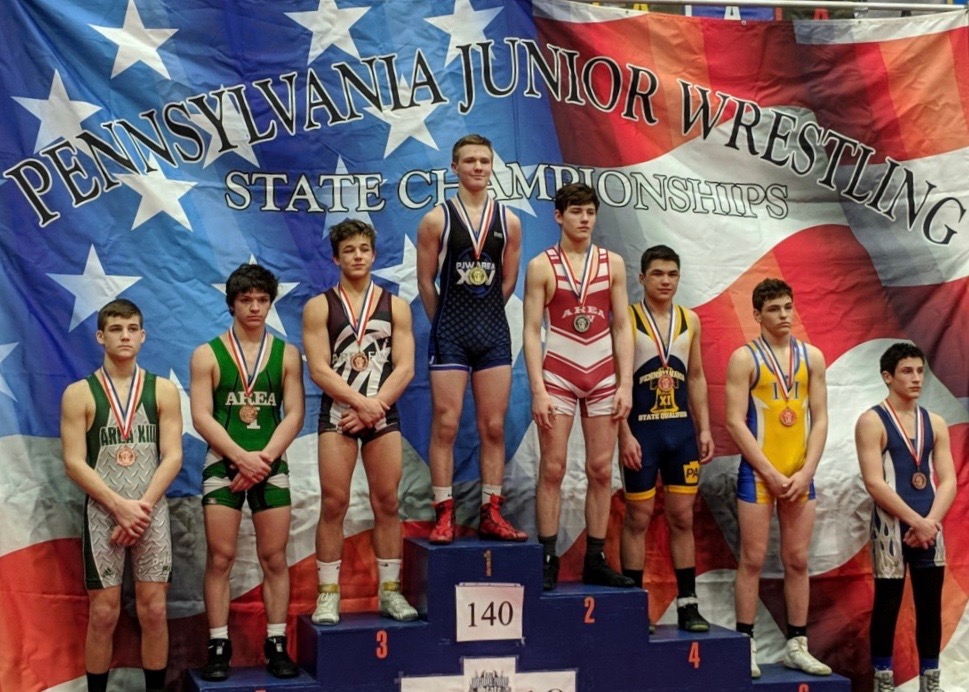 Last weekend Saucon Valley eighth grader, Jake Jones made the trip to Johnstown, Pennsylvania to compete in the 2019 Pennsylvania Junior Wrestling State Championship.  Jones steamrolled the 140-pound field with a couple of pins, a couple of major-decisions and a controlling 8-1 decision in one of the early rounds.  Jake Jones has now earned the title of PJW State Champ.  He is the first Saucon Valley wrestler to ever win a PJW junior-high state title.

The last wrestler to come through the Saucon Valley ranks and win a PJW State Championship was Brandon Palik in 2004.  Palik competed in the 11-12 year old youth division at 160 pounds.  As a Panther, Palik went on to win a PIAA  state title in 2009 at the 215 weight class.

Jake’s trail to the PJW podium! 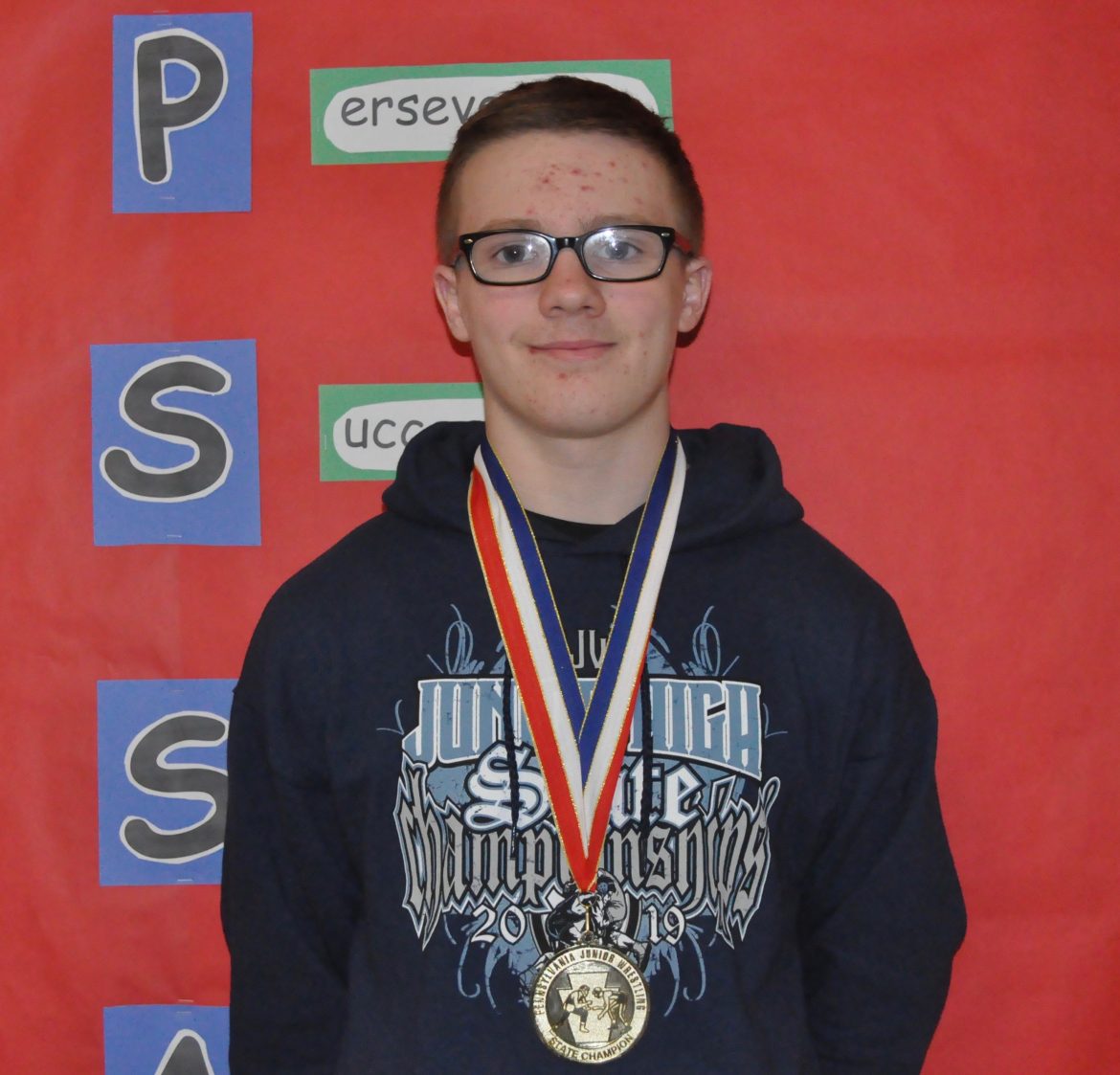 “I don’t think me winning a state title has sunk in yet.  Like, it’s crazy to think how I dreamed of winning a state title ever since I was five years old and pretending to wrestle in the state finals with my brother Jason when I was younger.  It was all a dream and that dream came true.”

Jake comes from a “wrestling family”.  He is the son of Saucon Valley’s Karen and Mike Jones, and the youngest brother of Josh and Jason.  A 2018 graduate, Jason is Saucon Valley wrestling’s all-time wins leader with 156.  Jason finished 7th in the PIAA state tournament last season and is currently wrestling at Keystone College.  Josh finished 2nd in last year’s PIAA state championships as a junior and has his eyes set on the gold this weekend at Hershey.  A senior who currently lays claim to 150 wins, Josh will be continuing his academic and athletic career next year at George Mason University.

As if two older brothers are not enough to shape Jake’s wrestling ways, 1999 Saucon Valley graduate and 3 x PIAA state qualifier Dave Stauffer is the Jones boys’ uncle.  A highly decorated wrestler, Stauffer had 125 wins for the Panthers and finished 3rd on the podium in the PIAA state tournament as a senior.  He went on to wrestle at Drexel University.  Surely, “Uncle Dave” has a little grappling influence on Jake and his brothers.

No matter what helped pave Jake’s way to this state title, it is an accomplishment that he will always treasure.  And, looking forward, there seems to be a very good chance that this will not be the last of Jake’s wrestling successes! 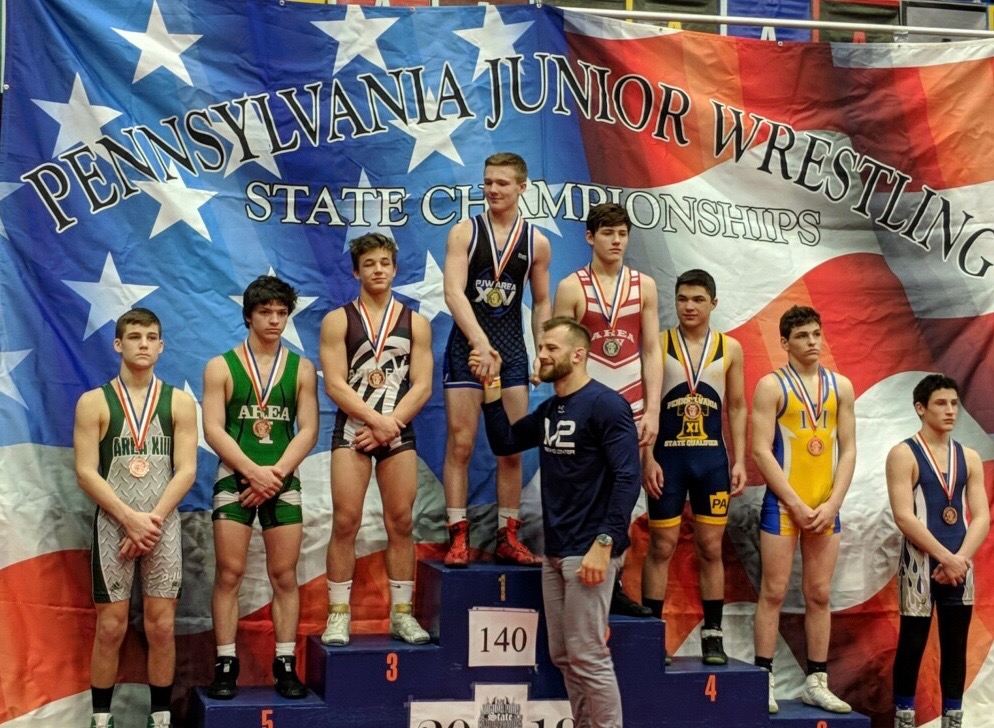 Congrats Jake, the Source is with you!