District superintendent Dr. Craig Butler said Monday that the grant will be used to pay for an improved security/surveillance system, handheld radios, a school safety/security survey/analysis and hazards training for the entire faculty and staff.

“We are absolutely ecstatic about receiving the grant,” Butler said. “It will allow us to implement some substantial improvements in our efforts to provide for a safe and secure environment.”

According to a news release from Simmons’ office, the funding was made available through a new $60 million grant program created as part of a comprehensive school safety bill that was included in the 2018-2019 state budget.

Other local school districts in Simmons’ district that are grant recipients are:

The United Way of the Great Lehigh Valley was also awarded a safety and security grant in the amount of $330,431, according to the news release.

“The 17-member School Safety and Security Committee within the Pennsylvania Commission on Crime and Delinquency was created as part of Act 44 of 2018,” the news release said. “One of its duties is to help distribute funding through the two-phase grant program.”

In the first portion of the grant program, which was awarded late last year, each school district that applied received $25,000 for safety initiatives, including school security assessments, security equipment, training and to hire school resource officers.

Southern Lehigh School District received a $20,000 grant for an anti-violence program in that first round of grants, which were distributed at a time when some districts were contemplating hiring school resource officers; something Saucon Valley School District to date has not opted to do.

The security grants awarded last week represent the second phase of the program were competitive. 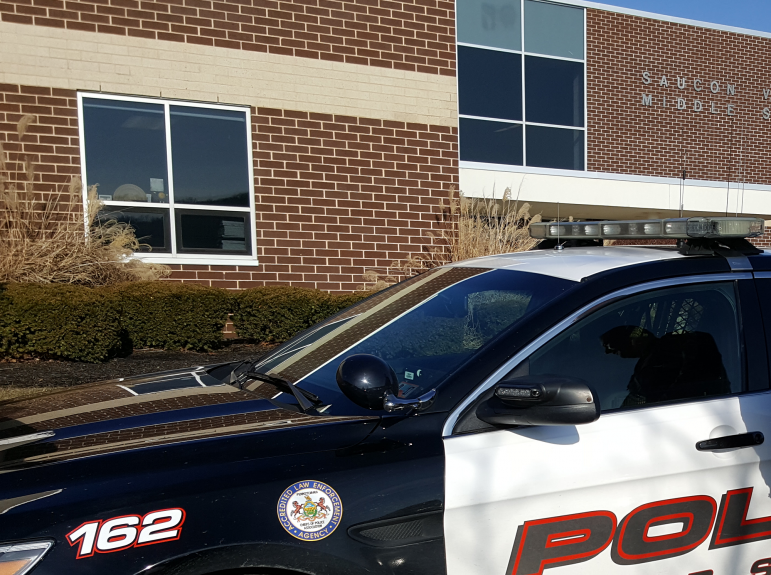 A Lower Saucon Township police cruiser is parked outside one of the entrances to Saucon Valley Middle School in this 2016 file photo. The police department is responsible for helping ensure the safety and security of students and staff on the district’s campus.